A former fitness competitor who had a £5,000 boob job to boost her confidence has been left in agony by implants that have now been recalled due to a cancer link.

Kate Michalkova, 44, increased her A-cup chest to a 34D after breastfeeding and intense physical training left her with ‘non-existent’ boobs.

They looked ‘amazing’ and gave her the confidence to enter and win a number of fitness competitions.

But after four years she was hit by a cocktail of crippling symptoms, including joint pain, dizziness, headaches and muscle weakness.

Eventually, Ms Michalkova, from Cheltenham, Gloucestershire concluded her mysterious illness was breast implant illness (BII) after reading about it online.

The mother-of-two said they have destroyed her body and the pain is ‘killing’ her, now needing to save up thousands of pounds to have the implants removed.

In another blow, the manufacturers of her implants, Allergan, recalled their product worldwide last month due to alleged links to cancer.

Hundreds of women have been left with the implants inside them.

Kate Michalkova, 44, who had a £5,000 boob job to boost her confidence has been left in agony by the implants that have been recalled due to a cancer link 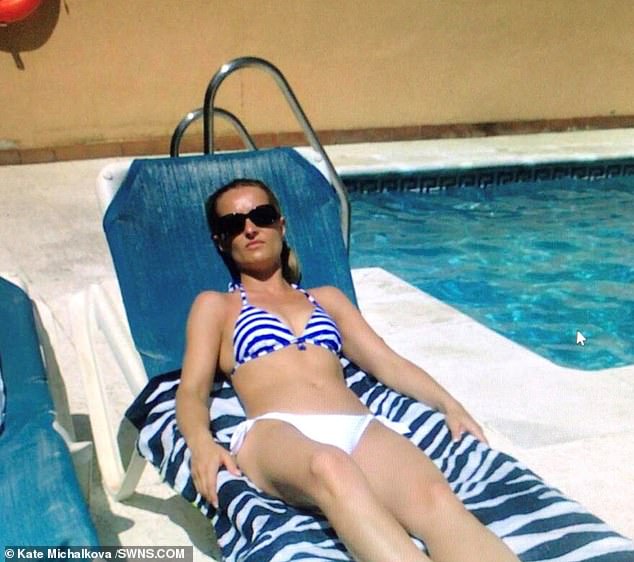 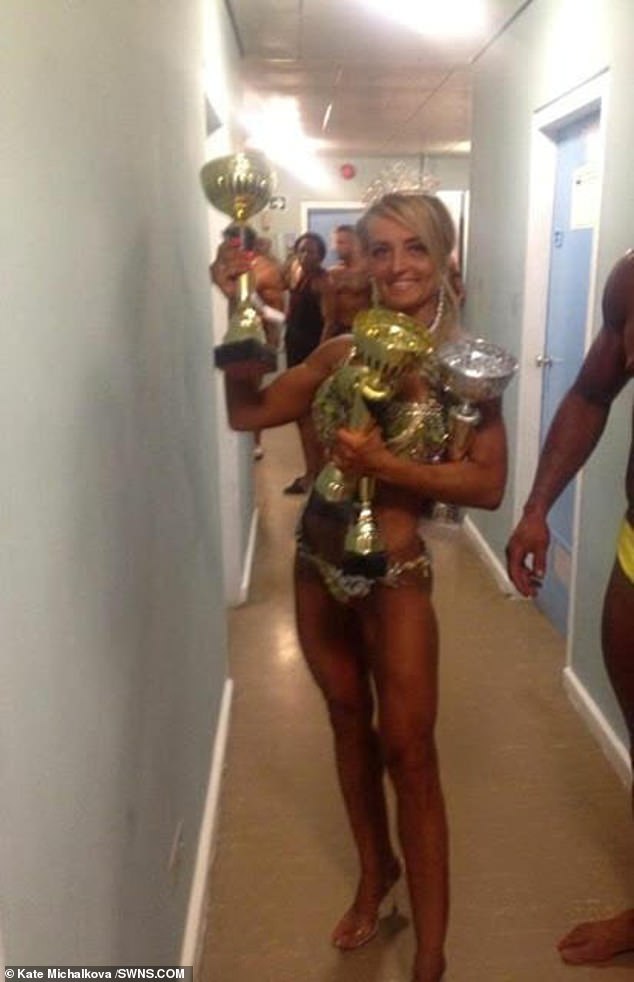 Ms Michalkova said her implants looked ‘amazing’ and gave her the confidence to enter and win a number of fitness competitions, some of which she won (pictured)

BII, which can cause cognitive and auto-immune problems, is not recognised as an illness by the NHS.

But thousands of women with implants have reported symptoms like Ms Michalkova, who is now saving up to have hers removed.

The daily agony for the past three years has cost Ms Michalkova her full-time job as a personal trainer and she can no longer compete in bikini fitness competitions.

Ms Michalkova, who is mother to Lucy, 19, and Daniel, 12, said: ‘I’m devastated that my implants have done this to me.

‘I opted for the safest ones possible, and yet they’ve completely destroyed my body.

‘I have been begging doctors for help for years and none of them connected my pain to my breast implants.

‘It wasn’t until I saw people talking about it on social media that I even heard of the illness, and after joining a Facebook group of women suffering just like me, I finally felt like I wasn’t alone.’

Ms Michalkova was in the greatest shape of her life when she went under the knife in December 2012.

She believed textured implants were her safest bet because they are used to reduce the risk of the capsule rupturing or moving out of place. 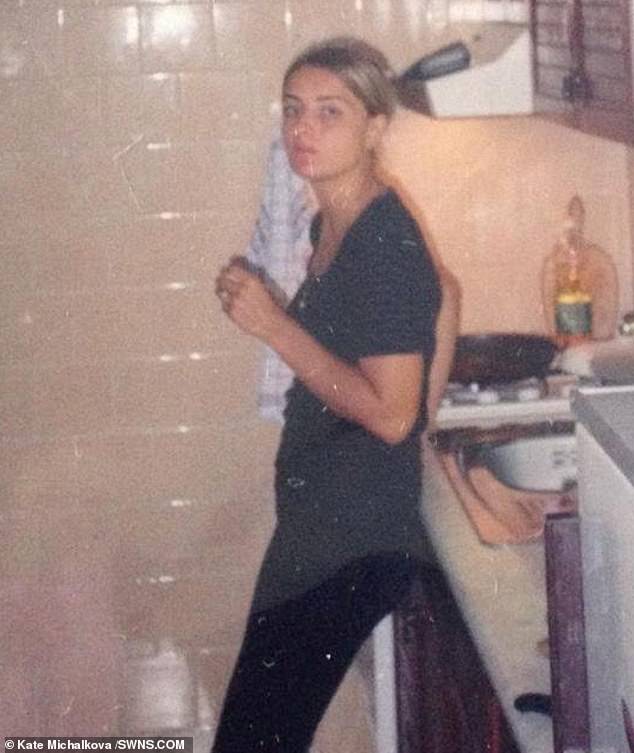 Ms Michalkova got her new breasts in 2012 which gave her the confidence she needed to start entering fitness competitions in 2014. She is pictured before 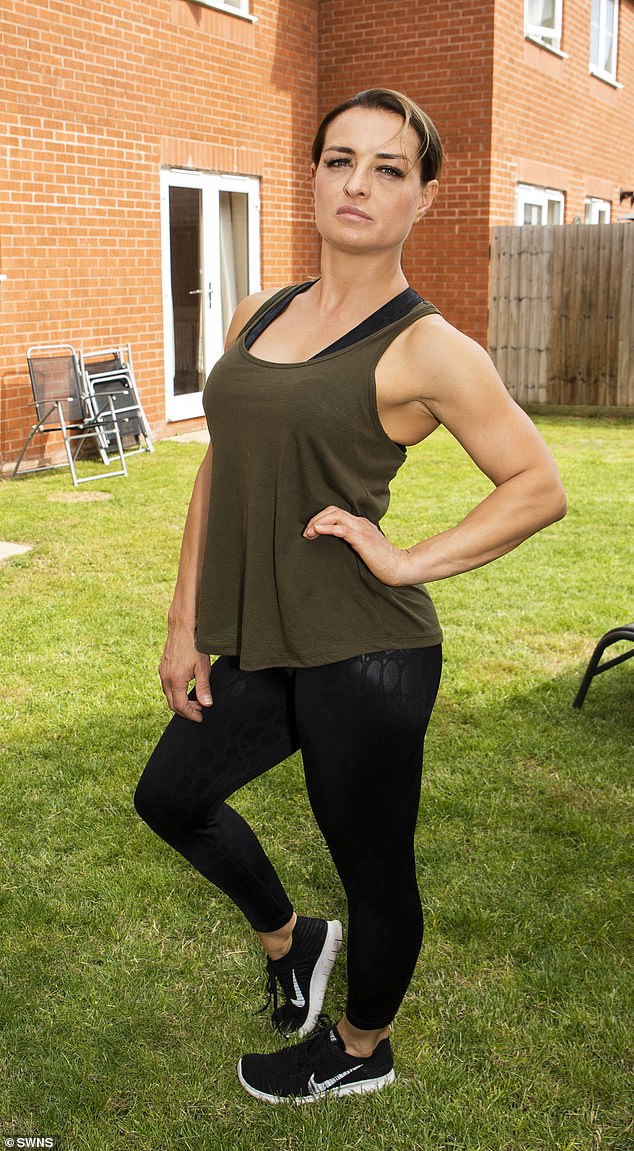 Ms Michalkova said she opted for the ‘safest implants’ but they had destroyed her body. She is pictured at her home in Cheltenham, Gloucestershire

She said her new breasts gave her the confidence she needed to start entering fitness competitions in 2014.

Ms Michalkova said: ‘Breastfeeding and training in the gym had made my boobs non-existent, and the breast implants helped my confidence soar.

‘I loved my boobs – they gave me the proportion I was after and looked amazing in fitness photo shoots.’

Ms Michalkova began experiencing symptoms of the illness in 2016, four years after her surgery.

She has suffered with chronic fatigue, anxiety, heart palpitations, headaches, irritable bowel syndrome and swollen lymph nodes for the past three years.

Desperate for answers, Ms Michalkova repeatedly visited doctors for help but could not find a solution for her constant pain.

She said: ‘Doctors didn’t know what to do with me. They sent me for screenings on my kidneys and liver, but it all looked normal.

‘My heart was monitored due to my heart palpitations and I was even sent to a gynaecologist to see if I was going through menopause.

‘They weren’t finding anything, but when I suggested breast implant illness could be the cause, I was completely dismissed. It’s so frustrating.’ 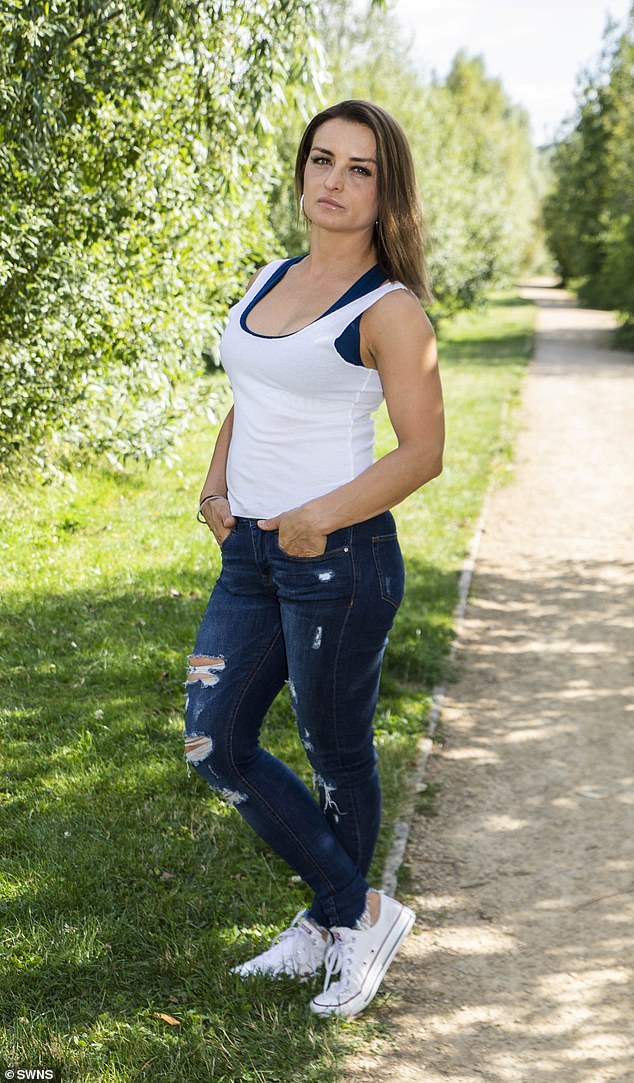 Ms Michalkova began experiencing symptoms of the illness in 2016, four years after her surgery. She has suffered with chronic fatigue, anxiety, heart palpitations, headaches, irritable bowel syndrome and swollen lymph nodes for the past three years 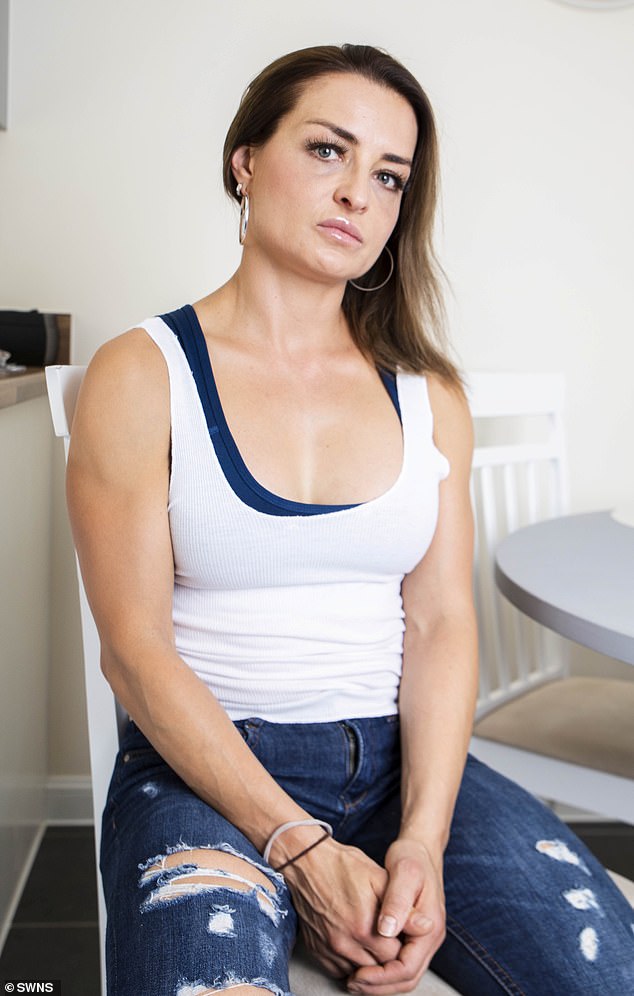 Doctors sent Ms Michalkova for tests to see if she was going through the menopause, and her heart palpitations were monitored. As breast implant illness took control of Ms Michalkova’s life, she was forced to stop competing in 2018 and give up full time work as a personal trainer

But as the illness took control of Ms Michalkova’s life, she was forced to stop competing in 2018 and give up full time work. She is now working part time as an online fitness coach.

Ms Michalkova is now saving up another £4,500 to have the breast implants removed in a private clinic.

She said: ‘I paid £5,000 for these implants, and now I have to save it all up again to get them removed just so that I can try to live a normal life without constant pain.

‘They still look beautiful, but they’re killing me and I feel like I have no choice but to have them removed.’

‘Breast implant illness is real and I suffered for years thinking I was on my own. Women need to know the risks of getting implants and that they don’t have to live in agony.’ 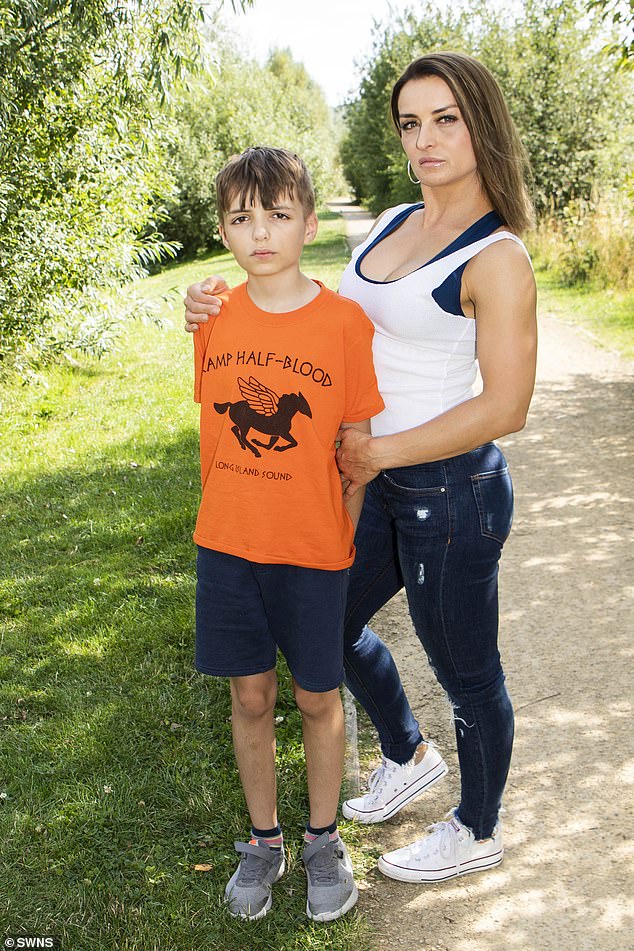 The manufacturers of her implants, Allergan, recalled their product worldwide last month due to alleged links to cancer. She is pictured with her son Daniel Lucas, 12 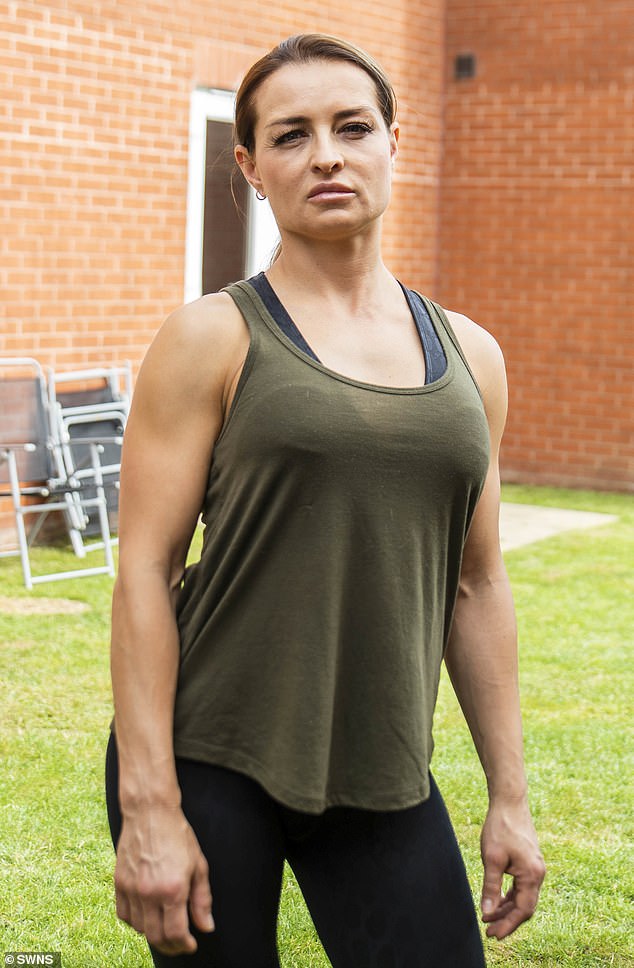 Ms Michalkova is now saving up another £4,500 to have the breast implants removed in a private clinic and hopes to be operated on in October this year 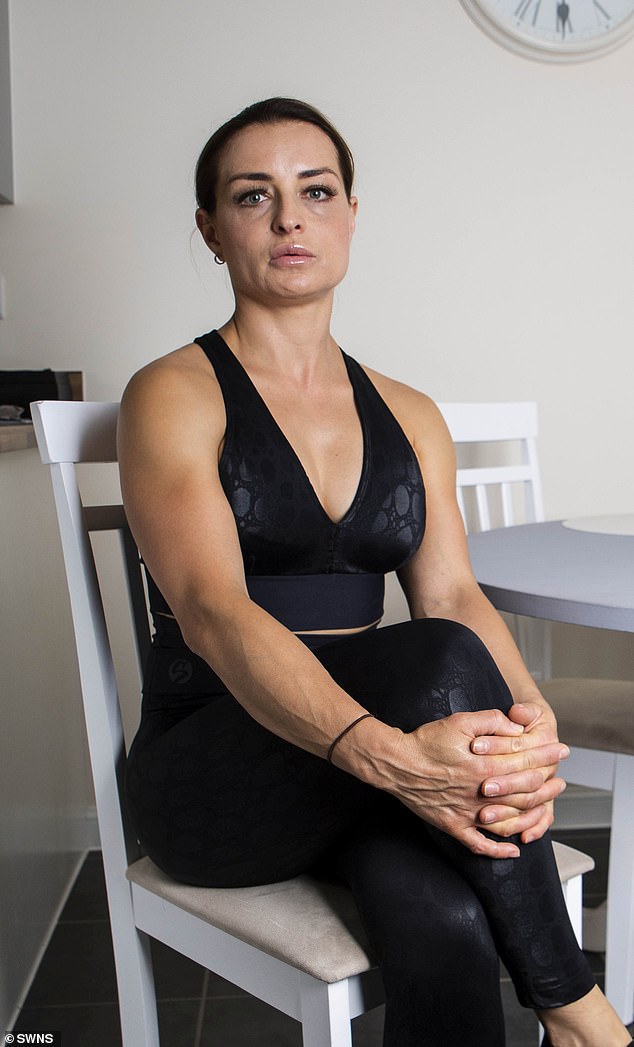 WHAT DO BRITISH AUTHORITIES AND SURGEONS SAY?

But the MHRA says there is not enough evidence of the link, nor enough cases, to withdraw the implants from use.

A spokesperson said: ‘While most cases of BIA-ALCL have been reported in patients with textured implants, there is currently not enough scientific evidence of a causal relationship specifically between textured implants and BIA-ALCL.

‘If you have any questions or have breast implants and notice any changes such as lumps, swellings or distortions in your breasts, neck or armpits, please speak to your surgeon or GP.’

The British Association of Aesthetic Plastic Surgeons (BAAPS) agrees with the stance and says it has told its members not to use Allergan’s macrotextured implants.

But in a statement BAAPS said: ‘Not all textured surfaces are manufactured in the same way and they appear to convey different levels of risk, hence it is difficult to draw definite conclusions at this time.

‘Hence many surgeons in the UK still advocate the use of textured implants for their patients.

‘It is vital however, that the risks of using textured or smooth surfaced implants are fully discussed with all patients prior to surgery so that patients can make informed choices.’

Last month Allergan recalled their Biocell textured breast implants due to an alleged link to a rare form of cancer.

Breast Implant Associated-Anaplastic Large Cell Lymphoma (BIA-ALCL) is a rare but highly treatable form of cancer that can develop around breast implants.

Symptoms include persistent pain and swelling around the breast implant, with fluid usually developing eight to tenyears after the implant has been inserted.

Ms Michalkova said: ‘Doctors warn you that you could die on the operating table, but nobody told me that my implants could be linked to cancer.

‘I have been suffering in pain with no help for years, just like many other women, and to now find out about this link to cancer is devastating.’

She hopes to have them taken out in October 2019 when she will also be tested for BIA-ALCL.

The global pharmaceutical organisation recalled the implants after the US Food and Drug Administration released information linking them to the rare form of lymphoma.

Links between BIA-ALCL and breast implants were originally identified by the FDA in 2011, but new information has pointed to a direct connection between Allergan’s products and significant patient harm.

The FDA said 573 cases of BIA-ALCL were recorded globally as of July 6, out of which 481 patients had Allergan implants at the time of diagnosis.

The UK regulator, the Medicines and Healthcare products Regulatory Agency, will not reveal exactly which implants have caused the 57 cases and one death from BIA-ALCL cancer in the UK.

The implants are no longer available in the UK because its CE mark expired, which means they cannot be sold in Europe.

Allergen did not want to comment on Ms Michalkova’s allegations, but in a statement on the recall, the company said: ‘Allergan PLC today announced a voluntary worldwide recall of Biocell textured breast implants and tissue expanders.

‘Allergan is taking this action as a precaution following notification of recently updated global safety information concerning the uncommon incidence of BIA-ALCL provided by the FDA.

‘The FDA and other health authorities have not recommended removal or replacement of textured breast implants or tissue expanders in asymptomatic patients.

‘Patient safety is a priority for Allergan. Patients are advised to speak with their plastic surgeon about the risks and benefits of their implant type should they have any concerns.’