Google’s former CEO has launched an energetic defense of U.S. web giants and warned against proposals to break them up.

Eric Schmidt praised firms such as Google and Facebook for bringing ‘innumerable benefits’ including ‘freedom for individuals’ and ‘the ability for people to speak out’.

In an interview with the Daily Telegraph he said he did not see a ‘basis in law’ for a breakup, hinting it could be illegal.

He also cautioned that Chinese tech firms were ‘outflanking’ their Western rivals and growing at a faster rate.

Among the controversies which have beset Google in recent years was a possible project – now seemingly shelved – to build a search engine in China which would comply with Beijing’s censorship rules.

Praising the role of tech companies, the former CEO insisted that ‘these platforms are enormously powerful and they are free to consumers’.

Mr Schmidt, 64, said: ‘I would be very careful about directly affecting the structure of the industry because the benefit of broad access to these platforms has brought innumerable benefits: education, healthcare, access, freedom for individuals, the ability for people to speak out.

‘The transparency that these platforms have provided is a global good.’

Democratic presidential hopeful Elizabeth Warren is among those who have called for firms such as Google, Facebook and Amazon to be broken up.

But Mr Schmidt said a breakup would cause a ‘negative consumer harm’.

Mr Schmidt is standing down from the board of Google’s parent company next month.

His defiant comments come at a time of growing cynicism about data gathering and online security.

They echo the optimism of the early Internet age when it was hoped that a wealth of free information would counter false claims and spread knowledge.

Instead, tech companies today – in particular Facebook – are widely accused of spreading fake news and hate speech on their platforms. 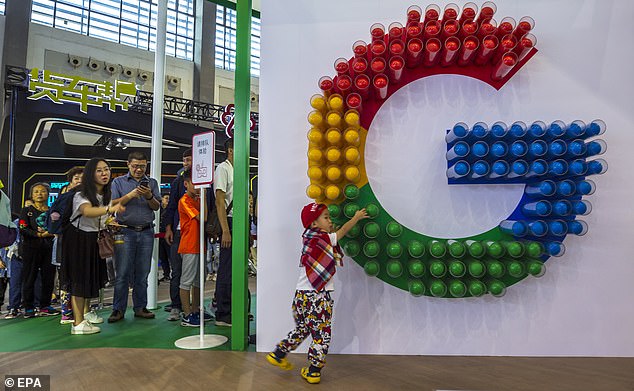 Firms such as Google (pictured, a Google booth at a trade fair in China last year) have come under scrutiny over data gathering

They are also under suspicion over the amount of personal data they gather about their users.

Last year a software bug was exposed in social network Google+ which meant that the personal information of ‘hundreds of thousands’ of users was apparently vulnerable.

The issue reportedly affected users on the site between 2015 and March 2018.

Google announced it would be shutting down the Google+ site permanently, partly as a result of the bug.

Mr Schmidt’s comments were published on the day that Google broke ties with Chinese tech giant Huawei in an escalating political and economic row between the two nations.

Following an order from President Trump, Google has blocked Huawei’s access to its Android operating software.

It means that future Huawei smartphones will not include apps such as Gmail and Google Maps. 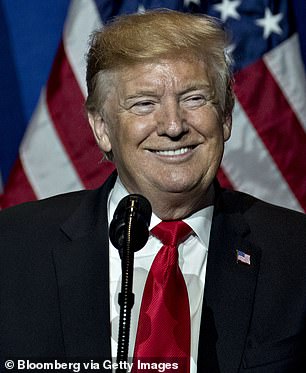 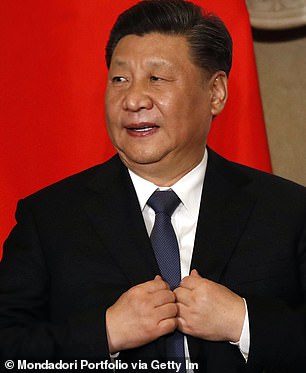 Following an order from President Trump (left), who is locked in trade dispute with China’s Xi Jinping (right), Google has blocked Huawei’s access to its Android operating software

Existing ones will still run the apps, but users will not be able to upgrade to newer versions of Android.

As a result, Huawei may be forced to use an inferior open-source version of Android, or attempt to build its own operating system.

Apple has done so successfully with iOS, but Microsoft’s foray into the market proved a disappointment and was shelved in 2017.

Last year it was reported that Google was contemplating a search engine customized to the Chinese market, named Dragonfly.

A former Google employee claimed it would be ‘tailored to the censorship and surveillance demands of the Chinese government’.

Jack Poulson also claimed that discussion of the plans among Google employees had been ‘increasingly stifled’.

Google has since abandoned the project but Mr Schmidt defended the idea earlier this month, saying the firm could help make China ‘more open’.

A BRIEF HISTORY OF ERIC SCHMIDT’S TIME AT GOOGLE

Schmidt is named CEO of Google, as early investors insist on bringing grown-up leadership to the rapidly growing company.

Google announces deal to buy YouTube, now one of the world’s most popular video sites.

Schmidt resigns from Apple’s board as competition between the one-time allies heats up.

Schmidt makes a surprise announcement that he’s stepping aside for Page to become chief executive. In a Twitter post, Schmidt writes, “Day-to-day adult supervision no longer needed!” Schmidt stays on as executive chairman.

Schmidt drops title of CEO and becomes executive chairman. In that role, he will serve as adviser and handle broader tasks such as business partnerships and government outreach – important as Google faces growing regulatory scrutiny in the U.S. and Europe.

Schmidt makes four-day visit to North Korea, a country with one of the world’s most restrictive internet policies. The visit takes place despite opposition from the U.S. government. Schmidt is accompanied by former New Mexico Gov. Bill Richardson and Jared Cohen, the head of Google’s innovation think-tank. Sen. John McCain, an Arizona Republican, calls the delegation “useful idiots” on his Twitter account.

Schmidt becomes executive chairman of Alphabet Inc., a new holding company formed in the separation of Google from projects, or “bets.”

Alphabet says Schmidt is stepping down as executive chairman. He will become a technical adviser and still sit on the board.