Former Google boss Eric Schmidt today blasted Huawei and accused the tech giant of handing data from its routers directly to the Chinese state to help its battle with UK and US spy agencies.

Mr Schmidt says the company wanting to help build parts of Britain’s 5G network had engaged in ‘unacceptable acts’ and should be considered a risk to national security.

The former Google boss, who is worth $15billion, now sits as chairman of the Pentagon’s Defence Innovation Board.

He added: ‘However that happened, we’re sure it happened’.

Former Google boss Eric Schmidt, speaking at the US National Security Commission on AI last year, has accused Huawei of being a threat to national security by handing data back to the Chinese government

Huawei’s UK chief  Victor Zhang has hit back saying: ‘It is simply not true. Huawei is a private company, 100% owned by its employees. Huawei is independent from any government, including the Chinese government’.

Huawei founder declares war on the West as he urges workers to ‘surge forward, killing as you go, to blaze us a trail of blood’ in battle for supremacy 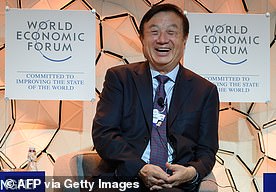 Tech-giant Huawei’s founder Ren Zhengfei told his staff to ‘surge forward, killing as you go, to blaze us a trail of blood’ in the battle for global supremacy

Tech-giant Huawei’s founder told his staff to ‘surge forward, killing as you go, to blaze us a trail of blood’ in the battle for global supremacy.

In February this year, Ren told staff that Huawei had ‘entered a state of war’ after the second-largest smartphone maker in the world found itself at the centre of a technology battle between China and the US.

Huawei earlier described the British government’s decision to allow the controversial company to develop its 5G mobile phone network as ‘just like the success of the Battle of Stalingrad, which was a turning point that reshaped the global landscape’, The Sunday Times reports.

But US President Trump has urged allies to ditch Huawei technology as it could allow the Communist Chinese government to hack vital telecommunication systems.

The company has said it is independent from the government and would not spy on unsuspecting users.

Ren’s military-like speech in 2018 came shortly after his daughter Meng Wanzhou, the company’s chief financial officer, was arrested following accusations that Huawei used a Hong Kong shell company to sell equipment to Iran in violation of US sanctions.

Mr Schmidt admitted he had developed prejudice against Chinese rivals while working in Silicon Valley.

He said: ‘I have carried the prejudices about China in my years working with them.

‘The Chinese are just as good, and maybe better, in key areas of research and innovation as the West.

‘They’re putting more money into it. They are putting it in a different way, it is state-directed in a way that is different from the West. We need to get our act together to compete.’

His intervention came days after the head of Nato has backed a review of Chinese telecoms giant Huawei’s role in Britain’s 5G network.

Jens Stoltenberg, the military alliance’s secretary general, said China was ‘coming closer’ to western nations through investment in critical infrastructure and in cyberspace.

But he warned that the country’s growing influence also posed a threat to ‘our values and our way of life’ and that Europe and the US ‘cannot ignore the consequences’.

Boris Johnson agreed in January to allow the controversial firm to help build Britain’s 5G network after intelligence agencies said the security risks could be mitigated.

He gave the green-light despite furious opposition from the US, including from US President Donald Trump himself.

Then, last month GCHQ, Britain’s eavesdropping agency, announced it was reviewing its advice on Huawei after the US slapped further sanctions on the firm.

Mr Johnson is expected to announce next month that the UK will phase out Huawei from its networks as quickly as possible.

Details of the talks came as the founder of Chinese telecoms firm Huawei declared a ‘state of war’ against the West, according to a leaked transcript of a conversation with employees.

Ren Zhengfei, an ex-army engineer who close links to the heart of the Communist Party, also urged workers to crush rivals and ‘blaze a trail of blood’.

He ordered staff at the company’s research and development centre in Hangzhou, eastern China, to learn from Google’s achievements.

Speaking a month after the arrest of his daughter in Canada in 2018, he said: ‘Surge forward, killing as you go, to blaze us a trail of blood.’ The transcript of the conversation was seen by The Wall Street Journal.

In February, he also told staff at a Huawei campus in Wuhan, where the first cases of coronavirus were found, that ‘the company has entered a state of war’. 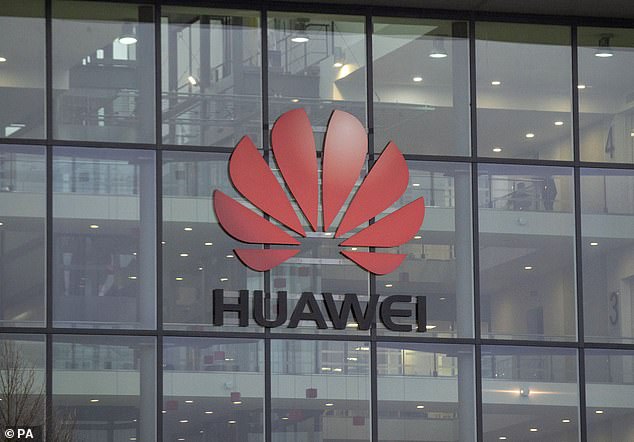 Shortly after Mr Johnson gave the green-light for Huawei, Catherine Chen, Huawei’s head of public affairs, compared winning the deal to one of the bloodiest battles in history.

5G is the next generation of mobile broadband that will replace 4G.

Download speeds will be 10 times faster than today, and will change how we work and communicate.

Self-driving cars, fire alarms and even fridges will be connected to 5G.

5G networks began rolling out in the US and around the world in 2018.

Companies are racing to have the fastest or biggest 5G networks, and countries are competing to be the first to implement 5G nation-wide, because the benefits of the new technology are expected to transform society.

According to The Sunday Times, she wrote in a memo that the decision was ‘just like the success of the Battle of Stalingrad, which was a turning point that reshaped the global landscape’.

The Prime Minister held a meeting of his National Security Council last week where China was the main topic of discussion.

He wants the UK to form a deeper relationship with its ‘Five-Eyes’ intelligence partners, comprising Australia, Canada, New Zealand and the US in areas which China currently dominates in.

This includes more investment in technology and research so the UK is not as reliant on Chinese products going forward.

The Cabinet is divided on how to approach the issue of China, which has been accused of covering up the spread of coronavirus earlier in the year.

Rishi Sunak, the Chancellor, has warned against putting up ‘an economic wall’ with the world’s largest economy. 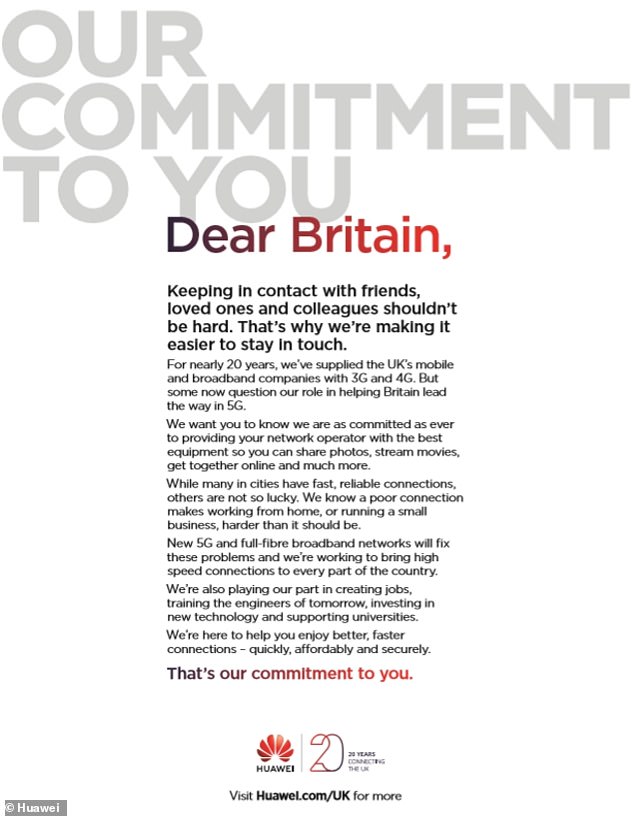 Huawei released a statement this month published in The Daily Mail, The Daily Telegraph and The Times promising they will help ‘lead the way on 5G in Britain’

Foreign Office sources told the Daily Mail that there are fears that taking too strong a line with China could impact on Britain’s ability to deal with the pandemic as it relies on the country for vital PPE for frontline workers.

Government figures revealed that during a 13-day period in April, the UK imported over 12 million pieces of PPE in the UK from China alone.

The PM however is determined to ‘reset and reform’ relations, according to the Mail on Sunday.

Business leaders have also been warned by China’s ambassador to the UK, Liu Xiaoming, that abandoning Huawei could undermine plans for Chinese companies to build nuclear power plants and the HS2 high-speed rail network.

Liu signalled that the decision over Huawei was being seen in Beijing as ‘a litmus test of whether Britain is a true and faithful partner of China’.

Those listening interpreted those words as a threat. According to the Sunday Times, government officials dismissed the comments as ‘sabre-rattling’.