Republicans running for Congress later this year are deciding on their appropriate level of panic in the aftermath of Democrat Conor Lamb likely winning a long-held GOP seat in a district President Trump won by 20 points.

In a tweet, former GOP Rep. David Jolly suggested to his Republican peers that they be prepared for the Democrats to take over the House of Representatives.

‘Probably the primary takeaway tonight from PA-18 is: Madam Speaker,’ Jolly said, suggesting that if Democrats take back the House they’d select their current leader, Nancy Pelosi, to be speaker once more. 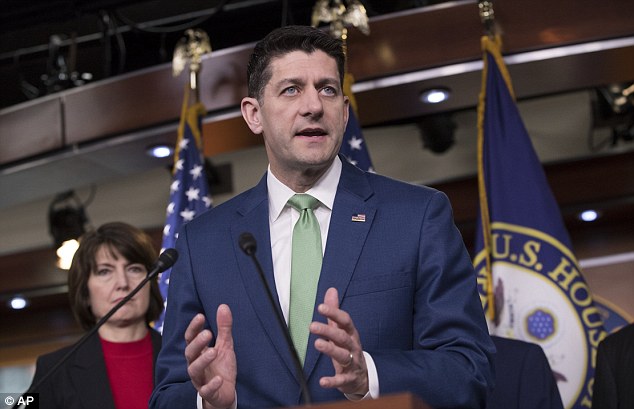 House Speaker Paul Ryan tried to calm jitters Wednesday suggesting that Conor Lamb ran as a ‘conservative,’ and that in a normal cycle, Democrats would select a liberal loser in redder districts 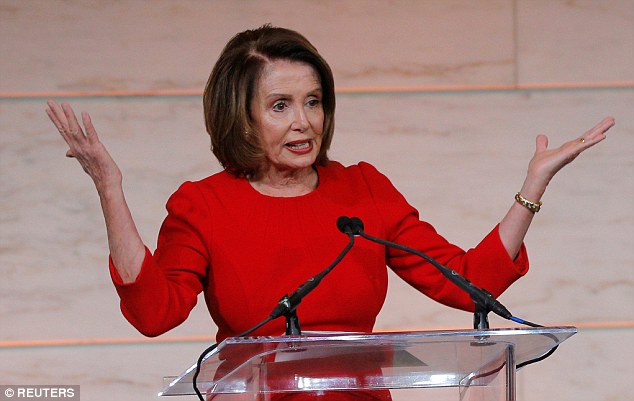 Former Rep. David Jolly suggested that the biggest takeaway from the Pennsylvania race was ‘Madam Speaker,’ meaning he expected House Democratic Leader Nancy Pelosi (pictured) to once again take back the speaker’s gavel

Lamb, for his part, did run away from Pelosi, telling voters in his Western Pennsylvania district that he would not support her in a leadership vote.

Though he also championed traditional Democratic values, including LGBT rights and is politically pro-choice, though doesn’t personally support abortion.

During his victory speech – in the early a.m. hours of Wednesday, when he was only several hundred votes ahead, with more absentee votes to be counted – Lamb spoke of being part of his grandfather’s Democratic Party, that of FDR.

He spoke of his support for Democratic-backed programs like Medicare and Social Security, calling them ‘America’s way of saying we are all in this together.’

Ryan suggested a candidate like Lamb would be toast in a normal Democratic primary.

‘Primaries bring them to the left,’ the House Speaker argued to reporters. ‘So this is something that you’re not going to see repeated because they didn’t have a primary.’

According to an account from Politico, the National Republican Congressional Committee’s chairman, Rep. Steve Stivers, called the race a ‘wake-up call.’ 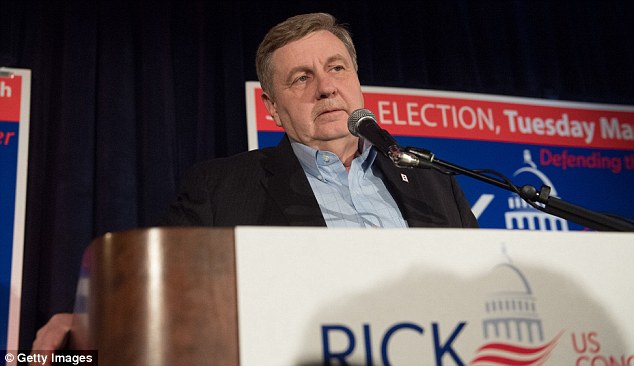 Some Republicans are interpreting Rick Saccone’s (pictured) likely miss in a district he should have easily won as simply the testament of a weak candidate, while others caution that a ‘hurricane force wind’ is coming and could put Democrats back in power on Capitol Hill

‘Prepare to bear down,’ he told his fellow House members, who are all up for re-election come November.

But a number of GOP lawmakers downplayed the Pennsylvania race, suggesting that Republican Rick Saccone, a member of the state House, was merely a weak candidate, and 33-year-old Lamb, a former federal prosecutor and Marine veteran, was a ‘unicorn,’ Politico said.

Doug Heye, who was the Republican National Committee’s communications director during the 2010 cycle, the year the GOP regained the House, two years into President Obama’s tenure, told DailyMail.com that he thought the results of the Pennsylvania race ‘should be extremely troubling to the GOP.’

He said he believed President Trump’s approval rating was acting like an ‘albatross’ on other Republicans’ prospects for re-election and that the bevy of GOP lawmakers retiring was like ‘the animals scurrying before the earthquake they see hitting their district.’

‘By way of comparison, at the RNC in 2010, our magic number for Obama was 46 per cent,’ Heye explained. ‘If he was below that, we felt we would win the House.’

A Gallup poll from October 2010 had Obama’s approval rating at 44.7 per cent.

The Republicans picked up 63 seats the next month, taking the majority from the Pelosi-led Democrats.

‘Obviously President Trump’s numbers are well below that,’ Heye noted.

In a tweet, the Cook Political Report’s Amy Walter suggested there was a correlation between Trump’s popularity and the results of recent special elections.

Trump had a 50 per cent approval rating in Georgia’s 8th Congressional District when Republican Karen Handel won a special election last year, taking 52 per cent of the vote.

The president also had an approval rating of 50 per cent in the Montana district that elected Republican Rep. Greg Gianforte, as he earned 50 per cent of the vote last spring.

‘Anyone see a pattern here?’ she mused.

Going forward, Rep. Charlie Dent, a Pennsylvania Republican who is among those retiring, suggested Republicans, even those in safer districts, get ready.

He pointed out that in the Lamb-Saccone race, while the district may have voted 20 points up for President Trump, ‘you can also call it a minus-20 Hillary district.’

Anti-Clinton sentiment may have powered a large Trump vote, just as an anti-Trump vote may help Congressional Democrats pick up seats in the fall.

‘I think most Republicans realize we’re running into a very serious headwind – a hurricane force wind. It’s coming and we have to be ready for it,’ Dent said.