Furious former Labour MPs have lashed out at Jeremy Corbyn after he signalled he would be willing to scrap the UK’s Trident nuclear deterrent if he becomes prime minister.

Mr Corbyn is a vocal and long-time opponent of nuclear weapons and yesterday he said the UK’s missiles ‘would be part’ of any future ‘nonproliferation treaty discussions’.

Mr Corbyn’s comments were pounced on by his critics as they suggested they showed the Labour leader could not be trusted with maintaining the UK’s national security.

They said getting rid of the missiles would ‘leave the UK and its Nato allies at the mercy of nuclear blackmail’ from Russian president Vladimir Putin.

Jeremy Corbyn, pictured on The Andrew Marr Show yesterday, suggested he would be willing to give up the UK’s Trident nuclear deterrent if he becomes PM 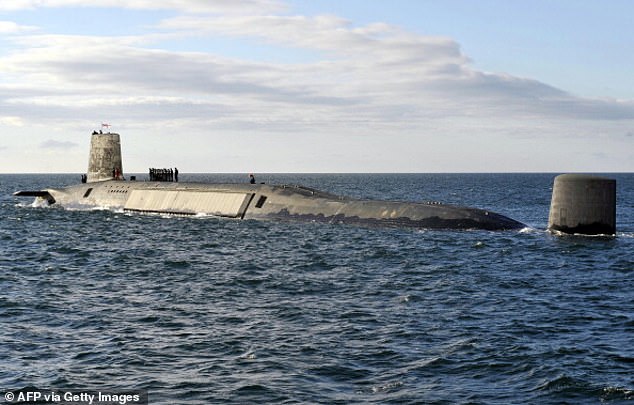 MPs voted to renew Trident in July 2016. Pictured in HMS Victorious off the west coast of Scotland in 2013. It is one of four UK submarines tasked with carrying Britain’s nuclear missiles

MPs voted in July 2016 to renew Trident as they gave the green light to building four new replacement submarines to carry the UK’s nuclear missiles.

Labour MPs were given a free vote on the issue and the majority backed renewal but Mr Corbyn voted against maintaining Britain’s continuous at-sea nuclear deterrent.

Yesterday he was grilled about what his approach would be to the UK’s nuclear weapons amid an ongoing row over whether he would ever agree to authorise a missile strike against an enemy nation.

He told the Andrew Marr Show on BBC One: ‘My view is that we have nuclear weapons, that there is a Nuclear Non-Proliferation Treaty.

‘There have been many expressions about the world with the aspiration of a nuclear free world by President Obama, by former President Gorbachev and by many others.

‘But also I think we have to look at what are the real threats to security around the world, and what are they? Terrorism, cyber security, climate change, environmental disaster and massive imbalances which are important.’

The SNP has hinted that scrapping Trident could be a red line during any post-election talks with Labour about the prospect of propping up an administration led by Mr Corbyn.

Asked if the UK’s Trident-carrying nuclear submarines would stay under his watch, Mr Corbyn said: ‘Well, they would be part, obviously if you went into nonproliferation treaty discussions, then clearly every country’s nuclear weapons go into that equation.

‘And I do think we have to recognise that, as I said, the real problems in the world are not what was happening during the Cold War, but actually the levels of insecurity brought about by climate disaster and many other things.’

John Woodcock, a former Labour MP who is standing down at the general election, told The Sun that Mr Corbyn represented a ‘danger to Britain’.

He said: ‘Labour’s lifelong CND-supporting leader gives the game away on Trident every time he opens his mouth.

‘It is absurd to suggest that a Jeremy Corbyn-led government would continue investing in the nuclear deterrent.’

He added: ‘He would leave the UK and its Nato allies at the mercy of nuclear blackmail from Putin.’

Mr Corbyn also yesterday failed to give his full backing to Nato, prompting former Labour MP Mike Gapes to tweet: ‘Once again Corbyn fails to support Nato. He is not fit to be Prime Minister.’