‘All I want to do is come home to Britain’: Ex-London schoolgirl, 19, who ran away to join ISIS with two friends flees while ‘nine months pregnant’ after losing two children in the warzone

Shamima Begum is now 19 and is alive in Syria

One of three schoolgirls who fled England to join the ranks of Islamic State in Syria has pleaded with authorities to let her come home.

Shamima Begum, 19, has been found in a refugee camp in Northern Syria four years after she ran away from home in Bethnal Green in London in February 2015.

Begum who left London with classmates Kadiza Sultana and Amira Abase says she ‘will do anything’ to come home and live a normal life.

From Bethnal Green Academy is and close to giving birth, according to The Times’ Anthony Loyd who met her in Syria.

The former London schoolgirl watched as her two elder children died from malnutrition before she decided to escape the last ISIS stronghold in eastern Syria to save the life of her unborn child.

‘I could not endure the suffering and hardship that staying on the battlefield involved,’ she told The Times.

‘But I was also frightened that the child I am about to give birth to would die like my other children if I stayed on. So I fled the caliphate. Now all I want to do is come home to Britain.’

Despite begging to return Miss Begum said she has ‘no regrets’ about leaving the UK.

Islamic State fighters have been surrendering, along with their wives and children, as they flee Baghuz. 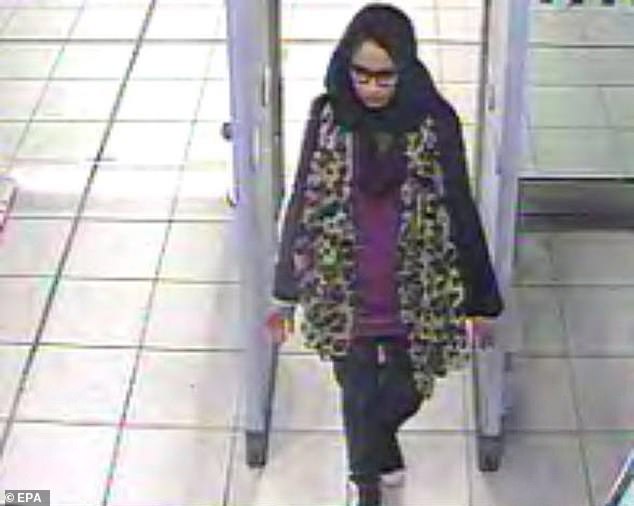 Timeline of the London girls’ journey into the heart of terror

The three girls leave the UK for Syria when they should have been at school.

The trio flew from Gatwick Airport to Istanbul, Turkey before carrying on to Syria via land.

A month later the girls attempt to show they are living an ordinary life. Amira posts a social media picture of food on a table – calling it an ISIS (dawla) takeaway

The Syrian Democratic Forces (SDF) had circled the area and with the help of US airstrikes – left ISIS with nowhere to run.

Begum said she had heard two of her friends are still alive.

Earlier reports said Kadiza Sultana was killed by an airstrike on Raqqa, in 2016.

Abase, who also flew from Gatwick to Istanbul and fled over the border to Syria, was in Baghuz with Begum.

The three girls were flying out to meet Sharmeema Begum who was already in Syria after fleeing Bethnal Green Academy in 2014. She too is known to have been in the last ISIS village.

‘I heard from other women only two weeks ago that the two were still alive in Baghuz,’ Begum said.

‘But with all the bombing, I am not sure whether they have survived.’

Begum said she is aware she is not going to be welcomed with open arms.

She said: ‘I know what everyone at home thinks of me as I have read all that was written about me online.

‘But I just want to come home to have my child. I’ll do anything required just to be able to come home and live quietly with my child.’

Security minister Ben Wallace said any jihadis and their spouses can expect to be quizzed and face jail time.

He said: ‘They are battle-hardened . . . and some are coming back to further and continue their attacks on our way of life and our values.’ 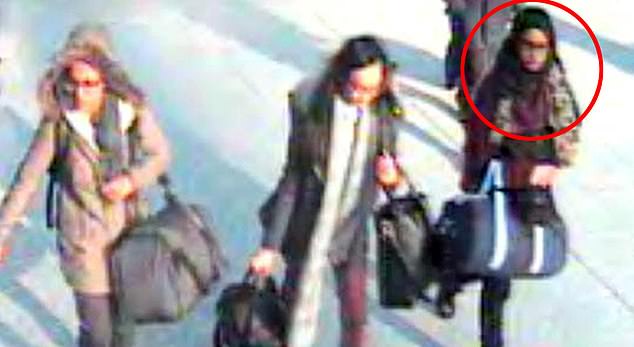 The latest figures suggest 145 women and 50 minors were among the estimated 850 people who travelled from the UK to support IS in Iraq and Syria.

Of the 425 returnees recorded, only two women and four minors were listed.

A report, From Daesh to Diaspora, found 13% of the 41,490 foreign citizens who became affiliated with the terror group in Iraq and Syria between 2013 and 2018 were women – and another 12% were minors.

A lawyer representing the girls’ families said she was pleased Shamima is not dead.

Tasnime Akunjee said authorities must treat the girls as victims, adding that there is no evidence they broke any laws during their time abroad.

He told The Times: ‘I had feared the worst. I’m just really thankful she’s alive,’ he said. ‘Of course there will be some complications now but I am very grateful.

‘I think for those three girls, or two girls now, there was an understanding that as long as they had committed no further offence they will not be prosecuted and can come and be seen as victims. That was our position and that was also the position of the police. Bernard Hogan-Howe [who was head of Scotland Yard] told MPs that.’