Lesley Cooper, who is at war with a father-of-six over her Mosquito anti-child device, has said his children are violating her property

An ex-magistrate who is at war with a father-of-six over her Mosquito anti-child device has defended using the device, saying ‘everyone is entitled to peace and quiet.’

Lesley Cooper installed the high-pitched alarm at her home in the seaside town of Babbacombe, Devon, because Thomas Weldon’s children were causing a ‘nuisance’ to her and her property.

Ms Cooper appeared on This Morning on Monday in attempt to smooth things over with Mr Weldon, who is father to six children, aged five to 15.

However, the feuding pair came no closer to a resolution with Ms Cooper insisting the children are violating her property and she is entitled to ‘peace and quiet’.

Ms Cooper said: ‘It is an extreme measure that I gave a great amount of thought to for several years. It’s only been up for two years and it’s only been used six times, each time less than five minutes.

‘It’s been used because of the children who are my neighbours at the back… who have been violating my property and living.

‘They kick footballs at the property, the garage doors are on runners so when a ball or any other object, which have included scooters and BMX bikes which they turn on my little four-court, smash against the doors.

‘Every person is entitled to peace and quiet in their own home. And I haven’t been given that entitlement by this behaviour. And secondly they are entitled to have their property safe.’ 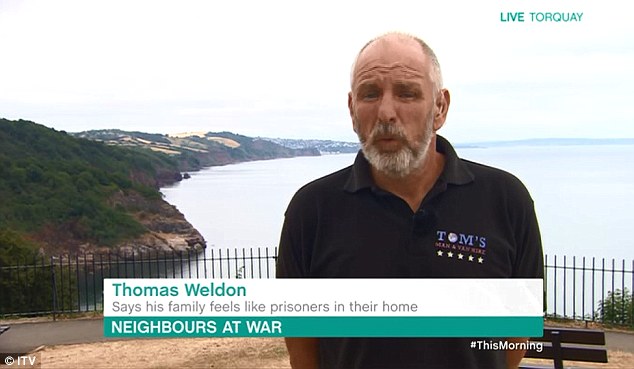 Ms Cooper appeared on This Morning o n Monday in attempt to smooth things over with Mr Weldon (pictured), who is father to six children, aged five to 15 She continued: ‘I have had a wall partly brought down, marks on my doors and in the last few weeks, paint thrown.’

Ms Cooper added: ‘I’m happy to have talks take place… [but] conversation of a reasonable sort has been impossible.

‘The children have come out to support Mr Weldon, screaming, dancing and shouting at me as well. I have had such sexist and ageist remarks from Mr Weldon that I found it impossible to have a conversation.’

Ms Cooper defended using the alarm, saying ‘the alarm is never on unless the moment my property is being assaulted.’

However, Mr Weldon disagreed and accused the retired magistrate of assaulting his children.

‘Every time [the alarm] is switched on, I feel my children are being assaulted. It makes them cry in pain.’ 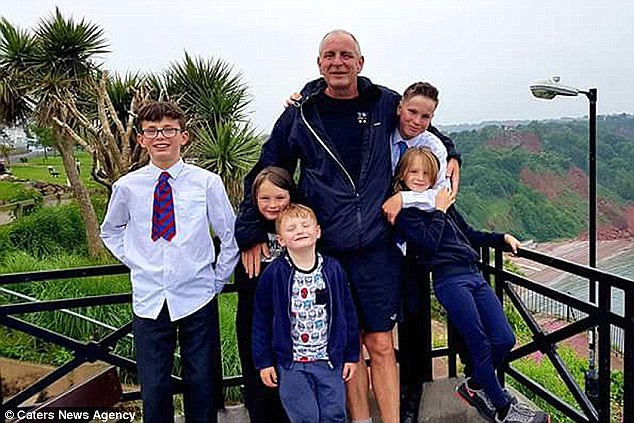 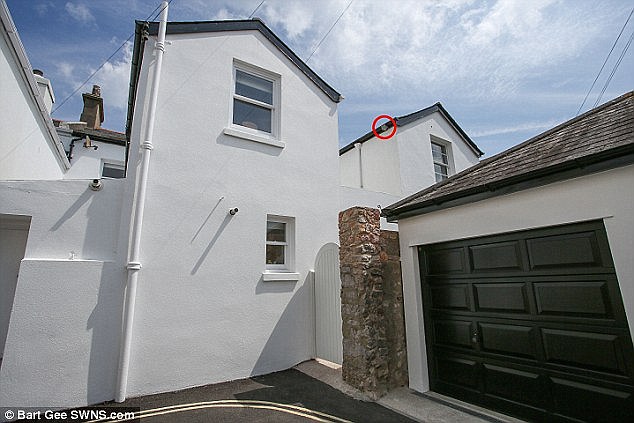 Thomas Weldon’s property (on the left) and Lesley Cooper’s (on the right). The mosquito alarm that is fitted to Ms Cooper’s property can been seen in the red circle

What is the mosquito alarm?’ 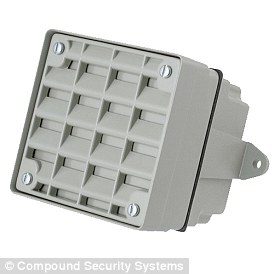 The mosquito alarm is designed to deter young people from a specific area.

The alarm itself is said to not be painful but very irritating for youngsters- who will move away from an area to get away from the sound.

It was invented by Howard Stapleton in 2005- with the idea coming to him after being irritated by a factory noise.

The device is legal and does not require any planning permission. It is simply attached to the outside of your home or a post.

The device has attracted a lot of controversy.

In February 2008 a campaign call ‘Buzz Off’ was launched to get the device banned.

The campaign claimed they were aggressive and created no-go areas for children and young adults who weren’t guilty of anything.

But the government said they have no plans to ban them.

In the same year the National Autistic Society said they ‘extremely concerned’ about the effects of the device on people with autism.

In 2010, an investigation by the Council of Europe found that the device was ‘ degrading and discriminatory’ to youngsters and should be banned because it ‘violates legislation prohibiting torture’.

A device installed at a Spar shop in Caerleon Road in Newport, South Wales, was banned for three months by a community safety partnership.

Despite the controversy it does have some supporters.

It has previously been backed by the British Retail Consortium and the Association of Convenience Stores.

He added: ‘She gives a dirty look… she isn’t just assaulting my children, she’s assaulting other children in the area.

‘She doesn’t listen to reason. More or less she complains about everyone.’

Mr Weldon has launched a petition, which he says has more than 90 signatures.

Mr Weldon, who is father to Mitchell, five, Lilly, eight, Lola, nine, Anthony, 11, Thomas, 13 and Shannon, 15, previously said: ‘This alarm has affected the kids really badly – they’re scared to go outside at all.

‘The alarm makes them scream in pain, I even had to take my daughter to hospital because her ears didn’t stop ringing.

‘I absolutely love where I live but I just can’t stand the terror she’s causing.

‘We love our area and we live in a beautiful place but my kids are like prisoners. I don’t want to move out because I love where I live.

‘It’s not just me she’s terrible to, it’s the whole area – she really is Britain’s worst neighbour.

‘I’ve got six children and she’s been vile to all of them. I just want a peaceful and nice life without that alarm pointing at me.’

Mr Weldon no longer lives with the mother of his children after an amicable split. She now lives in Torquay.

The family have lived in the quaint village for most of the last 18 years- having briefly moved out of the area in 2011.

Ms Cooper, who spent many years serving as a magistrate, confirmed she has had the alarm there for two years.

But she says she has only turned it on when children have been hurling objects at her property.

The alarms, which cost £600, are said to infringe human rights under noise-nuisance laws.

When the Mosquito MK4 alarm and motion sensor was launched in 2008, a campaign called ‘Buzz Off’ led by the Children’s Commissioner for England called for it to be banned, claiming the device was unnecessarily aggressive and created no-go areas for children and young adults who may have done nothing wrong.

In 2010, an investigation by the Council of Europe found that the device was ‘ degrading and discriminatory’ to youngsters and should be banned because it ‘violates legislation prohibiting torture’.

Since it went on the market, thousands have been sold in the UK, mainly to small-shop owners, but it is understood sales of the device to families and home owners are soaring.

It works by emitting an alternating high-frequency tone four times a second which isn’t audible to people over about 25 years of age, but is intensely irritating to people under that age. 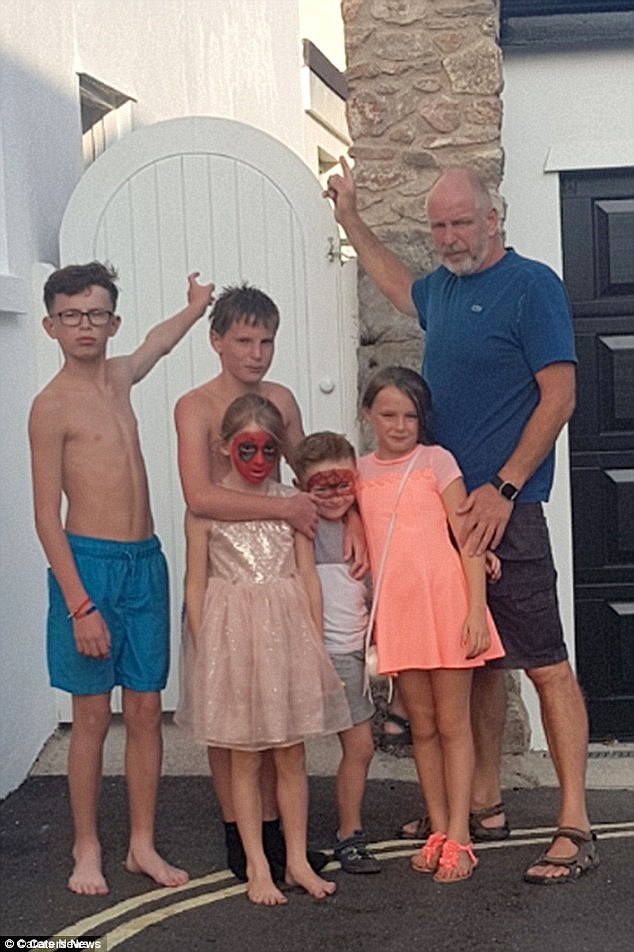 The feuding pair came no closer to a resolution with Ms Cooper insisting the children are violating her property when they play and Mr Weldon claiming she is ‘assaulting’ his children, who are left ‘crying in pain’ by the alarms Ms Cooper defended using the alarm, saying ‘the alarm is never on unless the moment my property is being assaulted’

A number of factors can contribute to it such as long term exposure to loud noises, conditions more common to elderly people such as diabetes or high blood pressure and issues with the the outer and inner ear.

It has been claimed that two previous tenants at Mr Weldon’s property have left because of the dispute.

The owner of Mr Weldon’s rented house says other tenants have left.

Mrs Ridgewell, who bought the house 14 years ago, said: ‘Before Thomas lived there I had two other tenants leave.

‘My daughter rented the house for a while and lived there with my grandchild and her husband. She drove them insane to the point where they had to move back in with me.

‘She just doesn’t stop complaining and writes to me moaning about the tenants. In the beginning I thought they must have done something until my own daughter lived there for about 18 months around five years ago.

‘It’s a beautiful home in a lovely location and it’s meant to be a family home.

‘It’s so sad really as I can’t imagine wanting to live in total conflict all of the time. It’s much nicer to just say, ‘good morning’. 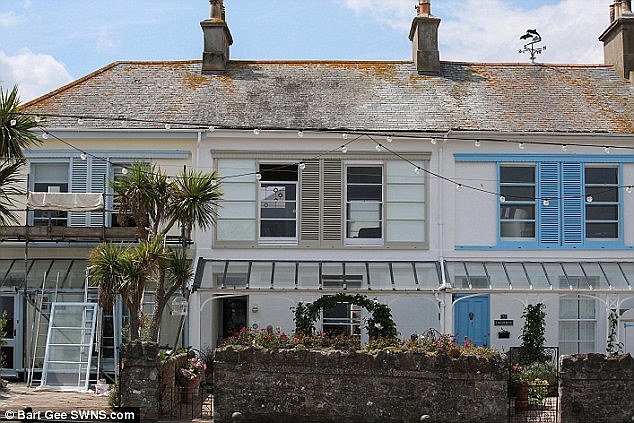 The front of Ms Cooper’s property. The retired teacher said she has only ever used the alarm ‘four times’ for a period of ‘just a few minutes’

Ms Cooper confirmed that she has an alarm on her house but said she had only used it four times in three years, for five minutes each time, when children had been throwing objects at her house.

She said: ‘The alarm has been passed by Torbay Council and the police.

‘It has been authorised because of the persistent nuisance which disturbs my residence by the family at the rear of my property in Princes Street.

‘They have continually vandalised, harassed and made a complete nuisance of themselves. The authorities are still dealing with it.

‘The alarm has been passed by the European Court of Justice and by the British Parliament.

‘I am an awarded teacher of 15 years. The alarm has been on four times in three years because objects were being hurled at my property for a maximum of five minutes at a time. My two garages are at the back in Princes Street.

‘I think I am a very good resident. I am an honest-living, concerned neighbour at all times and I wish others to behave likewise.’ 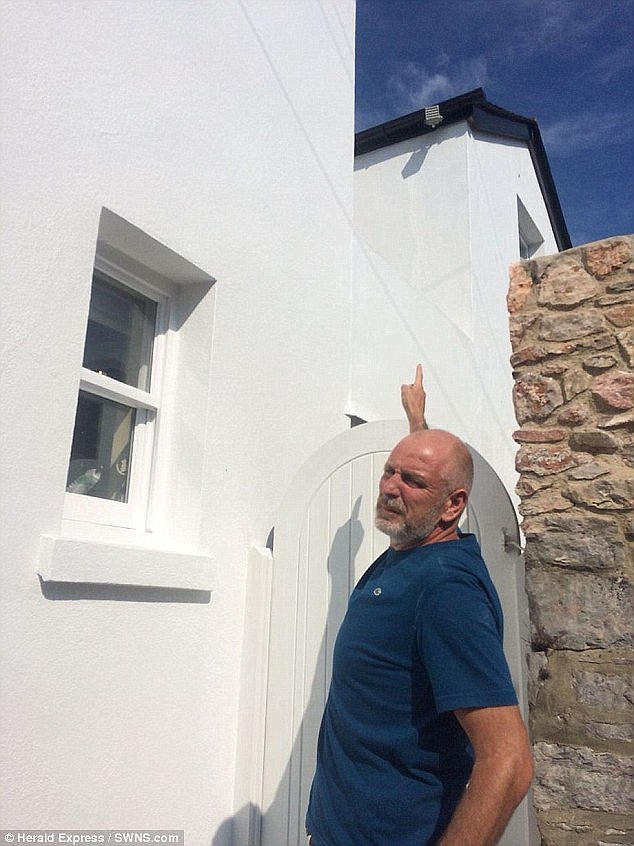 Torbay Council said: ‘We currently have no open case regarding this issue. We would ask that the complainant come forward so that we can conduct any necessary investigation.’

Ms Cooper said her mother, Joan Cooper had been a well-known and well-respected Torbay councillor for many years.

The landlady at The Buccaneer pub on Babbacombe Downs, Marion Ricketts, said she and other neighbours supported Mr Weldon in his fight to have the alarm removed.

Mrs Ricketts said: ‘We have had problems with her banging on our doors for seven years every time a delivery lorry stops in the lane.

‘I can handle her but it’s what she’s doing to the kids that all of the neighbours are unhappy about. I’m an adult. I can stand up for myself. But it’s not right to have that alarm hurting kids.

‘The alarms should be banned everywhere.

‘Thomas has got a lot of children but they are so well-behaved. They are doing what kids should do – going outdoors, not sitting inside playing on an XBox.’