A former mayor is being investigated over claims he called a headmistress who banned the hijab an ‘evil racist’.

Salim Mulla is accused of being part of a hate campaign that targeted primary school headmistress Neena Lall.

As part of attempts to help children integrate into British society, she banned the Islamic headscarf and fasting for pupils under eight at St Stephen’s Primary in Newham, East London.

But the school is said to have been bullied into reversing the move after it received ‘ridiculous oppression and intimidation’ in emails and online comments from around the country.

Mr Mulla, a serving Labour councillor in Blackburn – some 240 miles away – is accused of being part of a campaign that led to Miss Lall caving in and her chairman of governors resigning.

In one Facebook post, he wrote: ‘Work needs to be done to get this evil woman out of school. She must go. She is racist bigot.’ Blackburn council’s leader Mohammed Khan said Mr Mulla’s behaviour was ‘not acceptable’ and the authority would ‘deal with him’. He confirmed the former mayor – whose Facebook profile picture shows him in civic regalia shaking hands with the Queen – would not run in this year’s local election.

Mr Mulla, who was mayor four years ago, was suspended by the Labour Party in 2016 over alleged anti-Semitic posts online. He was reinstated last year after being cleared by an investigation.

It follows revelations that Labour councillors who campaigned against the school ban have ties to the hardline Islamic group Muslim Engagement and Development (MEND), which claimed credit for the U-turn. MEND says its aim is to encourage Muslims to become more active in public life, but has been linked with speakers who have promoted jihad and homophobia.

Mr Mulla yesterday stood by his comments about Miss Lall, who is a Sikh. He said: ‘I think she was racist; she doesn’t understand the religion because she is not part of that religion. I spoke as an individual, I did not make the comment as a councillor or former mayor.’ 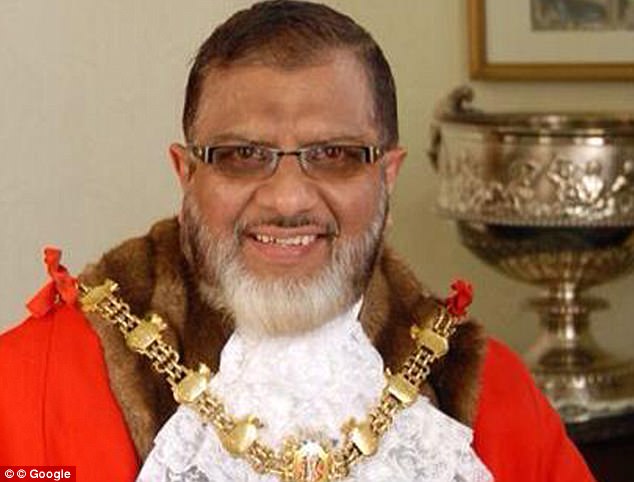 Mr Mulla, a serving Labour councillor in Blackburn – some 240 miles away – is accused of being part of a campaign that led to Miss Lall caving in

He added: ‘I stand by the comment about the racist element, but I probably would retract that [calling Miss Lall evil].’ More than 20,000 people had signed an online petition against the move.

St Stephen’s, which is rated outstanding by Ofsted, reversed the ban last week. Miss Lall, 50, apologised to parents on Tuesday and chairman of governors Arif Qawi resigned. He has now accused the Government of leaving staff exposed to bullying from ‘extremists’ over the hijab ban.

Mr Qawi, 54, wrote to Education Secretary Damian Hinds: ‘I am flabbergasted why you and the Department for Education have stayed silent on this subject, rather than firmly enforcing the head’s decision. This lack of support, and weak attitude, will be very detrimental to the nation’s children.’

He added that staff felt ‘badly let down’ and agreed to resign ‘against every fibre in my body… if that would lay the matter to rest’.

A school insider said the ban was brought in because the hijab was ‘alienating’ young girls. But one mother said parents were angry because only one faith was targeted. The Labour Party refused to comment. The DfE said it had contacted the school over staff intimidation.