Ex-NHS nurse, 55, died falling down the stairs after sharing four bottles of wine

Ex-NHS nurse, 55, died falling down the stairs after sharing four bottles of wine, Prosecco, beer and port with her husband during night in, inquest hears

A former NHS nurse died falling down the stairs after sharing four bottles of wine, Prosecco, beer and port with her husband during a night in, an inquest heard.

Paula Jefferies, 55, is thought to have lost her footing and hit her head as she was on her way to bed on May 13 last year.

Her husband Robert found her at the bottom of the stairs at their home in Newall Green, Manchester when he woke up the following morning. 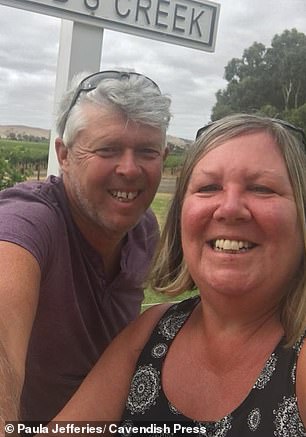 Paula Jefferies, 55, (left, and right, with her husband Robert) is thought to have lost her footing and hit her head as she was on her way to bed on May 13 last year.

Emergency services were called to the scene but were unable to save Mrs Jefferies who suffered a fatal head injury.

An inquest heard the mother of two had herself consumed two bottles of white wine, half a bottle of Prosecco and two glasses of port with her dinner in the hours before the tragedy.

Tests showed she would have been more than twice the alcohol limit for driving and a coroner said it was usually a ‘luck of the draw’ for people to fall down the stairs and then pick themselves up.

Government health officials recommend men and women who drink regularly should consume no more than six pints of beer or seven glasses of wine in a week.

The accident occurred just weeks after Mrs Jefferies described as a ‘lovely lady who always had a smile’ had only just retired from her job as a lead nurse in Bolton after 37 years working in healthcare.

Mr Jefferies a gardener told the Manchester hearing: ‘We were at home and had a home cooked meal. 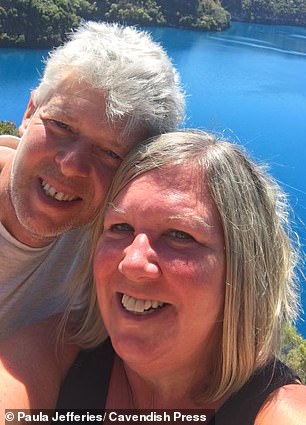 Paula and Robert Jefferies in an undated holiday photo

‘I would say we were both drunk – it was regular for a weekend. It was about half past twelve she was in the kitchen texting, she said to me she would be up shortly so I left her to it but she never came upstairs.’

Mr Jefferies woke up at 6.40am and found his wife at the bottom of the stairs.

‘I phoned the emergency services straight away; the response came first then the ambulance service came.

A post-mortem revealed Mrs Jefferies had suffered a significant head injury. She had 190 milligrams of alcohol per 100 millilitres of blood. The alcohol limit for driving is 80mg.

Recording a conclusion of accidental death, Coroner Nigel Meadows said there were no traces of drugs or medicine in Mrs Jefferies’ blood.

‘The position of the blood on either side of the stairs seems consistent with her having a fall down for some distance,’ he said.

‘People have falls in their home all the time, trip over their feet and slip, she could have lost her footing and because of the amount of alcohol in her system had some difficulties. 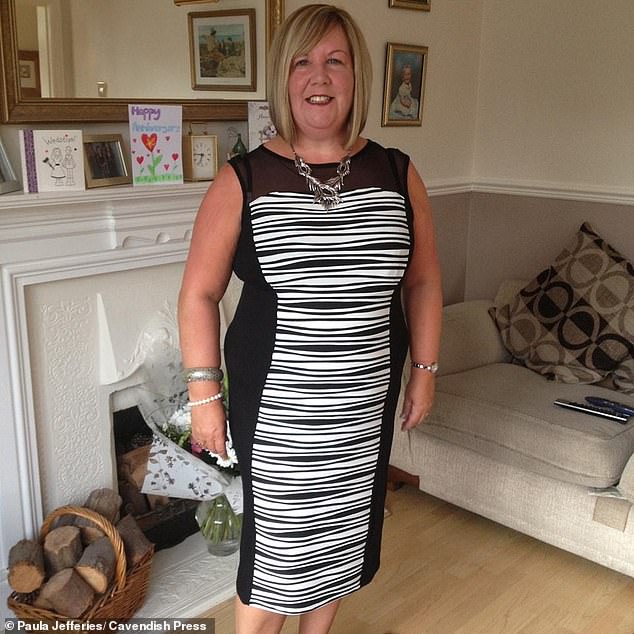 In 2009 Mrs Jefferies successfully sued an Indian restaurant after she stumbled in her high heels and broke her ankle as she lost her footing on a concrete ramp following her meal to celebrate her daughter’s 12th birthday.

She went on to develop a potentially life-threatening blood clot on her lung as a result of being left immobile.

She was subsequently awarded compensation running into tens of thousands of pounds after she blamed her fall on the concrete ramp at the restaurant’s entrance, saying it was dangerous because of its steeply sloping sides.

A judge ruled the slope was a ‘trap for the unwary’ because it failed to extend across the full width of the door and because its sides were ‘too steep’. 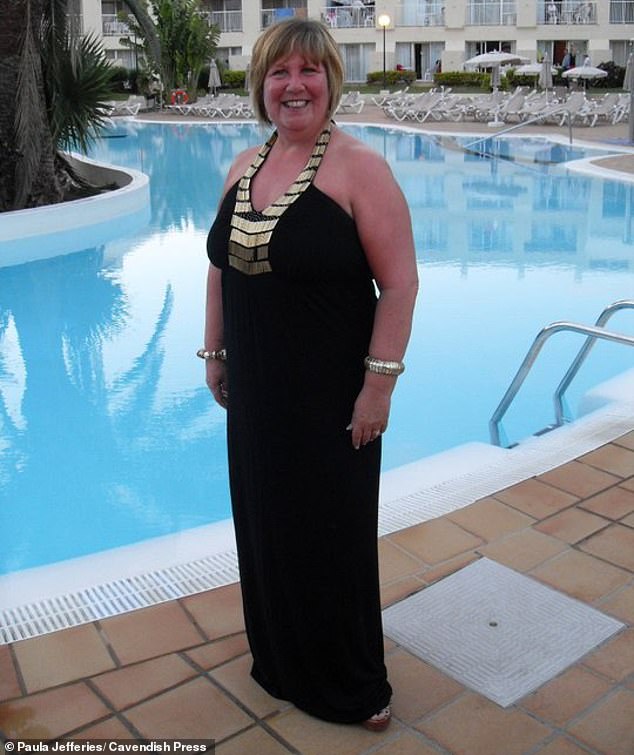