School’s IN for the summer? Ex-Ofsted boss says end-of-term holiday should be scrapped to help pupils catch up and prevent a ‘lost generation’

The former boss of Ofsted says that end-of-term holiday should be scrapped to help pupils catch up and prevent a ‘lost generation’.

Michael Wilshaw says that children being taken out of schools amid the coronavirus pandemic has been a great tragedy.

He believes that the priority for educators as the lockdown eases across Britain should be helping pupils to catch up.

And that could even mean getting rid of the end of term holidays that have become a mainstay in the school calendar.

Yesterday he was asked by Sophy Ridge on Sky News whether the country will have to contend with a ‘lost generation’ if lockdown continues much longer.

He said: ‘Yes, a lost generation of youngsters and it is a great tragedy because our education system has made huge progress over the last few years and the results published last year show that.

‘It is a great shame that this could unravel that progress. I’m sure it won’t because head teachers, when schools do go back, are absolutely committed to recovering lost ground and that means convincing teachers to work extra hours to really intensify the work that they do with youngsters, particularly in examination cohorts.’

Sir Michael added that when England’s schools are back up and running, headteacher should hold extra lessons at the weekends and in the holidays.

He called for schools should reopen as planned on June 1, despite trade unionists being concerned about safety. 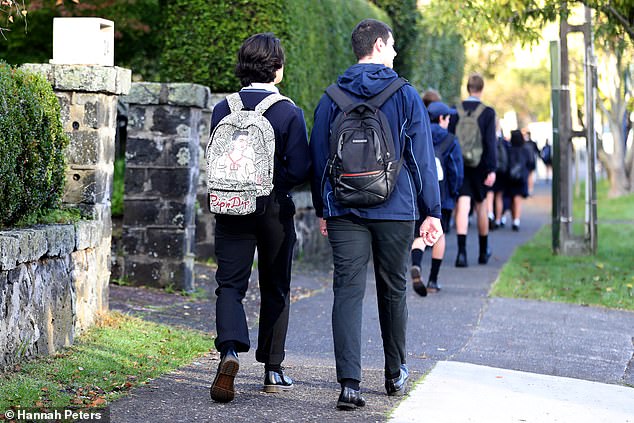 Students walk to Mount Albert Grammar School on May 18, 2020 in Auckland, New Zealand

‘They should [reopen] and other countries have opened up their schools in Europe and beyond and so should we.

‘The critical thing is until parents and families feel confident to send their children to school safely, that’s the big issue.

‘It’s all right opening up schools but if parents lack that confidence then they are not going to send them in… the government should have had two or three months to really prepare parents for the opening on the 1st June.’

Meanwhile a new poll released yesterday suggested teachers would be prepared to sacrifice some of their summer break to provide extra class time.

Six in 10 polled for the Sun on Sunday said they would be willing to work extra shifts to help struggling pupils.