A former OpenTable employee has been charged with one count of wire fraud after making hundreds of bogus reservations at Chicago restaurants.

According to the Chicago Sun-Times, Steven Addison, 30, made more than 300 reservations at at least 45 Chicago restaurants using rival booking service Reserve.

Prosecutors said in court records that Addison allegedly booked around 1,200 seats in all – often during peak hours, making the no-shows especially costly – in an attempt to hurt Reserve’s reputation.

Addison, of Chicago, allegedly made the reservations between November 2017 and February 2018.

Former OpenTable employee Steven Addison, 30, has been charged with one count of wire fraud after making hundreds of bogus reservations at Chicago restaurants

Court records state that Addison ‘intended to demonstrate to Chicago restaurants that Reserve had a purportedly inferior reservation system’ and ‘committed these acts on his own accord and did not personally profit from the scheme’.

Eater Chicago referred to Addison as a former OpenTable employee despite the company only being described a ‘Company A’ in documents.

However, the description of ‘an online restaurant reservation service with headquarters in San Francisco, California’ fits that of OpenTable.

The court records allege that Addison discovered that reservations could be made on Reserve using fake names, emails and telephone numbers.

He then made more than 300 reservations with more than 1,200 seats under names including ‘Hans Gruber’, ‘Richard Ashcroft’ and ‘Jimmy Smits’.

He would also make several reservations at different restaurants in Chicago under the same name and at the same date and time.

In one instance, on November 25, 2017, Addison booked a table for four people at six different restaurants for 6pm.

Court documents also state that he made ‘multiple fake reservations on potentially busy days when he knew restaurants would suffer more losses’.

OpenTable states that it didn’t know about the fake bookings and that Addison, whom they referred to as a ‘rogue employee’, was identified and fired back in March.

‘On behalf of OpenTable, I extend our sincerest apologies to the restaurant community in Chicago and to Reserve for this disgraceful, unsanctioned behavior,’ OpenTable CEO Christa Quarles wrote in a public apology.

A press release from the district attorney’s office didn’t reveal the name of Addison’s attorney, but he is expected to be arraigned on Tuesday morning. 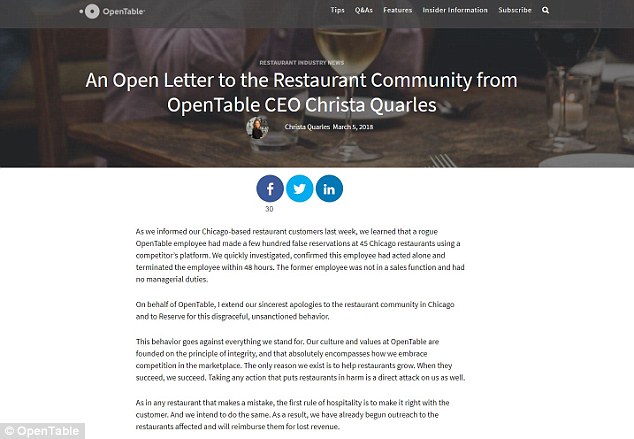 A statement from Reserve CEO Greg Hong read: ‘When the FBI requested data that’s in our possession, we provided it.

‘Otherwise, Reserve moved on from the matter many months ago so that we could focus on what’s most important to us: serving our restaurant partners the best we can.’

Peter de Castro, co-owner of the restaurant Tavern at the Park, told the Chicago Sun-Times that his restaurant was down five percent in December and two percent in February due to the no-show reservations.

He told the newspaper he declined an offer made by OpenTable to reimburse him for lost revenue and tips.

‘What incentive did this ‘rogue’ employee have?’ de Castro said in an interview in March.

‘He wasn’t in sales, he didn’t get bonuses. It just doesn’t make sense that this employee would do this out of spite.’