Lord Martin of Springburn, former speaker of the House of Commons, has died, his family said.

The 72-year-old died on Sunday morning after a short illness, his son Paul Martin confirmed.

Lord Martin of Springburn (pictured in 2007), former speaker of the House of Commons, has died, his family said

‘We would be grateful for our privacy to be respected at this difficult time.’

Michael Martin – named Lord Martin of Springburn after the Glasgow constituency he represented from 1979 to 2005 – was Speaker from 2000 to 2009.

In October that year, the former Labour MP joined his predecessor as speaker, Baroness Boothroyd, on the crossbenches.

Although by tradition speakers are elevated to the Lords, the decision to grant Lord Martin’s peerage proved controversial with some speculation the honour should be withheld.

When he was speaker, he was criticised for leading efforts to block the publication of MPs’ expenses, and for his handling of the affair once the revelations began.

He was the first Commons speaker to be forced to resign in 300 years.

Lord Martin was succeeded by John Bercow, who has paid tribute to his predecessor on hearing of his death.

He said: ‘I’m very sorry to hear this news. Michael was a decent, public-spirited man who had a real care and concern for Members, their staff and the staff of the House. 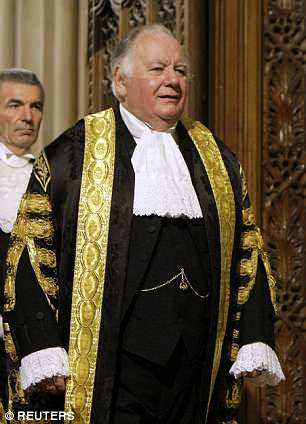 ‘He was a good campaigner and both passionate about and proud of his roots. He also had a great sense of humour.

‘On a personal level, he was always very kind to me – I still remember the lovely letter of congratulations he sent to me after my election as Speaker.

‘My deepest sympathies go out to Mary, his children and grandchildren.’

He said: ‘I am saddened to hear the news of Michael Martin’s passing. He was an authentic working-class voice in Parliament for many years.

‘He never forgot where he came from, the community he served and the trade union movement, which gave him his education. My thoughts are with his family at this time.’

Nicola Sturgeon added: ‘Very sorry to hear of the death of former Glasgow MP and Speaker of the House of Commons, Michael Martin. My condolences to his family.’

Jeremy Corbyn on hearing of the loss said:  ‘I’m very sorry to hear of the death of Michael Martin.

‘We first met as organisers in the National Union of Public Employees, campaigning for decent public sector pay and the national minimum wage.

‘Michael loved his community and family. Our thoughts are with them at this time of great sadness.’