The row over Team GB’s disastrous performance in the rowing at Tokyo 2020 has seen greats of the sport such as Sir Steve Redgrave and James Cracknell question the decision to let coach Jurgen Gruber leave just 11 months before the games – while others celebrated the exit of their ‘ruthless’ former boss they claim ‘destroyed their souls’.

The fearsome German, 74, raised in Stasi-controlled East Germany after the Second World War, became Team GB’s head coach in 1991 and is the most successful Olympic rowing trainer in history helping 20 British Olympic champions to 33 gold medals.

Mr Grobler, who famously forced athletes to swap their Full English breakfasts for prunes and made them train so hard some were sick in their boats in sessions described as ‘going to hell and back’, left his job during the pandemic after the Olympics were postponed by a year.

The legendary rowing coach was accused of ‘destroying’ his athletes in the bloodletting that followed Britain’s worst Olympic regatta since 1976. The team – funded by £24.6million of Lottery money over the last five-year cycle – managed just two medals, a silver and a bronze, to finish 14th in the medal table.

This week the coxless fours failed to win gold in the class for Team GB for the first time in 21 years, and they missed out on a medal when a member of the crew ‘forgot to steer’.

This disastrous return is a massive hit after topping the table in both London and Rio, when Grobler was still chief coach.

And Sir Steve Redgrave fears that standards may have dropped since he left. He told the Telegraph: ‘It may be that the approach has gone a bit soft. If we want a soft approach, we will have to expect softer results. Jürgen was asked to leave. As well as Paul (Thompson). If you ask two of the best coaches the world has ever seen in any sport to leave, both within two years of this Olympics, then you deserve what you get’.

There was also a row after Mr Grobler’s policy of picking teams himself was moved to a selection panels doing it instead. Sir Steve said: ‘We’ve moved back to the ’70s and ’80s, and we have to accept ’70s and ’80s results’.

Former Team GB rowing head coach Jurgen Grobler (pictured centre) has been accused of ‘destroying’ his athletes by former oarsman Josh Bugajski – but the first games he’s not involved in have been a disaster for the UK. Sir Steve Redgrave fears that allowing Grobler to leave has led to the team going ‘soft’ 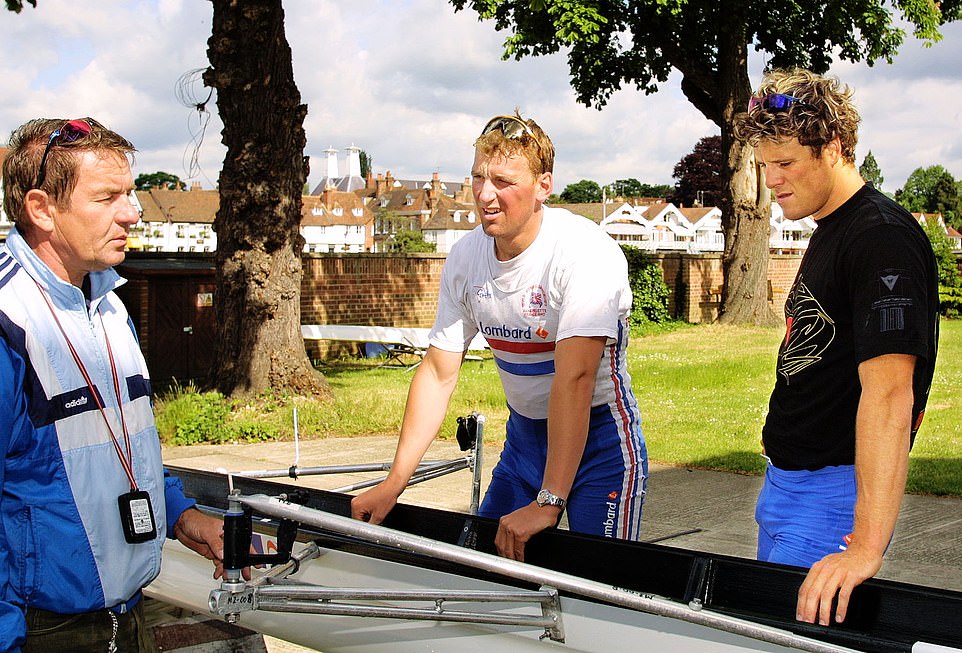 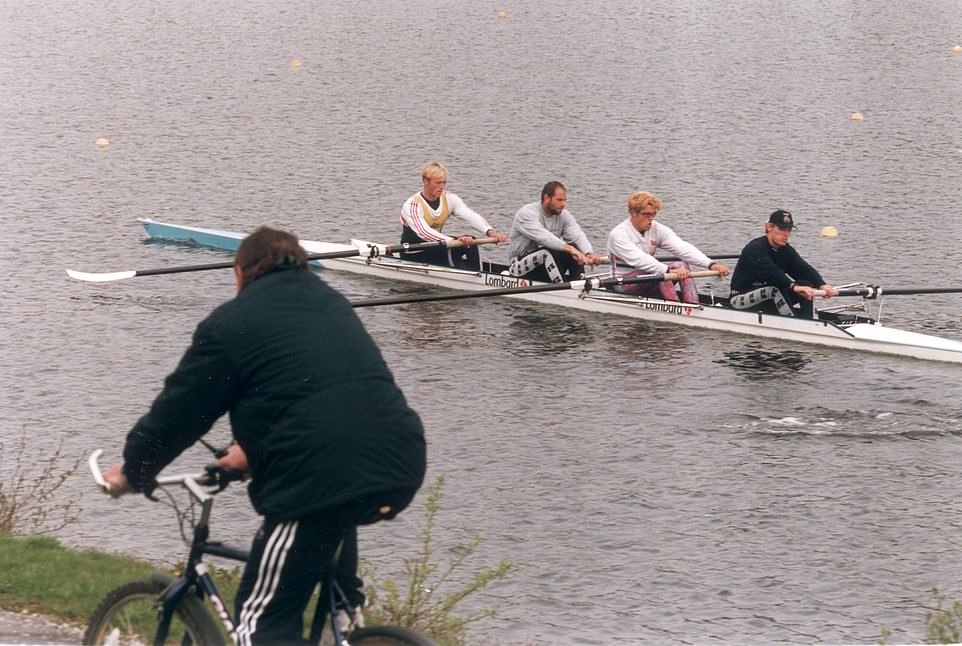 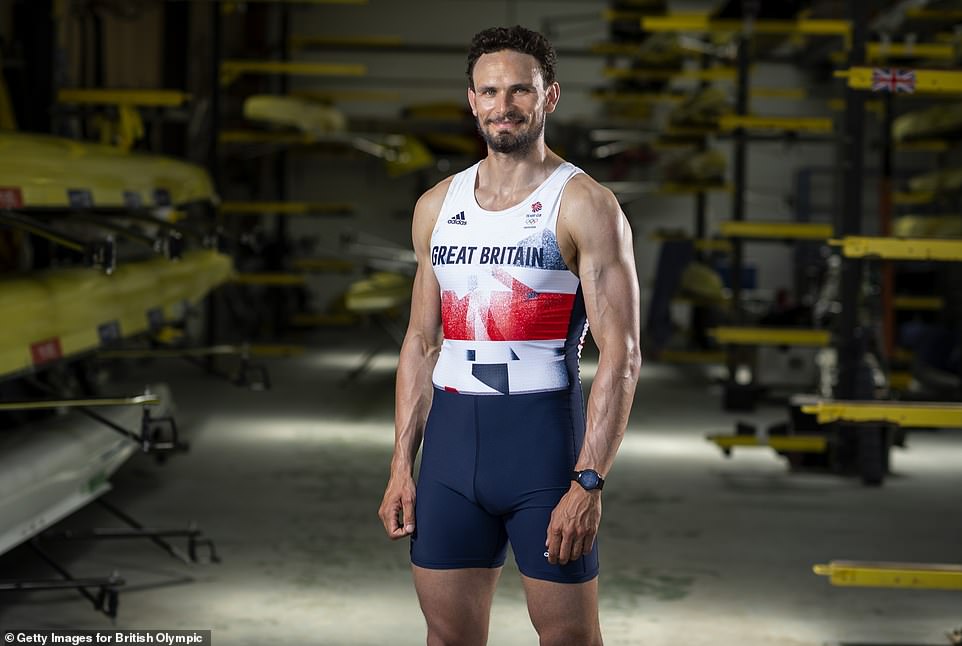 In a searing attack, Bugajski said he had ‘complete power’ and took a disliking to people 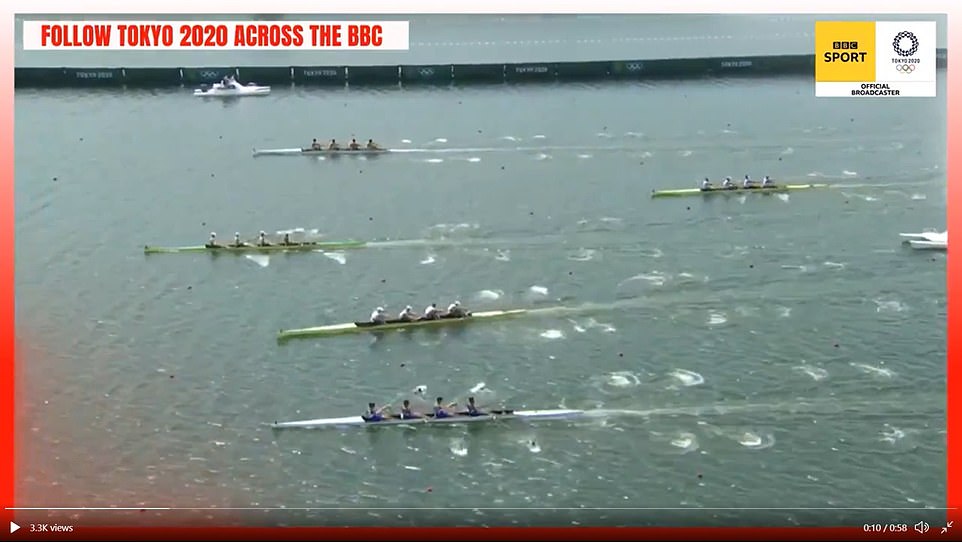 The East German who grew up when the Stasi had a tight grip on the country coached gold medal crews at every Olympics he attended since 1972 – a record without equal in the history of the sport.

But he left the British programme last August after failing to agree the terms of an extended contract amid a war over the culture of the organisation.

James Cracknell was also shocked by his exit less than a year before the games.

He said: ‘When I heard that Jurgen Grobler had left British Rowing, I went through something akin to the stages of grief – a bit of denial, some anger, a hope that he could be talked around and a bit of gloom.

‘The overriding feeling was that, surely, it could not have been the governing body’s decision. Why would you shed that level of medal-winning experience the year before an Olympics which was already shrouded by so much uncertainty?

‘It seemed crazy to let a man with that level of expertise walk out of the building before a Games where everything is up in the air due to Covid.

‘That said, the effect of allowing Jurgen to leave is, so far at least, writ large in the results: the first time he was not present, Britain’s run in the coxless four did not just end, but saw us fail to get on the podium at all’.

One of his former oarsmen, Josh Bugajski, who won bronze in the men’s eight on Friday, hit out at the 74-year-old’s methods, saying: ‘I will admit, he’s a good coach to some people.

‘But there were some people he just seemed to take a disliking to. What he did to them was just destroy them – destroy their soul, destroy everything they had.

‘He had complete power. If you didn’t get funding for a boat, your funding was never going to go up’, he said.

‘I was pretty much broke for a year or so. My relationship suffered, my friendships suffered. Everything suffered. I’m very grateful to have a wonderful fiancée, a wonderful family back home. They look after me whenever they can.

‘I cracked open a bottle of champagne when Jurgen retired. I had three very dark years under him.

‘And I think I’d be a coward if I didn’t say that on behalf of the guys who are stuck at home because they got a darker side of Jurgen and aren’t in the team.

‘We were made to jump through hoops that other people were not made to go through and we suffered as a result. 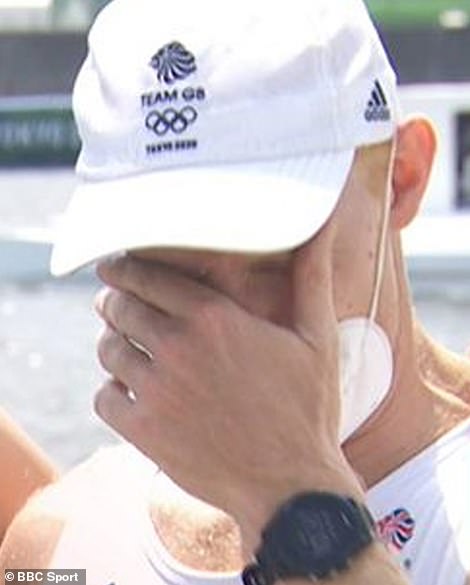 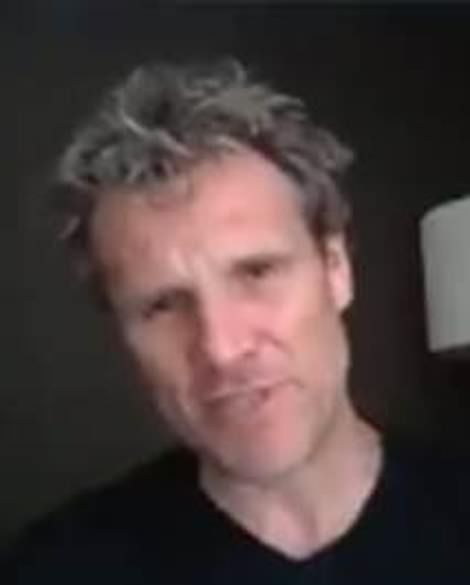 Oliver Cook broke down in tears and claimed he was partially to blame for the end of Team GB’s dominance in the coxless four, due to his steering error near the end of the race. James Cracknell, who won two golds in the same event in 2000 and 2004, was eviscerating in his appraisal of the performance, saying: ‘Someone in the British crew blew up. The only way your steering goes like that is when somebody totally runs out of juice’. 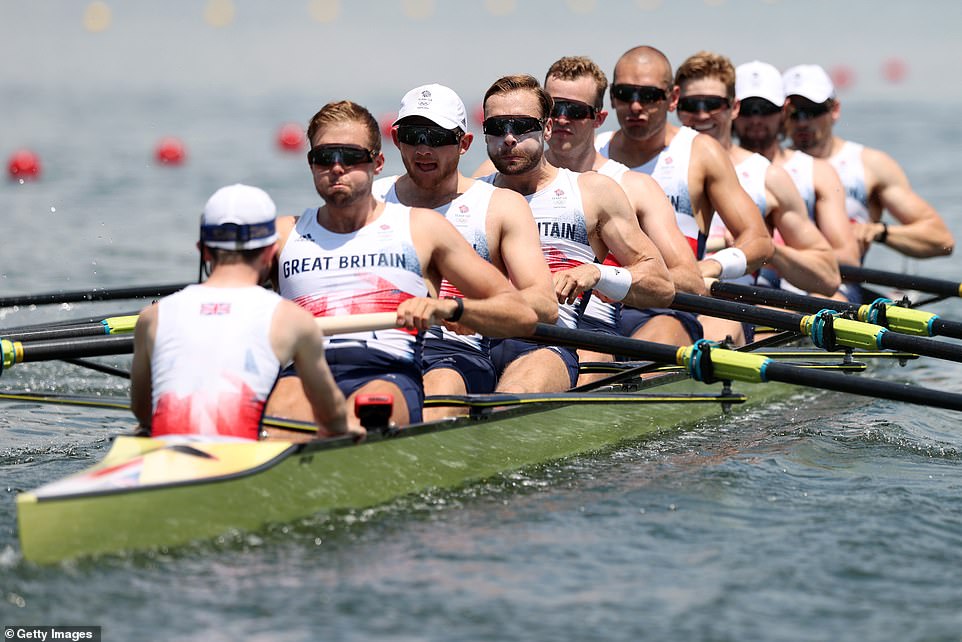 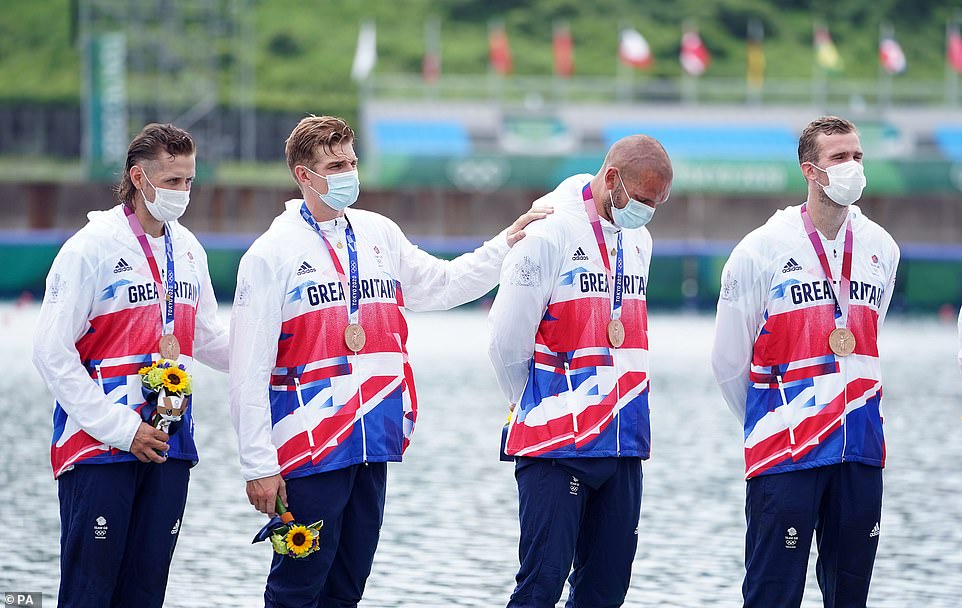 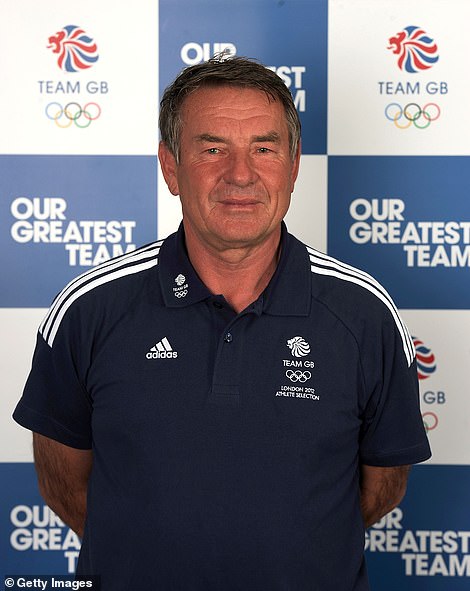 ‘It is the end of an era but in a good way. It is a satisfying relief.’

Mr Grobler has previously admitted he was tough – but denied he was a bully.

Grobler’s training regime was particularly punishing. One involved said: ‘He would push the rowers to hell and back so much that they would regularly get out of the boat at the end and be sick or almost pass out’.

And describing his style in his own words, Mr Grobler said: ‘You have to be a good teacher to motivate them without bullying them. you can have nice guys, fantastic atmosphere in the training, everyone loving each other and joking – but no results means no money.’

Olympic champion from 2016 Mo Sbihi, who also rowed in the eight, dedicated his medal to Grobler, who turns 75 on Saturday.

‘I respect him as a human being and I spoke to him this week,’ said Sbihi, who carried the flag at the opening ceremony a week ago.

And Vicky Thornley, who finished fourth in the single sculls at the Sea Forest Seaway on Friday after winning a gold medal in the double sculls four years ago, also stuck up for her Grobler, saying: ‘I don’t know why Jurgen left at that point. I was gutted. He was a great mentor my whole career.

‘I am grateful for his advice and I still hear his voice in my head.’

The split in the camp comes 48 hours after the men’s coxless four finished an ignominious fourth, surrendering a title Britain had held stretching back to 2000, when Sir Steve Redgrave won the last of his five gold medals.

That led to one of the losing crew members Matt Rossiter accusing legendary rowers Sir Matt Pinsent and James Cracknell of being ‘smug’ about the defeat. 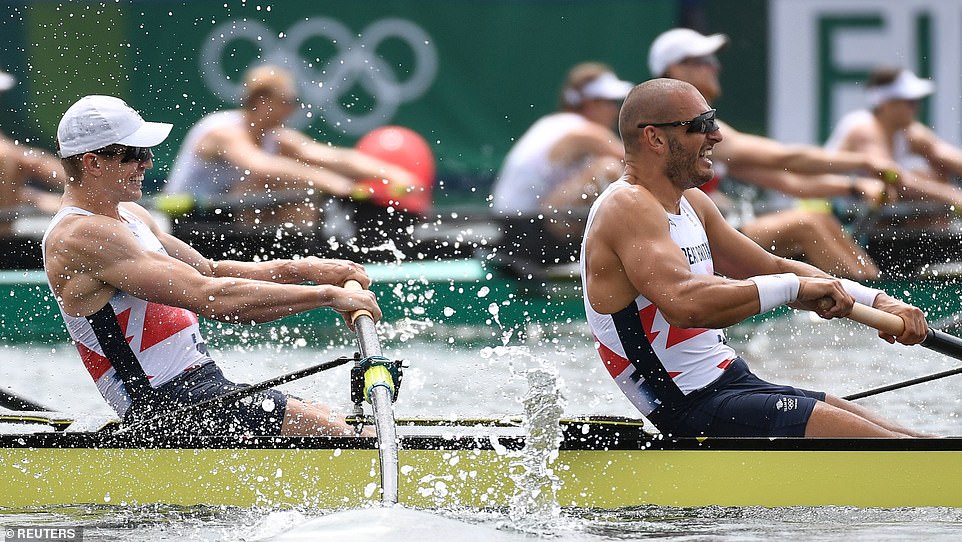 Mo Sbihi (right) had good words to say about Grobler, dedicating his medal to him 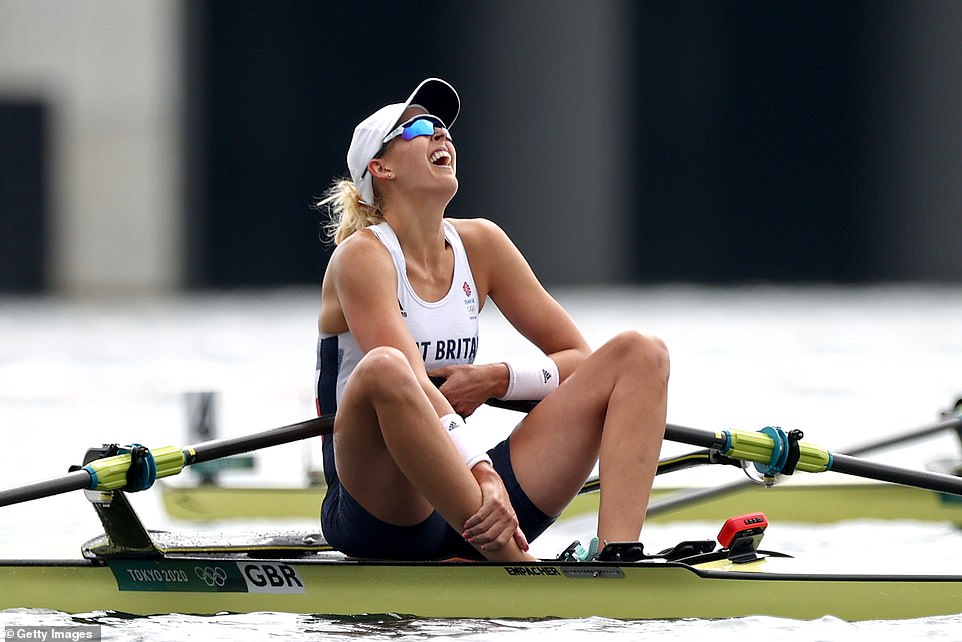 Vicky Thornley, who just missed out on a medal in the women’s single sculls, said she was gutted when Grobler left last year

Addressing the crisis, British Rowing performance director Brendan Purcell said: ‘We are a programme in transition. We were talking with Jurgen about where we were moving forward. He decided it was the right time to move on.’

Asked if the old regime was too tough, Purcell said: ‘Reality is, a performance environment needs to achieve exceptional performances. For people to explore their limits needs a balance between support and challenge.

‘For every individual, that’s a difficult mix to find. Some people thrive on challenge 24 hours a day. Some don’t. I don’t think we always got that balance quite right.

‘If you want to be the world’s best, these guys are going to go away and be really frustrated, disappointed, heartbroken and you can’t just go through the motions, you have to go beyond where you think your limits are and sometimes that’s going to mean someone helping to nudge you when you think you can’t do any more.

‘We will ask ourselves some tough questions and I will bring in some external experts like (former cycling boss) Peter Keen who knows more about performance environments in sport than a lot of people. And also bring in athlete mentors.’