A former vegan has claimed that she started balding because her plants-only diet left her with vitamin deficiencies, and she now credits eating raw animal organs for saving her from poor health.

Erica Dobeck, 22, from Redondo Beach, California, had been vegan for a year when she began to notice a deterioration in her health that drastically affected her appearance, including her hairline.

‘I hit what I considered rock bottom with my skin and had huge cystic volcanoes all over my forehead and cheeks,’ she said. ‘I’d also lost my period and my nails had white slashes in the middle of them, meaning I was very deficient in zinc.’

Carnivore: Erica Dobeck, 22, from Redondo Beach, California, has credited eating raw organs with helping to save her health after a year of veganism 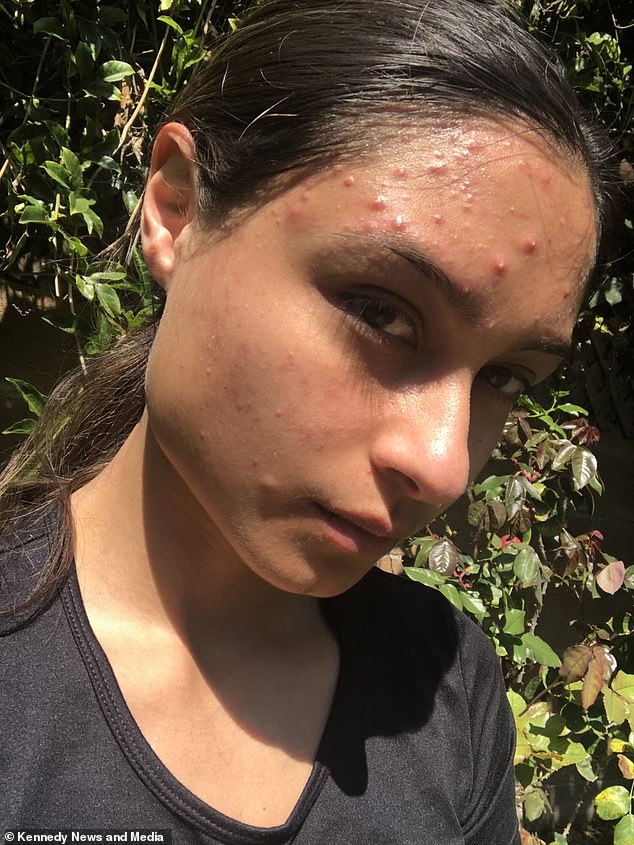 Throwback: The social media worker said her plants-only diet drastically affected her appearance, leaving her with cystic acne, a receding hairline, brittle nails, and no period

The social media worker sought help from a doctor in October 2019, after suffering from skin problems as well as low energy and symptoms of vitamin deficiencies.

‘I decided to see a dermatologist about it and she gave me a brutally honest assessment – she informed me that I must start eating animal products again to save my health,’ Erica recalled.

‘She also called me out for having a receding hairline and looking like a middle-aged man because of it. I appreciated her honesty.’

After that appointment, she started doing research about omnivore versus carnivore diets. She found videos of people who discredited plant-based diets and claimed they suffered from them.

They promoted eating raw animal organs as the ‘best source’ of vitamins and minerals, convincing her to try it out.

‘A few months later, after mustering up some courage, I went to the farmers market and bought some liver,’ she said. 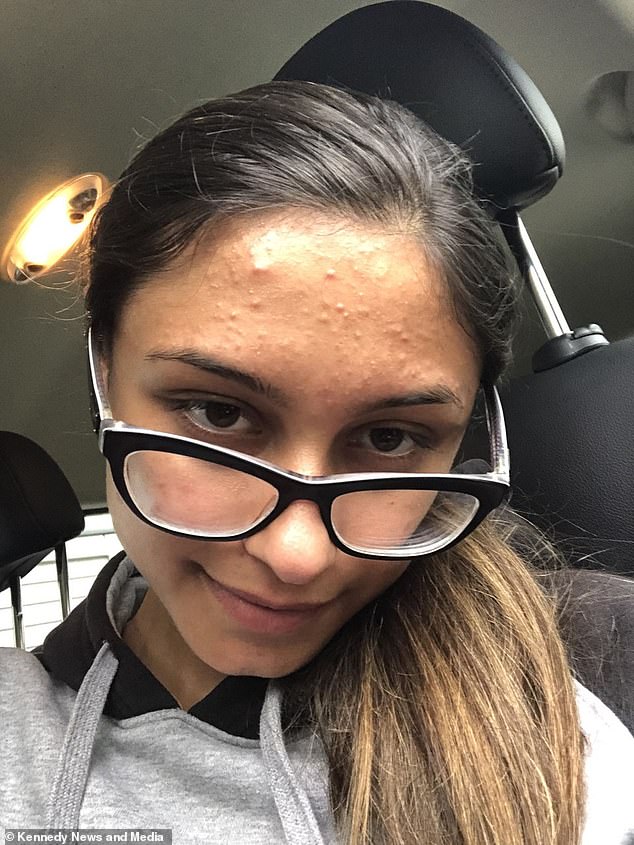 Recommendation: In October 2019, she saw a dermatologist who told her she needed to start eating meat again to ‘save her health’ 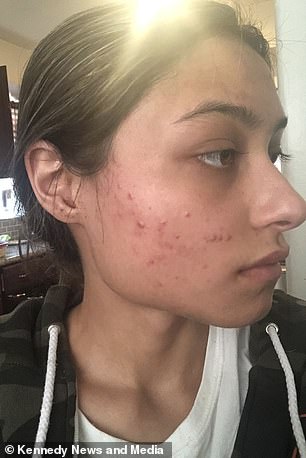 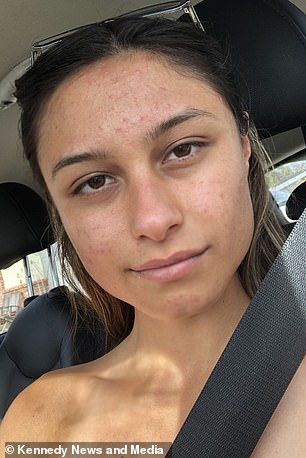 Hard to handle: The dermatologist bluntly told her she looked like a ‘middle-aged man’ with her receding hairline

Erica tried her first piece of raw offal in February 2020, but she was repulsed by the taste of raw beef liver and gave up.

‘The first time I took a nibble of raw liver I hated the taste and the texture so much I threw the rest out,’ she said.

‘But YouTube kept recommending videos of other raw organ eaters and their testimonies of liver curing depression and acne convinced me to try it again and increase my intake each week.’

Erica gave it another go two months later and this time stuck to the extreme diet, which costs her a whopping $640 a month, including her ‘normal groceries’ and offal cuts.

She gradually built up her consumption to give her gut bacteria time to adjust, starting off with just a bite. She now eats a palm-sized serving of raw offal twice a week.

Erica said she would eat more if it wasn’t for the ‘inconvenient’ defrosting process and unpleasant taste. 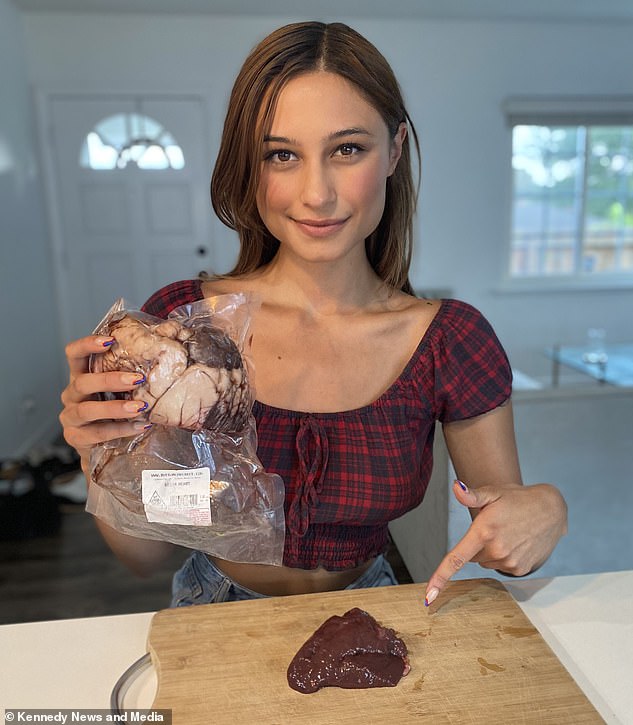 Change of pace: Through online research, she learned about eating raw organs as a source of vitamins and decided to give it a try 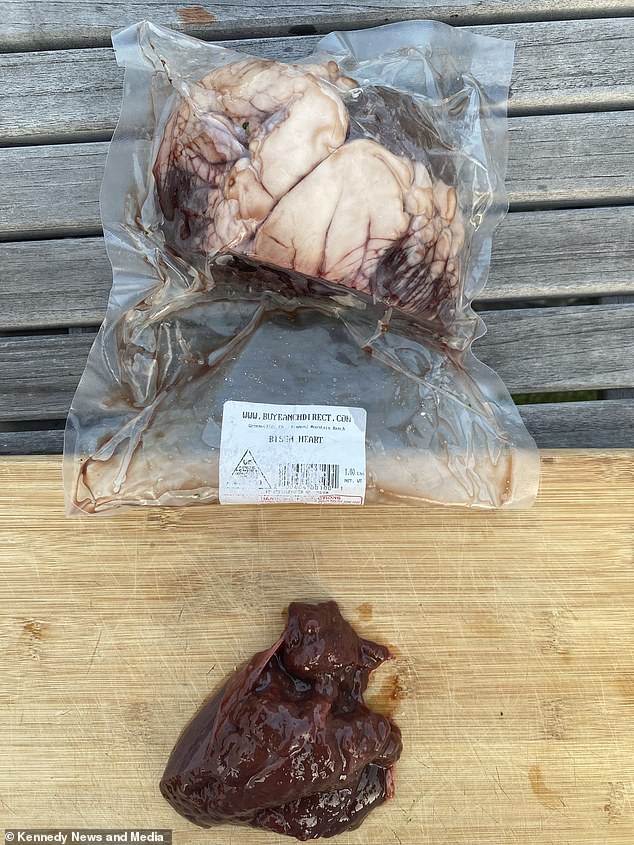 Yuck: Erica tried her first piece of raw offal in February 2020, but she was repulsed by the taste of raw beef liver and gave up

‘I remember the first time I was able to eat a whole serving size of liver, the size of your palm, and how amazing I felt from it. I was so energized and happy,’ she said.

‘Beef liver makes me feel the best, especially when combined with organic berries and raw cow milk blended in a smoothie, so I eat it more than other organs,’ she added.

‘The high vitamin B content is to praise for the beautiful, euphoric feeling I get. I realized sacrificing taste is indeed worth the benefits I received and there was no going back after that – organ meat became a staple of my diet.’

Although she faces negative comments about her raw organ consumption, she insists that the health benefits she has experienced are worth it and make her willing to sacrifice taste.

‘I don’t like to consider myself a former vegan anymore because I realize that being vegan implies a moral impetus to view animals as friends,’ she explained.

‘Animal cruelty was never the reason why I wanted to cut out animal products. I was instead driven by the perceived mental and physical benefits I would receive from being plant-based.’ 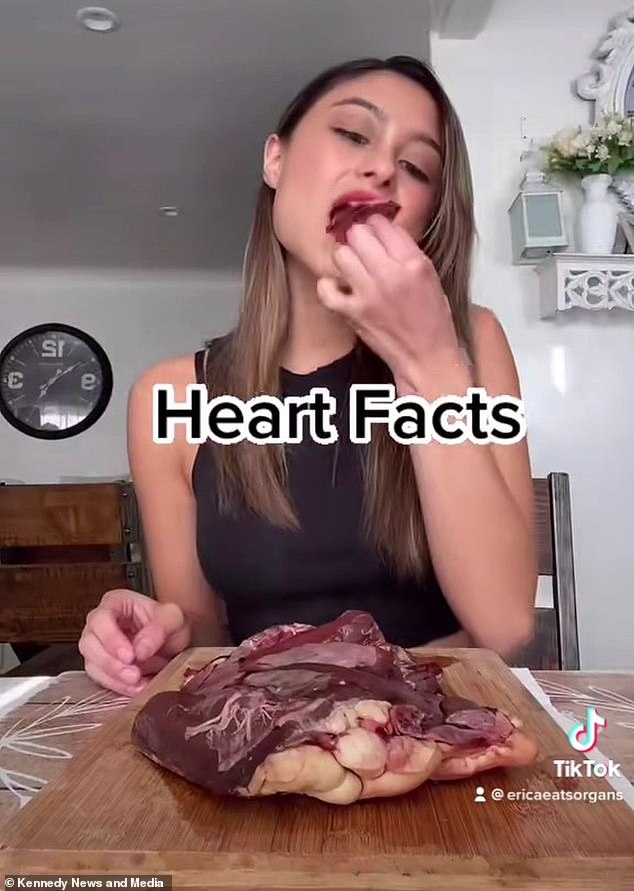 Back at it: Erica gave it another go two months later and this time stuck to the extreme diet, She now shares TikTok videos of herself eating raw organs, a number of which have gone viral 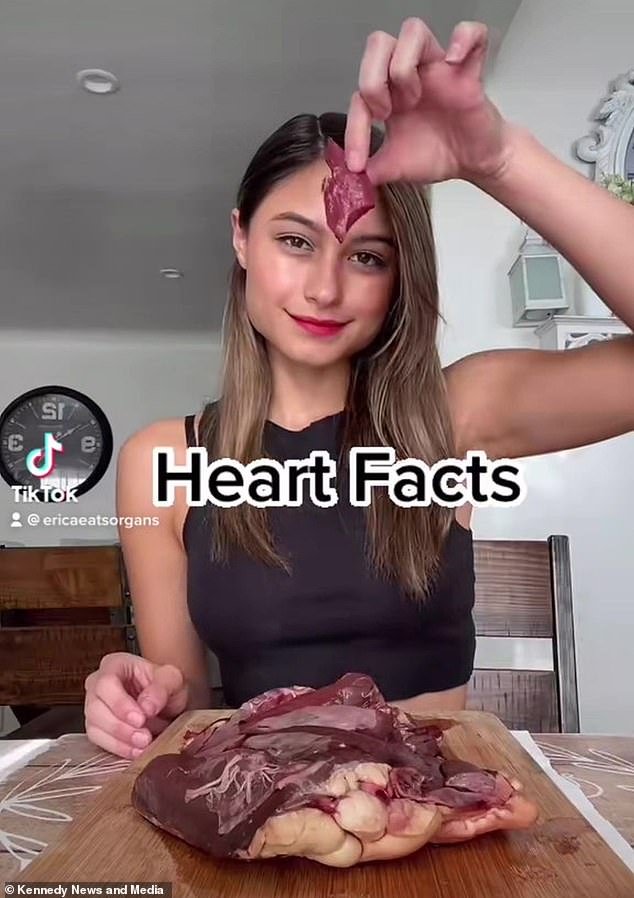 Plan: ‘I mainly eat liver twice a week, but sometimes I swap it out for bison heart or a grounded mix of liver, heart, and kidney,’ she said 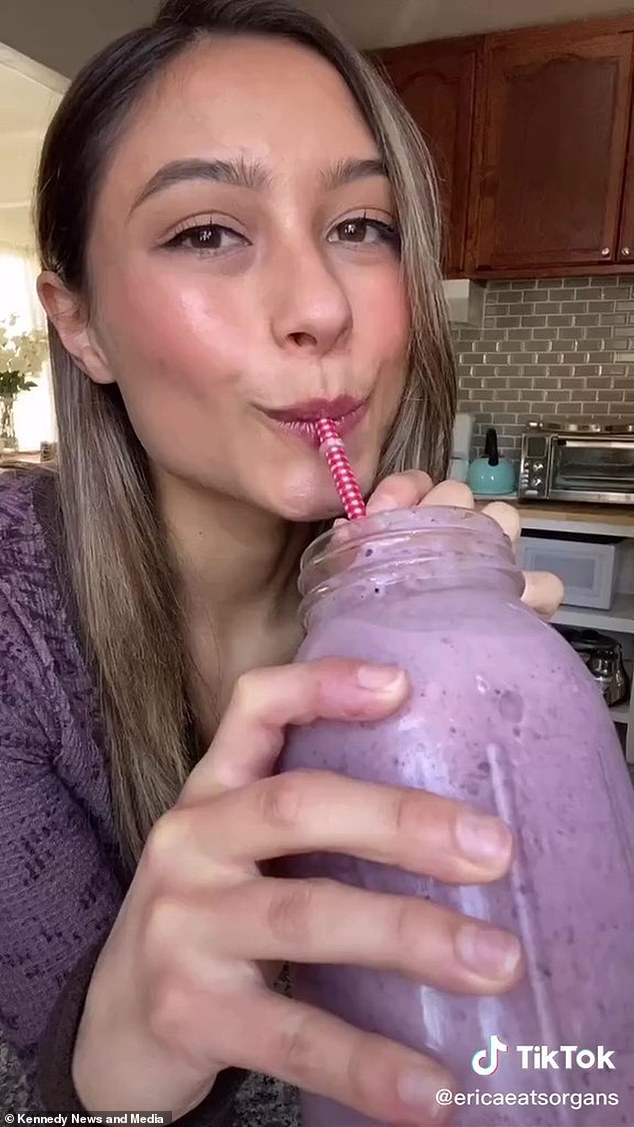 Bottoms up! ‘Beef liver makes me feel the best, especially when combined with organic berries and raw cow milk blended in a smoothie,’ she said

Erica said she eats like the ‘average healthy American’ the majority of the time and consumes ‘normal’ foods, including vegetables, fruits, muscle meats, and some grains.

‘About two times a week I eat what most consider unconventional and therefore disturbing – raw organs and raw dairy products,’ she said.

‘I mainly eat liver twice a week, but sometimes I swap it out for bison heart or a grounded mix of liver, heart, and kidney.’

To ensure good quality, the offal fanatic buys grass-fed meat from local farmer markets. Grass-fed means the animal was exclusively fed grass rather than grain. It is believed to make the meat lower in calories and higher in vitamin content.

Erica said learning about the host of physical and mental benefits of eating raw animal organs was the driving force behind her diet.

‘Nutrients from plants are not as bioavailable as the animal forms of nutrients are. Raw organs, in particular, have beneficial bacteria and increased nutrient content,’ she said. 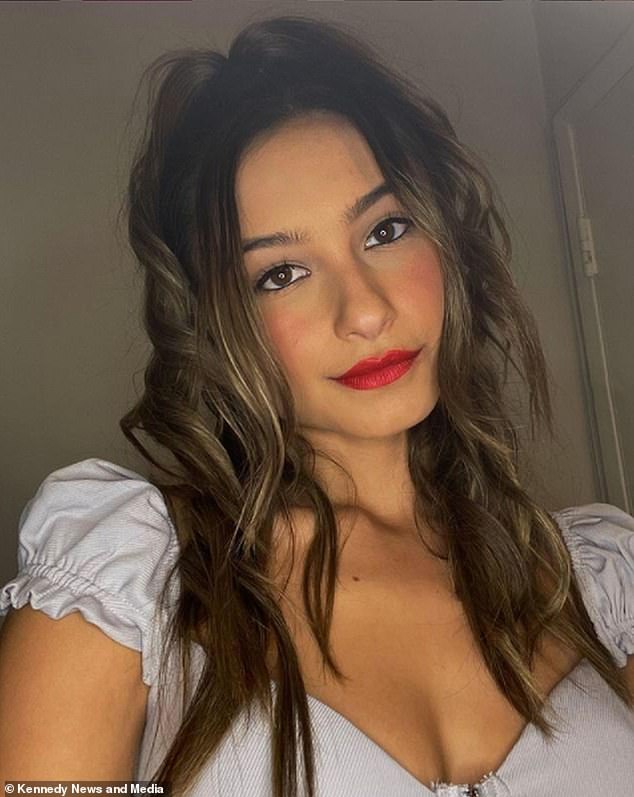 Feeling good: Erica said learning about the host of physical and mental benefits of eating raw animal organs was the driving force behind her diet

Happy: She insisted that raw beef liver makes her feel ‘euphoric’ because of the B vitamins in the meat 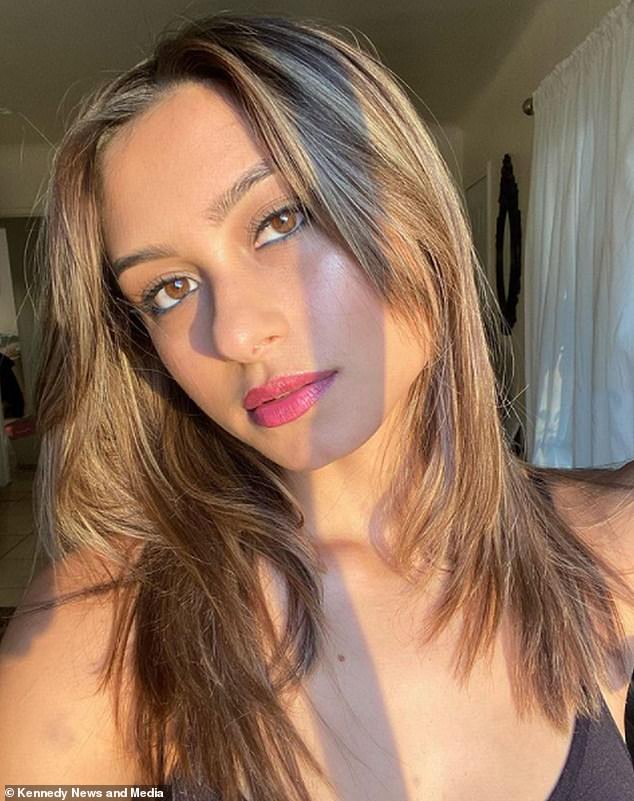 Looking good: Erica has credited her unusual diet with helping her to regrow her hair and heal her acne

‘Vitamin A, for instance, has a plant form beta carotene and in animal form retinol. The body needs to convert beta carotene to retinol so this is less efficient and some people can’t convert it at all.

‘When looking at the nutritional profile of liver compared to other foods, liver is the highest in the nutrients our bodies need, including vitamin A and copper. It also contains CoQ10, a nutrient that is especially important for cardiovascular function.

‘Beef liver makes me feel euphoric because of the high B vitamin content – B6 is a major player in mood and helps the body to produce serotonin and B9 helps keep depression at bay.

‘B12 also adds to the euphoric feeling because it is responsible for helping your body produce energy.’

Erica has been posting about her unconventional diet on TikTok, and a number of her videos showing her drinking liver smoothies and eating bison heart have gone viral.

She has received a mixed reaction but remains unfazed by negative comments and said she just wishes more people would try it out to experience the ‘euphoria’ she does. 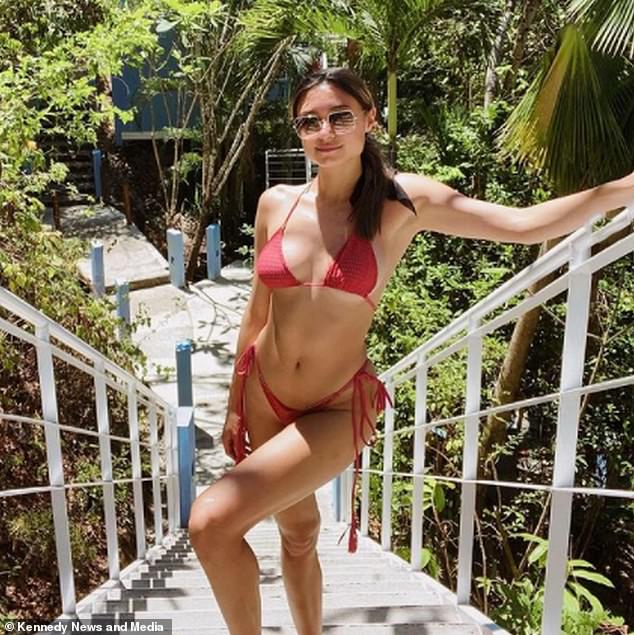 Thoughts: Erica said she doesn’t mine the negative comments she received, noting that she feels ‘sad’ for people who are ‘missing out on something that can literally change their life’

The singleton also shared that most dates respect her bold choices and the contentious topic helps to rule out any unsuitable relationship candidates.

‘The reactions are definitely mixed. Some admire and love it while others hate it because they think it’s gross and wonder if I’m mentally stable,’ she said.

‘Although I get hate comments they don’t really faze me, if anything they entertain me. Someone commented ‘to the electric chair’ in one of my videos, and I liked that they were at least creative. It actually cracked me up.

‘When you feel good doing something there really isn’t much desire for validation from strangers on the internet.

‘I understand why a lot of people find it gross and are confused because it is unconventional, so I don’t take the disgusted reactions too personally.

‘I just feel a bit sad that they are missing out on something that can literally change their life.

‘A lot of the guys that I have gone on dates with and told have respected it. If a guy didn’t want to pursue me further solely because I eat raw meat then I know he isn’t the one for me anyway, so it’s a good way to filter out contenders.’