Exactly how often you should replace everything in your bathroom

You should be replacing your towels every one to three years and swapping out your shower curtain every three to six months, a team of bathroom experts have revealed.

Australian lifestyle company Bed Threads shared how often common items in the bathroom, including toothbrushes, bath mats and loofahs, should be replaced in order to maintain hygiene and prevent health issues.

It’s recommended to replace bath mats every two years and your toothbrush every three to six months to reduce the likelihood of a build-up of bacteria and unwanted particles.

You should be replacing your towels every one to three years and swapping out your shower curtain every three to six months, a team of bathroom experts have revealed

According to the Bed Thread experts, towels that are made from good quality material and are cared for well should last between one to three years.

One way to determine whether a towel should be replaced is whether there’s a lack of absorbency and an unpleasant odour.

The Modern Bathroom interior team agreed and said ‘towel fibres inherently break down with use’ and if the product isn’t absorbing water properly, it’s a sign it needs to be replaced.

‘You use bathroom towels when your body is at its cleanest, so the last thing you want is to put bacteria right back on your skin,’ experts said online.

Experts insist on upgrading to linen towels as this material often lasts longer. 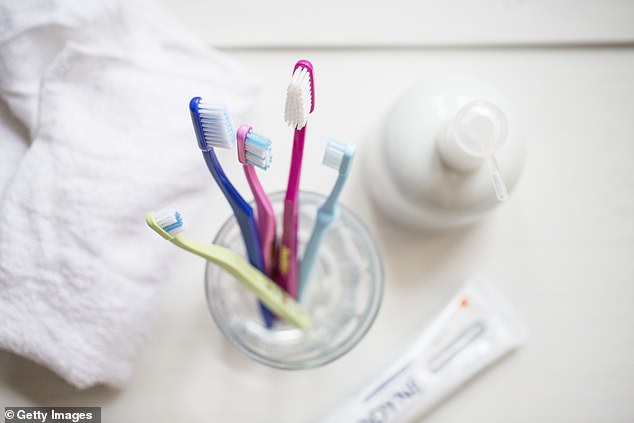 Bed Threads recommends changing this product every three to six months. A decent and effective toothbrush should have neat bristles and should be stored in a clean, dry place

Toothbrush: Every 3 to 6 months

It’s commonly known that you should  replace your toothbrush with the change of season, but Bed Threads recommends changing this product every three to six months.

A decent and effective toothbrush should have neat bristles and should be stored in a clean, dry place to reduce the growth of unwanted bacteria.

But a toothbrush should also be replaced if you’ve been sick to minimise the growth of other bad bacteria.

Some shoppers are also opting to buy bamboo toothbrushes as an environmentally friendly option, despite being more expensive and ranging between $4 to $15 each.

THE SEVEN ITEMS YOU SHOULD NEVER HAVE IN YOUR BATHROOM

1. Your phone: It’s best to keep tech away from water for obvious reasons, but it’s also important to relax and unwind without distraction.

2. Medicine: It’s best to keep medication out of humid environments.

3. Towels: Bathroom towels can start to smell stale if they are constantly in a humid environment. They are best kept in the laundry or hung outside to dry.

4. Razors: These should be in a dry spot so they don’t rust.

5. Toothbrush: Toothbrushes should be kept out of the bathroom to protect them from the bacteria, heat and moisture in there.

6. Robe: If these are kept in the bathroom they will develop a ‘musty’ smell.

7. Fragrances: The smell can deteriorate if they are stored somewhere with fluctuating temperature and light.

Bath mats often have a lifespan of two years because they are made to last.

It’s important to wash bath mats regularly as they often retain a lot of dirt, dust and particles, though if washed too frequently this may impact the longevity of the product.

Experts from Bath Planet agreed and said washing the bath mats once a week is enough to keep the product bacteria-free.

But if the mat is constantly getting wet from the bath or shower, this may also impact the lifespan of the item. 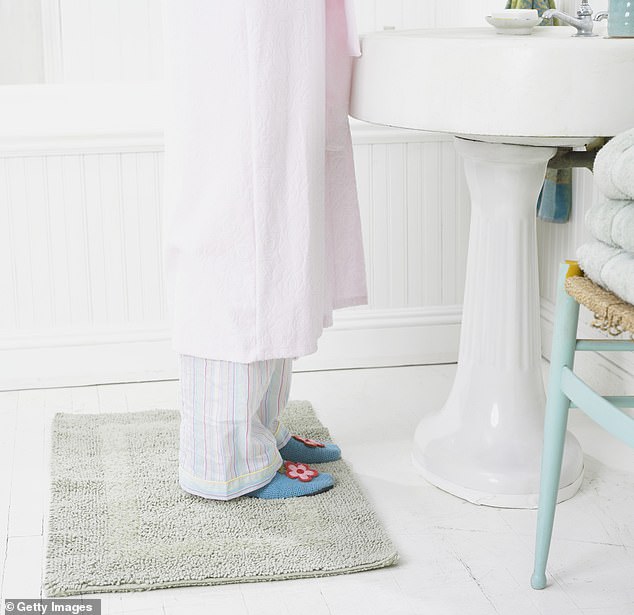 Bed Threads said bath mats often have a lifespan of two years, but if washed frequently it may impact this longevity

Shower curtain: Every 3 to 6 months

The shower curtain gets wet daily, which invites mould and bacteria to grow on the item and should be replaced every three to six months.

If the shower curtain is has a plastic liner, it should be scrubbed thoroughly by hand every month, but if it’s made from a fabric material it should be washed every few months.

But if the product has mould on it or has an unpleasant odour, it should be replaced immediately.

Loofah: Every 1 to 3 months

Loofahs are beneficial for the skin, but depending on the material it’s made from will determine how often it should be replaced.

If the product begins to smell or starts to visibly grow mould is a good sign that it’s time to throw out the loofah and replace it with another.