Pink-coloured sports drinks may boost performance by 4.4 per cent over clear fluids — even when they both contain the same ingredients, a study has suggested.

Researchers from the University of Westminster, London asked volunteers to run on a treadmill for 30 minutes while washing their mouths out with one of two drinks.

The first was a clear fluid and the second the same but with pink food dye added — with those who had the latter running 696 feet (212 metres) further on average.

Alongside this, the pink liquid was found to promote a ‘feel good’ effect which made exercising feel easier and more enjoyable over all.

The study builds on previous findings that rising one’s mouth with carbohydrates during exercise can reduce the perceived intensity of the workout.

As pink food and drink is associated with sweetness, carbs and sugars, the team suspected that the colouration, as a placebo, would produce a similar effect.

Pink-coloured sports drinks may boost performance by 4.4 per cent over clear fluids — even when they both contain the same ingredients — a study has suggested. Pictured: Tennis ace Novak Djokovic of Serbia seen drinking a pink sports drink during a 2015 match

‘The influence of colour on athletic performance has received interest previously, from its effect on a sportsperson’s kit to its impact on testosterone and muscular power,’ explained paper author Sanjoy Deb of the University of Westminster.

‘Similarly, the role of colour in gastronomy has received widespread interest, with research published on how visual cues or colour can affect subsequent flavour perception when eating and drinking.

‘The findings from our study combine the art of gastronomy with performance nutrition.

‘Adding a pink colourant to an artificially sweetened solution not only enhanced the perception of sweetness, but also enhanced feelings of pleasure, self-selected running speed and distance covered during a run.’

In their study, Dr Deb and colleagues asked participants to run at a consistent, self-selected treadmill for 30 minutes, maintaining a set rate of physical exertion.

As they ran, each volunteer rinsed their mouth with one of two low-calorie, artificially-sweetened drinks which were equal in all regards except for their colour.

One drink was clear, while the other had been tinted pink using food dye. This colour was chosen for its associations with perceived sweetness, and a corresponding expectation of an increased level of sugar and carbohydrates.

The researchers found that the subjects who rinsed with the pink drink ran an average of 696 feet (212 metres) further and 4.4 per cent faster than their counterparts who used the clear one instead. 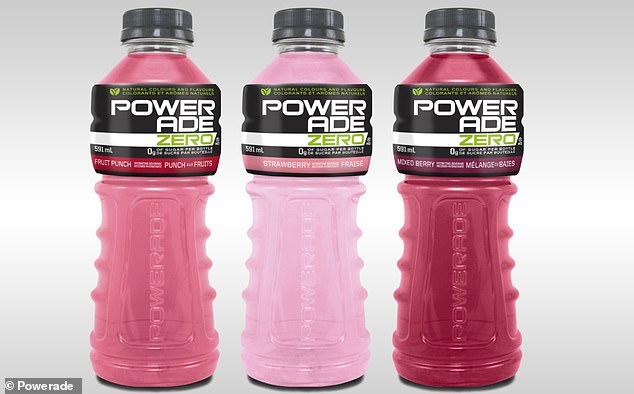 Researchers found that subjects who rinsed their mouths with a pink drink while exercising ran an average of 696 feet (212 metres) further and 4.4 per cent faster than their counterparts who used a clear drink that was, besides its colour, all but identical 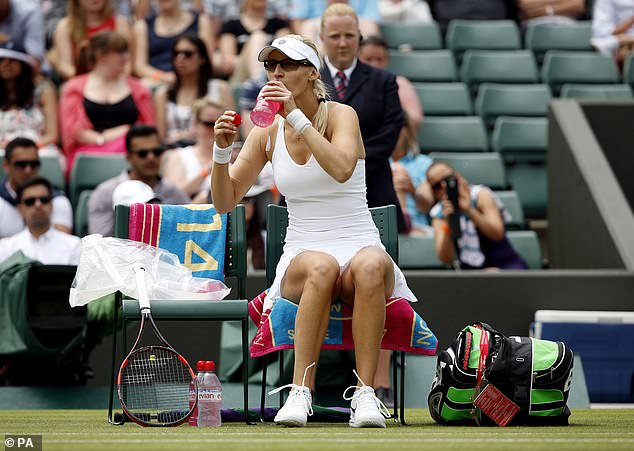 The study builds on previous findings that rising one’s mouth with carbohydrates during exercise can reduce the perceived intensity of the workout. As pink food and drink is associated with sweetness, carbs and sugars, the team suspected that the colouration, as a placebo, would produce a similar effect. Pictured: Croatian tennis pro Mirjana Lucic-Baron takes a sip of a pink-coloured beverage during a break in a Wimbledon Championship match

According to the team, the study represents the first investigation of the effect of sports drink colour on exercise performance, and may open up a new arena of research for sports scientists.

Future research, they added, will need to look into whether the placebo effect proposed in this paper causes the same reward areas of the brain to be activated as is when rinsing one’s mouth with carbohydrates.

The full findings of the study were published in the journal Frontiers in Nutrition.

More than half of young people experience side effects from energy drinks, research suggested in January 2018.

Some 55 per cent of those aged between 12 and 24 years old suffer everything from vomiting and chest pains to even seizures from the drinks, despite most consuming less than the recommended one-to-two beverages a day, a study found.

As well as the drinks’ alarmingly high caffeine levels, the researchers believe consuming them with alcohol or during exercise makes them even more dangerous, and urge for them to be banned for young children.

The scientists from, the University of Waterloo, Ontario, asked 2,055 young people about their consumption of energy drinks.

Results reveal 24.7 per cent of youngsters have experienced a fast heart rate, while 24.1 per cent have struggled to sleep, due to energy drink consumption.

Some 18.3 per cent have suffered headaches due to the drinks, while 5.1 per cent report having experienced nausea, vomiting or diarrhoea.

A further five per cent have sought medical attention due to their symptoms and 3.6 per cent report experiencing chest pains.

Alarmingly, 0.2 per cent have even suffered seizures after drinking the beverages.

Of those who have suffered symptoms, the ‘vast majority’ consumed less than one-to-two energy drinks a day.

The findings were published in the Canadian Medical Association Journal.