A New York City undertaker has resorted to sleeping in her funeral home chapel after working 16-hour shifts to cope with the onslaught caused by the coronavirus.

Lily Sage Weinrieb, 25, of International Hamilton Heights Funeral Home in Harlem, has been working 16-hour days after her clients rose 75 per cent after the the coronavirus outbreak in NYC.

Weinrieb had just finished studying at the American Academy McAllister Institute and started her career as funeral director at the morgue when the outbreak began.

Before the pandemic, the home averaged 30-40 clients per month but the number has quadrupled in recent months.

Lily Sage Weinrieb, 25, gets ready for bed, where she often sleeps in the chapel of her funeral home on May 4, 2020 in New York City 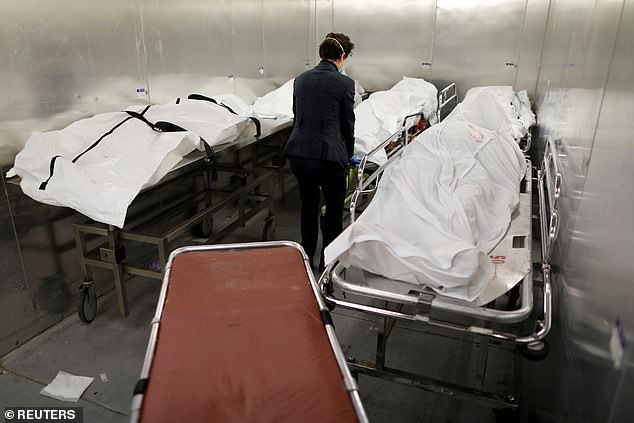 Lily Sage Weinrieb, 25, a Resident Funeral Director at International Funeral & Cremation Services, a funeral home in Harlem, retrieves a deceased person from a morgue in a hospital, while working on a night-shift during the coronavirus disease (COVID-19) outbreak, in Manhattan, New York City, New York, U.S., April 9, 2020 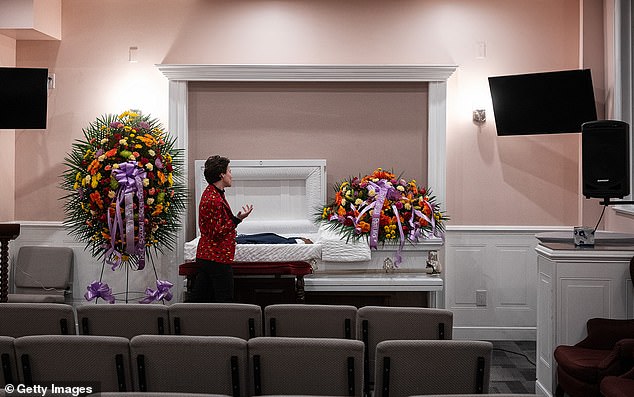 Weinrieb checks that everything is in order at the chapel, the night before a viewing on April 27, 2020 in New York City

Between transferring remains from hospitals, viewings, paperwork, embalmments, crematorium and cemetery runs, Lily works from 8am to midnight, taking rest when she can on a couch in the funeral chapel.

She said she is completely overwhelmed scheduling funerals for a month in advance and not able to do many aspects of her job like being able to console grieving relatives with a hug nor a touch and limiting numbers at viewing and burials.

‘We’re being told that we’re heroes for being on the front lines of this but I feel like I’m failing families every day,’ she told Reuters in April. 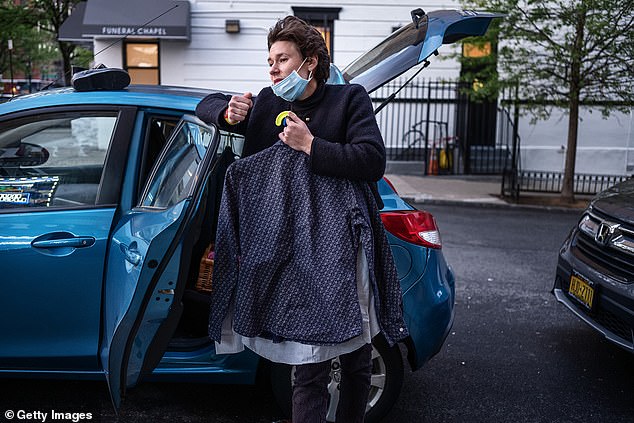 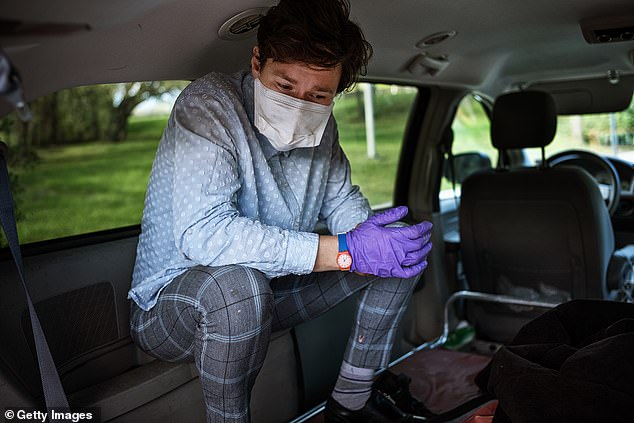 Lily Sage Weinrieb transfers remains from a NYC hospital on May 4, 2020 in New York City 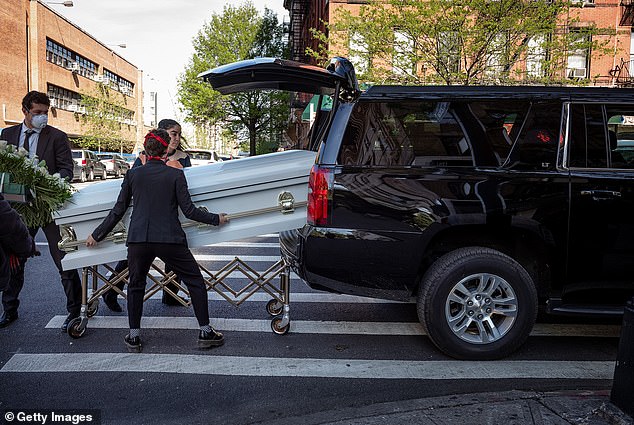 Weinrieb loads a casket into a hearse on May 5, 2020 in New York City 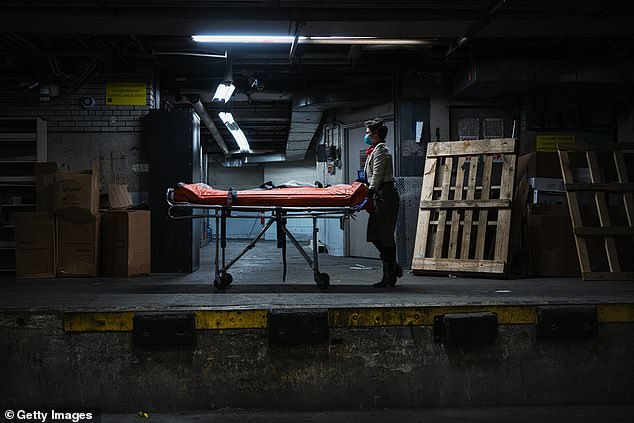 Despite these impediments, Lily attempts to find solutions such as video viewings and other ceremonies.

She was living in a shared house with friends in Philadelphia but returned to live with her parents when the crisis began.

She said she didn’t think it was right to constantly expose her housemates to the virus and her parents allowed her to move home but she said no one has hugged her for more than a month. 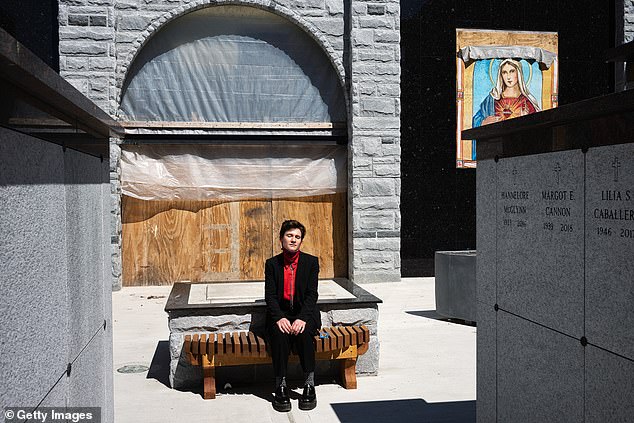 Lily Sage Weinrieb, a resident funeral director in Harlem, takes a rare break at St. Raymond New Cemetery in the Bronx on May 5, 2020 in New York City 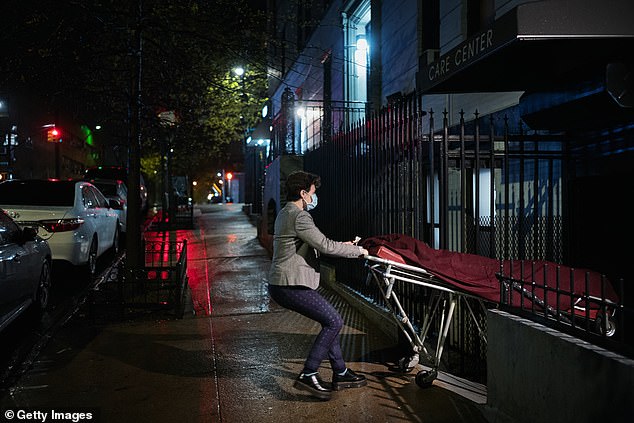 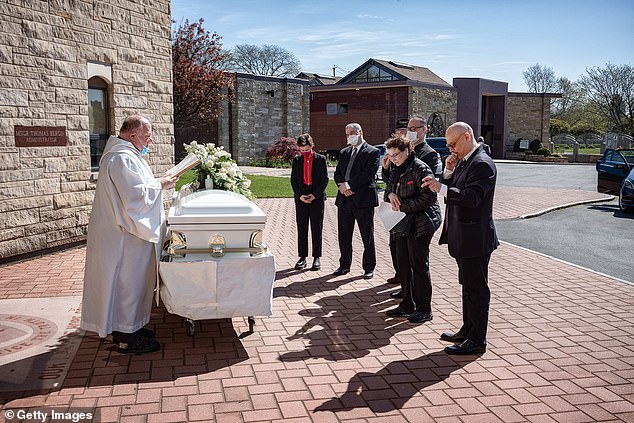 Lily Sage Weinrieb attends Aida Ramos’ entombment at St. Raymond New Cemetery in the Bronx, because of the pandemic, only five people are allowed to attend in person on May 5, 2020 in New York City

On the front lines of the coronavirus pandemic, nurses and doctors are caring for the living. But there is another front line of those caring for the dead. They fear they can also get infected and die. Some of them have sent their own children to live with relatives. And because American cities like New York were never designed to dispose of so many dead, their call of duty will last much longer.

New York, the most-populous city in the United States, has just four crematories.

Hospitals, which used to store bodies for 14 days now sometimes will only keep them for six.

Most COVID-19 victims die alone, and when they die, their families are told to quarantine. The women try to find ways for them to say goodbye.

The United States today reported more than 1.38 million cases of the coronavirus and over 81,000 deaths.