Exorcist quizzed on Pakistan rape and murder kills himself

A religious healer who had been held by police over the rape and murder of six-year-old Zainab Ansari in Pakistan committed suicide after his release.

Baba Shabir had been arrested and interrogated for ten days in connection with the brutal kidnapping and killing of Zainab which shocked the world last month.

Suicide after murder: Baba Shabir had been held for ten days while being questioned in relation to the the rape and murder of six-year-old Zainab Ansari (pictured)

Some of his followers found Shabir, also known as Chanee Pir, dead in his home yesterday, Dawn.com reports.

Shabir worked as a faith healer or exorcist, who ‘helps’ those who seek spiritual healing or who believed they have been ‘possessed’ by evil, by praying and carrying out religious rituals.

His nephew told Dawn that Shabir had become depressed after being held in connection with the death of Zainab, who was raped and murdered before her body was dumped on a trash heap in Kasur earlier this month.

He was released without charge, and police has since zoned in on a 24-year-old man who is now accused of killing up to eight young girls including Zainab.

Mohammed Imran was linked to the murder of Zainab using DNA techniques, which also matched with DNA found at seven other murder scenes. 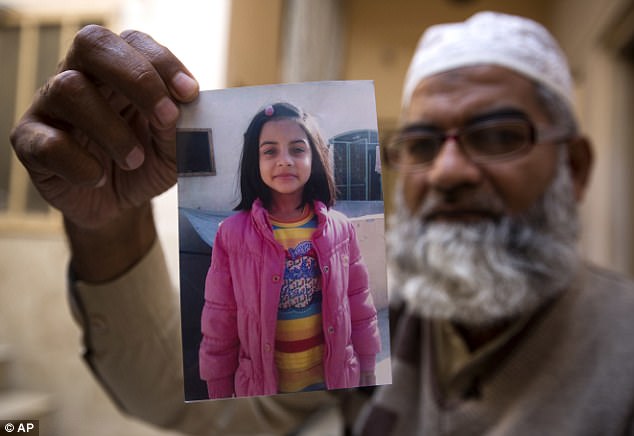 Police say DNA samples from Imran matched those found on Ansari’s body. They say the same samples also linked him to seven other murders of young girls 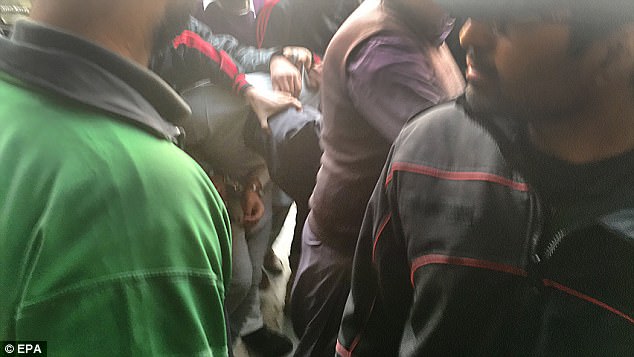 Pakistan’s chief justice has now been asked to investigate the claims, along with potential links between Imran and a minister, Dunya News reported.

Meanwhile Pakistan’s senate has been asked to pass a bill to re-introduce public hanging for people who rape or kidnap children under the age of 14.

Chairman of the Standing Committee on the Interior Rehman Malik said an amendment to an existing law had already been approved by his committee and should be put before the senate. 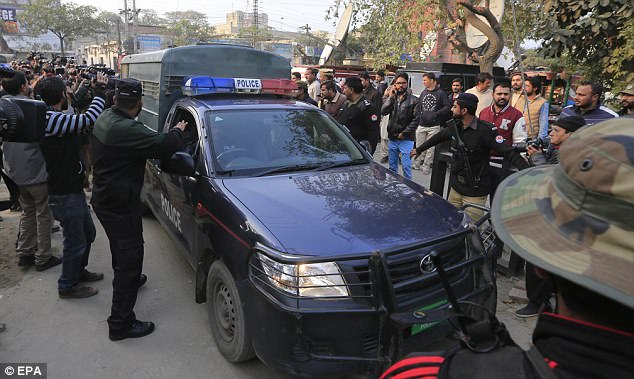 The suspect is said to be a resident of the same area where Zainab’s house is located. Pictured: Imran is ferried to court yesterday 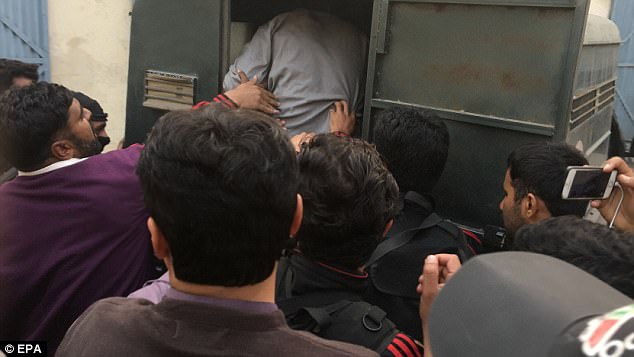 Imran has confessed to the killing, according to police. Pictured: The 24-year-old arriving at court earlier this week 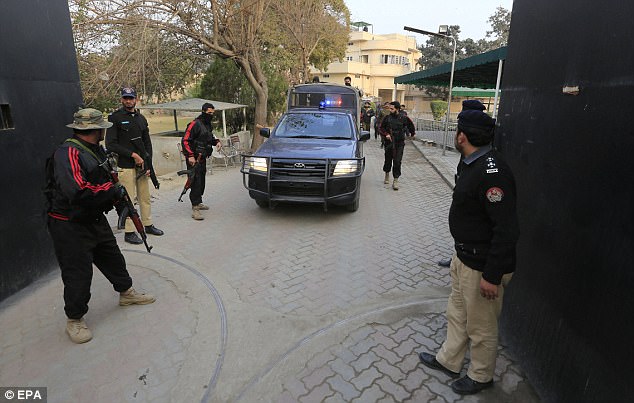 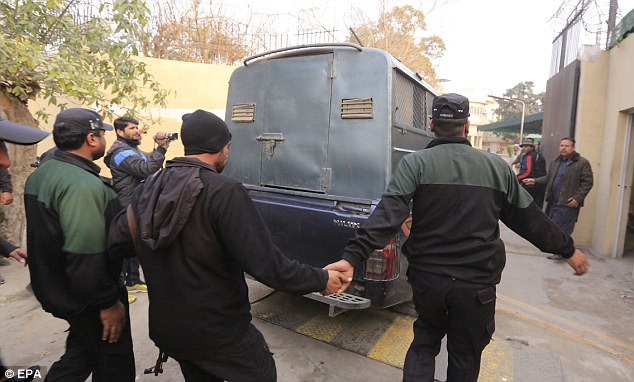 A police vehicle transporting Imran, who is suspected of raping and killing Zainab Ansari

According to Dawn News, the amendment to Section 364-A of the Pakistan Penal Code Act 1860 declares that the punishment for kidnapping or raping a child is to be public execution.

The section currently reads: ‘Whoever kidnaps or abducts any person under [the age of fourteen] in order that such person may be murdered or subjected to grievous hurt… or to the lust of any person shall be punished with death.’

The amendment seeks to add ‘by hanging publicly’ after the word ‘death’, according to Malik.

Malik explained that an example should be made out of Zainab’s murderer.

Imran’s house was surrounded after his arrest by an angry mob amid reports he had confessed to the killing.

Yesterday morning, local reports said furious residents had surrounded his house. Police were on the scene and have urged people to remain calm.

The suspect is said to be a resident of the same area where Zainab’s house is located, Dawn News reported. 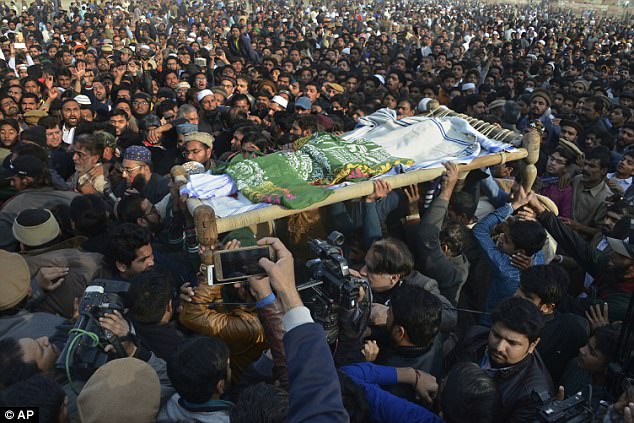 Thousands attended a funeral for the young Zainab Ansari in Kasur, Pakistan. The brutal rape and murder sent shock waves around Pakistan 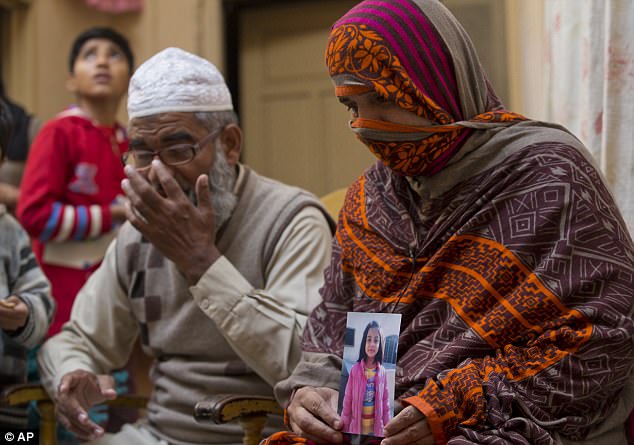 Nusrat Ansari holds a photo of her daughter, Zainab, who was raped and killed, as her husband, Mohammed Amin in Kasur, sits beside her in Kasur, Pakistan

Zainab, six, was snatched in early January as she walked to a Koran class.

CCTV footage showed her being led away by a suspect five days before she was found raped and strangled on a rubbish pile about a mile from her home in Kasur, east Pakistan.

Her parents were away on pilgrimage in Saudi Arabia, and the girl and her two sisters and brother were watched over by her aunts and uncles who all live in the same house in an impoverished neighborhood of narrow lanes on the outskirts of the city.

A police district official told Al Jazeera: ‘The suspect’s name is Imran and he lives in the same [area] where Zainab lived.

‘He was arrested before, but was released as we did not have evidence. After that he shaved his beard off so that no one could recognise him.’

The official said that the suspect has confessed. 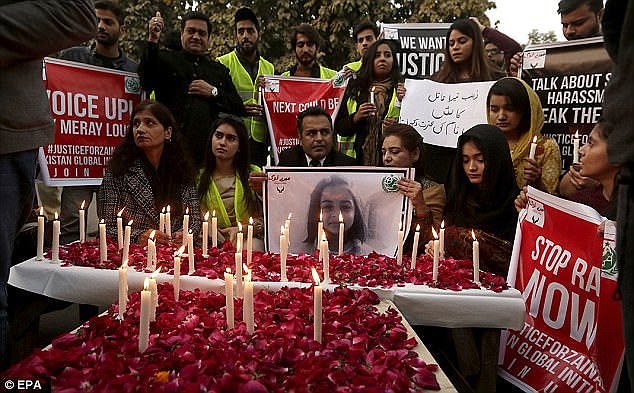 The horror of Zainab’s killing was brought home for Pakistanis by a photo of her that was widely shared on social media, showing the smiling girl in her favorite bright pink coat, with a pink barrette holding back her hair. Pictured: A vigil for Zainab 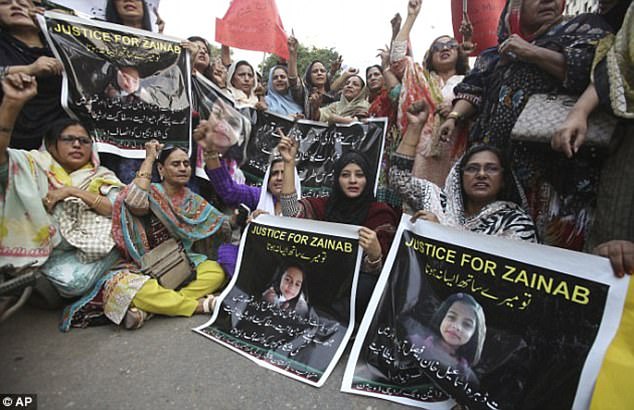 There were 4,139 cases of child sexual abuse reported in Pakistan in 2016, according to Sahil, an organization documenting child abuse in the country 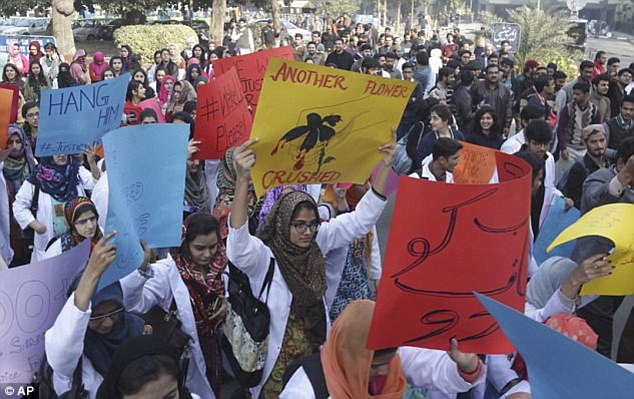 The city of Kasur is surrounded by brick kilns and tanneries and has hundreds of small factories making shoes and embroideries, all of which employ children – making them vulnerable to abuse

The horror of Zainab’s killing was brought home for Pakistanis by a photo of her that was widely shared on social media, showing the smiling girl in her favorite bright pink coat, with a pink barrette holding back her hair.

TV channels aired the photo alongside pictures of her lifeless body abandoned on a heap of garbage in her home city of Kasur.

There were 4,139 cases of child sexual abuse reported in Pakistan in 2016, according to Sahil, an organization documenting child abuse in the country.

Across Pakistan, thousands protested, condemning police inaction and blaming the government for failing to protect children.

Kasur is a congested district of around 2.5 million people in eastern Pakistan, near the border with India.

The city of Kasur is surrounded by brick kilns and tanneries and has hundreds of small factories making shoes and embroideries, all of which employ children – making them vulnerable to abuse.

In 2015, an extensive child pornography ring was uncovered in the city; it had been flourishing for nearly a decade and involved nearly 250 children, some of whom were forced at gunpoint to have sex.