Progress: A major trial to compare the X-Bolt (pictured) with the traditional screw is under way in ten centres around the country

As soon as Gloria Hague fell in the shower last year, she knew she’d done herself some serious damage.

The 62-year-old was taken to hospital, where X-rays confirmed the worst, that she’d fractured her left hip.

Hip fractures affect 75,000 people a year in the UK. However, they are notoriously difficult to treat because they tend to occur in elderly, frail patients, many of whom have other conditions such as osteoporosis — where bones lose strength, making them more difficult to repair.

Currently, one in 20 operations to repair hip fracture fails: the 30-day death rate after a hip fracture repair operation is 6 per cent. But if the procedure fails, the second, much bigger operation has a 50 per cent mortality rate.

‘Hip fractures are an enormous problem, taking up more bed days than stroke and heart attack combined,’ says Xavier Griffin, an associate professor of trauma surgery at the University of Oxford.

‘We try to operate on patients as quickly as possible, within 36 hours, because lying in bed and not being able to walk can have a negative impact on their health.’

It can lead to chest infections and pneumonia (it’s harder for the lungs to expand when you are lying flat, and coughing isn’t as effective, causing mucus to collect in the lungs) and urinary tract infections — ‘and many of these patients already have very little reserve’, adds Professor Griffin.

‘These fractures heal pretty well if you can stabilise them with plates and screws,’ explains Professor Griffin. ‘However, in many patients the bones are softer and more brittle due to osteoporosis.

‘This means instead of screwing into hard wood-like bone that holds together, you are working with soft spongy bone that makes anchoring a device difficult. This makes these operations more likely to fail.’

There are around three million people with osteoporosis and now there is a new option if they fracture their hip; using a device called the X-Bolt. 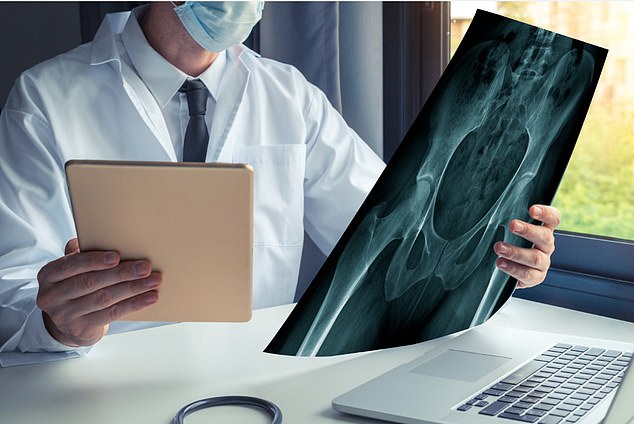 Did you know? Hip fractures affect 75,000 people a year in the UK, but they’re difficult to treat

It consists of ‘wings’ that expand in the ball part of the thigh bone, compressing surrounding bone to fit in snugly and give greater anchorage.

Professor Griffin explains: ‘The idea of the new device is to get better grip in the bone.The screw that goes into the top of the thigh bone to hold the fracture together contains a flattened, winged bolt.

‘Once in place, the wings of the bolt are released by turning a screw thread they are attached to and they expand to give greater stability in the bone. It’s the same principle as expandable wall plugs.’

The idea is that more stability also allows greater strength and rotation in the joint and leads to a fuller recovery. The device was invented by orthopaedic surgeon Brian Thornes. He claims the X-Bolt, first used in England in 2012, could revolutionise treatment for these patients and reduce revision surgery.

‘This device has the potential to transform fixation in patients with osteoporosis and hip fractures, providing a significant improvement in mobility and quality of life,’ he says.

Early results look promising. A 100-patient pilot study at the University of Warwick, published in 2016 in The Bone & Joint Journal, showed a zero re-operation rate with the X-Bolt, compared to 6 per cent for the traditional procedure.

Now a major trial to compare the X-Bolt with the traditional screw is under way in ten centres around the country.

In total, 1,140 patients will receive either a gold standard sliding hip screw — used by the NHS — or the X-Bolt. 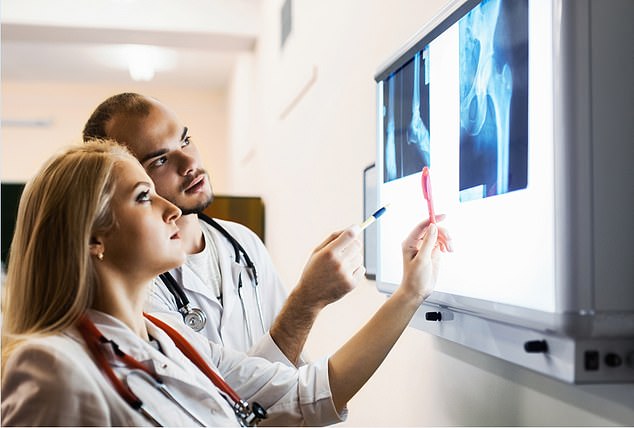 Looking good: A 100-patient pilot study at the University of Warwick, published in 2016 in The Bone & Joint Journal, showed a zero re-operation rate with the X-Bolt, compared to 6 per cent for the traditional procedure

The X-Bolt operation, carried out under general or spinal anaesthetic, takes 45 minutes and is done in the same way as a sliding hip screw procedure.

Patients are in hospital for around 11 days and need painkillers for two to three weeks.

So far 1,000 patients have been followed up a year after their surgery. Results of the study, funded by maker X-Bolt Orthopaedics and the Oxford Biomedical Research Centre, will be published in June.

Gloria, from North Shields, Tyne and Wear, was asked if she would like to take part. Trial patients are randomly given either device; Gloria believes she received the X-Bolt.

‘They showed me a picture of the device and explained it might make the joint more secure, ’ says Gloria, who was born with spinal muscular atrophy — a muscle-wasting condition that makes her bones more fragile.

Almost a year on from her operation, Gloria still experiences problems, although she is hopeful for improvement. ‘My hip is still painful and I stay at home a lot more,’ she says. ‘But I am grateful to have had the surgery; when I fell, I thought I was a goner.’

Merris Walton, 74, from Oxford, who was also enrolled on the trial after she fell and broke her right hip, had a similar experience. She doesn’t know which device she was given.

‘Because I have osteoporosis, my bones don’t just break, they shatter,’ says Merris, a retired hairdresser and hospital clerk, who has five children. ‘Before the fall, I was able to get around fine but now I’m using one crutch when I go out.’

According to Professor Griffin, who’s leading the trial, this is not uncommon.

‘Hip fractures generally occur in older people because their bones have weakened with osteoporosis,’ he says.

‘Few patients recover to where they were before the fall. Most have a step down in their mobility. If the trial shows the X-Bolt is effective, we will try to get guidance on its use from NICE so more patients can benefit.’

The X-Bolt is being offered as part of the trial at hospitals in Oxford, Northumbria, Leicester, Newcastle, South Tees, Surrey, Slough, Coventry, Bristol and Portsmouth.

Adrian Wilson, an orthopaedic surgeon at The Wellington Hospital in London, says: ‘Any innovation that can improve the success rate of hip fracture repair surgery is a good thing.’