On the dot of 9.30am, there is a knock on my office door — and in troop the senior management team.

There’s the food and beverage supremo, the head of housekeeping, the financial controller, the maintenance man, the boss of ‘guest relations’, the hotel operations manager, the director of human resources, the receptionist, the duty manager.

Oh, and my personal assistant, whose pen is poised, ready to record any pronouncements I might make.

I’ve already caught up with the duty manager, Samantha Rieu, who told me that 59 out of 90 rooms were occupied last night – nearly a 66 per cent occupancy – at an average rate of £323.65 per room. I was informed that one room is out of order, 11 are undergoing repairs and we still have 19 to sell for this evening.

‘Let’s make our guests feel extra-special when they walk through the door,’ I proffer. Not exactly a Churchillian rallying cry, but some of the staff nod politely. I say ‘our’ guests because – for 24 hours only – I am the general manager of Dukes London, a venerable five-star hotel off St James’s Street, within a bread roll’s throw of Clarence House.

The real GM is Debrah Dhugga, one of only a handful of female hotel bosses. She is letting me assume her role for the day (while hovering in the background in case I make a decision that sends the place into freefall) because, first, I have always wanted to know what goes on behind the scenes; second, it’s a chance to practise some of the things I regard as important in hospitality; and finally, because I love throwing a party.

(On the party front, I soon realise that a GM’s job entails rather more than making sure the guests’ glasses are charged.) But back to my morning meeting. One of the most important contributions comes from guest relations manager Lucica Rosu, who runs down the list of ‘SAGs’ checking in over the next couple of days. ‘SAGs?’ 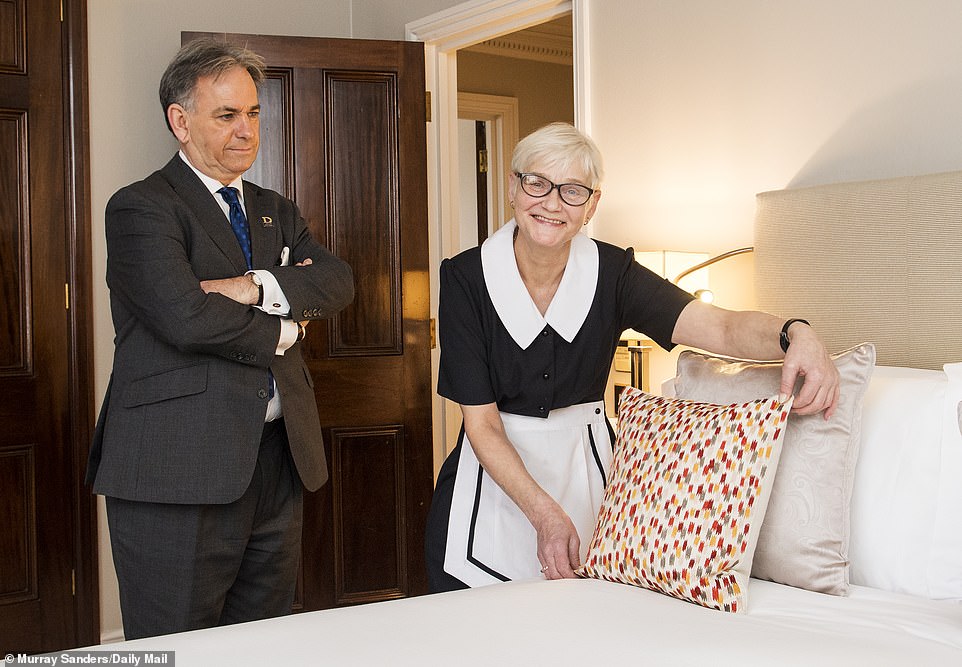 ‘We don’t talk about ‘VIPs’ here because everyone who stays is a VIP,’ interjects Mrs Dhugga. And it is very much Mrs Dhugga, not Debrah. Just as I am Mr Palmer, never Mark.

As it happens, we have quite a few SAGs arriving – all of whom will be receiving a welcome card signed by Mrs Dhugga. And that’s not the half of it. A New York businessman has booked The Duke of Clarence Suite, which starts at £2,500 a night. He is well-known to Dukes and has what Lucica calls ‘strong requests’.

All alcohol is to be removed from his minibar and replaced with prune juice, V8 and Mars Bars and on the table there must be a glass bowl with kiwi and dragon fruit in it, plus a stash of pomegranate. He wants a bowl of jelly babies, barbecue-flavoured crisps and, because he is partial to cigars, an ashtray must be placed on the balcony.

Any deviation and Mr New York won’t be happy. Worse, he might be tempted next time to book at The Stafford hotel, practically next door. Competition, I discover, is ferocious, and repeat business is the financial lifeblood of a successful operation.

Another SAG will be staying in a junior suite on the north side of the building. He’s from Luxembourg (no, it’s not Jean-Claude Juncker, though he sounds as tricky). I just hope he’s paying top- dollar, because he wants the TVs in the living room and bedroom to be removed, the minibar must contain only sparkling water, the coffee machine should be out of sight and absolutely no magazines or leaflets are to be on display.

‘That sounds strange,’ I note, before duty manager Samantha reminds me that ‘we don’t ask about personal requirements, we just respect what is wanted’.

Later, she tells me how one guest asked for his bath to be filled with Evian water. Another ordered London’s biggest doughnut to be delivered to his room. 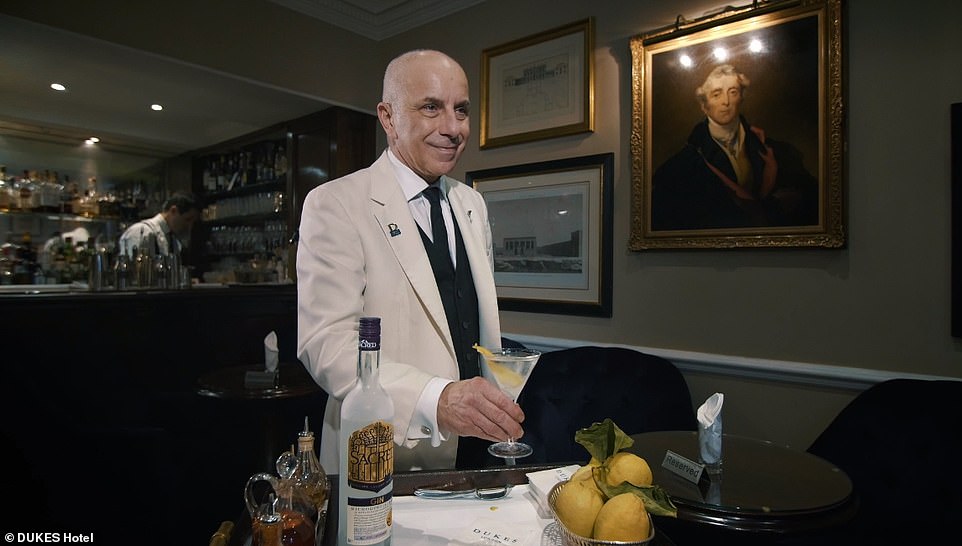 Dukes Hotel sold no fewer than 341 Martini cocktails, at £20 a go, on the night Mark assumed the role as hotel manager

Mrs Dhugga and I walk around the hotel. I notice that the carpet near the lift on the second floor is fraying and the paintwork in one of the corridors is scuffed. I report it to Samantha and, within minutes, maintenance is on the case.

Running a good hotel is a military operation. What I like is that there is little time for tantrums. I dare say they happen – but not on my watch. Every day is a performance: the show must go on.

Two Spanish women are checking out. Adjusting my badge, I am tempted to ask if they have enjoyed their stay – a question I hate, as it never invites an honest answer.

Instead I ask: ‘Is there anything you think we could do better?’ They tell me there is too much noise at night, mainly doors opening and shutting. I report this back to Lucica and a note is made on the ladies’ profiles. Next time, they will be given a super-quiet room and raised to SAG status.

I pop down to the restaurant, GBR (Great British Restaurant), where Norfolk-born head chef Nigel Mendham is about to start the lunch service, and Maria, in charge of the bar, is putting the finishing touches to her Bloody Mary trolley – a new initiative that is already proving popular at weekends.

I confess to a passion for Negronis and ask Maria why Dukes has such a limited supply of vermouths. I tell her I shall shortly be taking this up with the financial controller. Which I promptly do. My meeting is as cordial as meetings with financial controllers can be. I’m the Prime Minister, but he’s the Chancellor. I bring up the vermouth issue, but it’s clearly not a priority. ‘We have to be careful not to be left with stock we can’t sell,’ he says.

I ask about the carpet leading to the spa. In my view, it could do with changing. ‘We have that in hand,’ he says. 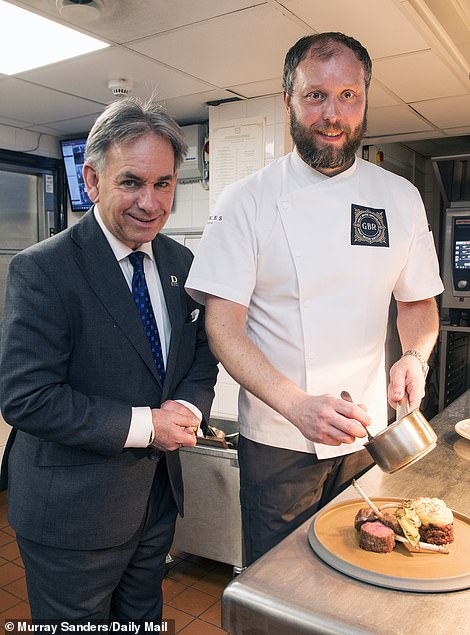 More pressing is a decision about changing the wi-fi provider — three companies have quoted, ranging from just over £100,000 to nearly £180,000. We’ll need to sell a lot of Negronis to make that back.

Suddenly, it’s time for the ‘five minutes before 5pm meeting’, when all the department heads assemble again. Everything seems ready for the busiest time of the day, and I sense the atmosphere building, not least because Dukes’ famous Martini bar (apparently the inspiration behind James Bond’s ‘shaken, not stirred’ line) is about to open.

Guests are checking in. But it’s a few hours before the indefatigable Mrs Dhugga and I can check out. At 8pm, I look in on the bar, where, by the end of the night, we will have sold no fewer than 341 Martini cocktails, at £20 a go.

I’m always impressed when a GM lends a hand, so I ask barman Maurizio how I can help. ‘You could take a Cosmopolitan to Table 14,’ he says. So off I go, tray in hand, heart in mouth. Mustn’t drop it. Don’t talk too much . . . job done.

As it happens, when I eventually get home, I pour myself my own humongous cocktail, then flop. GMs have a reputation for being smoothie-chops, but now I have a sneaking admiration for them.