Many psychiatrists have been aware that low serotonin levels may not cause depression for years, a chair of psychology has said.

Dr Jonathan Raskin, who is a psychotherapist at State University of New York, told DailyMail.com that he had been concerned the theory was ‘incomplete’ for ‘a while’.

But he said many medics continued to prescribe the medication because it was ‘easier’ than offering more time-intensive care.

The pills could still be helpful for some patients, he said, but that he hoped warnings over their effectiveness would encourage more people to take control of their care.

This week a landmark UK study called into question society’s ever-growing reliance on antidepressants like Prozac.

The $15billion-a-year industry — set to grow to $21billion in the next decade — sees patients prescribed pills like Prozac on the promise they will cure people’s depression by raising levels of serotonin, a neurotransmitter in the brain.

But after reviewing 17 major studies scientists at University College London said they found no convincing evidence that a lack of this chemical sparked the condition.

Researchers from University College London said a review of evidence has found no link between low serotonin levels and depression casting doubt on antidepressants designed to boost levels of the ‘feel good’ chemical. But other experts have cast doubt of the findings 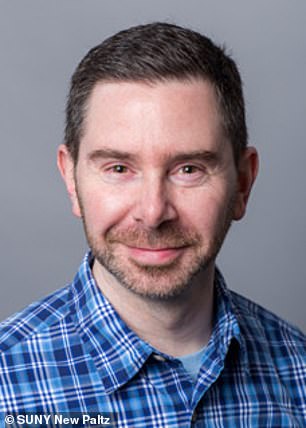 Dr Jonathan Raskin, chair of psychology at State University of New York at New Paltz, said many experts had been concerned the theory was ‘incomplete’

But the rates are much higher among women, where as many as 18 percent are taking the pills to treat conditions.

Asked about the study, Raskin said: ‘I think most mental health professionals familiar with the research have known for a while that the serotonin theory of depression is incomplete and has mixed research support.

‘Depression is a complicated issue, and the idea we would be able to reduce it simply to serotonin is not right.’

He added: ‘Anti-depressants have some effect some of the time but I don’t think they are a cure-all.

‘They are easier to prescribe and give to people than providing more time intensive things like psychotherapy.’

One academic involved in the UK study described the findings as ‘eye-opening’, and that ‘everything I thought I knew has been flipped upside down’.

Lead author Professor Joanna Moncrieff, a psychiatrist, said: ‘The popularity of the “chemical imbalance” theory has coincided with a huge increase in the use of antidepressants.

‘Thousands suffer from side effects of antidepressants, including severe withdrawal effects that can occur when people try to stop them, yet prescription rates continue to rise.

Serotonin helps carry signals in the brain and is thought to have a positive influence on mood, emotion and sleep.

They are preferred to other types of antidepressants because they cause fewer side effects. Yet they can still lead patients taking them to experience anxiety, diarrhoea, dizziness and blurred vision.

Depressed patients can also be hit by crippling withdrawal symptoms when they try to come off the pills.

At the same time, a raft of studies have suggested they don’t work any better than a placebo.

The UCL study, published in the journal Molecular Psychiatry, analysed 17 previous reviews dating back to 2010 and consisting of dozens of individual trials.

It does not prove SSRIs don’t work. However, it does suggest the drugs don’t treat depression by fixing abnormally low serotonin levels.

SSRIs have no other proven way of working, Professor Moncrieff and colleagues said.

She added: ‘We can safely say that after a vast amount of research conducted over several decades, there is no convincing evidence depression is caused by serotonin abnormalities, particularly by lower levels or reduced activity of serotonin.

‘We do not understand what antidepressants are doing to the brain exactly.

‘Giving people this sort of misinformation prevents them from making an informed decision about whether to take antidepressants or not.’

Studies used in the review involved hundreds of thousands of people from various countries.

They found there was no difference in serotonin levels between people diagnosed with depression and healthy people, despite polls suggesting up to 95 per cent of the public believing this is the case.

Artificially lowering serotonin levels in healthy volunteers also did not lead them to developing depression.