Archaeologists have discovered evidence of a massive medieval tannery at Fountains Abbey, one of the largest ruined Cistercian monasteries in England.

The researchers, from the National Trust and the University of Bradford, used ground penetrating radar to identify the remains of the tannery – where hides of animals are treated to produce leather – at the 12th century abbey near Ripon in North Yorkshire.

They found evidence of an ‘industrial scale’ tanning operation that would have required hundreds of people, which would have contrasted with the peaceful religious activity close-by.

Tanning was a vital part of the abbey economy where animal hides would be de-haired and cured to make leather for uses such as clothing, belts, bedding, book bindings and parchment for reproducing religious texts by the monastic scribes.

But tanning was a rather disgusting operation; hides were usually shipped to the tannery covered in dirt and blood, already stiff and rotting before being soaked in human urine to remove hairs.

The find is of particular significance because of its size – the researchers said it indicated an industrial scale operation requiring hundreds of people. The two buildings dedicated to tanning operations at Fountains Abbey are marked in red. The one on the left may have extended across the nearby River Skell

WHAT IS A TANNERY?

A tannery is where hides of animals are treated to produce leather.

Water dissolves chemicals, enzymes and dyes in the processing of hides

It combines a substance called tannin with the hide fibres, allowing the resulting leather to be dried, yet remain flexible.

The process has been used to craft footwear, clothing, belts, containers, weapons, transportation devices, and even armour.

So the fact tanning operations were situated so close to the rest of the abbey community has surprised archaeologists.

‘A tannery of this size, spanning such a large area of the site, reveals an operation on an industrial scale, meeting the needs for leather and other processed animal skins for the community of hundreds of people in the growing monastic community,’ said Mark Newman, National Trust archaeologist.

‘Its scale also reflects an aspect of the productivity of the huge herds the abbey acquired and managed.

‘Also, given the noise, activity and stench that emanated from a tannery, we previously thought that it would have been sited further away from the monks and their worship.

‘We see now that the tannery was much closer and a far cry from the idea of a quiet, tranquil abbey community.’

Fountains Abbey was built in 1132, but the researchers think the tannery was operational from the late 1150s until the 1530s.

Today, Fountains Abbey is ‘an oasis of tranquillity’, Newman said, but in the 12th and 13th centuries, it was ‘as busy and industrialised a piece of landscape’ as anywhere else in Britain.

Experts had always been puzzled by a ‘bowling alley-shaped’ strip of land on the east side of the Fountains Abbey precinct, close to the River Skell.

With help from Geoscan Research and Magnitude Surveys, the experts used ground penetrating radar, which uses radar pulses to image the subsurface, backed up with other geophysical survey methods.

This ‘bowling alley-shaped’ strip was the location of two substantial stone buildings, each around 50 feet (16 metres) wide, with lined pits, tanks and other structures around them. 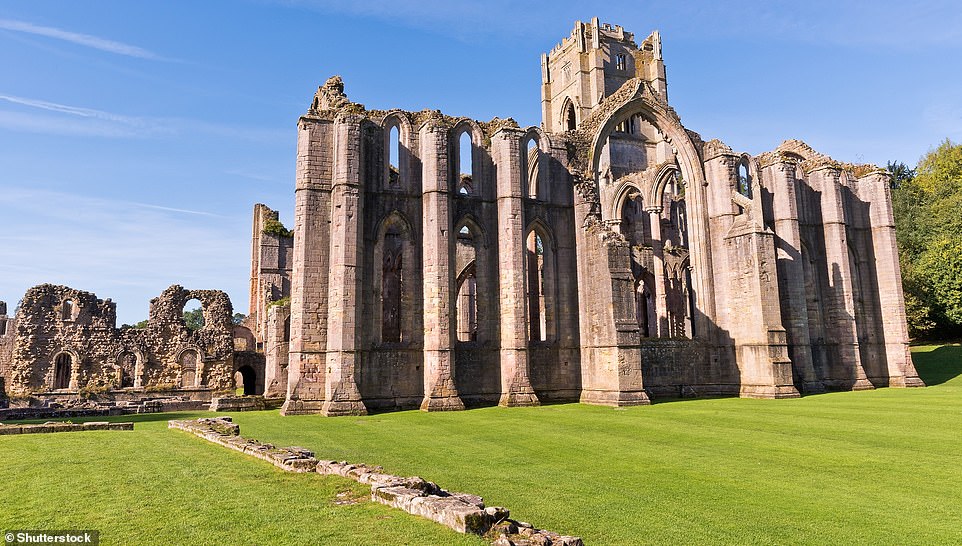 Fountains Abbey (pictured) is one of the largest ruined Cistercian monasteries in England. Two structures used for tanning operations originally sat just right of the entrance pictured here, in a ‘bowling-alley-shaped’ strip of land

One of the stone buildings was at least 104 feet (32 metres) long. In both buildings, two aisles of columns suggest they would have been more than a single story in height.

The larger building likely extended over the river itself on stone arches, just like some of the other later twelfth century buildings on the site.

The larger building also had a large porch facing westwards back towards the abbey church just north of the present river bank. 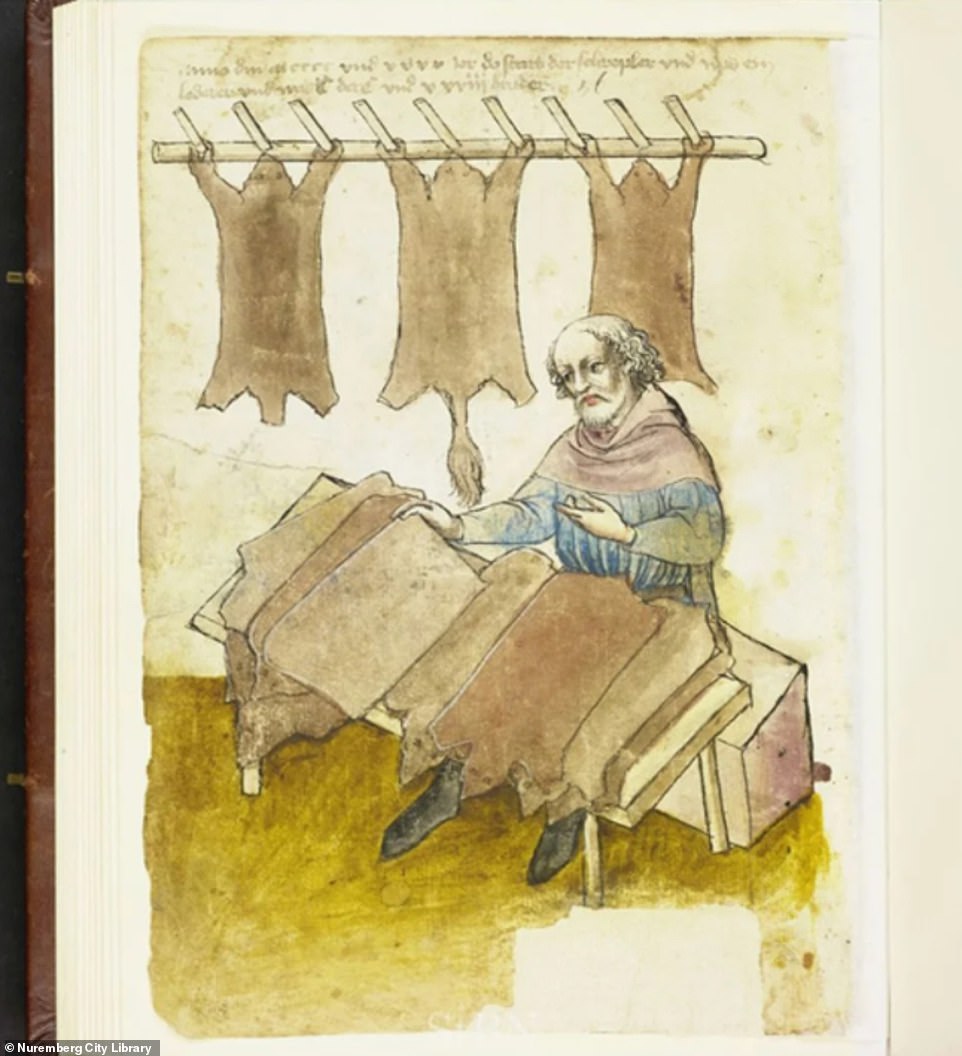 Man occupied in the leather producing industry, shown sorting skins after drying. Tanning was usually the work of lay brothers – men who fulfilled a role focused upon manual service and other secular matters

Animal hides were shipped to the tannery covered in dirt and blood, already stiff and rotting.

The tanner would have to soak the hides in water to clean them and restore malleability.

Then they had to scrub away any remaining fat or tissue from the underside of the hide.

Next, they would soak the hide again, in human urine to remove hairs.

When the hairs were loose enough, they scraped the hide with a knife to produce a smooth surface.

The tanner then had to soften the hide into a workable material.

To accomplish this, they pounded animal faeces into the hide or soaked it in diluted animal brains.

The bacteria growing in the faeces or brains fermented the hides, allowing them to last longer.

Finally, the tanner would soak the material in a tanning solution of ground up bark to give it colour.

‘There are also traces of other enclosures and perhaps a third building along with a series of what appear to be lined pits.

‘If the identification is correct this would be the largest monastic tannery discovered in the UK and confirms just how important this function was to the Abbey community.’

The remains, along with the proximity to the river for water – a key requirement for the tanning process – has led to the conclusion that this was the tannery serving the Fountains Abbey community.

‘For much of the 20th century, many people believed there was no further archaeological research work to do at Fountains and that pretty much everything to be found had been found,’ said Hilary McGrady, director-general of the National Trust.

‘The team’s work with University of Bradford and our other partners, shows the opposite – there is so much more still to discover there.

‘The discovery of the tannery buildings has provided a missing link and represents some key named buildings the team wanted to identify on the site.’

According to the National Trust, the findings reveal ‘remarkable new evidence’ about Fountains Abbey’s community of monks and ‘lay brothers’ – men who fulfilled a role focused upon manual service and other secular matters.

Lay brothers were not literate like monks and were often recruited to bring crucial craft skills to the monastery, relieving the monks from most physical jobs so they could dedicate more time to study and worship.

‘While monks had woollen habits and cloth blankets to sleep under, lay brothers were provided with weatherproof animal skin capes for outdoor work and slept under sheepskins,’ said Newman.

‘Fountains recruited hundreds of lay brothers in its early decades all of whom needed to be equipped this way and this tannery provided the means for that.’

However, lay brothers were ‘separate but equal’, according to St Bernard, creator of the Cistercian Order, and were not intended to be inferior to the monks. In fact, monks and lay brothers were buried together as equals.

The lay brothers and the tannery were also central to the whole monastic mission in that one of Fountains’ purposes was to ‘grow’ communities of monks capable of leaving the Mother house to form new monasteries – across the North and even into Norway. 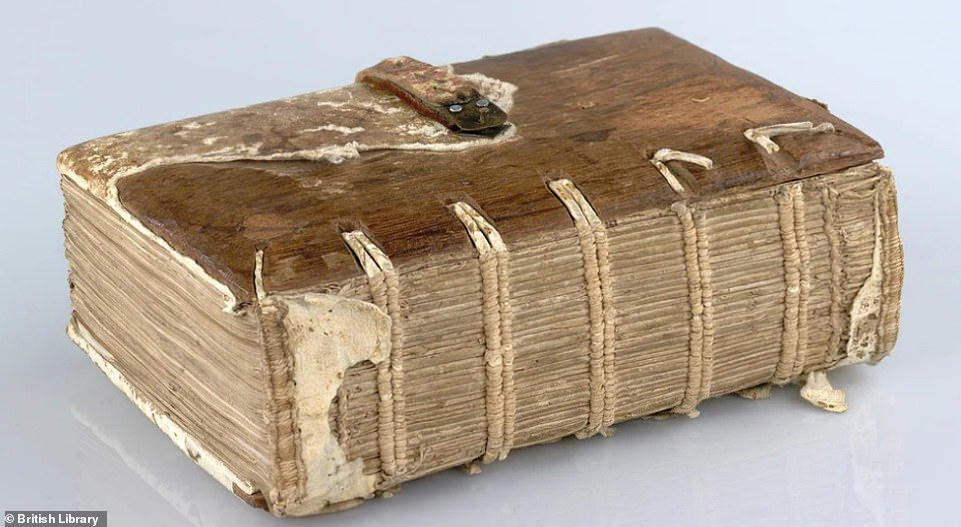 Animal hides would be de-haired and cured to make leather for uses such as clothing, belts, bedding, book bindings and vellum or parchment for reproducing religious texts. Pictured, a leather bound volume from Fountains Abbey

The sites of new houses would be prepared by teams of lay brothers, and the new community would be furnished with sets of religious texts, copied by the monks at Fountains Abbey on vellum – dried goat or calf skin – and parchment prepared from animal skins.

The project team believe that the newly discovered building may have been where the vellum and parchment was produced, both at their inception and perhaps in the early years of the lives of the new monasteries as they grew.

In later years, the numbers of lay brothers at Fountains Abbey reduced due to social changes including better economic and other opportunities outside the abbey community.

But the tannery remained in operation right until the last days before the Dissolution of the Monasteries in October 1539.

Today, Fountains Abbey is a World Heritage Site and visitors can walk among its stunning ruins.

The Act of Supremacy and the Dissolution of the Monasteries

The Act of Supremacy

The Act of Supremacy, established in 1534, was an important English act of Parliament that recognised Henry VIII as the ‘Supreme Head of the Church of England.’

Prior to 1534, the supreme head of the English Church was the Pope of the Roman Catholic Church.

Henry VIII introduced the Act primarily because he needed a male heir to the throne and had been unable to produce an heir with his wife, Catherine of Aragon. He had not tried for years to obtain an annulment of his marriage but The Pope had refused.

According to the church at the time, a validly contracted marriage is indivisible until death.

With the Act enforced, it declared the king ‘the only supreme head on Earth of the Church of England’ and that he would therefore enjoy ‘all honours, dignities, preeminences, jurisdictions, privileges, authorities, immunities, profits, and commodities to the said dignity.’

The act also required an oath of loyalty from English subjects that recognized his marriage to Anne Boleyn.

Significantly, the Act marked the beginning of the English Reformation and was repealed in 1554.

The Dissolution of the Monasteries

Shortly after, Henry dissolved and disbanded monasteries throughout England, Wales and Ireland.

By the 1530s, at a time of increasing tensions between the Pope in Rome and King Henry VIII, monasteries were seen as corrupt and out of touch with the common people of England and Wales.

After detaching England, Wales and Ireland from the authority of the Roman Catholic Church, Henry’s next step was to disband the monasteries.

He did this partly to reform the church but also to strip the monasteries of their huge wealth.

A set of administrative and legal processes between 1536 and 1541 saw the king appropriate their income, dispose of their assets, and provide for their former personnel and functions.