Experts say it would be ‘foolish’ to expand eurozone

Jean-Claude Juncker’s plans to expand the eurozone came under fresh attack last night as critics warned that the single currency has been ‘disastrous’ for the region.

In his annual State of the Union speech last week, the European Commission president said those members of the EU that have not adopted the euro should do so.

Setting out his plans for a European super-state, he said: ‘If we want the euro to unite rather than divide our continent, then it should be more than the currency of a select group of countries. The euro is meant to be the single currency of the European Union as a whole.’

But a survey of 64 leading economists from across Europe yesterday found that 76 per cent were opposed to compulsory membership of the euro for all EU countries.

Jurgen von Hagen, professor of economics at the University of Bonn in Germany, said: ‘The euro has already proven destructive and divisive for the countries currently using it.

‘It would be foolish to repeat the earlier mistakes of making countries adopt the euro which are not ready for it.

‘It would be even more foolish to force countries to adopt the euro which do not wish to do so. This would further weaken the European Union.’

John Hassler, at the Institute for International Economic Studies at Stockholm University in Sweden, said forcing countries to ditch their own currencies and join the eurozone against their will ‘is going to make the union dangerously unstable’.

Michael Wickens at the University of York said: ‘Membership of the euro has proved disastrous for Greece, Ireland, Italy, Portugal and Spain.’

Critics of the euro argue that the one-size-fits-all currency does not work because struggling countries such as Greece and Portugal need lower interest rates and a weaker currency to prosper than richer nations such as Germany.

Greece, Ireland and Portugal each received bailouts from the International Monetary Fund to keep them afloat during the eurozone crisis. 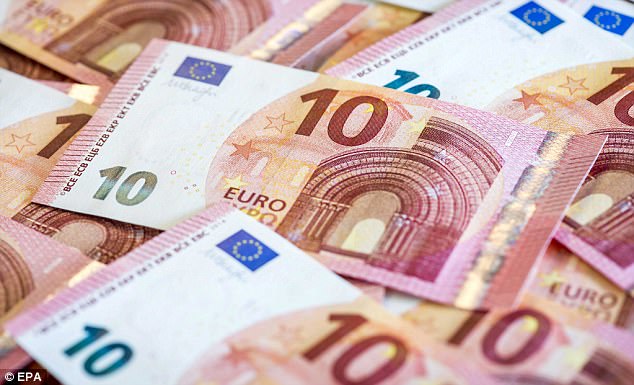 While the UK and Denmark have secured opt outs, meaning they will never have to join the euro, seven EU countries have yet to join the euro – Bulgaria, Croatia, Czech Republic, Hungary, Poland, Romania and Sweden.

‘The European Treaties state that all member states – except for Denmark and the UK, which did not wish to join the euro – should have the possibility to join the eurozone,’ said Mr Juncker.

But responding to the survey by the Centre for Macroeconomics and the Centre for Economic Policy Research, Martin Ellison, at the University of Oxford, said countries should want to adopt the euro – not be forced to.

‘Shouldn’t the benefits of a monetary union be sufficient to ensure that countries like Sweden and Poland join willingly?’ he said.

Simon Wren-Lewis, also at the University of Oxford, said: ‘This is politics driving economics, yet again.’

Nicholas Oulton, at the London School of Economics, said: ‘The euro has been disastrous for Europe so trying to make it compulsory for all member states will only make matters worse.’