Christmas 1974 was one festive season Darwin residents vividly remember – and would rather forget.

December 24 will mark 44 years since Cyclone Tracy wiped out the city, claimed 71 lives and forced the evacuation of most of the population.

Small by world standards, the category-four catastrophe was arguably the most significant tropical cyclone in Australia’s history, according to the Bureau of Meteorology. 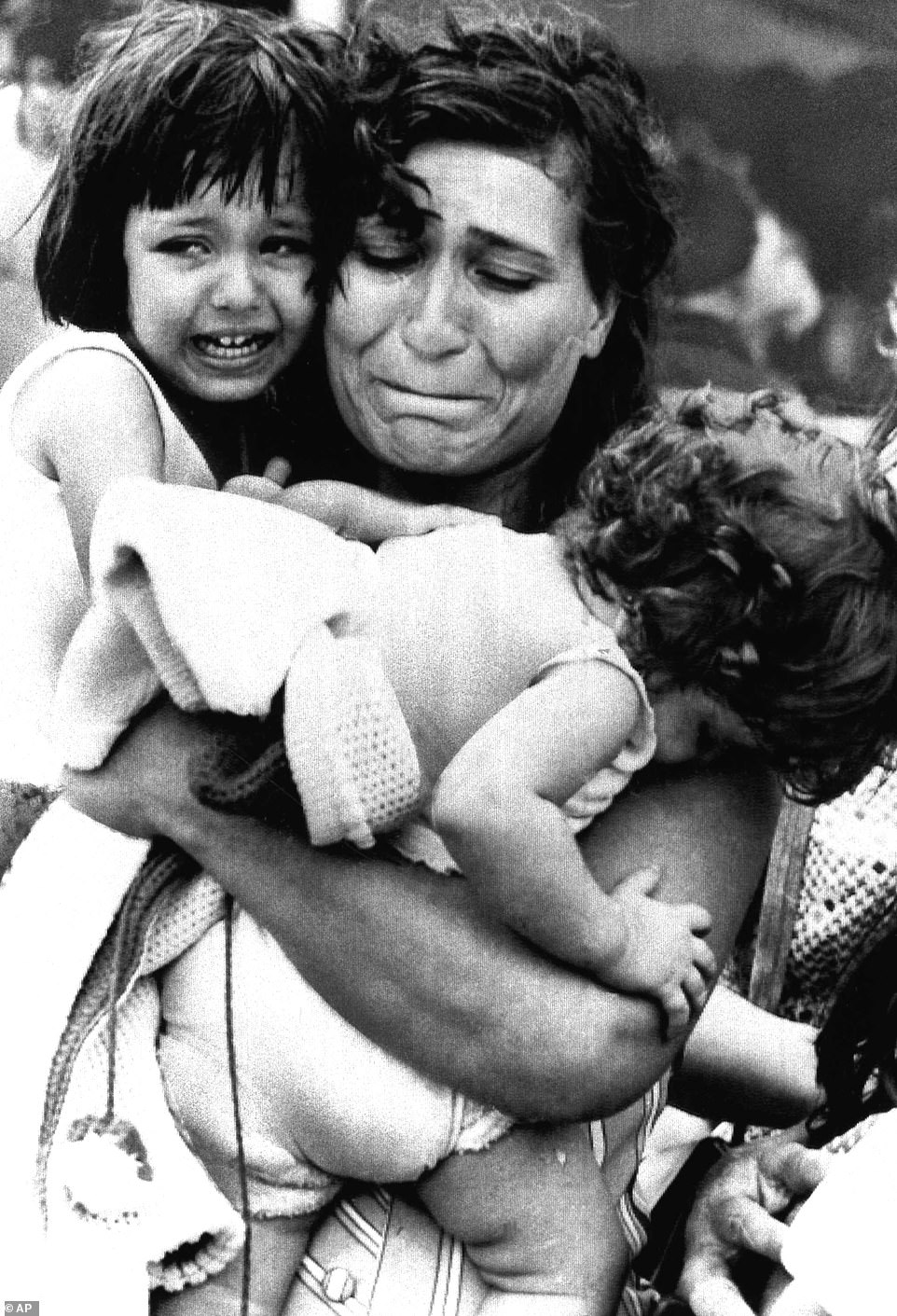 33,000 people were evacuated from the Northern Territory capital, including Mrs M Gatis and her children, Nectaria, 3, and 14-month-old Poppy (pictured)

Dr Lassa went as far as predicting a more severe category five cyclone to hit the city in the future.

‘It’s not a question of whether or not whether it will happen, it will happen. The question is how well the city responds,’ he told Daily Mail Australia.

‘Only time will tell when we’ll get another category four cyclone,’ Dr Surjan said.

Despite previous cyclones causing extensive damage in January 1897 and March 1937, most Darwin residents were unprepared for the havoc that turned their city to rubble in the early hours of Christmas Day, despite warnings in the days leading up to the disaster. 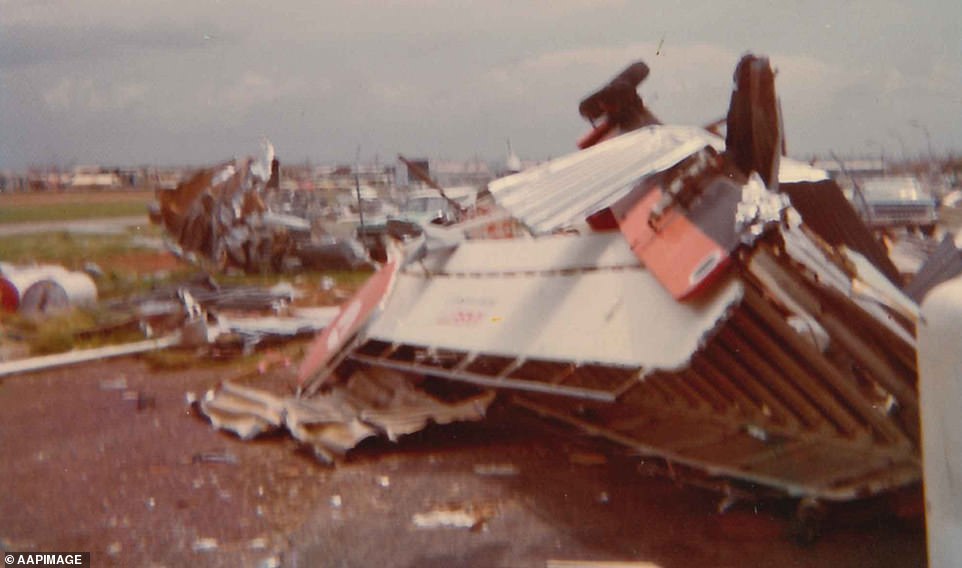 The anemometer at Darwin Airport recorded a gust of 217 km/h before it was destroyed.

The city’s electricity and communications were cut off by flying debris, which meant that the rest of Australia remained unaware of the catastrophe until late in the afternoon on Christmas Day.

Around 49 Darwin residents were killed while another 16 died off the coast.

The death toll was increased to 71 in 2005 after the Coroner declared the six people who still remained listed as missing had ‘perished at sea’. 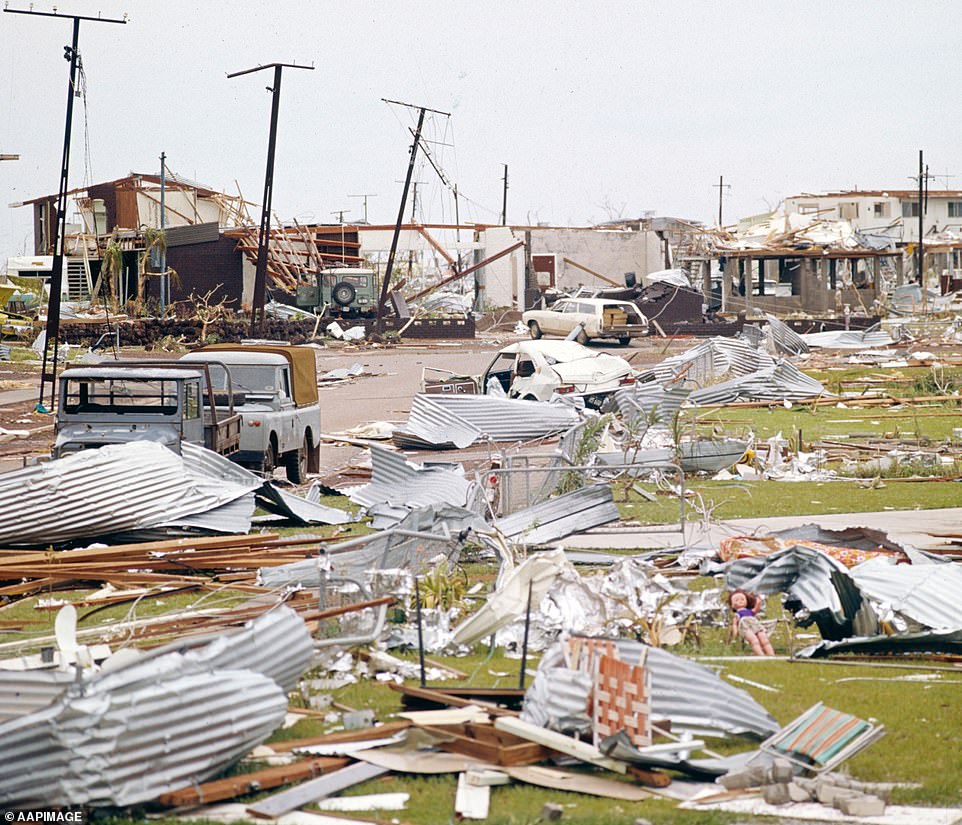 Cyclone Tracy destroyed almost everything in its path, leaving streets littered with roofs that had been blown off homes 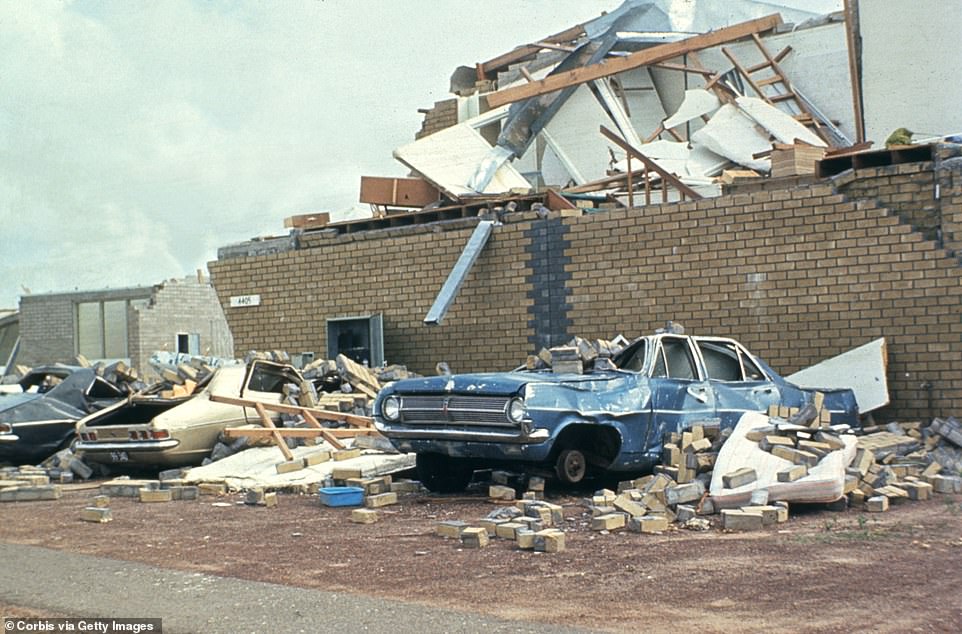 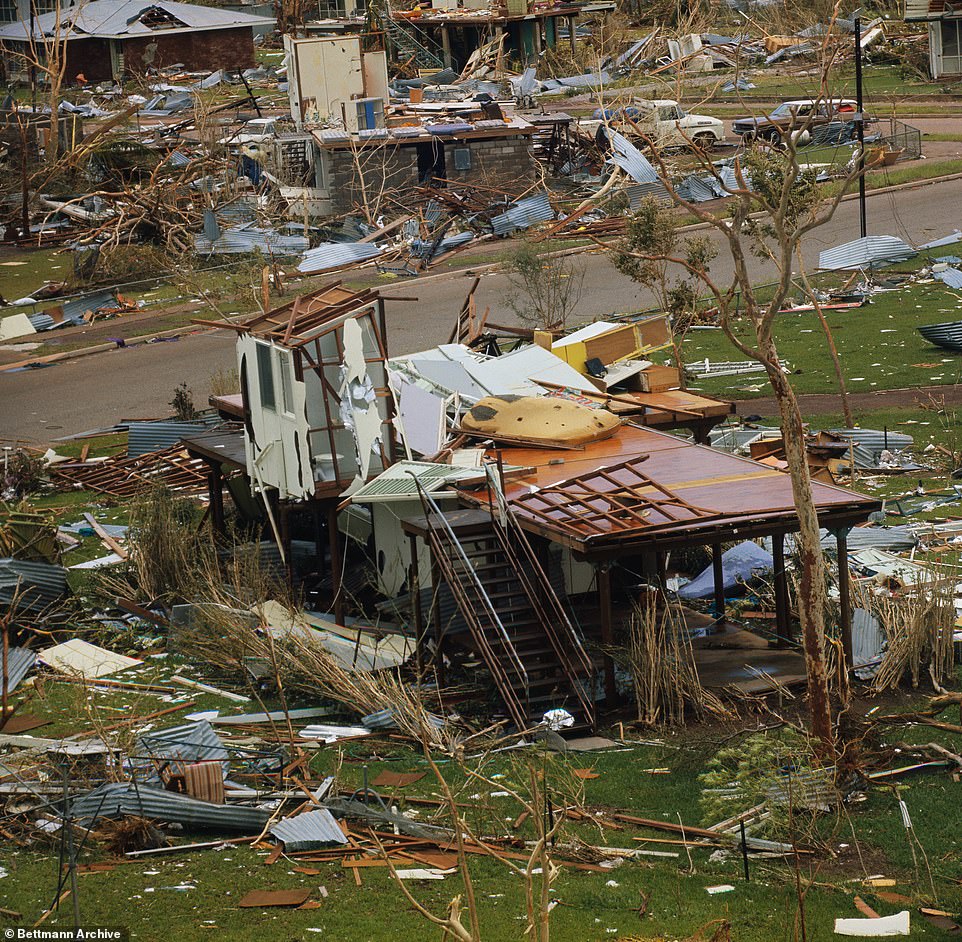 Cyclone Tracy was a costly lesson for Darwin, where all houses are now constructed according to stronger building codes

Very few buildings escaped unscathed as the damage bill ran into hundreds of millions of dollars.

Three-quarters of the population fled within days as the city began the long and expensive process of rebuilding.

Within a week, only 10,638 people remained in Darwin, mostly men who were required to help in the massive clean-up operation.

Most residents were evacuated to Adelaide, Whyalla, Alice Springs, Sydney and Brisbane, and many chose not to return to Darwin when it was rebuilt. 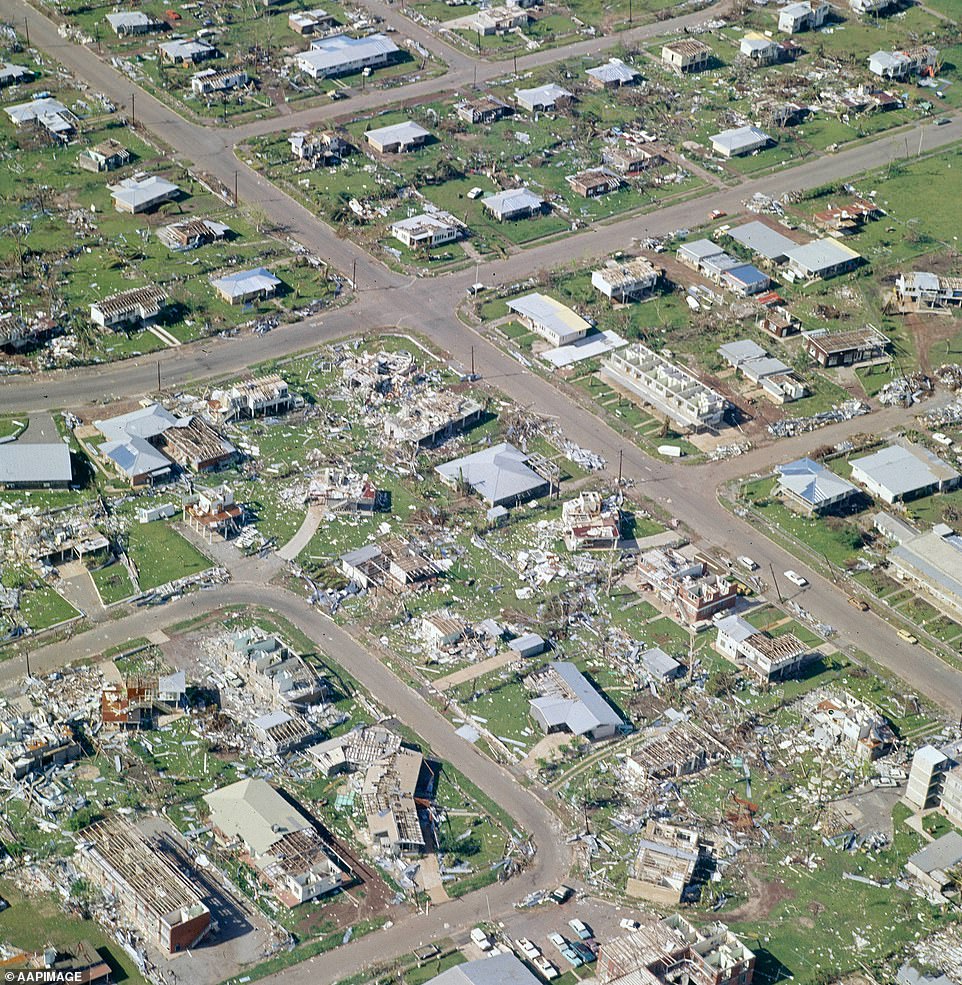 ‘It’s said that Darwin has risen from the ashes a number of times,’ Dr Surjan said.

‘The first was in 1942 when the city was bombed by the Japanese during World War II and then again in 1974 with Cyclone Tracy. There was so much destruction that it took three years to clean up. Two thirds of the city’s residents were evacuated and those who remained worked towards the clean-up.’

A number of costly but important lessons were learned from 1974.

Since the disaster all houses have been required to adhere to stronger building codes and every dwelling in Darwin must have a ‘cyclone shelter’ – a small area surrounded by brick walls.

Dr Lassa said the widespread devastation inflicted on Darwin in 1974 is unlikely to be repeated but could happen again. 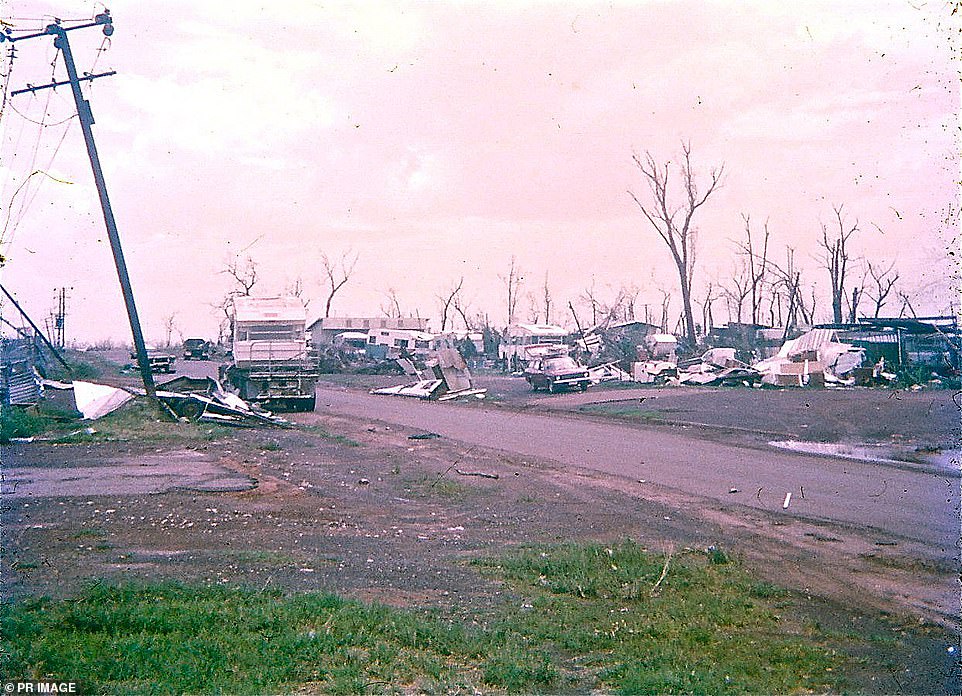 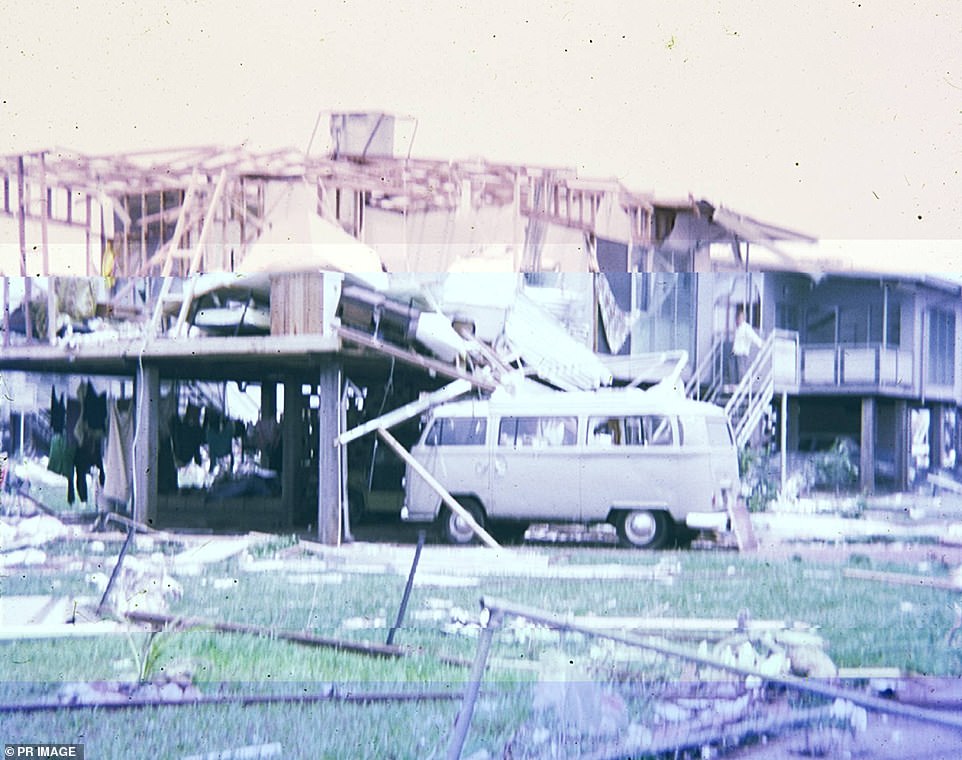 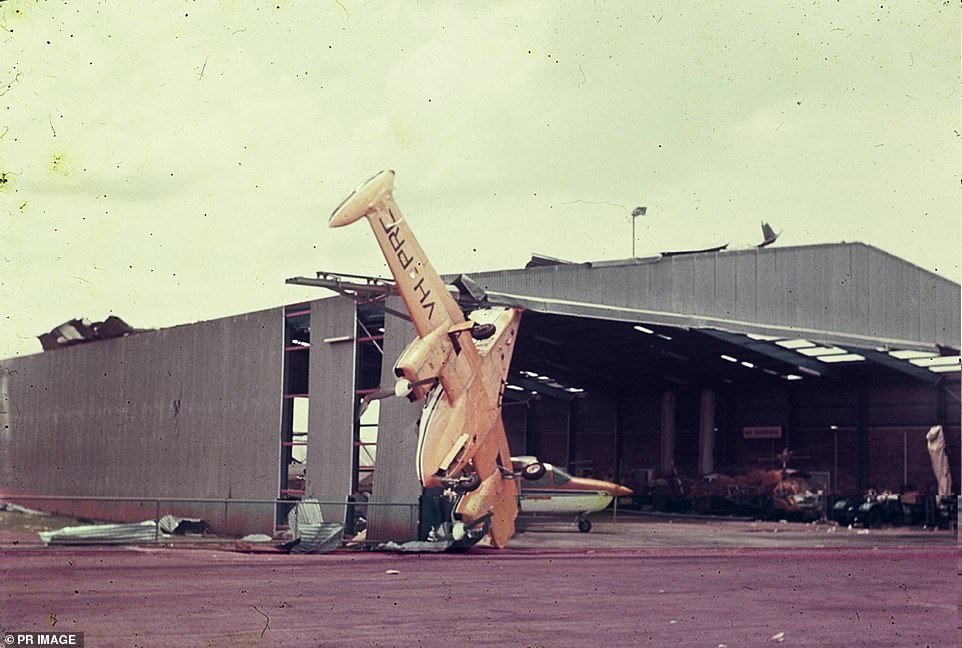 Cyclone Tracy destroyed everything in its path, including planes at Darwin Airport (pictured) which were tossed around like rag dolls by winds of up to 217kmh

Professor Surjan added ‘While Darwin is attracting more investment, we need to be more ambition and ensure that every new building is built for a category five cyclone. It may cost more now but it will save money in the future.’

The pair believe an investment in preparedness is the key to avoiding another natural disaster having such a catastrophic impact.

They are calling on governments to invest in preparedness, prevention and pre-disaster activities. 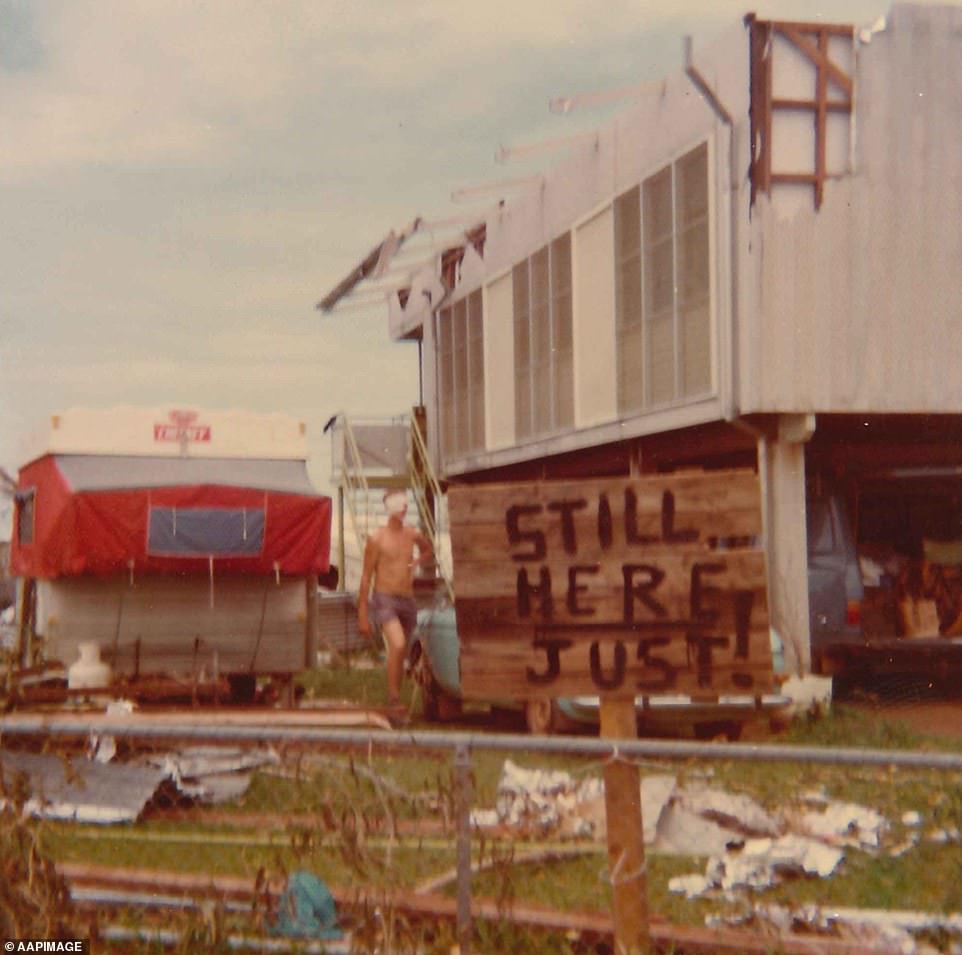 Despite suffering an eye injury, this resident was determined to stay in a caravan beside his house, which was badly damaged. He lost almost everything, but not his sense of humour 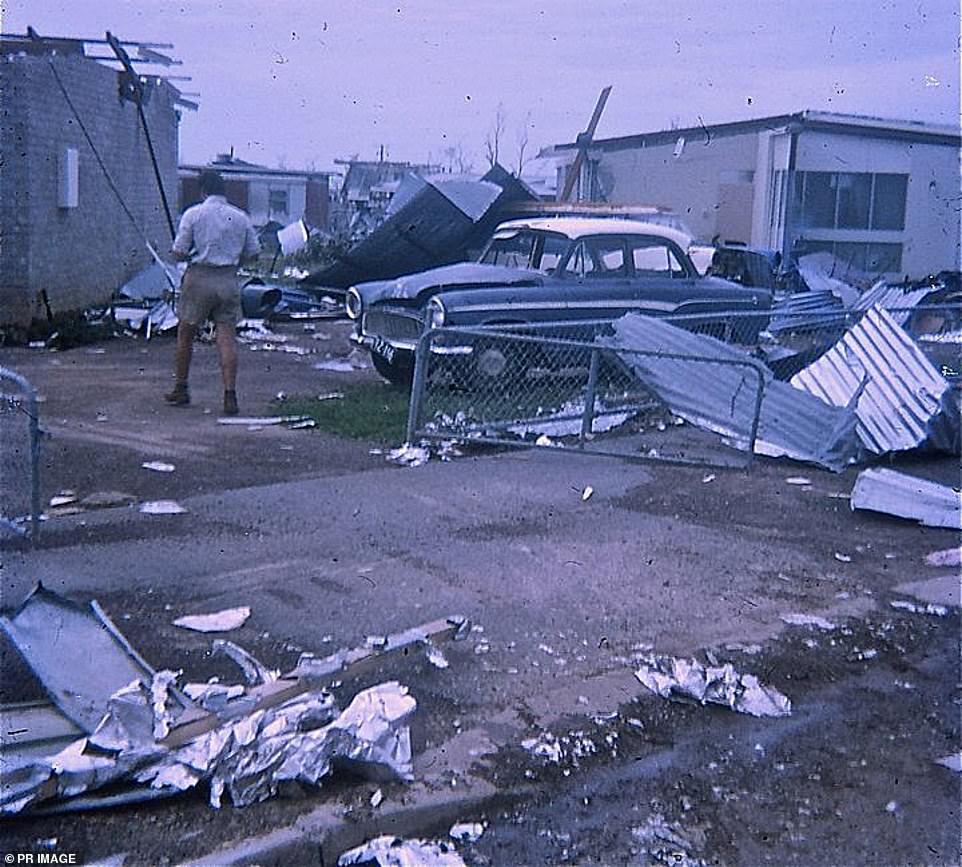 ‘The best way to address disaster scenarios is to create a built habitat that is resilient to the multi-hazard risk factors in any given place,’ Professor Surjan said.

‘Former Secretary General of the United Nations Ban Ki-moon reminded us in 2015 that for every dollar invested in preparedness, seven dollars are saved in response and recovery.’

The experts are also warning against complacency.

Cyclone Marcus was regarded as the worst cyclone to hit Darwin since 1974 when it struck the city in March this year. 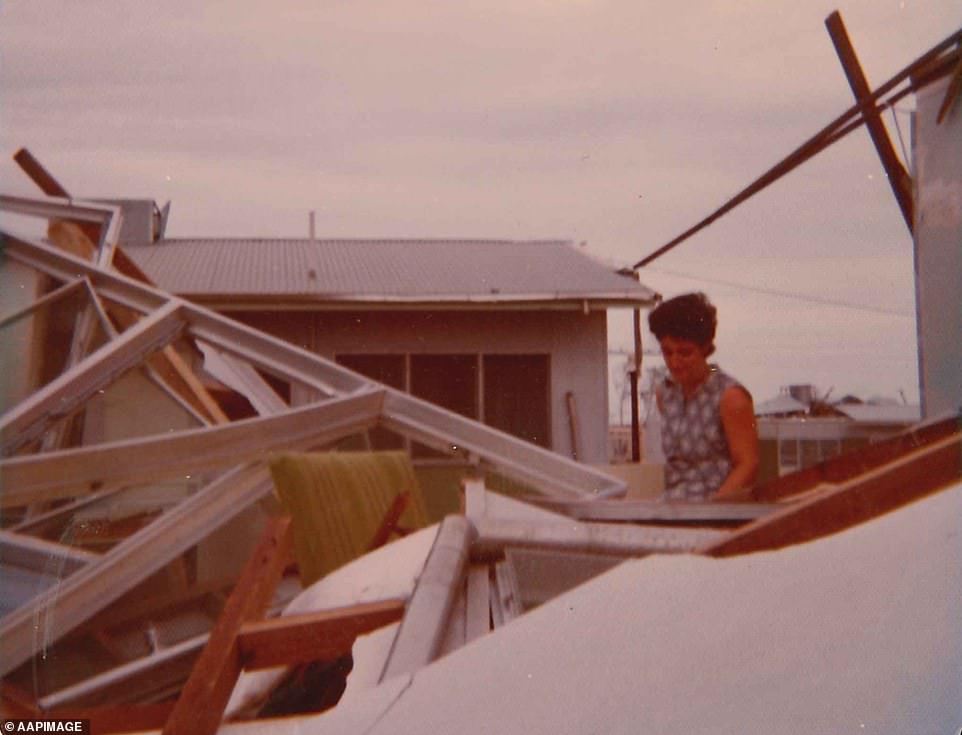 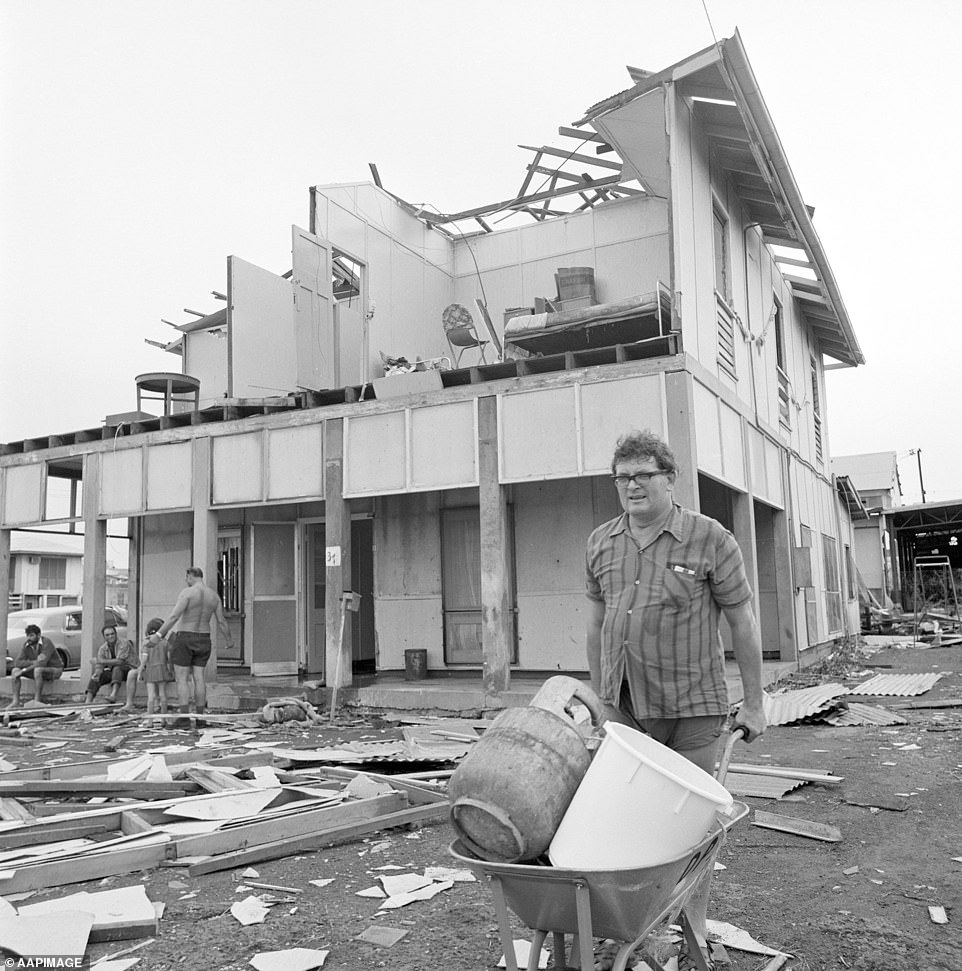 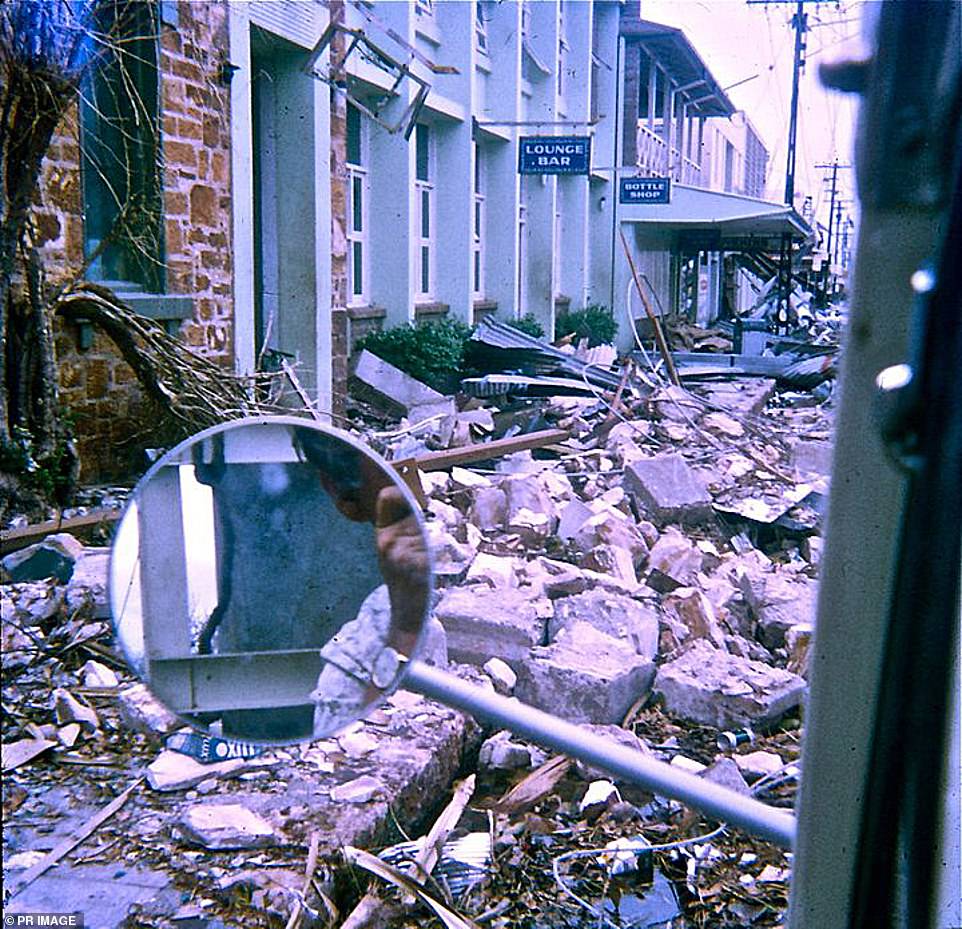 While no lives were lost in the category-two cyclone, there was still extensive damage across the city, mostly from fallen trees.

‘It takes a long time to recover from the cost, particularly for businesses. So small and medium-sized business need a contingency plan so they’re prepared for when these emergencies happen.’

Dr Surjan says it’s not uncommon to see complacency among the growing population of Darwin, which has attracted many residents from overseas and other parts of Australia not accustomed to cyclone activity.

‘In the eye of a cyclone, people often have parties out in the open, which isn’t a good thing,’ Dr Surjan said.

He says the community plays an important role in cyclone preparedness.

‘The community is the first responder to cyclones,’ he said. 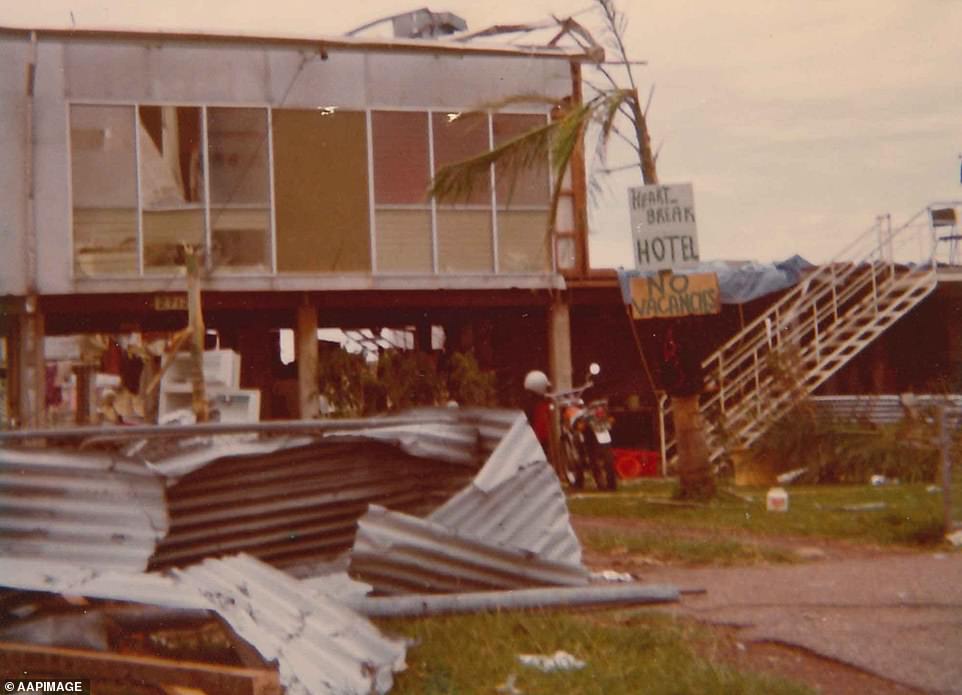 This Darwin resident had a sense of humour judging by these signs. The home was one of the few suburban houses that remained on its foundations when the city was smashed 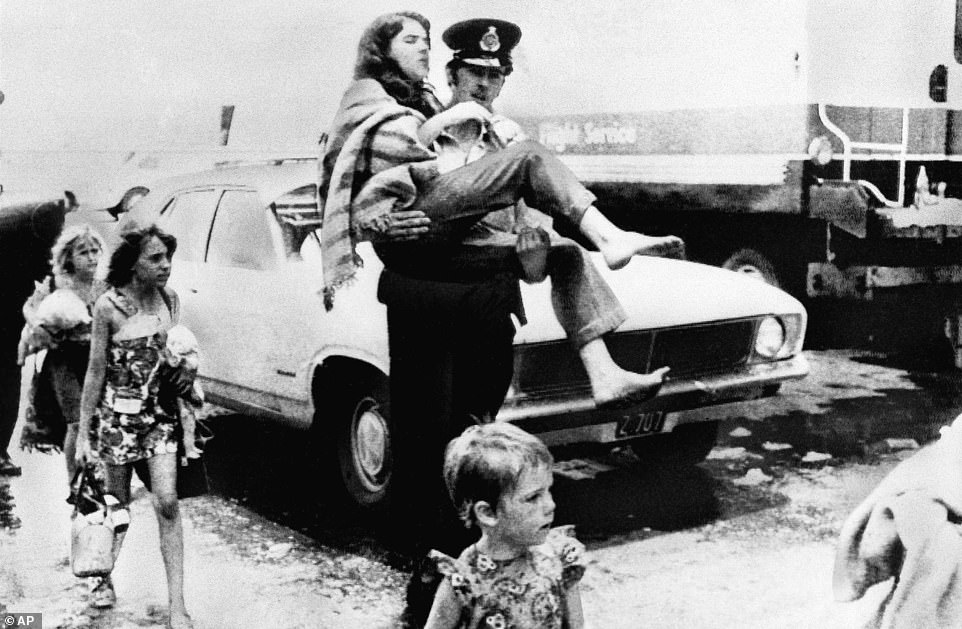 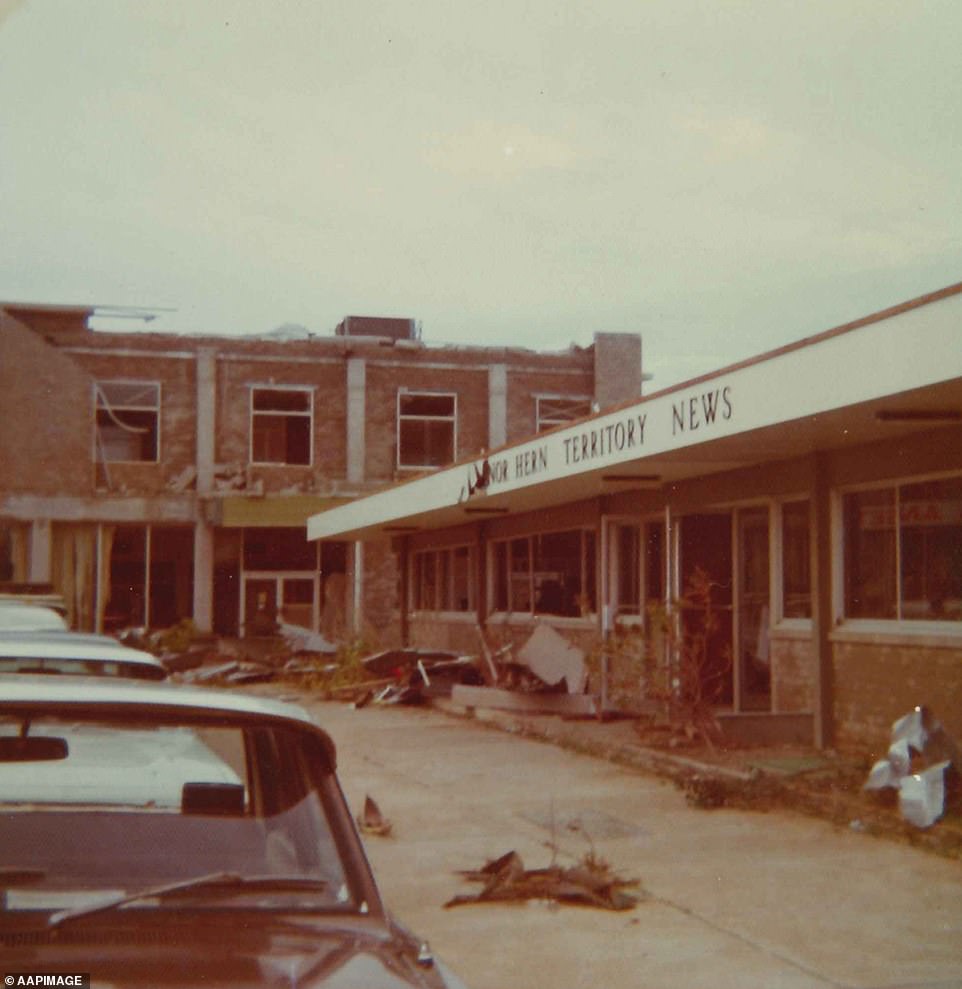 Cyclone Tracy continues to have a long-lasting affect on residents who were living in Darwin at the time.

A Facebook page called Surviving Tracy: Real Stories is dedicated to reliving memories of the devastation that went as far as the eye could see.

‘How did you survive your date night with Tracy – the b**** from hell? Lets make sure no more stories are lost,’ the page description states.

Veteran newsreader Ron Wilson was 19 when his family home was destroyed. 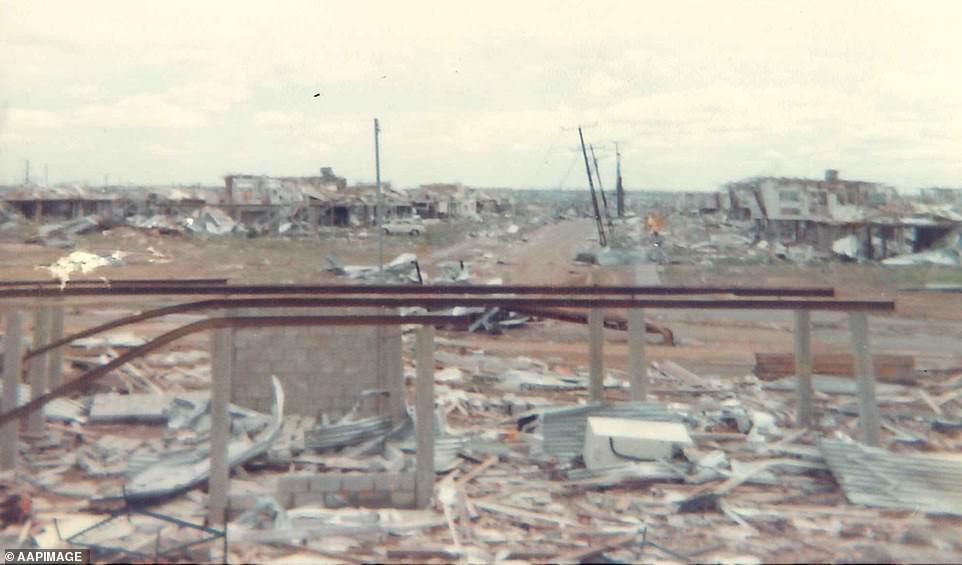 There were scenes of total devastation in Darwin in the aftermath of Cyclone Tracy, which wiped out entire suburbs

More than four decades on, Mr Wilson still has post-traumatic stress disorder caused by the disaster and broke down in tears on live television earlier this year while discussing the awful effect it had on his family.

‘It becomes part of your life when it happens during your formative years, where a lot of your ideals are strongly influenced by such a s a big impact,’ he told Channel Seven’s Weekend Sunrise in May.

‘Our whole family was affected by it.’

An emotional Mr Wilson said he’ll never forget the support given by the Salvation Army afterwards, with the charity would giving him and his mum $20 a day.

‘They were there for us,’ Mr Wilson said.

‘I spent the money on public phone, trying to get a job. This was in the days before mobile phones so to apply for jobs, you had to go and stand there.’ 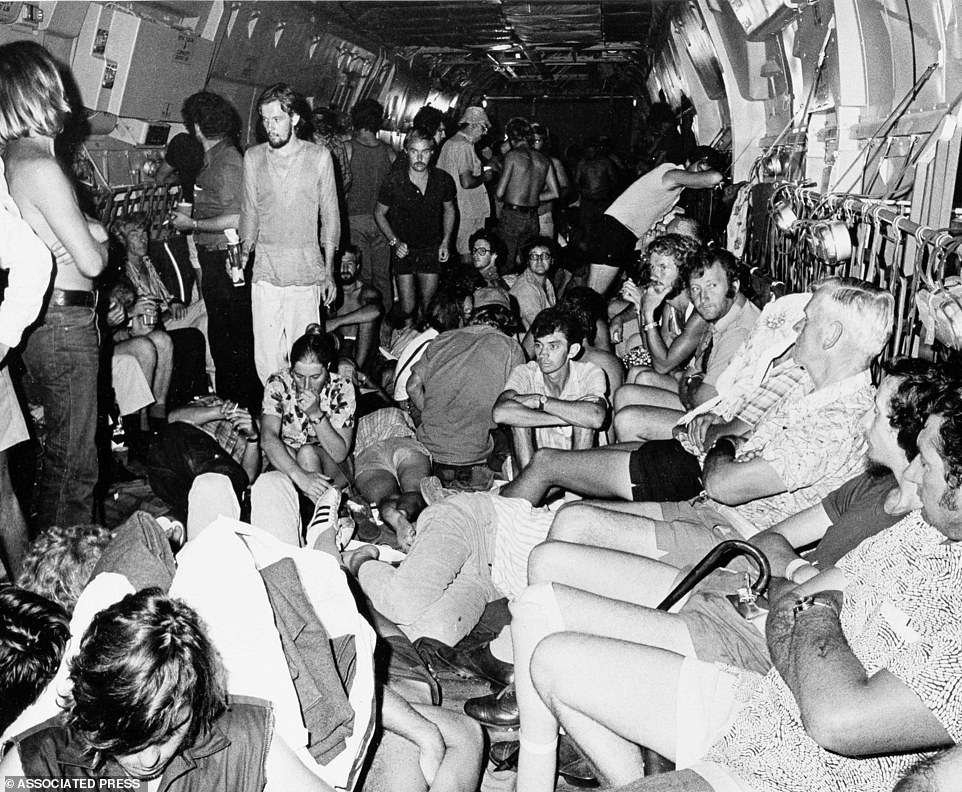 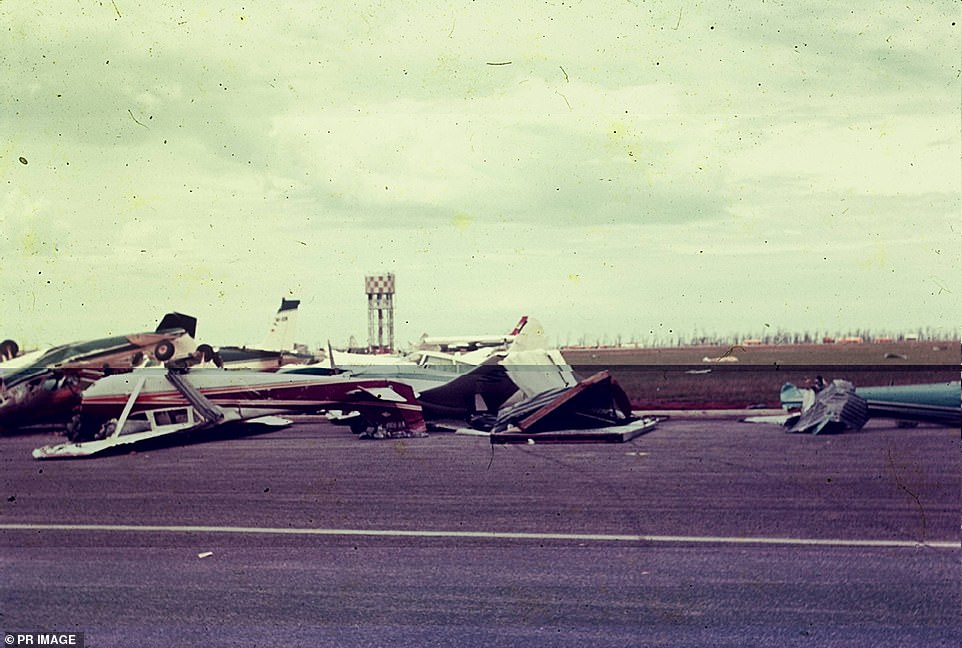 An anemometer at Darwin Airport recorded a gust of 217kmh before it was destroyed. Pictured is the aftermath at the airport