Hospital admissions for sepsis have more than doubled in three years – including an ‘alarming’ rise in young children being treated, figures show.

Experts warned that antibiotic resistance is fuelling the soaring numbers and warned parents to be extra vigilant for signs of the illness.

And the number of babies and toddlers admitted with the illness has risen by almost a quarter to 38,401.

There were a further 48,647 admissions for older children and young people under the age of 24 in 2017/18, an increase of a third in three years.

Sepsis strikes when an infection such as blood poisoning sparks a violent immune response in which the body attacks its own organs. The number dying after contracting sepsis is currently 52,000 a year in the UK. But experts point out that despite a rise in cases, the number of Britons dying from sepsis is falling.

The Daily Mail has been pushing for improved sepsis care for several years and our campaign has been credited with improving awareness of the illness.

Dr Ron Daniels, chief executive of the UK Sepsis Trust, said: ‘It’s highly likely that this [raised awareness] means that we’re now closer to the true number of cases than we were three years ago.’

But he warned the rise in cases is also being fuelled by decades of over-use of antibiotics, which has led to the development of drug-resistant bacteria.

Dr Daniels said: ‘A decade or two ago, infections such as urinary tract infections would be controlled by simple antibiotics – not so today.

‘If the antibiotic doesn’t begin to control the infection it may become more complicated – ideal breeding grounds for the onset of sepsis. A simple urinary tract infection could develop into a complex case in which the kidneys are also involved. Such complex infections, and any infection remaining under-treated, increase the risk of sepsis developing.’

Antibiotics also remain the only really effective treatment for sepsis and experts say every 30-minute delay in treatment increases the risk of death by 7 per cent. 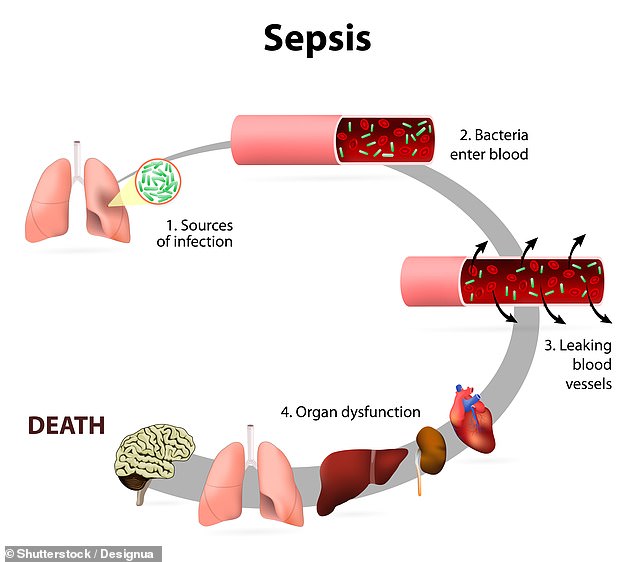 Sepsis or septicaemia is a life-threatening illness. Presence of numerous bacteria in the blood, causes the body to respond in organ dysfunction (file image)

Dr Daniels said the soaring levels of the illness among children was ‘alarming’ and urged parents to be on the alert for any signs. He said: ‘What this means is that parents need to continue to be aware of meningitis, but to arguably be even more aware of sepsis as it affects far more children and can be equally deadly.’

A growing and ageing population also means that more older Britons are now suffering from sepsis than before.

Invasive procedures on the very young or very elderly, whose immune systems are compromised, can increase the risk of infection.

The Mail has been campaigning to improve sepsis care since 2016, following the tragic case of one-year-old William Mead.

He died from the condition in Treliske Hospital, near Truro in Cornwall, after GPs and other staff missed the warning signs.

Celia Ingham Clark, medical director for clinical effectiveness at NHS England and NHS Improvement, said: ‘The NHS has become much better at spotting and treating sepsis quickly over the last few years, so even though more cases are being diagnosed, the chances of dying from it are falling.’