Explore South Africa at home thanks to Google Street View

For the first time ever, all of South Africa’s 19 national parks are available to explore from anywhere in the world on Google Street View.

Prominent tourist attractions including Kruger National Park, Table Mountain and Cape Point – as well as 17 previously un-trekked nature reserves – are now available to explore from the comfort of your own home.

Over 50,000km has been mapped thanks to over 200 volunteers. Rangers, nature enthusiasts, guides and tech fans trekked for 12 months, covering more than 900km on foot with a Google Street View camera. It mapped out 232 points of interest across all nine provinces in the country, including six Unesco World Heritage sites.

Thanks to Drive South Africa and Google Street View, some of South Africa’s most incredible areas – such as Table Mountain, pictured – are now 360-degree discover-able

On their journeys, the volunteers stumbled across some of the country’s most famous wildlife, including cheetahs and elephants.

Five videos have been produced to introduce new visitors to some of South Africa’s most spectacular sights. They focus on Table Mountain, Kruger National Park, the ravine-ridden Ukhahlamba-Drakensberg, the Garden Route – the beautiful, lake-dotted south west coast – and ‘hidden gems’.

Once each video is finished viewers are deposited on location in Google Street View and rotate around in any direction using 360-degree technology. 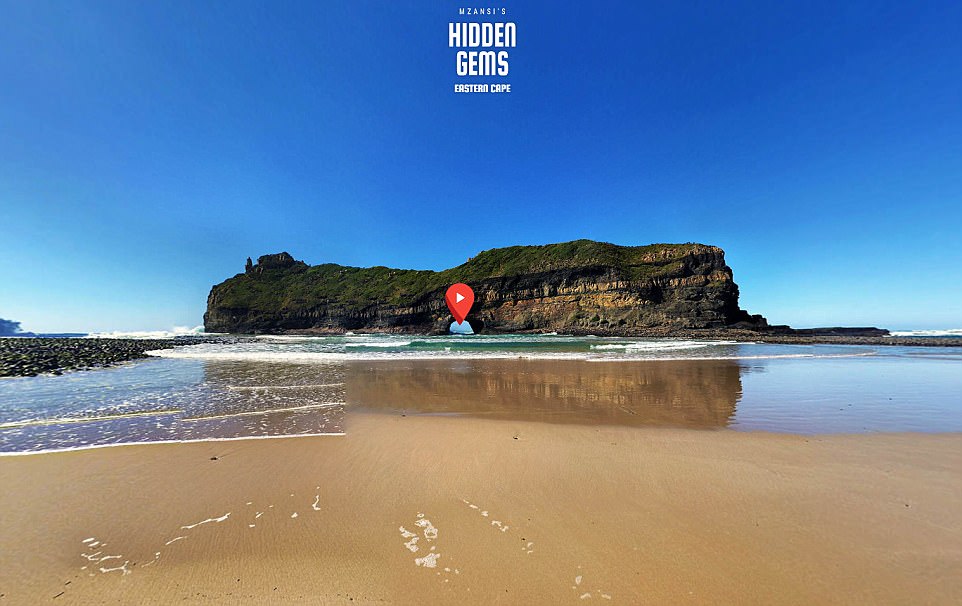 Over 50,000km has been mapped thanks to over 200 volunteers. Rangers, nature enthusiasts, guides and tech fans trekked for 12 months, covering more than 900km on foot with a Google Street View camera, to map out 232 points of interest across all nine provinces in the country, including six Unesco World Heritage sites 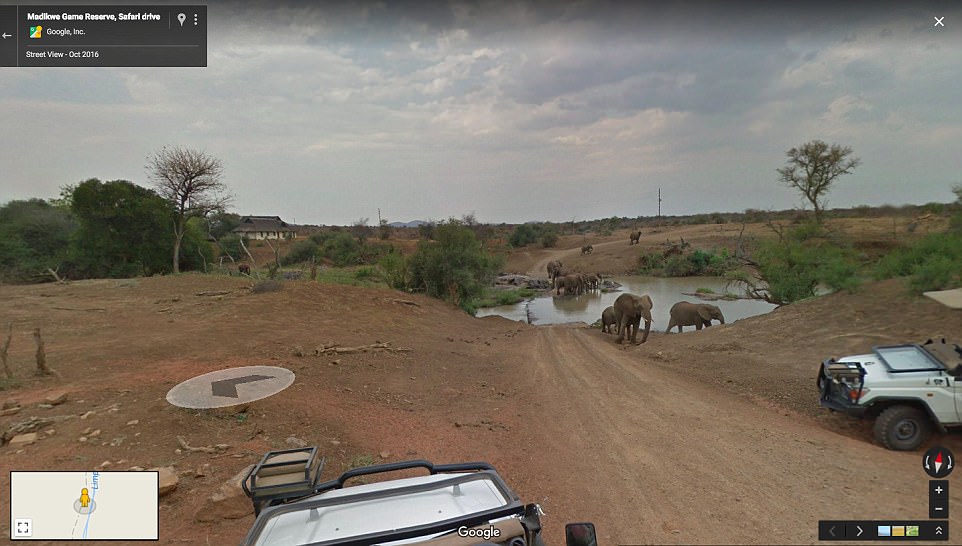 Rush hour: Street View volunteers came across elephants and cheetahs on their travels, some of which were in previously un-trekked areas

Street View users can now climb seven new trails to the top of Table Mountain, hike the famous five-day Otter Trail, track cheetah on foot and walk with elephant and other incredible wildlife.

Users can see Mapungubwe Hill, home to an ancient African civilisation, the Richtersveld with its arid moonscapes, the towering Drakensberg Mountains, and iSimangaliso Wetland Park, South Africa’s oldest Unesco site and a critical habitat for a range of species. 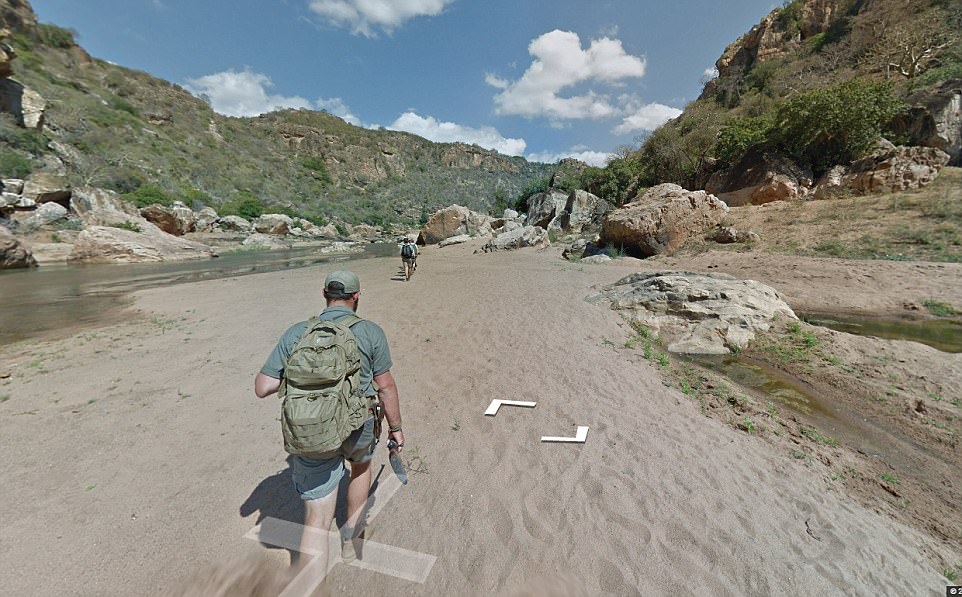 Volunteers captured real treks through the South African landscape allowing for viewers to get a feel for what life is like on the ground. This is Lanner Gorge in the famous Kruger National Park 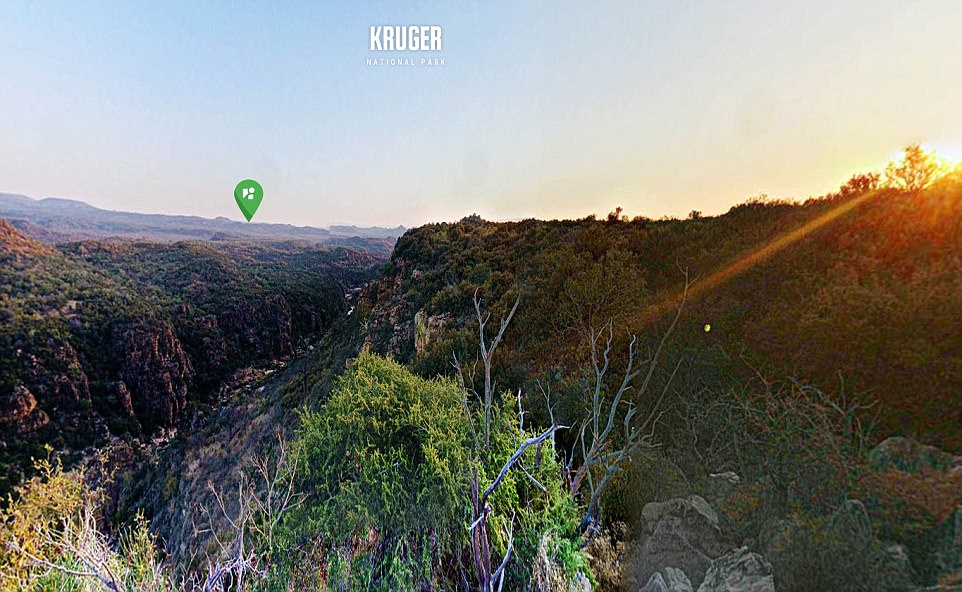 Start your Kruger adventure at the top of a mountain. Interactive technology lets you move in any direction or click on a Google point of interest for a whistle-stop tour

Google worked with Drive South Africa on the year-long project, which is part of Google’s Street View Camera Loan Programme. Anyone can apply to borrow the 360-degree camera technology and help map the planet.

Andre Van Kets, outdoor enthusiast and founder of the Cape Town-based travel company, approached Google about loaning the Street View Camera in order to showcase South Africa to travellers around the globe.

Van Kets comments: ‘We’re delighted to be able to showcase some of South Africa’s best sites to people all over the world, including incredible un-trekked nature reserves. Travellers and nature enthusiasts can explore some of the most beautiful areas in South Africa as though they are there themselves, all from the comfort of their armchair. 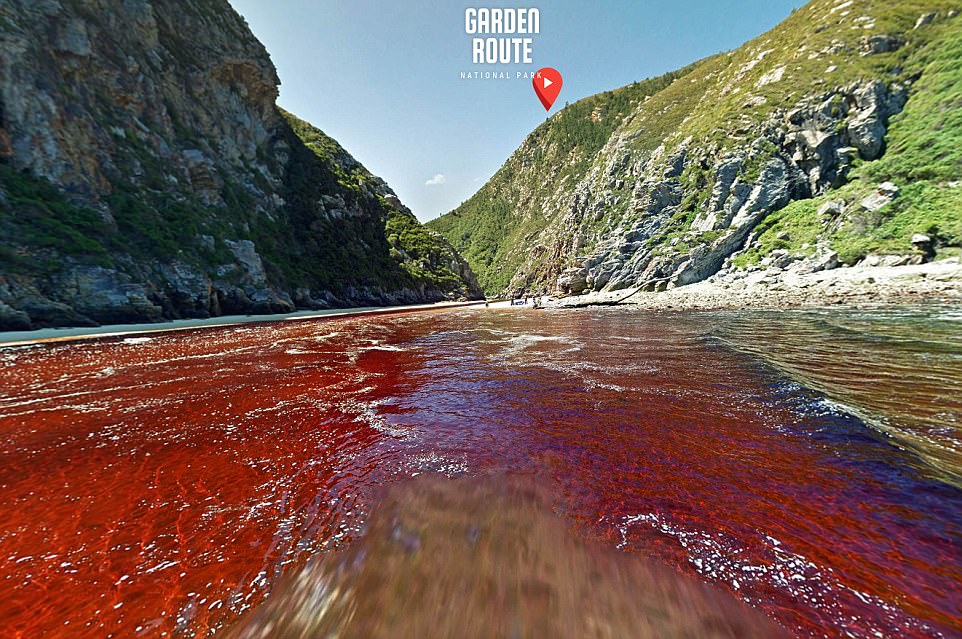 Wish you were here? The Otter Trail is a famous five day hiking route that is now captured for armchair adventurers

‘The Trekker camera is a 22 kg custom-made backpack fitted with 15 cameras pointing in all directions. The on-board technology plots the camera’s exact location on the trail. While recording, the camera takes a 360-degree photo every two-seconds. It’s basically the off-road equivalent of Google’s Street View cars.’

The South African project was inspired by a similar project showcasing the US National Parks and is a culmination of Street View imagery with video, photos and stories from the trail, offering viewers unique perspectives.

Five hours hiking was worth it for this amazing view over the Blyde River. The Google Street View volunteers captured mountains, beaches and savannah 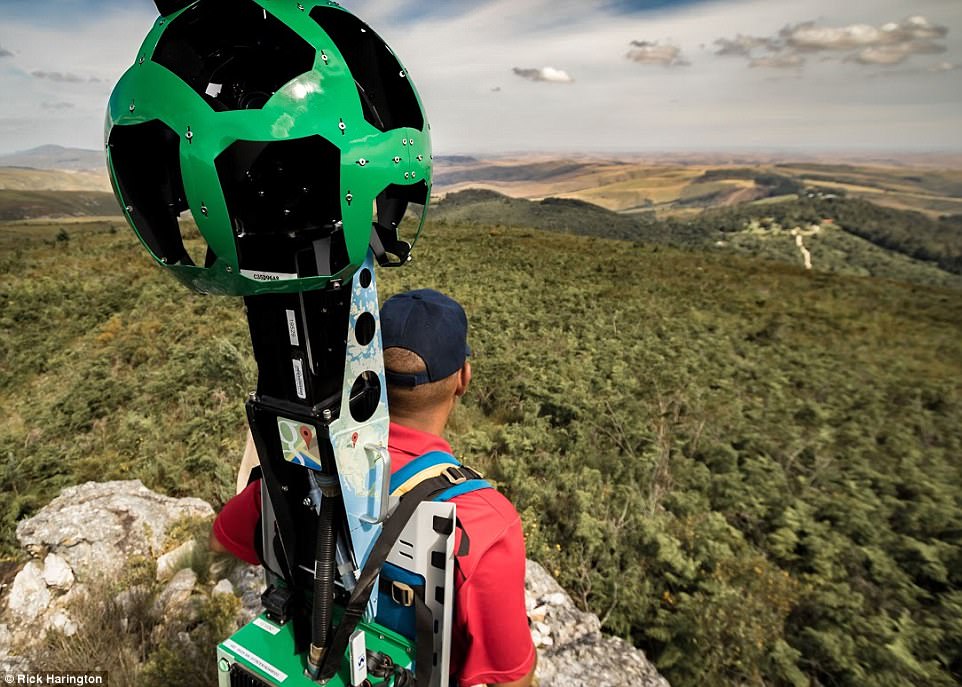 Top of the world: The view from one of the most scenic hikes in Grootvadersbosch National Park as a local guide carries the 22kg Street View camera