Explorers penetrating deep into the Mosquitia rainforest of Honduras have rediscovered species thought to be extinct at ancient ruins known as the ‘Lost City of the Monkey God’.

The three-week mission, carried out by a team of scientists led by Conservation International’s Rapid Assessment Program, discovered a veritable ecological treasure trove at the hidden ruins, scientists announced on Thursday.

The three rediscovered species which were believed extinct are:

‘Our team of scientists were shocked at the discovery of tremendously rich biodiversity, including many rare and threatened species,’ said Trond Larsen, Director of Conservation International’s Rapid Assessment Program, in a statement.

The Pale-faced Bat (Phylloderma stenops) was rediscovered during this survey after more than 75 years since it was last documented in Honduras in 1942. These bats live near streams where they feed on fruit and insects 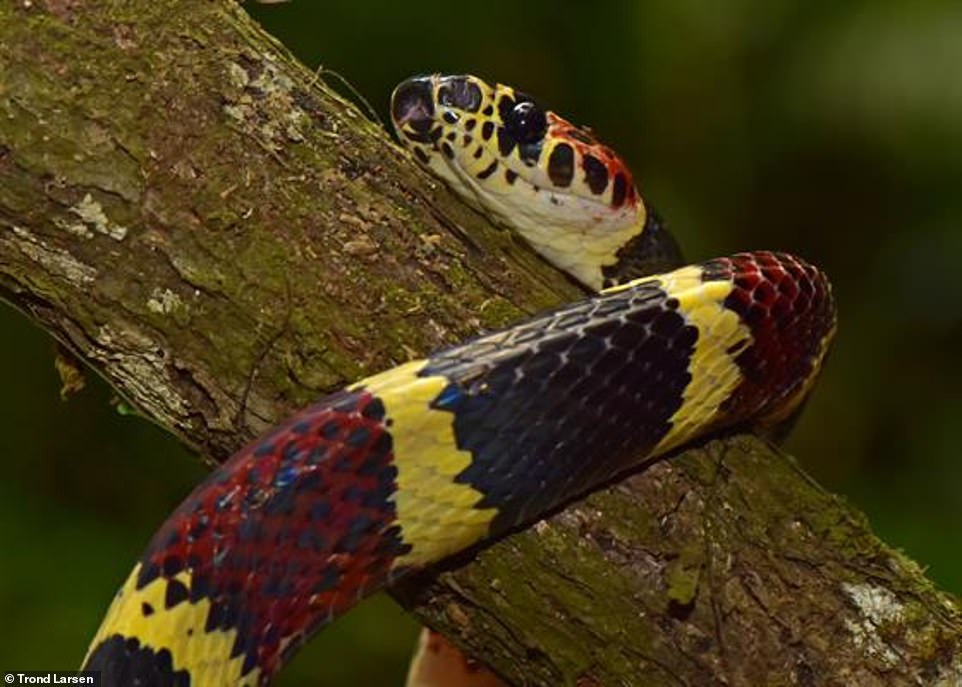 The False Tree Coral Snake , which had not been reported in Honduras since 1965, was rediscovered on the mission 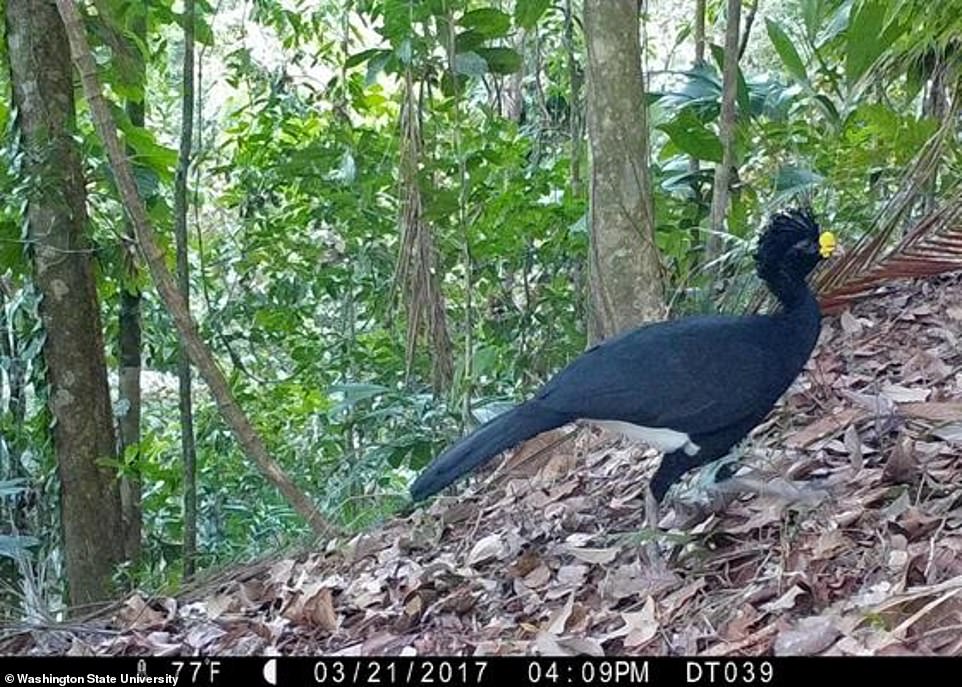 The Great Curassow has been depleted throughout much of its range due to hunting, but is common at Ciudad del Jaguar 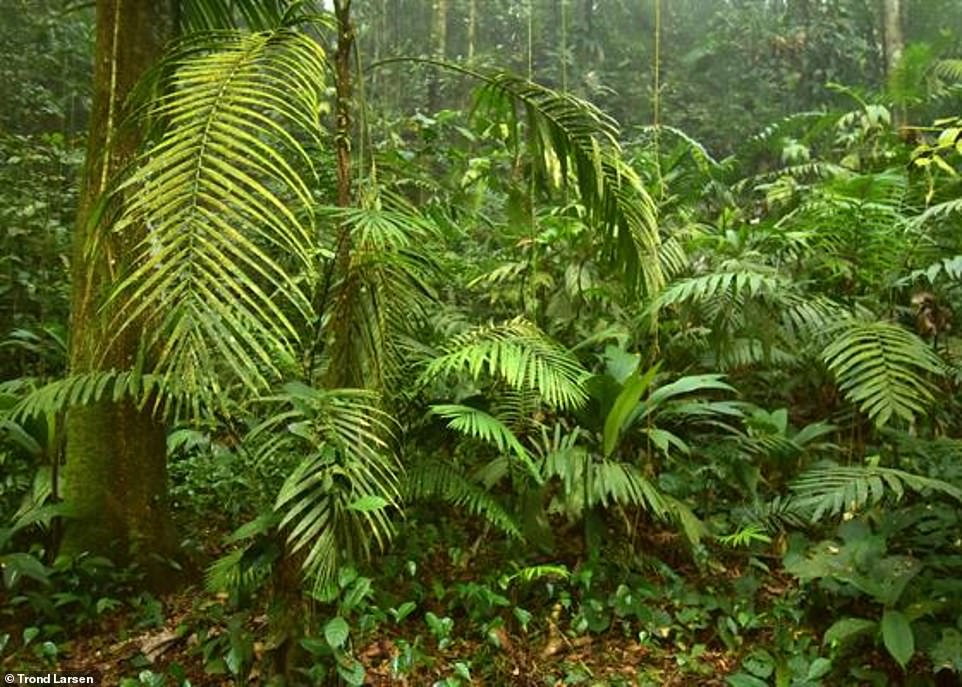 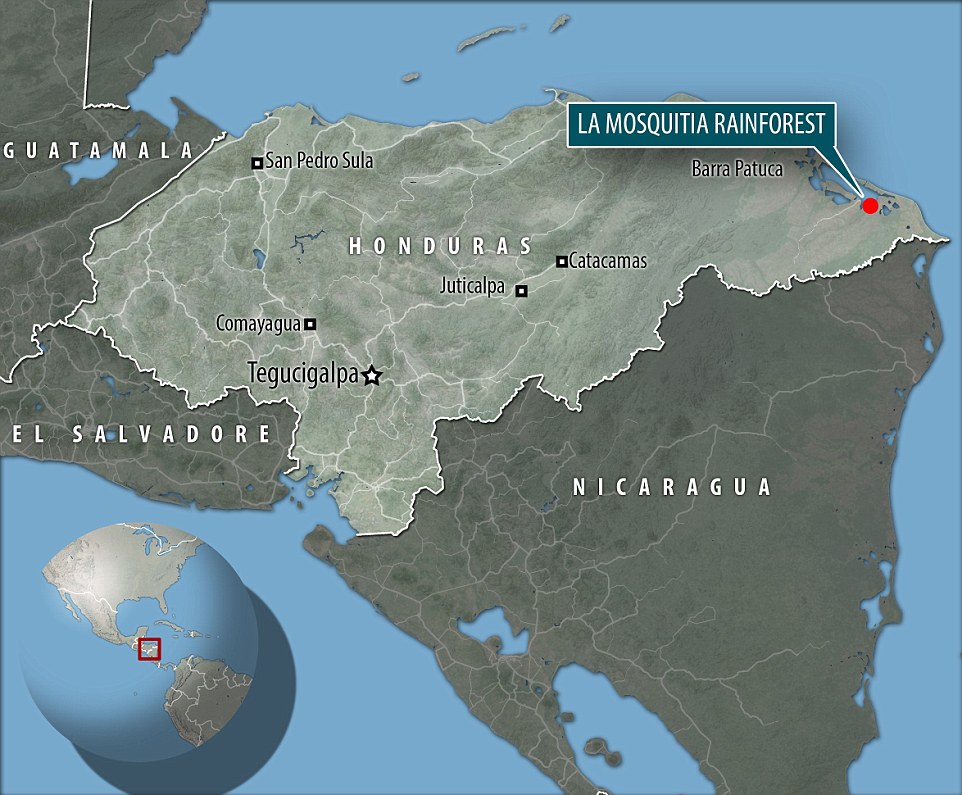 The Lost City of the Monkey God was found in the La Mosquitia jungle, a dense rainforest that runs from Honduras into Nicaragua, in Central America

Larsen called the site ‘one of the few areas remaining in Central America where ecological and evolutionary processes remain intact.’

For hundreds of years, local rumors among tribes people and Spanish explorers had spoken of a city full of treasure lost somewhere in the Mosquita jungle.

The site, dubbed the ‘Lost City of the Monkey God’, is the subject of a movie and book by the same name and was hidden for centuries within a remote valley, guarded on all sides by steep ridges, in one of the world’s densest jungles.

After centuries of local legends and fruitless jungles treks, the incredible ancient site – untouched for more than 600 years – was first discovered by a group of intrepid explorers in 2015.

The latest expedition to catalog the site’s incredible biodiversity discovered 22 species that have never before been recorded in Honduras, and many, such as the Great Green Macaw, which are endangered or extremely rare.

The researchers were also astonished to discover a livebearing poeciliid fish called a molly, which appears to be new to science. 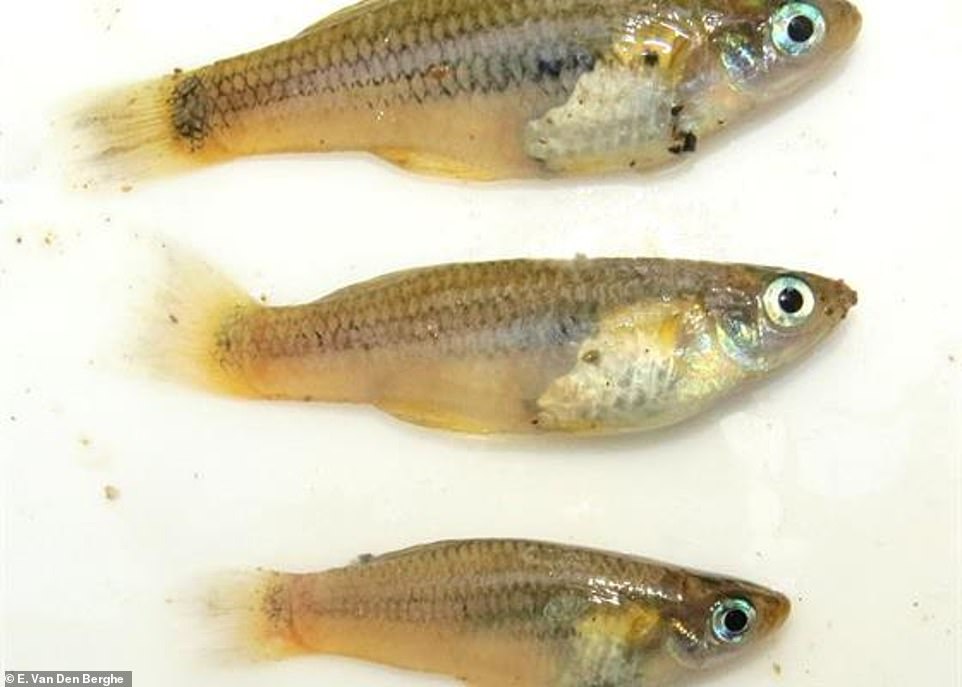 Three individuals of a livebearing poeciliid fish called a molly (Poecilia sp.) appear to represent a species new to science 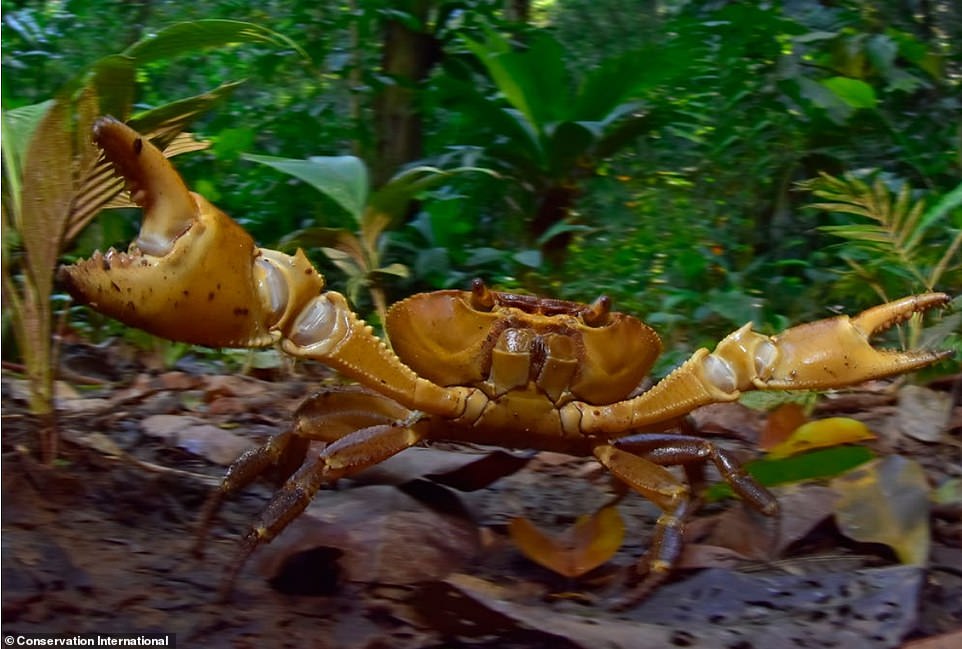 A freshwater crab adopts a defensive posture. Crabs were observed with carapace diameter to 10 cm and some small shrimp were seen at night 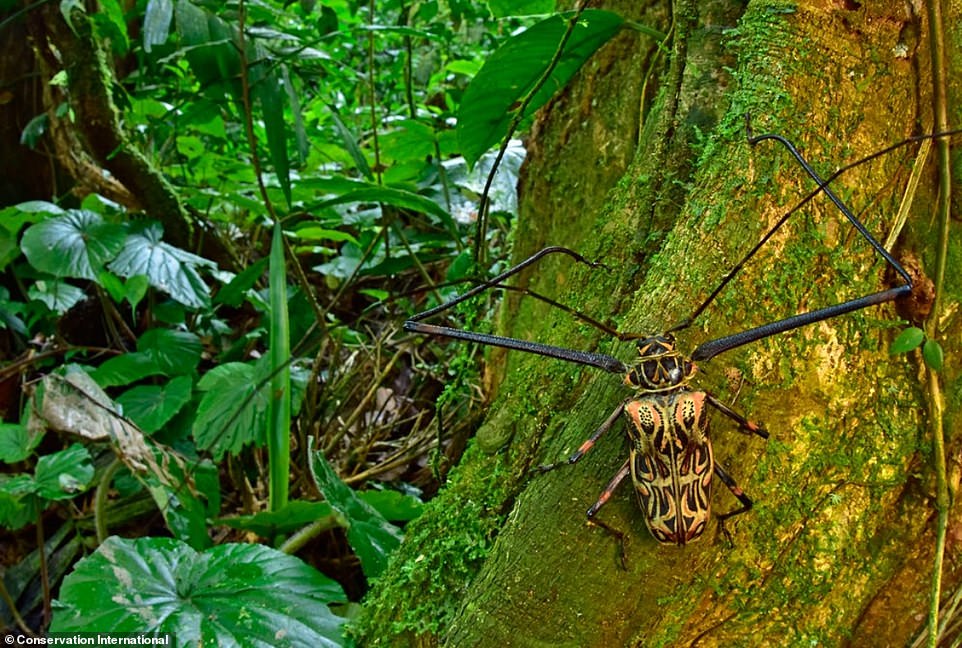 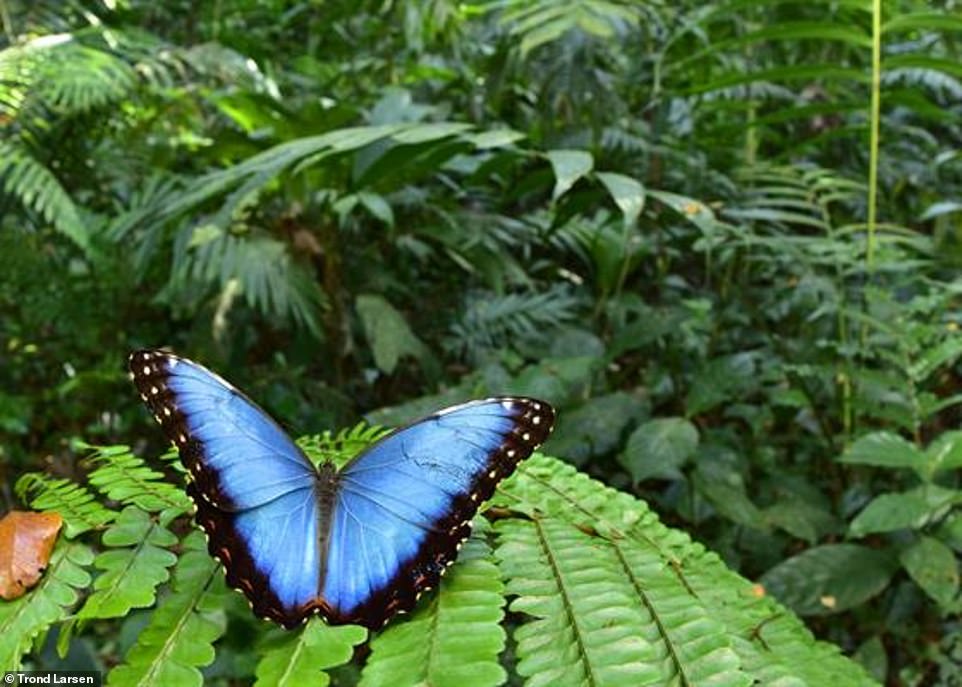 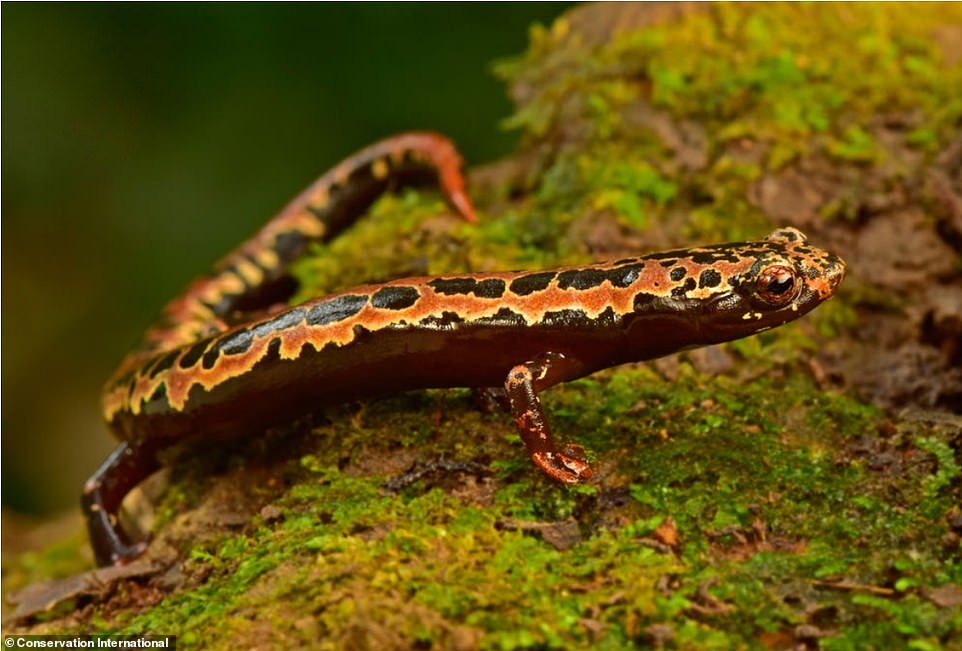 Also cataloged was thriving population of white-lipped peccaries, a pig-like species extremely sensitive to deforestation and degradation, and which no longer found throughout much of Central America because they require vast areas of intact forest to survive.

The abundance of peccaries and other prey species support a complete community of carnivores, including large cats such as jaguar and puma. The scientists say that few places remain that harbor this full spectrum of species where intact ecological links maintain a healthy, balanced ecosystem.

In total, the team documented 246 species of butterflies and moths, 30 bats, 57 amphibians and reptiles, as well as numerous plants, fishes, mammals and insects.

They also documented 58 species of plants that have important uses by people, and observed species typically associated with pre-Hispanic settlements of Mesoamerica, such as cacao and cacao de monte.

‘Overall, our findings demonstrate that the area is of global environmental as well as archaeological significance,’ Larsen said.

Larsen stressed the importance of protecting and preserving the site, calling it a ‘critical ecosystem.’ 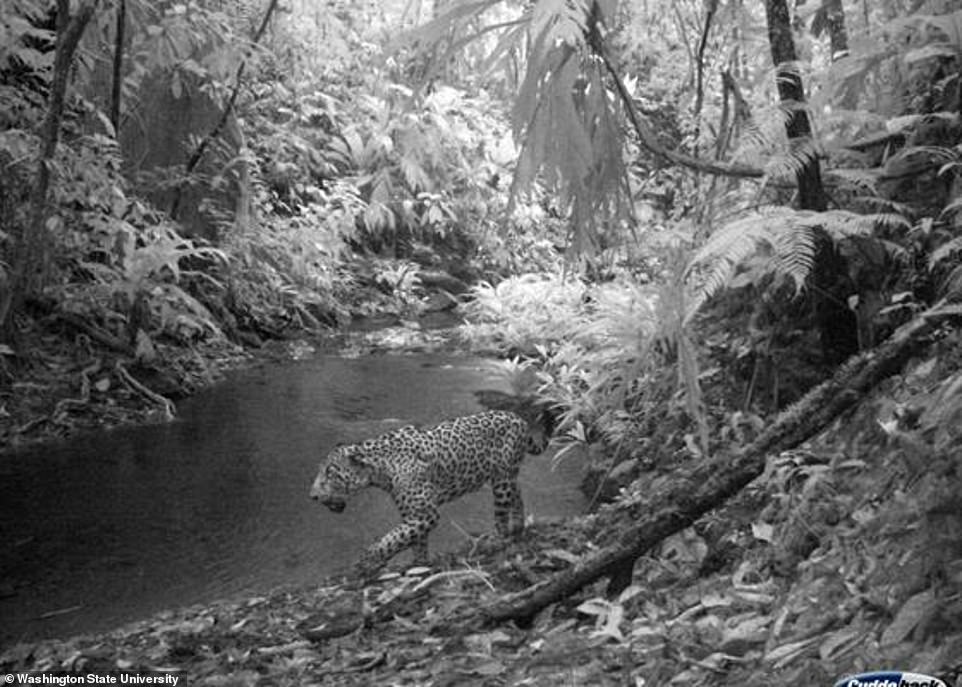 Jaguars are the apex predator here, keeping the ecosystem in balance by limiting prey species 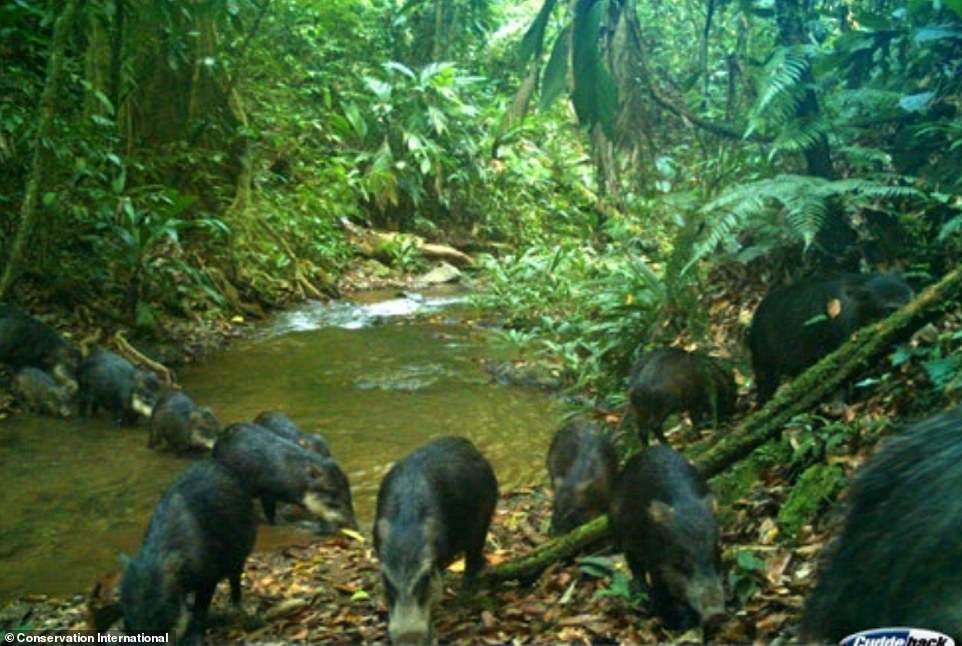 White-lipped Peccaries, which represent important prey for jaguars. When startled or threatened, they produce loud barks and clacking noises with their teeth 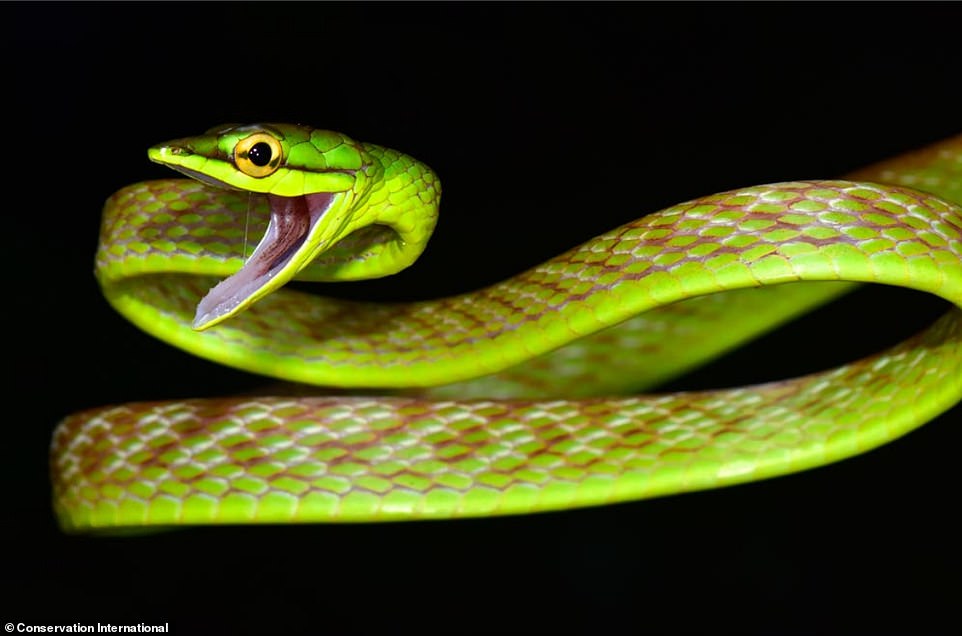 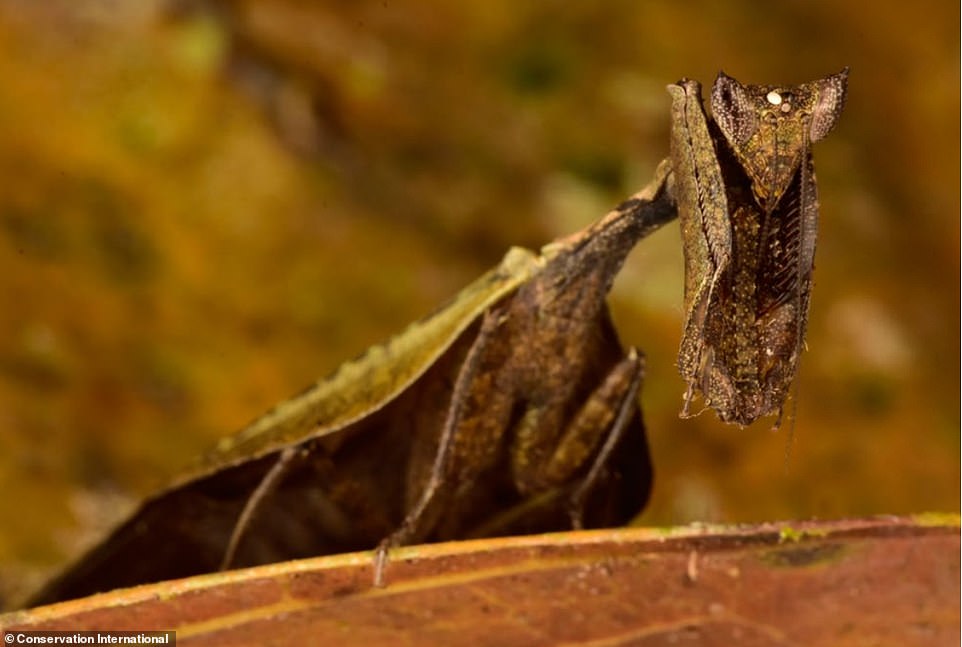 A variety of preying mantis species were observed, several of them attracted to light traps

Dr. John Polisar, Coordinator of the Wildlife Conservation Society Jaguar Program and a member of the RAP expedition team said: “We have been doing field work in the indigenous territories of La Moskitia for 14 years, and this site stood out as being simply gorgeous.’

‘However, what really made it leap out was its very complete assemblage of native large mammals, something becoming all too rare in these regions,’ Polisar continued.

‘Because of its presently intact forests and fauna the area is of exceptionally high conservation value. It merits energetic and vigilant protection so its beauty and wildlife persist into the future.”

The expedition was commissioned by Bill and Laurie Benenson, along with explorer Steve Elkins, who led the original search and discovery of the archaeological site, and the support of the President of Honduras, Juan Orlando Hernández.

In light of the archeological and scientific findings, President Hernández initiated the Kaha Kamasa Foundation to promote ongoing scientific research and to increase monitoring and protection of the rainforest surrounding the archaeological sites at the ‘Lost City of the Monkey God’,

LOST CITY OF THE MONKEY GOD

For hundreds of years, local rumours among tribes people and Spanish explorers have spoken of a city full of treasure lost somewhere in the Mosquita jungle of Honduras.

The city is believed to have been the home of a wealthy civilisation that suddenly vanished after a ‘curse’ ravaged the area around 600 years ago.

Historians have speculated that the ‘curse’ was in fact a string of diseases brought from Europe by colonialists.

Some people call it the White City Of Gold, after ancient texts described ivory temples filled with treasure – and western explorers first made reference to it from conquistador Hernando Cortes to King Charles V of Spain in 1526.

Since then countless adventurers have scoured the jungle for the ancient civilisation.

One such adventurer suggested that the city was in fact known as the White City of the Monkey God.

Theodore Morde, writing of his adventures in US magazine The American Weekly, said that local tribes people told him of the monkey-worshipping civilisation.

He said locals told him that a ‘monkey god’ from the ancient city kidnapped a local woman and bred half-human, half-chimp children. The children were then hunted for revenge.

Local tribes people also reportedly related the same story to an anthropologist, according to a Honduran media report.

Morde said that local people told him of a huge monkey temple inhabited by a civilization known as the Chorotegas, and claimed to have fond evidence of such a place on his expedition in 1939-40.

But Morde never revealed the location of his alleged find and killed himself in 1954.