Eileen Hall at the Los Tayos site in Ecuador

They were an extraordinary band of explorers – on a quest that was, literally, out of this world.

In 1976, an unknown engineer from a small town in Scotland teamed up with Neil Armstrong, the astronaut whose ‘small step’ just a few years earlier had first put mankind on the Moon.

Fighting through the dense jungles of South America, the unlikely pair were seeking an even more unlikely goal: a remote cave system where, legend had it, they would find a trove of ancient mystical texts written on gold – and conclusive proof that aliens had once visited the Earth.

The story of their bizarre search has remained largely untold for 40 years.

But now the daughter of Stan Hall, who led the expedition, has shone new light on what is surely one of the most unusual expeditions ever undertaken by a Scottish explorer.

What’s more, 31-year-old Eileen Hall, an architectural assistant based in Edinburgh, is now planning to retrace her father’s footsteps through the Andes aiming finally to complete the extraordinary quest he began more than four decades ago.

Speaking exclusively to The Scottish Mail on Sunday from Quito, the capital of Ecuador, she said last week: ‘I am determined, in my lifetime, to get to the bottom of what my father and Neil Armstrong started all those years ago.

‘The expedition members found out just how far you can push yourself, physically and psychologically. They pushed themselves right to the edge.

‘This place is utterly fascinating for all its mystery and magic – and it still remains largely undiscovered.’

Nothing in Stan Hall’s background hinted that he would end up leading such a strange expedition. Born and raised in Dunbar, East Lothian, he enjoyed a conventional upbringing and trained as a civil engineer. As a young man in the 1960s he had what he claimed was an ‘out of body’ experience that challenged his understanding of the world.

Ms Hall explained: ‘Nothing in his early life pointed my dad, who had a scientific, analytical mind, to esoteric adventure. But he said that when he was 26 and living in Edinburgh, he had an experience of being immersed in white light. He said he was shown infinity and the inter- connection of this dimension and others.’

About 12 years later, Mr Hall read a book called The Gold of the Gods by Swiss author Erich von Däniken.

Published in 1974, it outlined a theory that extraterrestrials visited the Earth in ancient times. The book included the testimony of a Hungarian explorer called Juan Moricz who claimed to have found a mysterious ‘metal library’ of mystical texts, belonging to an ancient civilisation and supposedly written on gold. 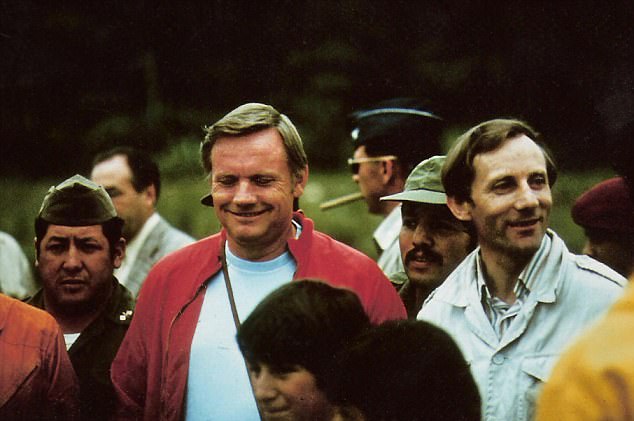 Ecuador encounter: Neil Armstrong (left) seen with Stan Hall (right), was intrigued by the search for evidence of aliens from outer space

Moricz reportedly wrote: ‘The subterranean world exists and inside its chambers I have found objects and records of great cultural and historical importance for mankind.’

Inspired to discover the truth, Mr Hall made the extraordinary decision to travel to Ecuador and follow Moricz’s directions to look for the treasure.

Even more extraordinary, he persuaded Neil Armstrong to join him on the quest.

In 1969, half a billion people around the world had watched in awe as Armstrong earned his place in history by becoming the first man to set foot on the Moon and uttering the immortal words: ‘That’s one small step for man, one giant leap for mankind.’

After leaving a plaque on the Moon which stated: ‘We came in peace for all mankind,’ Armstrong returned to Earth and – unlike his fellow astronauts – lived quietly and did not court publicity.

More than 40 years later, Ms Hall is still amazed that Armstrong not only replied to a letter from her father but enthusiastically agreed to join him on his quest.

Ms Hall said: ‘My father just wrote on spec to Neil Armstrong. Neil was interested in what goes on in outer space and dad had read von Däniken’s book, which has some fairly ‘out there’ theories in it. My dad himself had links to the Armstrong clan – his mother was an Armstrong – and mentioned it to Neil in his letter.

‘It was a shot in the dark but my dad wrote: “We are organising this expedition to Ecuador, would you like to come?”

‘To his surprise Armstrong replied: “Yes, it would be an honour to join you.”’ 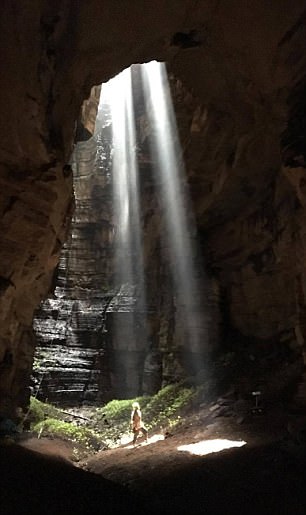 Cave of mysteries: Eileen Hall at the Los Tayos site in Ecuador

Armstrong not only became a participant but also honorary president of the expedition, which won backing from scientists around the world as well as the Ecuadorian government.

Ms Hall added: ‘Dad had never done an expedition before. But he was a planning engineer and a project manager. That’s why he thought he could manage it. The expedition was a British/Ecuadorian scientific and military endeavour. It had a broad remit covering archaeology, biology, and geology and involved professional cavers. It was initially designed to map out the cave system and establish a scientific framework for long-term investigation of the area.

‘The “metal library” was supposed to contain books made of gold-leaf and possibly an alloy. They were said to have links to the Sumerian civilisation, the first urbanised people of Mesopotamia.’

IN 1976, the group travelled to the Morona-Santiago province on the northern slopes of the Cordillera del Cóndor, a mountain range that runs between Ecuador and Peru.

After battling through the jungle, they arrived at the Cave of the Tayos, in the San Miguel de Conchay parish, where Armstrong was greeted as a hero by the local Shuar tribe who knew of the Moon landings.

At the entrance to the caves, the two explorers abseiled into the darkness.

Mr Hall later wrote: ‘The Honorary President [Armstrong]… was to descend a 6-inch-wide wire ladder which was free-hanging 65 metres into the dark interior and explore many kilometres of these Andean Halls of Valhalla, accompanied by birds, bats, snakes, scorpions, tarantulas and rushing underground torrents, at times up to his neck in ice-cold water.

‘An entourage of civil and military personnel, including local Shuar elders, who had arranged a speech of welcome, wound slowly down the now well-worn pathway to the cave mouth. Armstrong calmly moved forward. 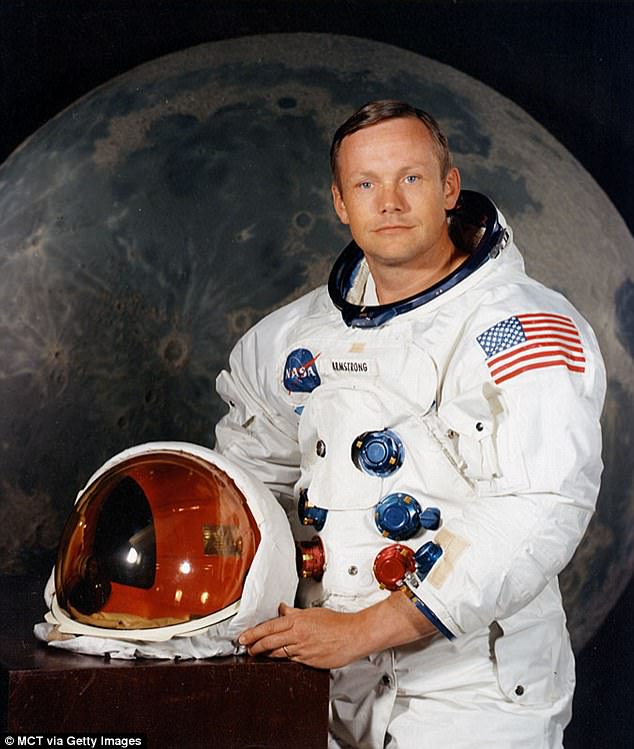 In 1969, half a billion people around the world had watched in awe as Armstrong earned his place in history by becoming the first man to set foot on the Moon and uttering the immortal words: ‘That’s one small step for man, one giant leap for mankind’

‘Once safely harnessed, he stepped unhesitatingly onto the swing-wire ladder and began to descend… Everyone watched him make yet another ‘small step for man… and who knows, perhaps also for mankind!

‘Such steps only occur on sacred ground, certainly sacred at that moment to the silent, watching Shuar.

‘The symbolic similarity with his ladder descent onto the Moon was self-evident.’

However, the team’s hopes of making a remarkable find evaporated after a month when they realised the treasure cave was not where they expected to find it.

Ms Hall explained: ‘They found the entrance to the caves, and they mapped about 16km of the underground system.

‘But sadly, it was all they could do with the resources they had and they were forced to retreat before they found the treasure.’

Controversial writer whose star rose with Chariots of Gods

His most famous book, the Chariots of the Gods – Was God an Astronaut? was published in 1968.

In it, he argues that both science and history point to extraterrestrial intervention in human civilisation.

He theorised that humans were the descendants of galactic pioneers – and claimed ‘archaeological discoveries’ such as an alien astronaut preserved in a pyramid proved it.

His website states: ‘Individual people were not “brought to heaven” but rather trained in a spaceship.’

His books include Gods from Outer Space; The Gods Were Astronauts; Arrival of The Gods and History Is Wrong.

One, Tomy and the Planet of Lies (2012), is described as: ‘A novel story with strongly autobiographic traits.’

Next Sunday, he is due to sail from New York City with other authors on a commercial cruise trip. Cabins on the ‘Ancient Alien Cruise’ cost from US $1,549 (£1,170) upwards and guests will be treated to a series of seminars while at sea.

However, Mr von Däniken is not without his critics. Perhaps the most high profile was the world-renowned cosmologist, NASA robotics expert and Cornell University Professor of Astronomy Carl Sagan, who died in 1996.

Von Däniken’s website complains: ‘In chorus with some others, Dr Carl Sagan denounced my work as worthless, pseudo-scientific nonsense that no sane scientist would take seriously.’

Their bitter disappointment was offset slightly when an Ecuadorian national came forward with a claim that as a young man, he had been to the cave and seen the treasure von Däniken described.

Mr Hall interviewed him and was so convinced by his testimony that they continued to search – but it was to no avail.

Despite their disappointment, Armstrong and Hall’s resolve and friendship endured.

‘They had similar backgrounds – they were both engineers and both had this Scottish ancestry, so they had lots to talk about’, said Ms Hall.

‘Dad told me that although Neil was very private, he had said he was always interested in what went on behind our galaxy in space.

‘I think Neil Armstrong was as intrigued as my father that a lost civilisation placed this treasure in the cave.

‘To access this mystical landscape was another frontier in scientific exploration.’

For Ms Hall, her father’s quest has been a lifelong fascination. With a new documentary on the expedition set to be released early next year, she is planning to try to complete his mission.

Ms Hall said she was still curious to understand why Armstrong agreed to take part.

She said: ‘There are a lot of unanswered questions and I would love to make contact with the remaining Armstrong family to see if they can help with my understanding of what made Neil embark on the trip.

‘I have the original letter my dad sent him and some contact information.’

BUT she will have to carry out her own search for the elusive relics without the main protagonists from the earlier expedition by her side to give advice.

Neil Armstrong passed away in 2012, and Ms Hall’s father died in 2008 while still working to have the cave region recognised as a World Heritage Site.

Describing her recent visit to the jungle for the documentary she said: ‘It was absolutely incredible and I will be going back next year. I can see why Neil Armstrong said the expedition was as great as the Moon.

‘It was really quite dangerous and scary being out there. Some of the film crew I was with recently ended up in hospital with viruses.

‘They pushed themselves too much. We did not sleep much. It must have been much the same for participants of my father’s trip. The guy who organised my expedition is now mapping the caves in 3D and is also trying to have them recognised as a Unesco World Heritage Site.’

But what of the mystery that lies at the heart of the quest – is there really evidence of alien life in the caves?

‘I believe the treasure cave exists,’ said Ms Hall. ‘And I intend to do all I can to realise my father’s dream of finding it.’