Exploring Chesterfield – the ‘Pisa’ of England

Pisa? We’ve got our own wonky spire: Chesterfield is a charming English town with one of the most intriguing churches in the land

By Neil Clark For The Daily Mail

Locals in Chesterfield still have time to tell you that your shoelaces are undone. Women are in the habit of addressing you as ‘love’ and ‘duck’.

And in the busy library cafe, you get old-style table service and free classical music concerts on Saturdays.

Yet, most of us whizz past the large blue signs on the M1 saying ‘Chesterfield’ without ever thinking of veering off to explore this fascinating town.

Old twist: Chesterfield’s landmark church spire, which has been described as ‘the most famous architectural distortion north of Pisa’

Writing to a friend, Lord Byron commented: ‘I can assure you there are things in Derbyshire as noble as Greece or Switzerland.’ Chesterfield might well have been one of them.

The centre-piece is the 14th century Church of St Mary and All Saints, with its wonderfully surreal 228 ft-high crooked spire. It has been described as ‘the most famous architectural distortion north of Pisa’.

Legend says the spire became crooked when a beautiful maiden entered the church and the spire bowed in admiration, but couldn’t straighten up again. Modern engineers put it down to poor construction.

While the charm of many other towns in England has been lost, Chesterfield’s historic centre remains largely intact. I had never seen such a large open-air market in Britain, with stalls selling everything from watch-straps to fascinating old books.

Architecturally, there’s much to admire. Like Chester, it has many black-and-white mock-Tudor buildings, the ones in Knifesmithgate are particularly striking.

The Grade II-listed Town Hall, on Rose Hill, is magnificent. Opened in 1938 at a cost of £142,500, it’s arguably the most palatial municipal building you’ll see anywhere in the country. 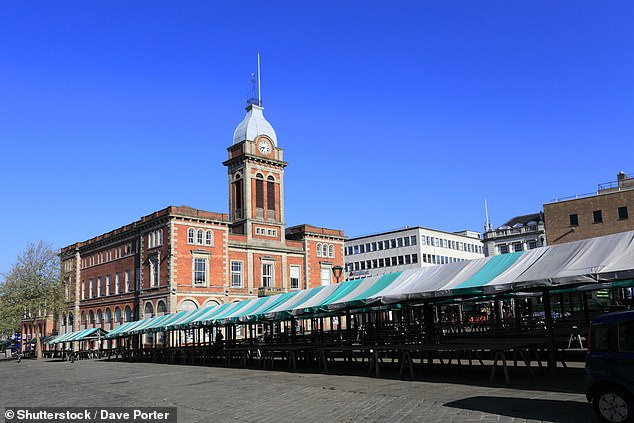 Chesterfield also has a large open-air market, with stalls selling everything from watch-straps to fascinating old books

In the town’s excellent free museum on Corporation Street, we learn how Chesterfield has played a pivotal role in Britain’s industrial development, being at various times a centre for tanning, textiles, iron founding, engineering and coal mining.

George Stephenson, the ‘father of the railways’, features prominently. He worked on the Derby-to-Leeds line and then stayed around to set up a colliery. He is buried in the Holy Trinity Church.

A room upstairs in the museum is devoted to telling the story of Chesterfield’s proud theatrical tradition. Many celebrated thespians learnt their craft at the Civic, including Dame Diana Rigg, who dedicated a signed photo ‘to the first theatre I ever worked in’.

The town was also the home of the man described by American film director David Lynch as ‘simply the greatest actor in the world’, namely the late Sir John Hurt, whose father was a local clergyman. Then, of course, there is its former MP, the indefatigable, pipe-puffing socialist Tony Benn, who became a much-loved figure.

Another famous name is Gordon Banks, England’s goalkeeper in the 1966 World Cup winning team, who died last month. Chesterfield was his first club.

We stay overnight at the Olde House, a comfortable 17th-century hotel, pub and restaurant. The nearby Nags Head is a real ale-serving local with a great atmosphere, where people of all ages mingle happily. Live music comes from silver-haired Mitch Mitchell, who sings Fifties and Sixties hits.

Chesterfield is an ideal base for other attractions. An 11-mile drive along the A632 brings you to the foot of the Heights of Abraham, where we take a ride on Britain’s first Alpine-style cable car system. At the summit, there are superb views of the Derwent Valley. Next time you’re on the M1, turn off at junction 29. You won’t regret it.