Arriving by car in Deauville, I do what the British do best when confronted with the seaside.

First, a picnic on a bench — packet of crisps and a roll — followed by an attempt to fly a kite shaped like a giant shark, which ends in near disaster when my youngest daughter dive-bombs a chihuahua sporting a silk-lined corduroy jacket.

They do things differently on this stretch of the Normandy coast. Same sea and sand as across the Channel, but less salt and vinegar and more sophistication. Given its history, that’s hardly surprising.

The resort of Deauville and neighbouring Trouville were built 150 years ago by the Duc de Morny, half-brother of Napoleon III, as a playground for posh Parisians — and they have never looked back.

Just two hours by train from the capital, they have all the amusements stylish visitors might demand — a couple of racecourses, a casino, and streets lined with designer outlets.

Coco Chanel opened her first fashion boutique here in the summer of 1913, and the range of labels on offer has my wife furtively texting friends back home to arrange a future visit. I’m not expecting an invite.

Then, of course, there’s the beach. Sandy and stretching almost a mile, it is lined by the Promenade des Planches boardwalk with its row of bathing cabins. Each is named after a Hollywood star — everyone from Al Pacino to Nicole Kidman — who have attended the American Film Festival, held every September.

When we visit, there’s only a handful of hardy tourists taking the sea air. Which is just as well, given the near-fatal crash-landing of the kite.

But in summer the town’s population of 4,000 increases eight-fold. Those hoping to escape the hustle and bustle would do well to follow our footsteps and head inland five miles where Les Manoirs de Tourgeville sits in a secluded rural setting.

This four-star hotel comprises a huge, half-timbered main building formed into a cloister-like square. At one end is a bar and living room, huge stone fireplace roaring away, and at the other, the pool, gym and spa. 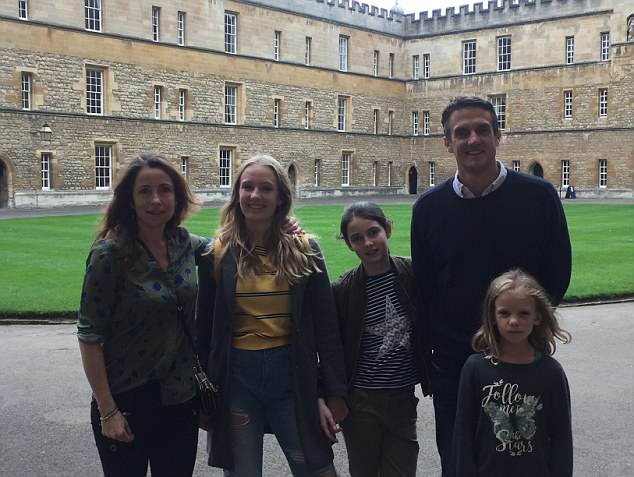 All smiles: Tom pictured above with his family on their French seaside holiday

The remaining sides house some of the 57 rooms, the rest in four manoirs dotted around the grounds.

Despite its old-world look and feel, the hotel’s history is relatively short. It was built in the Seventies by Claude Lelouch, a legendary French film-maker.He made more than 40 movies. One critic greeted his first film with the words: ‘Claude Lelouch — remember this name, for you will never hear it again.’

Nonetheless, he left his mark on the place — in the basement there’s a 40-seat cinema that guests can book and use whenever they want, bringing along their own DVDs.

Two of my daughters, aged 12 and seven, opt for the hit musical La La Land, and as the opening sequence unfolds on the giant screen, they are out of their seats and dancing in the aisles. It seems rude not to join them. If nothing else, it might free up some extra space for the following morning’s petit dejeuner.

Heading to the hotel’s dining room we are confronted with a near A to Z of French baking craft — everything from sticky, glazed almond croissants to bouncy brioches, sugar-dusted chouquettes, shell-shaped madeleines and religieuses plump with creme patisserie.

Given its location in the heart of Normandy, a region famed for its cream, butter and milk, that is only to be expected.

The previous evening we had sampled the other local speciality — seafood — as we dined in the hotel’s Restaurant Le 1899. But while my wife and I tucked in to scallops and sole meuniere, my seven-year-old insisted on ordering a plate of frites as a starter. You can take the girl out of England, as they say, but . . .