Extinction Rebellion protesters have been accused of ‘attacking the free press’ after they blocked roads outside national newspaper printing presses in a bid to stop titles reaching shops on Saturday.

More than a hundred ‘demonstrators’ chained themselves to gates and each other, and parked vehicles in the road outside Newsprinters printing works in Broxbourne, Hertfordshire, and blocked access to presses in Knowsley, near Liverpool, last night.

The company said printing was transferred to other sites but delays could occur in some deliveries of The Sun, The Times, the Daily Mail, the Daily Telegraph and the Financial Times.

Delivery lorries had not left the Broxbourne site as of 6am, Hertfordshire police said. As many as 13 arrests have been made by the force, with more expected. 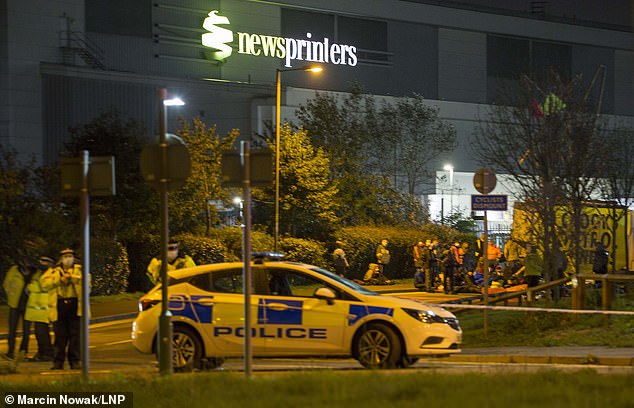 Printing was moved to other sites but the protests could lead to delays in deliveries of The Sun, The Times, the Daily Mail, the Daily Telegraph and the Financial Times. (Pictured: Boxbourne) 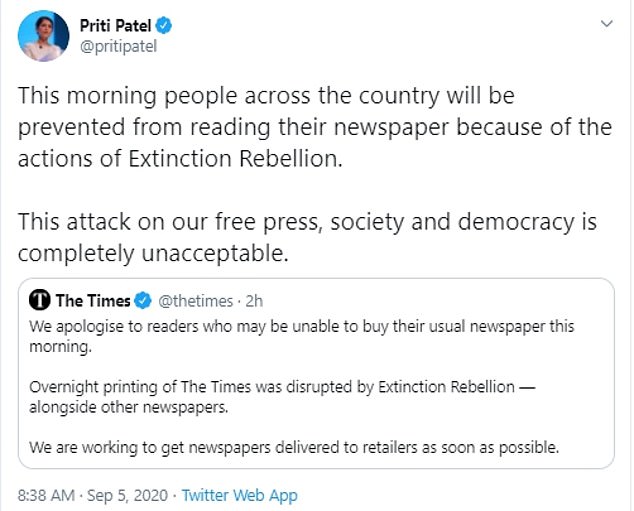 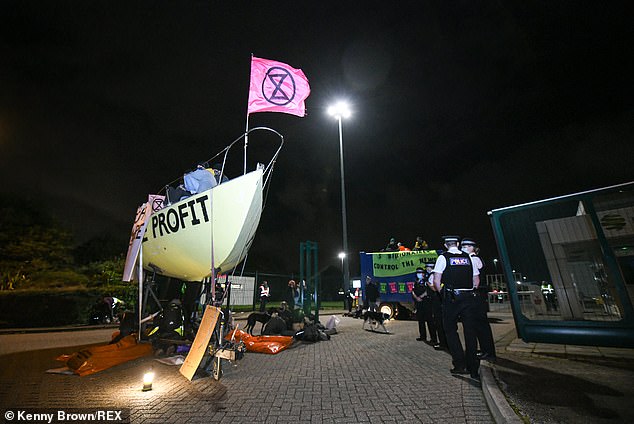 Newsprinters has condemned the demonstration as an ‘attack on the free press’. (Pictured: Protesters blockading access to the printing presses in Knowsley)

Newsprinters condemned the protests as an ‘attack on all of the free press’ which had affected workers going about their jobs and others such as newsagents who face ‘financial penalty’.

‘This attack on all of the free press impacted many workers going about their jobs,’ they said.

‘Overnight print workers, delivery drivers, wholesale workers and retail newsagents have faced delays and financial penalty. This is a matter for the police and the Home Office.

‘Thanks to other industry partners, printing was transferred to other sites.

‘We apologise sincerely to any readers of The Sun, The Times, the Daily Mail, the Daily Telegraph and the Financial Times who may be unable to buy their usual newspaper this morning due to late deliveries.’

Hertfordshire Police said they were called to Great Eastern Road outside the Broxbourne plant at around 10pm where they found around a hundred protesters who had ‘secured themselves to structures and one another’. 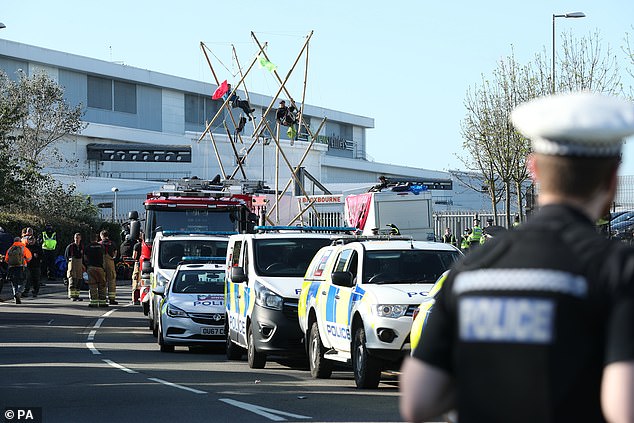 The protesters remained in place outside the Newsprinters in Broxbourne, Hertfordshire, this morning. They were seen hanging from bamboo structures 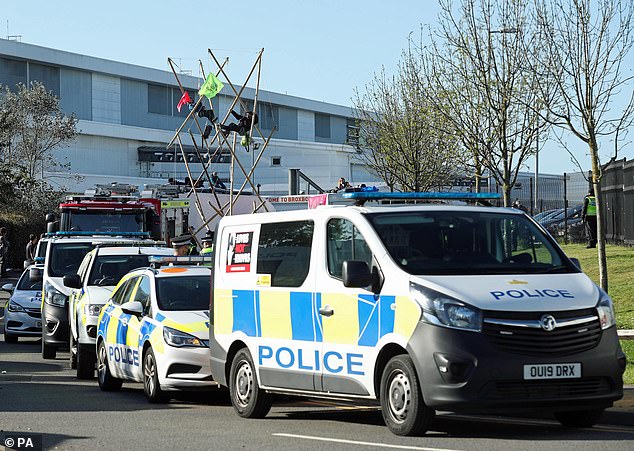 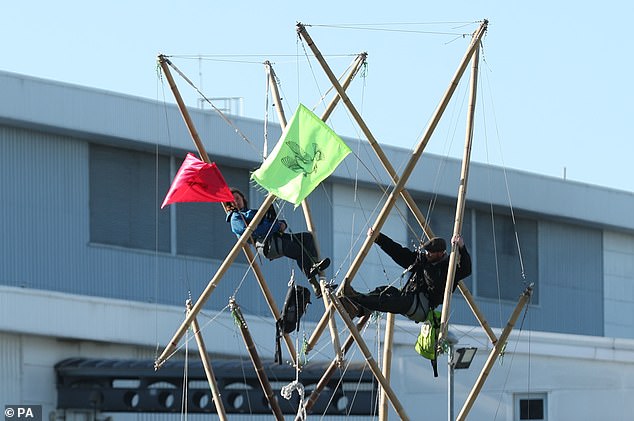 Due to their actions, deliveries of several national newspapers were delayed this morning

Assistant chief constable Owen Weatherill said in a statement officers were working to facilitate ‘the rights of both the protesters and those affected by their presence’ but that the ‘protesters’ were not co-operating.

‘The rights to protest are well established in this country and we remain committed to facilitating peaceful protest and ensuring compliance,’ he said in a statement.

‘However, at this time, the group are not engaging with us and the protest is causing major disruption to local businesses.

‘I’d like to reassure you that we are doing all we can to bring the incident to a peaceful conclusion, ensuring minimum disruption to the affected businesses.’

Merseyside police tweeted on Saturday morning that officers were still in attendance at the Knowsley plant.

Extinction Rebellion (XR) claimed last night that it was using the disruption to ‘expose’ newspapers ‘failure to report on the climate and ecological emergency’.

They alleged: ‘Coverage in many of the newspapers printed here is polluting national debate on climate change, immigration policy, the rights and treatment of minority groups, and on dozens of other issues.’ 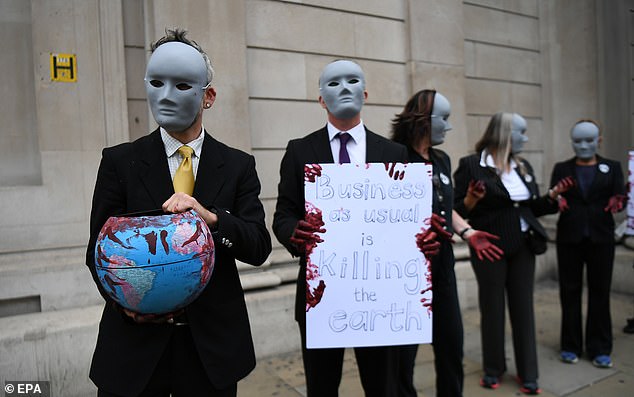 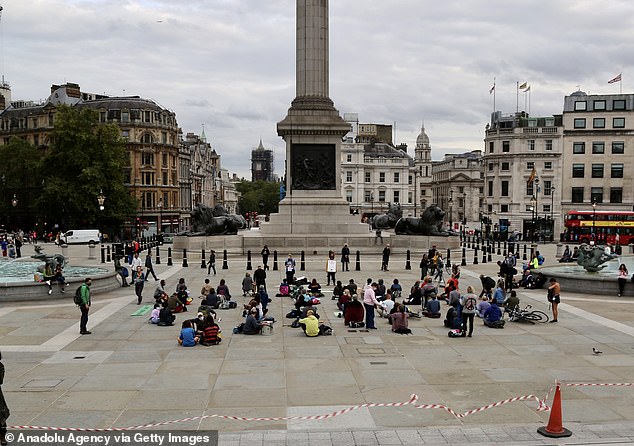 Meanwhile, climate change protesters have been warned they risk a large fine if they fail to comply with coronavirus rules banning gatherings of more than 30 people.

The Met Police said risk assessments explaining how XR activists were minimising the possibility of Covid-19 transmission at a planned march in Westminster “did not meet the required standard”.

The force said XR’s latest round of demonstrations “pose a risk, not only to those involved, but to the wider public and communities of London”.

On Saturday a procession of activists that set of from Brighton on foot a week ago is due to march the final stretch to Parliament.

They have been banned from taking a 20ft model boat named after teenage activist Greta Thunberg to the streets of Westminster.

On Friday Met Police Assistant Commissioner Louisa Rolfe warned the group not to take The Lightship Greta into an area stretching from Green Park to Lambeth.