F-35s become so unpredictable at top speeds that pilots fear they would be unusable in dogfights, new documents reveal

F-35 fighter jets used by the US Navy and Marine forces are so unpredictable at top speeds that pilots fear they would be unusable in dogfights, new documents reveal.

Pilots have reported erratic handling when approaching max performance including unpredictable changes in pitch and rolling motions — both of which are considered a ‘category 1 deficiency’, the most serious type of deficiency.

According to the report, aviators said the issue would ‘prevent repeatable air-to-air combat techniques resulting in mid-air collisions during training,’ as well as ‘aircraft loss during combat engagements with adversary aircraft and missiles.’

The $100million-apiece-jets, considered the most advanced military aircraft’s ever designed, have been plagued with issues since their roll out but the documents obtained by Defense News has shed new light on the true extent of the problems.

F-35 fighter jets used by the US Navy and Marine forces are so unpredictable at top speeds that pilots fear they would be unusable in dogfights, new documents reveal (An F-35C Lightning II test aircraft approaches for a landing aboard the nuclear powered aircraft carrier USS Dwight D. Eisenhower)

Documents reveal that a version used by Marines and a Navy’s carrier-launched version become so difficult to control when the aircraft is operating above a 20-degree angle of attack — crucial in dogfights when pilots must dodge incoming missile strikes — that they would be ineffective when needed most.

Such is the scale of the problem that the damning report defines it as something that limits the aircraft’s performance to such an extent that it cannot accomplish its ‘primary or alternate mission(s).’

According to Defense News, Lockheed Martin, the aerospace and defense company behind the F-35, defended the aircraft and said the issues would be ‘resolved or downgraded soon as a result of software fixes.’

‘We’ve implemented an update to the flight control system that is planned for integration in the third quarter of this year — and we expect this item to be resolved or downgraded,’ said Lockheed Martin vice president Greg Ulmer.

Despite this, a retired Navy fighter pilot who reviewed the documents blasted the F-35’s failure to maneuver at high speeds, adding: ‘You’re telling me that the latest, greatest, $100 million aircraft can’t perform?’ 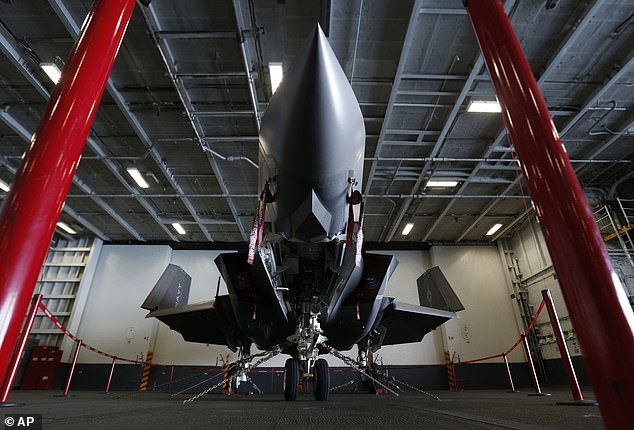 The handling issue compounds the previously documented issue the jets suffer in that at extremely high altitudes, the Navy and Marine Corps version can only fly at supersonic speeds for short bursts of time without risking structural damage to the aircraft.

In a statement addressing the problems listed in the report, Ulmer, the Lockheed executive, defended the performance of the jet and said they are already ‘meeting or exceeding performance specifications and delivering unprecedented capability.

Adding: ‘These issues are important to address, and each is well understood, resolved or on a path to resolution,’ Ulmer said.

‘We’ve worked collaboratively with our customers and we are fully confident in the F-35’s performance and the solutions in place to address each of the items identified.’