A new report finds that dozens of climate disinformation ads have run on Facebook in the first half of 2020.

Produced by a variety of conservative groups, ads have received a total of 8 million views.

The report, produced by the climate group InfluenceMap, accuses climate-denialist groups of using Facebook’s advertising platform to spread disinformation, ‘intentionally seeding doubt and confusion around the science of climate change.’

The ads were predominantly targeted at men, people in rural states and Americans over the age of 55.

Most raised doubts about the science of climate change, including denying there’s consensus or certainty about it, and attacked the credibility of climate experts.

Launched by Dylan Tanner on the eve of the Paris climate accords in 2015, InfluenceMap analyzes how corporations influence climate change opinion and policy.

The spots cost a total of $42,000 to run and received a total of 8 million impressions, though it’s not clear how many people saw them in total.

InfluenceMap says that while the ads were produced by a variety of right-wing groups – such as Prager University, Turning Point USA, and the Mackinac Center for Public Policy – the ultimate source of funding ‘is often opaque.’ 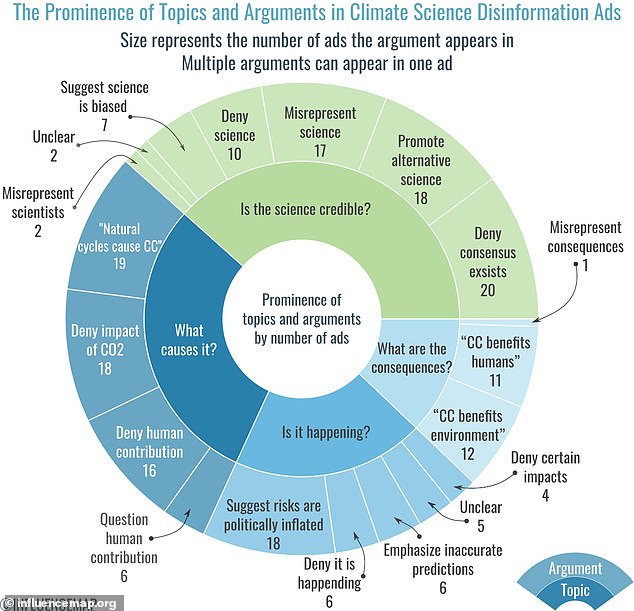 InfluenceMap chart breaking down strategies used by climate-denialist ads. The spots cost a total of $42,000 to run and received a total of 8 million impressions, though it’s not clear how many people saw them in all

Prager University, for example, received early funding from Dan and Farris Wilks, who became billionaires in the fracking industry.

To date, only one ad was removed by Facebook before it was scheduled to end.

The group lists several strategies the ads use to ‘sow doubt and confusion’ around the science of climate change, including denying there’s consensus or certainty on climate change. 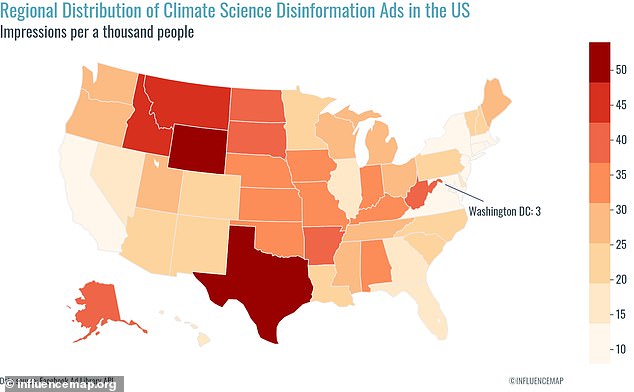 A map indicating where the climate denial ads ran. The spots were predominantly aimed at men, people in rural states, and Americans over the age of 55.

InfluenceMap’s research also suggests that the advertisers micro-targeting their messaging to specific audiences.

In ads shown predominantly to 18-34 year-olds, the videos mostly focused on contesting the future consequences of climate change.

In those shown to people 55 and up, though, the focus was on debating the causes of climate change.

One ad from Prager University featured Alex Epstein, author of The Moral Case for Fossil Fuels, slamming the Green New Deal and disputing the environmental consequences to increasing greenhouse gases.

‘Apparently ‘disinformation’ means anything Facebook or the left disagrees with,’ he told The Guardian. ‘The ad in question is an educational video on the truth about the Green New Deal.’

Despite its name it’s not an accredited academic institution and doesn’t offer diplomas.

In August 2018, Prager accused Facebook of censorship for briefly taking down two climate denialist videos and criticized YouTube for adding fact-checks to its videos on climate change.

Another spot InfluenceMap flagged was paid for by pro-Trump college group Turning Point USA and ran the week of Earth Day.

Under a banner that reads ‘Climate change panic is not based on facts,’ the clip features Turning Point founder Charlie Kirk challenging an audience member who supported climate science and suggesting sunspots impact climate change.

A January 2020 survey conducted by Edelman found that almost 70 percent of Americans believe advertisers should stop any dealings with platforms that share ‘misleading information.’

‘We have repeatedly asked Facebook to close the loopholes that allow misinformation to run rampant on its platform, but its leadership would rather make a quick buck while our planet burns, sea levels rise, and communities – disproportionately Black and brown – suffer,’ Warren said. ‘Facebook must be held accountable for its role in the climate crisis.’

In a letter to Warren, Kevin Martin, Facebook Vice President for U.S. Public Policy, said that clear opinion is not subject to fact-checking on Facebook but it does flag ‘content based on underlying false information as opinion – even in the form of an op-ed or editorial.’

Martin cited several instances where Facebook had taken down climate denialist content, including a claim that human activities have not increased CO2 levels and a meme with a doctored Time magazine cover intending to raise doubt on climate change.

He did not indicate if those examples were ads or organic posts.

Bill Weihl, Facebook’s former director of sustainability, said it was crucial to call out climate misinformation on Facebook because the platform’s ‘limited attempts’ to address the problem are failing to keep up with denialists’ tactics.

‘It’s yet another attempt by Facebook to say ‘we’re doing some good,’ when the problem continues, mostly unabated.’