Facebook could be fined £1billion under new data laws

The Culture Secretary said the measure was at the heart of a package of reforms that would help Britain lead the world in setting the terms on how social media giants operate.

Mr Hancock set out plans today to end the ‘Wild West’ of the internet in which the biggest social media firms set the rules on how they collect and use private data.

But speaking at a Westminster lunch, Mr Hancock refused to say whether he would keep his own Facebook account after revelations user data was misused by Cambridge Analytica as part of political campaigns.

He admitted to understanding why people had lost ‘trust’ in Facebook and were deleting accounts. He said Government reforms meant users soon be able to transfer data ‘wholesale’ to a different social network. 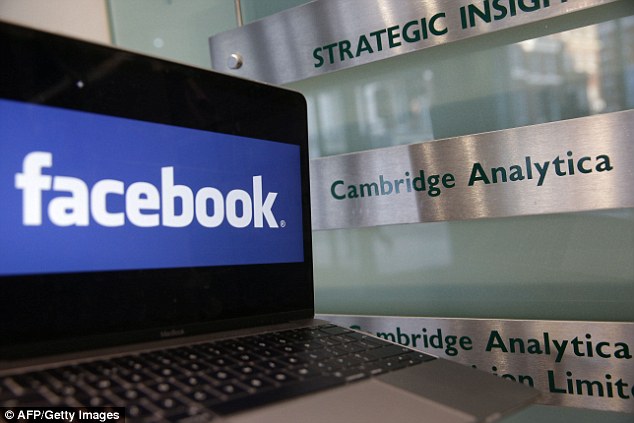 Outlining new measures to set rules on how social media firms use data, he said: ‘We have a real chance to be the place that sets the rules for how the internet works.

‘The new powers in the Data Protection Bill mean the Information Commissioner can fine up to 4 per cent if platforms don’t play by the rules.

‘This means Facebook, if it breaks the rules, could face fines of up to £1.1billion from May.

‘The Bill also means people will have the right to move all their data wholesale from one social network to another.

‘From May if people lose trust in a social media platform they can move to another one at the click of a button. This will concentrate minds.

‘After this week’s revelations, it is time social media platforms to come clean with what data they really hold on people.’ 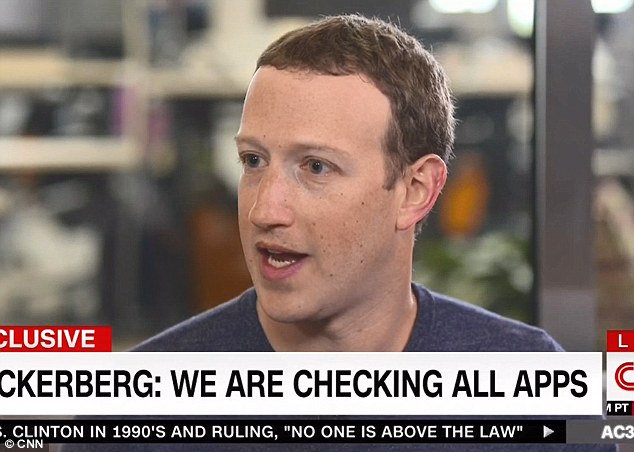 CEO Mark Zuckerberg (pictured on CNN last night) has admitted Facebook ‘made mistakes’ leading up to the Cambridge Analytica privacy breach, which has led to accusations the firm mismanaged user dat

Mr Hancock was challenged to say whether he would take advantage of the powers and close his own Facebook account.

But he refused to answer directly – instead promoting his own much-mocked ‘Matt Hancock App’ as a ‘pleasant place to be’.

CA’s use of Facebook data branded a ‘grossly unethical experiment’ by social media giant who said their policies had been breached;

March 19 – US markets open and Facebook shares plunge over its handling of personal data.

Facebook also hires its own forensics team to investigate Cambridge Analytica and they start searching CA’s offices in London.

But CA refuse to allow Britain’s Information Commissioner’s team in and force her to go to court for a warrant.

But Mark Zuckerberg fails to show up and is yet to speak about the crisis that has seen billions wiped off the value of his company.

The billionaire is also asked to appear before Parliament to answer allegations his company has lied about how it handles data.

March 21 – Architect of app that helped harvest data for Cambridge Analytica says tens of thousands of other apps might be doing the same job.

‘Without trust people will understandably continue to remove their Facebook accounts. Without transparency over how data is used, there can be no trust.’

Asked if the government will continue to advertise with Facebook given the recent revelations, the Prime Minister’s spokesman said: ‘The Prime Minister has expressed concerns.

‘Clearly, Facebook advertising is something we would keep under constant review.’

He added: ‘We know the advertising body ISBA is talking to Facebook and we would want to hear their views before considering any further action.’

CEO Mark Zuckerberg has admitted Facebook ‘made mistakes’ leading up to the  Cambridge Analytica privacy breach, which has led to accusations the firm mismanaged user data.

The billionaire, 33, also announced a crackdown on apps used to hijack details from users after the Cambridge Analytica scandal slashed the social network’s value by $50billion (£35m) and his own fortune by $5billion (£3.5m).

Speaking for the first time last night, five days after the data breach emerged, he said: ‘This was a major breach of trust and I’m really sorry that this happened. Our responsibility now is to make sure this doesn’t happen again’.

And in a contrite message to victims and those planning to delete their profiles he said: ‘We have a responsibility to protect your data, and if we can’t then we don’t deserve to serve you’.

He added: ‘We need to make sure there are no other Cambridge Analyticas out there’.

Facebook’s revenues soared to billions of pounds after it started giving away users’ details, it emerged today.

Facebook users were yesterday waking up to how much private information has been handed out. During the data gold-rush – which lasted from 2009 to 2015 – it appears almost anyone who described themselves as a ‘developer’ could freely mine Facebook’s database.