Facebook map shows where EVERY human on the planet lives

Facebook has created a map showing where every single person on the planet lives, it has been revealed.

The internet giant hopes the map will help it to offer internet access to more people by creating an ‘internet in the sky’.

The mapping technology, which Facebook says it developed itself, can pinpoint any man-made structures in any country on Earth to a resolution of 15 feet.

The Facebook map, which has not been publicly released, can pinpoint any man-made structures in any country on Earth to a resolution of 15 feet.

The map was built by combining government census numbers with information obtained from space satellites.

The data is used ‘to know the population distribution’ of Earth to figure out ‘the best connectivity technologies’ in different locales,’ Janna Lewis, Facebook’s head of strategic innovation partnerships and sourcing told the Space Technology and Investment Forum in San Francisco.

‘We see these as a viable option for serving these populations’ that are ‘unconnected or under-connected,’ she said.

Mark Zuckerberg’s firm is developing several types of technology to deliver internet access, from its drones to satellites, and hopes the map will help it choose which system is beat for each area.

‘Satellites are exciting for us,’ Lewis said.

‘Our data showed the best way to connect cities is an internet in the sky,’ Lewis told the conference, according to CNBC.

‘We’re trying to connect people from the stratosphere and from space,’ using high-altitude drone aircraft and satellites, to supplement Earth-based networks.’

Facebook has previously said it was developing the maps using AI, and ‘applying techniques from computer vision on DigitalGlobe high-resolution satellite imagery.

‘We identified human-built structures, such as buildings or other infrastructure, and used those locations as a proxy for where people live.

‘We then combined our results with existing census counts and created a population data set with 5-meter resolution for 20 countries.

‘While recognizing structures in aerial imagery is a popular task in computer vision, scaling it to a global level came with additional difficulty.

A DigitalGlobe satellite image of Naivasha, Kenya (left) and results of the Facebook analysis of the same area (right).

‘Aside from processing billions of images, finding buildings with high fidelity in rural areas is really a needle-in-a-haystack problem: Typically, more than 99 percent of the landmass we analyze does not contain any human-made structure, and it therefore poses a challenge for the machine learning algorithms to learn from such an unbalanced data set.’

‘We analyzed 20 countries, which amounts to 21.6 million square kilometers and 350 TB of imagery.

‘For one pass of our analysis we processed 14.6 billion images with our convolutional neural nets, typically running on thousands of servers simultaneously.

‘Our final data set has a spatial resolution of 5 meters and thereby improves over previous countrywide data sets by multiple orders of magnitude.’

Facebook has already conducted several tests of its gigantic Aquila drone, which has the wingspan of a 737 – but can run on the power of three hairdryers.

FACEBOOK’S PLAN TO BEAM THE NET FROM SPACE

Facebook aims to use a mix of solar-powered aircraft and low-orbit satellites to beam signals carrying the internet to hard-to-reach locations.

They are relatively cheap and will be most effective for suburban areas that do not have the cables or infrastructure to carry internet or telephone signals. 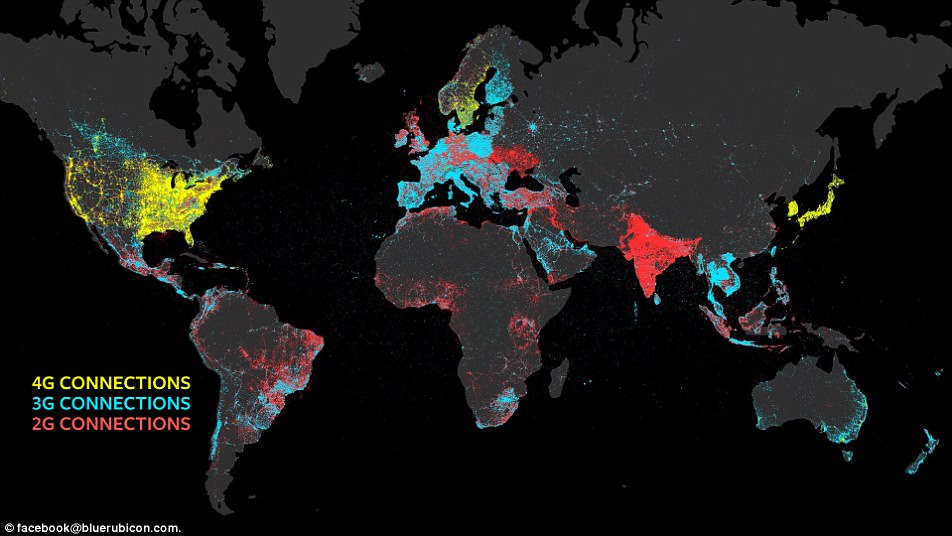 An infographic shows the areas not covered by mobile network coverage

The drones are effectively mobile phone masts in the sky and bounce smartphone communications between satellites and base stations on Earth.

Low-orbit and geosynchronous satellites, which have orbits that match the Earth’s rotation and are effectively stationary, will cover more remote areas in Africa and Asia.

The internet access would be transmitted in the form of free-space optical communication, or FSO, which transmits data using infrared laser beams. 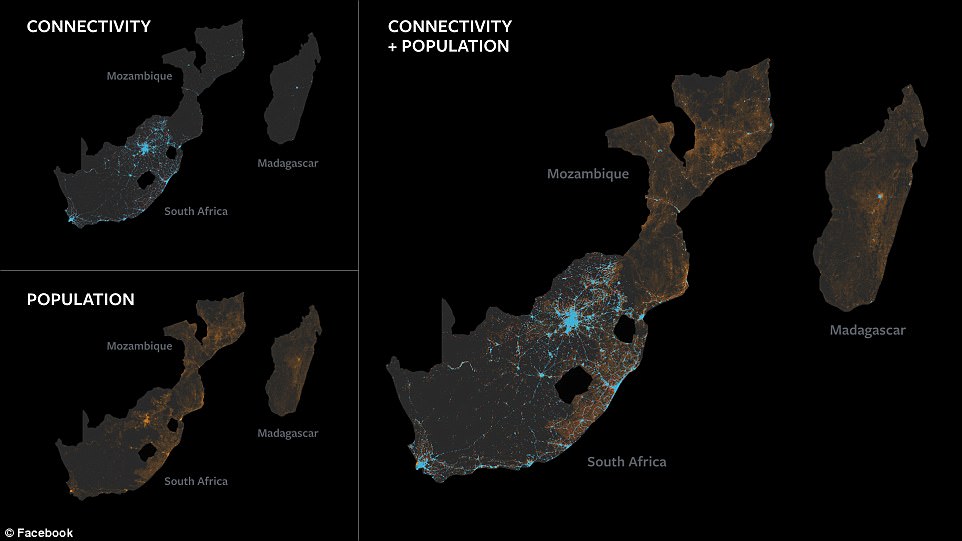 An infographic shows the connectivity and population of Mozambique, South Africa and Madargascar

The revolutionary craft has completed its second test flight as Facebook works on its plan to use to beam the internet to people in remote areas with no mobile network coverage.

However, while the craft aced its flight, the landing left a little to be desired as the craft damaged its propellers.

‘A few seconds before landing, the autopilot stopped the propellers as planned in order to lock them horizontally,’ Facebook’s Martin Luis Gomez said.

‘The propellers are meant to lock in the horizontal position to avoid damaging them when touching down.

‘In this flight, the motors all stopped, but only one propeller locked horizontally.’

In the footage of the flight, the propellors can be seen hitting the ground.

However, Facebook glossed over the problem, with Gomez saying ‘The aircraft settled onto the landing surface very gently and came to a stop in about 10 meters. It was absolutely perfect.

‘Similar to driving a car on a gravel surface, landing a plane on gravel causes a few minor, easily-repairable dings, but otherwise, Aquila landed in great shape. ‘

Earlier this year an unmanned SpaceX rocket was due to launch on with Facebook’s first communications satellite.

Facebook’s Amos-6 satellite would have widened Internet access across Africa including 14 countries.

However, it exploded on the launch pad.

Zuckerberg wrote about the devastating explosion on his Facebook page.

‘As I’m here in Africa, I’m deeply disappointed to hear that SpaceX’s launch failure destroyed our satellite that would have provided connectivity to so many entrepreneurs and everyone else across the continent,’ Zuckerberg wrote.

‘Fortunately, we have developed other technologies like Aquila that will connect people as well.

‘We remain committed to our mission of connecting everyone, and we will keep working until everyone has the opportunities this satellite would have provided.’

The plan was to use the Amos-6 satellite from Israeli company Spacecom, to beam internet connections directly to smartphones in Southern, West and East Africa.

Roughly 14 countries would have received the service in the most populated areas of sub-Saharan Africa.

‘A quick poll of the pilots and engineers resulted in a ‘go for launch’ call,’ said Gomez.

‘Takeoff was normal. It also quickly became apparent that all the systems were functioning normally: The motor current, the airspeed tracking, the heading tracking, the radio links, and the differential GPS all showed nominal behavior.

‘The only surprise was a happy one: The climb rate – at 180 ft/min – was nearly twice as fast as on our first flight. We attribute this to the numerous refinements to Aquila — especially a smoother finish — that were based on learnings from our first flight.’

‘The craft climbed to 3,000 feet, and with all telemetry ‘in the green,’ continued the climb.

Facebook added hundreds of sensors to the aircraft to understand how Aquila’s shape responds to flight in real-time for the flight, including hundreds of strain gauges and three-axis inertial measurement units (IMUs.)

The Aquila aircraft has no landing gear in the traditional sense, but instead lands on Kevlar pads bonded to the bottom of the motor pods.

‘For the landing pad, we created a 500 foot circle of level gravel, about 6 inches deep and with the consistency of rough sand.

‘Similar to driving a car on a gravel surface, landing a plane on gravel causes a few minor, easily-repairable dings, but otherwise, Aquila landed in great shape.’ 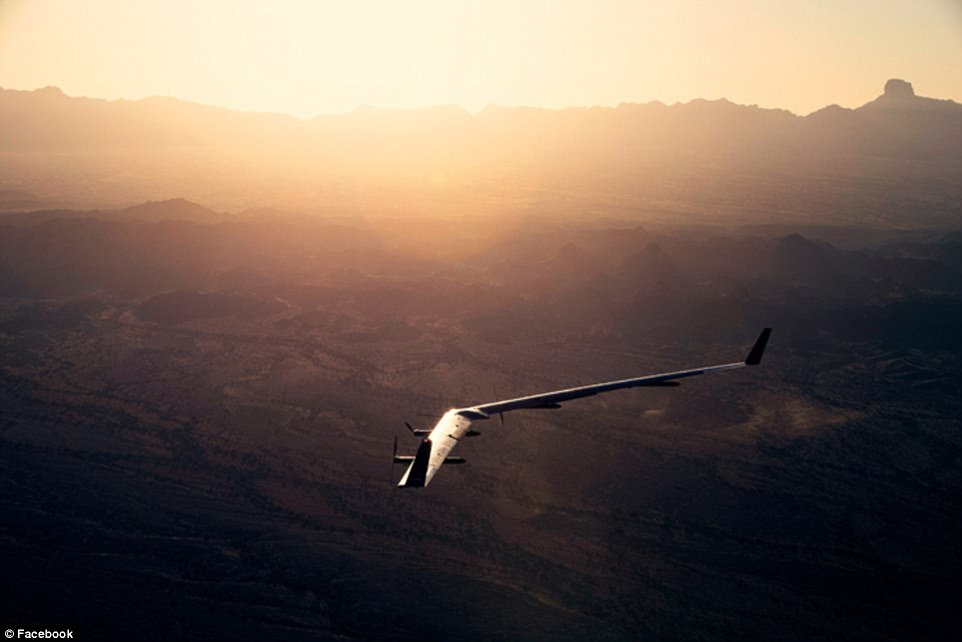 The revolutionary craft has completed its second test flight as Facebook works on its plan to use to beam the internet to people in remote areas with no mobile network coverage.

‘Needless to say, the entire team was thrilled with these results.

‘In the coming months, we’re excited to take the lessons from our successful second flight to continue the Aquila program’s progress to help bring the world closer together through connectivity.’

During its first test flight Aquila remained in the air for 96 minutes, more than triple the planned mission time.

While in the air, the eco-friendly plane was consuming just 2,000 watts of power – around the same as a hairdryer.

Eventually the plane will consume around 5,000 Watts once its reaches it cruising height and speed.

‘If you told me when I was getting started with Facebook that one day we would build planes, I would’ve told you that you were crazy,’ Mark Zuckerberg told The Verge.

‘We’re not a plane company, but within a little more than two years of having this idea and starting to build the team, we now have a plane which has flown for an hour and a half. [It’s] just a really big milestone on this path to connecting everyone.’