Two Facebook-branded smart speakers could be hitting the shelves as soon as July.

The devices, codenamed Aloha and Fiona, will be outfitted with 15-inch touchscreens and aimed at helping family and friends stay in touch, DigiTimes reported, citing sources close to the situation.

Facebook’s smart speakers are expected to arrive in mid-2018 or by July at the latest.

Both devices will have touchscreens made by LG, but Aloha will be ‘more sophisticated’ than Fiona, DigiTimes noted.

Facebook CEO Mark Zuckerberg (pictured) has been rumored to be interested in entering the consumer home devices market. Now it appears the firm could release two speakers in July

Aloha is the nickname for the device that will ultimately be marketed as ‘Portal’ — a name that’s been previously reported — and will use voice commands, as well as other advanced features like facial recognition.

The facial recognition technology would be housed in a wide-angle lens on the front of the device that’s capable of identifying users to instantly log them into Facebook.

The Portal device will be equipped with added social media functions and Facebook has signed deals with Sony and Universal Music to ‘enrich the device’s applications,’ DigiTimes added.

It’s been rumored for several months that the social media giant has been designing some kind of video chatting or smart speaker device.

Previous reports indicated that the Portal device would feature a laptop-sized touchscreen and smart camera technology boosted by artificial intelligence.

The devices have been speculated to cost an upwards of $499 (£370), making them much pricier than similar products currently on the market, such as Amazon’s $39 (£27) Echo Dot.

Facebook is reportedly creating a pair of smart speakers – the ‘more sophisticated’ of which, nicknamed Aloha, will eventually be known as Facebook Portal.

The device will feature a wide-angle camera, microphone, and speakers boosted by artificial intelligence, and it will be geared for communal use in the living room.

A version in testing would enable the camera to automatically scan for faces in the room and link them to their Facebook accounts.

Like Amazon’s screen-equipped Echo Show, the device will be controlled by voice-command and designed for indoor use. 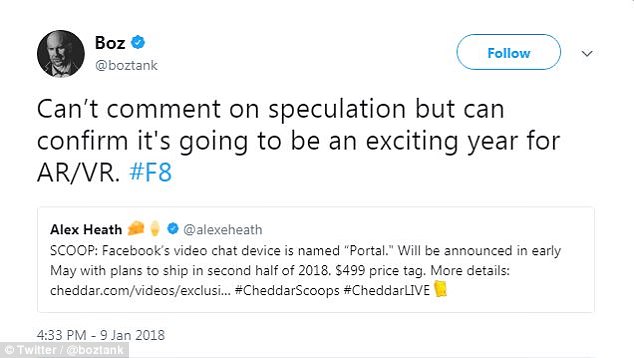 In response to the Cheddar rumours, Andrew Bosworth, Facebook’s Vice Preident of augmented and virtual reality, wrote on Twitter: ‘Can’t comment on speculation but can confirm it’s going to be an exciting year for AR/VR. #F8’

While Facebook itself has not confirmed any rumours, Andrew Bosworth, the company’s Vice President of augmented and virtual reality, wrote on Twitter: ‘Can’t comment on speculation but can confirm it’s going to be an exciting year for AR/VR. #F8’.

Facebook was initially planning to release the devices in May, but later pushed back the launch date in order to perfect their audio and software, DigiTimes said.

Portal and Fiona would be Facebook’s first consumer hardware devices and could potentially give them a foothold in the crowded smart speaker market.

That market is currently dominated by Amazon and Google, which have released several voice-activated devices over the years.

Google hasn’t released a touchscreen smart speaker, but Amazon has an early lead in that area with its screen-equipped Echo Show.

If Facebook’s Portal device truly features a 15-inch screen, it would more than double the Echo Show in size, which measures up at roughly 7 inches.

Apparently Facebook is releasing a smart speaker. I’ll bet it only plays albums out of order, and it will randomly alert you to new music you don’t care about.

Facebook may position its smart speaker devices differently than Amazon and Google, however.

Last August, Bloomberg reported that Facebook intends to create a Siri-style voice assistant that would be integrated into a smart speaker device, adding that the firm had hired several product veterans away from Apple to help develop that technology.

Since then, a report from Cheddar speculated that Facebook would instead try to position the device as a way for families and friends to stay connected through video chatting and various features. 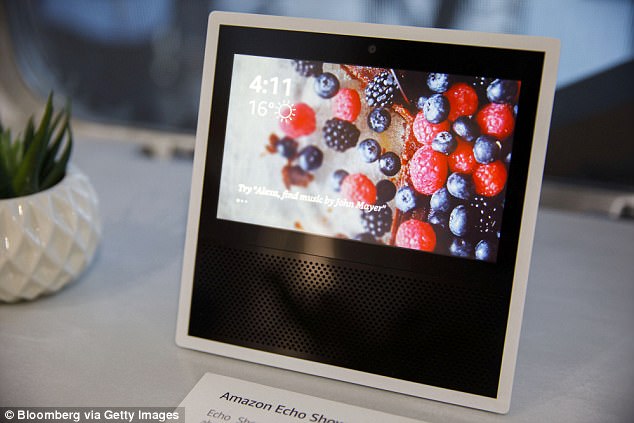 Amazon’s Echo Show (pictured) features a 7-inch screen, while Facebook’s rumored smart speakers, Portal and Fiona, could be equipped with 15-inch displays made by LG

Facebook has yet comment on any of the rumors, but Andrew Bosworth, the company’s vice president of augmented and virtual reality, recently tweeted that some exciting things could be coming at the firm’s F8 annual developer conference in May.

Sources told Bloomberg that the Portal and Fiona devices could possibly run a version of the Android operating system instead of Facebook building its own software.

Facebook would also equip the Portal with sophisticated, 360-degree cameras that can scan for people nearby and ‘lock onto them,’ the report claims.

It’s possible that this could raise privacy concerns, however.

The firm has already faced criticisms around its user tracking technologies, which it uses to serve up advertisements catered to a user’s interests, location, personal information and other data.