For now it’s being limited to a small number of users who, according to The Verge, will receive a pop-up window explaining that ‘Now your followers can choose to view your Instagram Story from Facebook.’

Users’ Stories will be color-coded by profile picture, so viewers know where they came from – Facebook Stories have blue circles, while Instagram Stories carry that app’s pink-and-orange border.

Regular Instagram posts can already be automatically posted to a user’s Facebook feed and the company has been encouraging users to cross-post Stories for some time, as well.

The new option was first reported by Twitter user @ec_wife on Friday.

‘We’re testing a new feature that gives people the option to view Stories from Instagram on Facebook, making it easier to view moments from people you care about, regardless of what app you’re using.’ 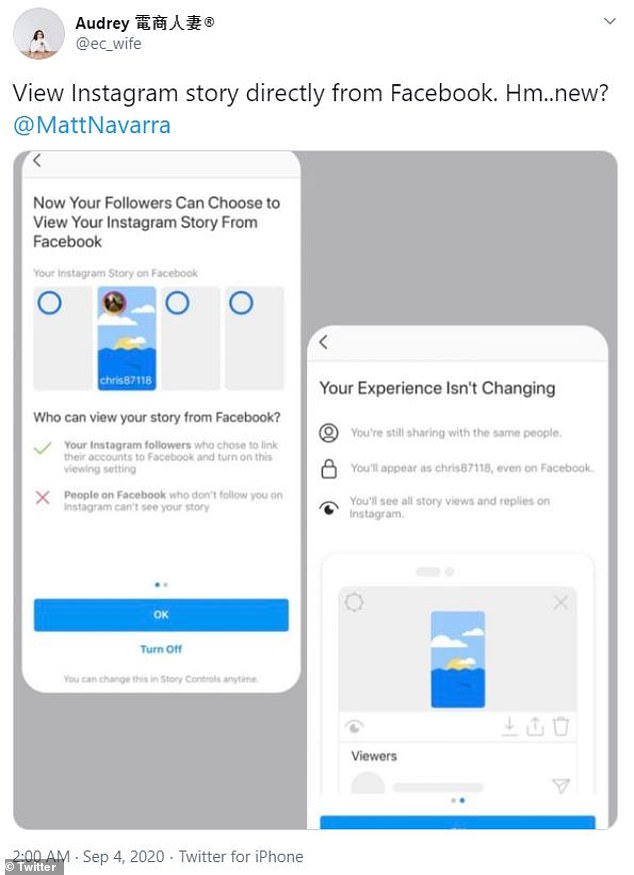 Users can tell whether they’re looking at someone’s Facebook or Instagram story based on what color border is on the profile photo: Facebook Stories have blue circles, while Instagram’s have that app’s pink/orange border.

The company said it will be listening to user feedback about the limited test before rolling the feature out on a larger scale.

Stories are a huge asset for Instagram, with half of the site’s one billion users regularly interacting with Instagram Stories.

In June, Instagram began testing a new layout that put Stories front and center on the home screen.

According to reports, the social media site was working on a ‘See All Stories’ button which would allow users to view all short-term posts at once in a grid format.

The new sharing option is just latest move in the company’s plan to integrate its platforms and dominate the social-media space.