Facebook has officially launched its Live Audio Rooms initiative – which lets users host and listen in on live audio-only discussions – a new feature that has been dubbed a Clubhouse copycat.

The Monday roll out is only available to some US-based public figures and specific groups, but any user of the social media platform can join a room.

Unlike Clubhouse, which caps attendees, Facebook is not limiting how many people listen in on a discussion and allows up to 50 speakers per room.

The Mark Zuckerberg-led company is also adding a range of new features that include live captions and a ‘raise a hand’ button that lets users join the conversation. 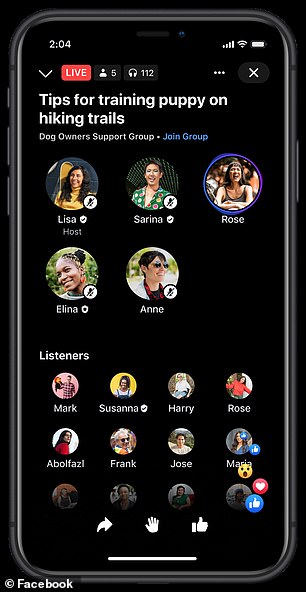 Facebook has officially rolled its Live Audio Rooms that is being called a Clubhouse copycat, as it let users host and listen in on live audio-only discussions

Clubhouse, which launched in April 2020, is an audio-chat social media platform available by invite-only.

It has seen a number of big names such as Elon Musk, Kevin Hart and even Zuckerberg, who made a surprise appearance in the app in February.

Facebook first announced it was developing  Live Audio Rooms in April, but today the feature is available to a select few in the US – but it is currently only offered on iOS, The Verge reports. 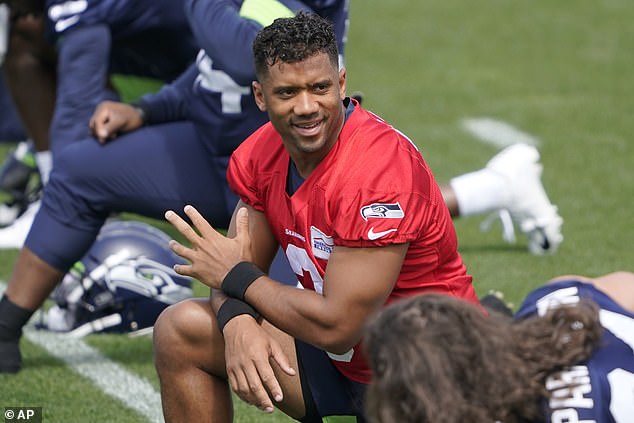 Unlike Clubhouse that caps attendees, Facebook is not limiting how many people listen in on a discussion and allows up to 50 speakers per room

Live Audio Rooms will notify users if their friends join a room, allowing them to opt in as well.

However, one of the biggest features Facebook is offering is live captions.

Clubhouse does not support the function, which is outlined in its community guidelines as ‘it does not allow transcriptions of chatrooms so content does not leave the app and remains exclusive.’

Without enabling captions, Clubhouse is losing out on users who are hearing impaired.

Live Audio Rooms also enable hosts  to select a nonprofit or fundraiser to support during their conversation and donations are taken directly within the room using a designated button.

This is another feature taking a stab at Clubhouse that makes room hosts direct attendees to outside links in order to collect donations.

Podcasts can be found on a creator’s page, which users can save, react to and comment on.

But it is the Live Audio Rooms that will take center stage in the roll out. 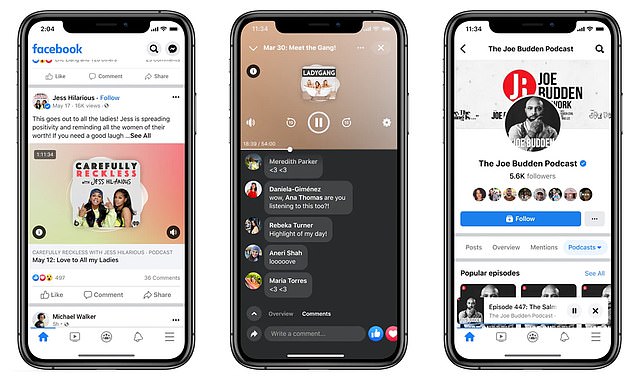 Along with Live Audio Rooms, Facebook has also launched podcasts on the platform, which allows people to listen via a mini-player or full-screen player. Podcasts can be found on a creator’s page, which users can save, react to and comment on

Ranjan Roy, co-founder and editor of ‘The Margins,’ a biweekly technology newsletter,  gave an interview with CNBC about how Clubhouse may be in trouble now that other social media platforms are launching similar models.

Roy said that when Clubhouse launched during the pandemic, it allowed people to have amazing conversations all while users were sitting in their homes.

‘Clubhouse was on its way,’ he said in the interview.

‘They had their moments of virility February 1 when Elon Musk went in, February 5 Mark Zuckerberg went in, but I think they are in a bit of trouble.’

Roy touched on Twitters new ‘Spaces’ that is also a Clubhouse copycat, which allows people to talk to and listen to with people they are already interested in.

In regards to Facebook, Roy said the social media platform does not have to do anything different to compete with Clubhouse or Twitter Spaces.

‘For all these platforms with live social audio, they don’t need to do too much.

‘Just depend on the networks.’