George Michael’s grieving boyfriend Fadi Fawaz has posted a touching tribute to the late pope icon on the first anniversary of his shock death.

Photographer Fawaz, 44, had been with George since 2009 and was the one who discovered his lifeless body on Christmas Day last year.

Today, as devastated fans of the former Wham! singer flocked to his home in Highgate, north London, Fawaz took to Instagram to share a heartfelt message to his former lover. 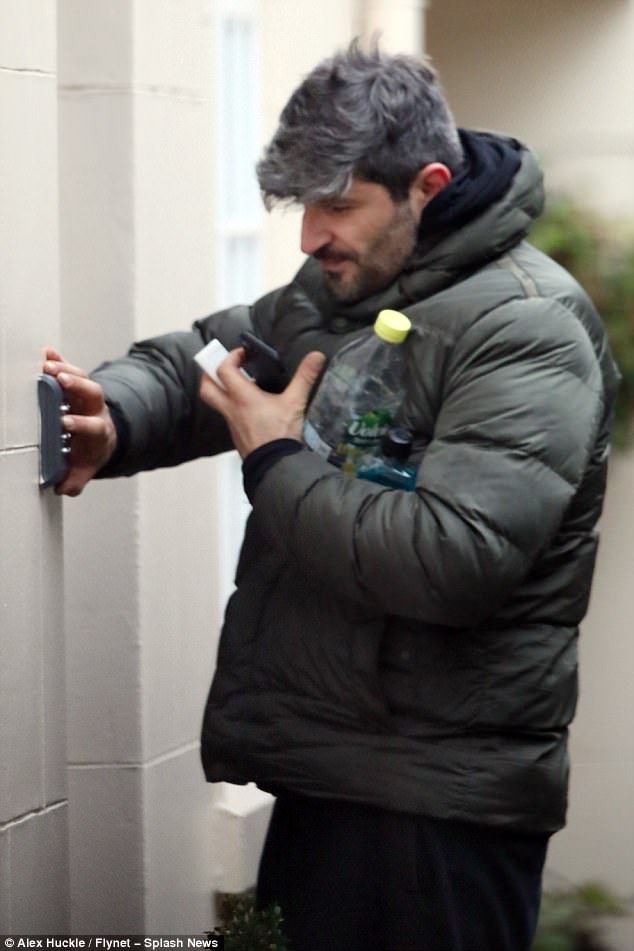 Photographer Fawaz, 44, had been with George since 2009 and was the one who discovered his lifeless body on Christmas Day last year 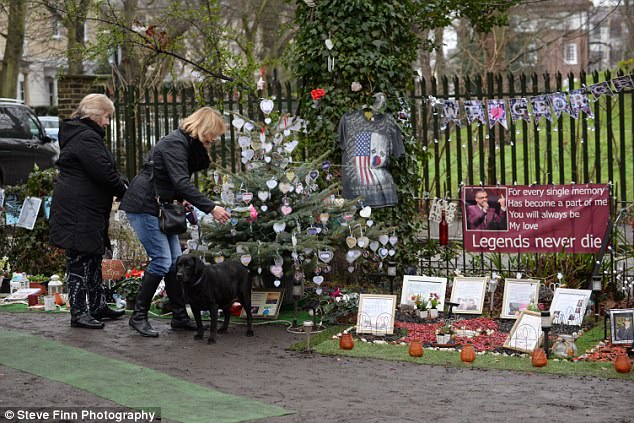 On the first anniversary  of George Michael’s death, heartbroken fans flocked to his former home in Highgate, north London 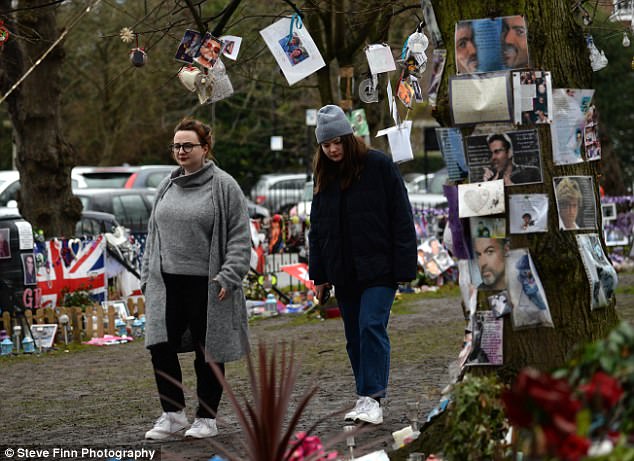 Land outside George’s former home has become a shrine to the late singer, with fans bringing pictures and other memorabilia to the scene 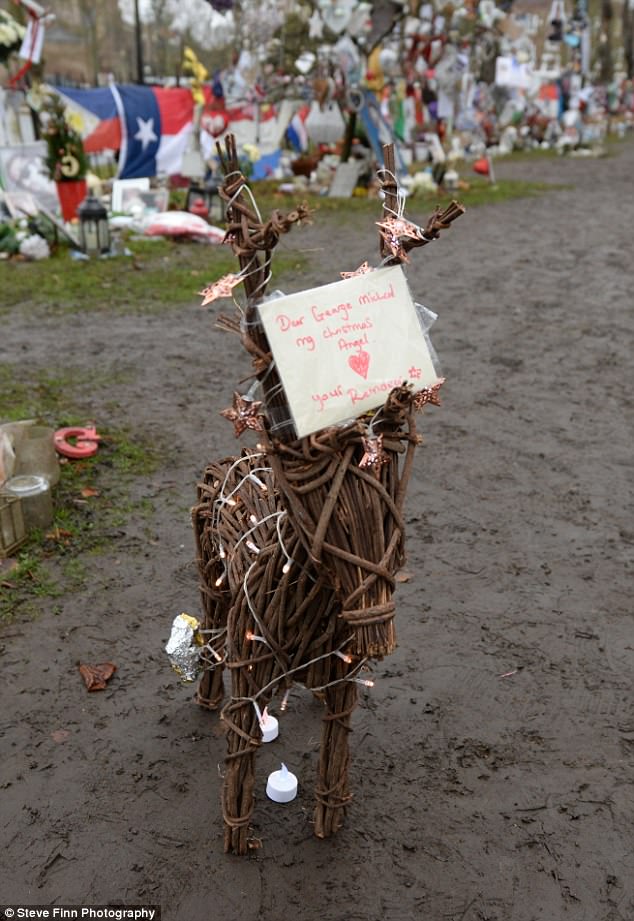 Today, one fan left a wooden reindeer at the scene. A card attached to the ornament read: ‘Dear George Michael, my Christmas angel. Your reindeer’ 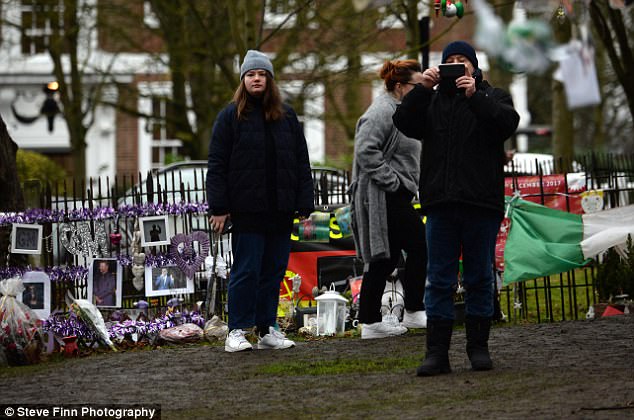 An extraordinary argument broke out between residents in wealthy Highgate, north London, with some of George Michael’s former neighbours wanting the tributes removed 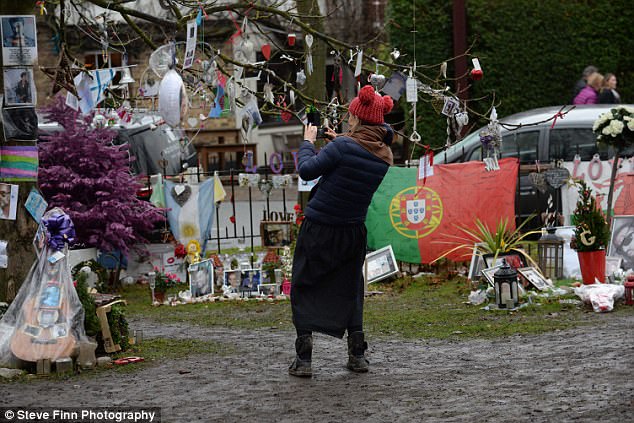 A George Michael fan took pictures of the sea of tributes outside the star’s former home. The site is decorated by pictures and flags from around the world

He posted a picture of their faces merged together with a poem written in red letters on the right cheek.

The poem opened with ‘I will always miss you till the day I meet you’ and was accompanied by the caption ‘It is what it is’.

Last week, as he prepared to face his first Christmas with George, Fadi revealed how he moved out of the house he shared as the grief was too much.

‘Wounded’ with grief, he fled to the countryside and cannot face staying in London because it brings back too many memories.

He told the Sunday Mirror: ‘I will be spending Christmas in the countryside with some friends. I can’t stand all the Christmas trees or lights around London.

‘It makes me so sad, I just want it over and done with.’

He vowed never to find love again and insisted he would never speak about the day he discovered George’s lifeless body in bed at their country manor in Goring-on-Thames, Oxfordshire. 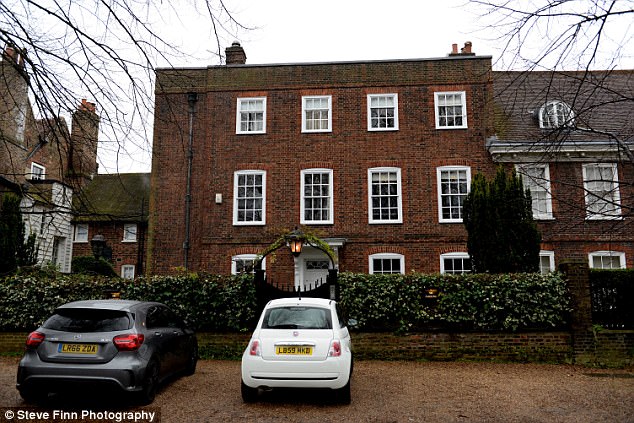 On the first anniversary of George Michael’s death, fans gathered outside his former home in Highgate, north London 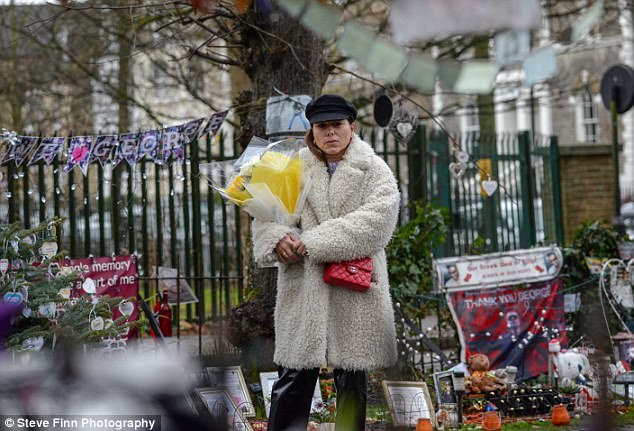 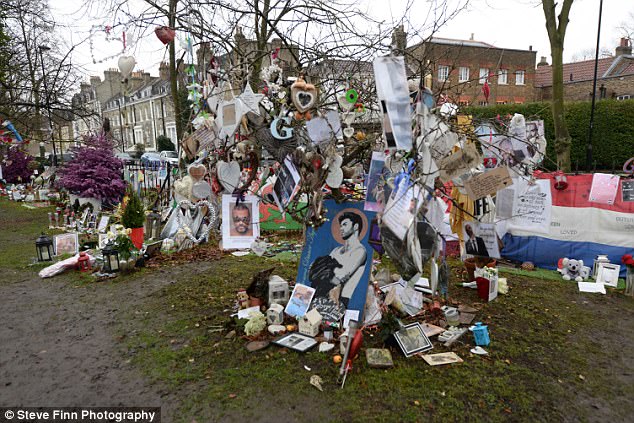 The tributes include posters and pictures of the late star, who died in Oxfordshire on Christmas day last year 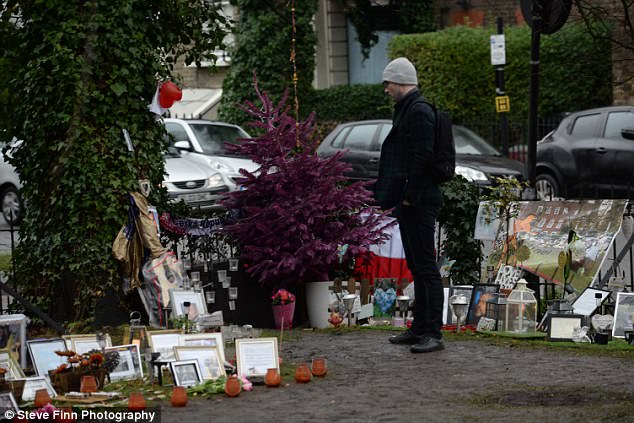 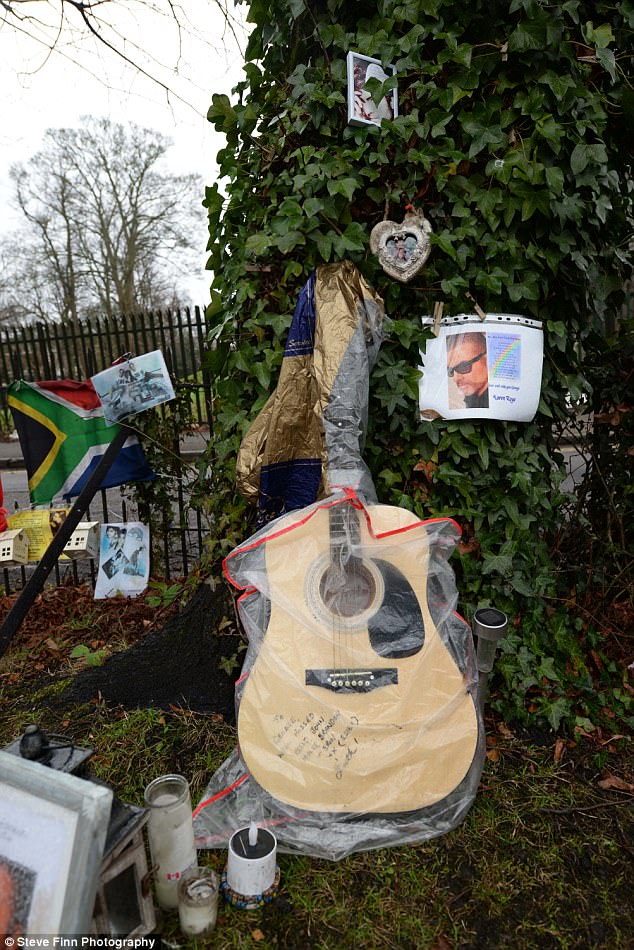 A tribute to George Michael included a guitar, candles and several pictures of the late star 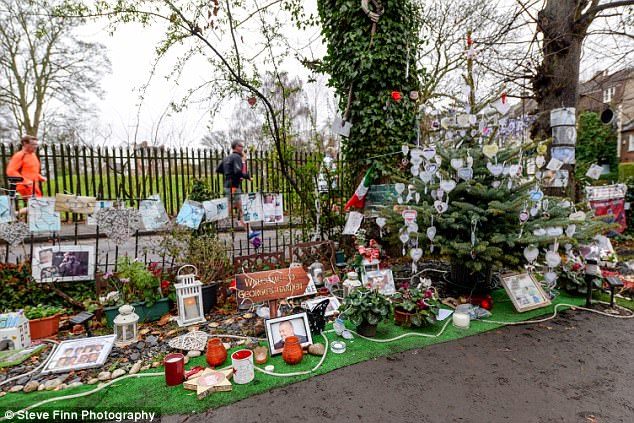 Yesterday it emerged George’s grave still does not have a headstone, despite it being a year since he died.

In the weeks leading up to the anniversary, thousands have laid tributes at the mansion where George died.

An extraordianry row has broken out between residents in wealthy Highgate and George’s fans.

Some have expressed disappointment at the lack of an official concert or memorial to mark his passing. 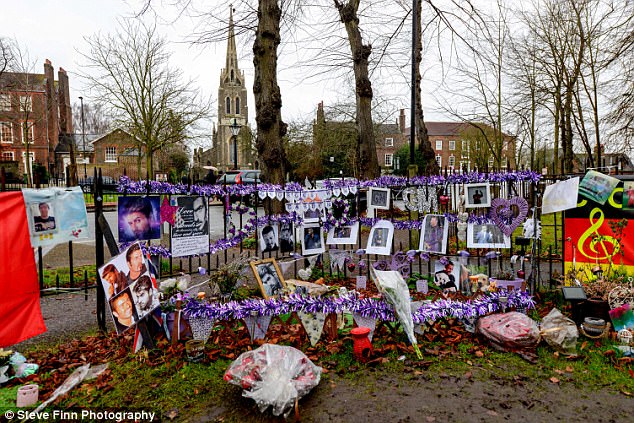 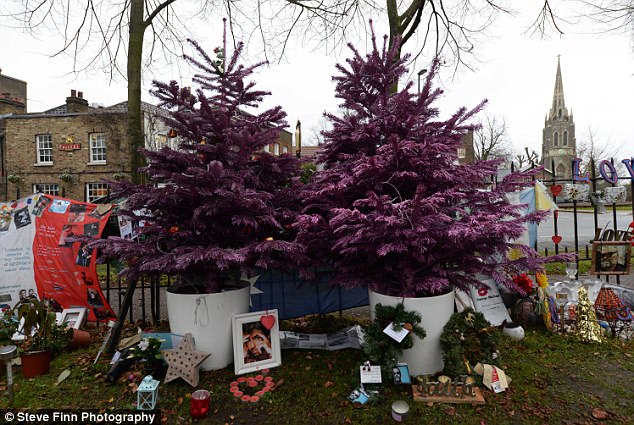 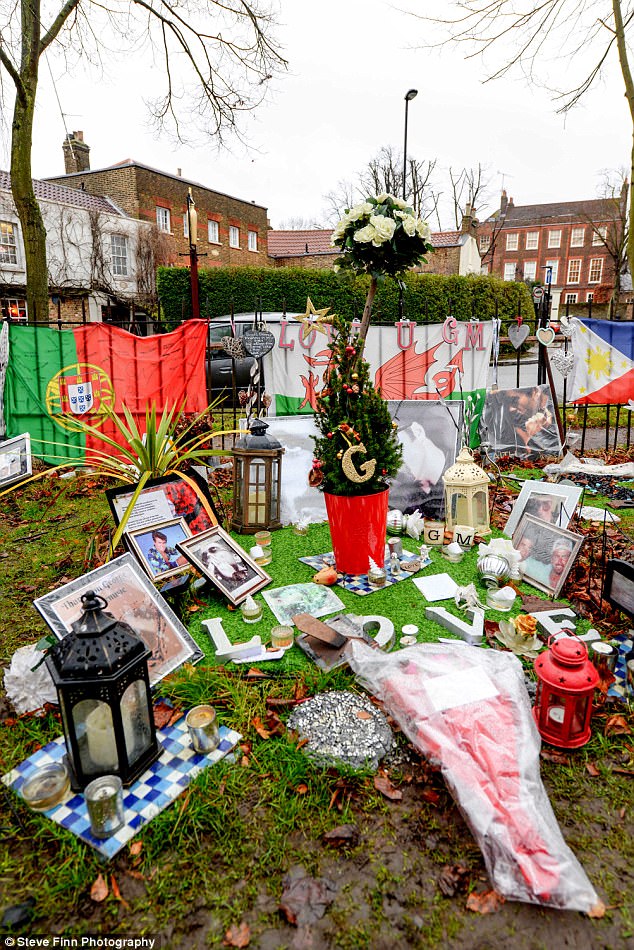 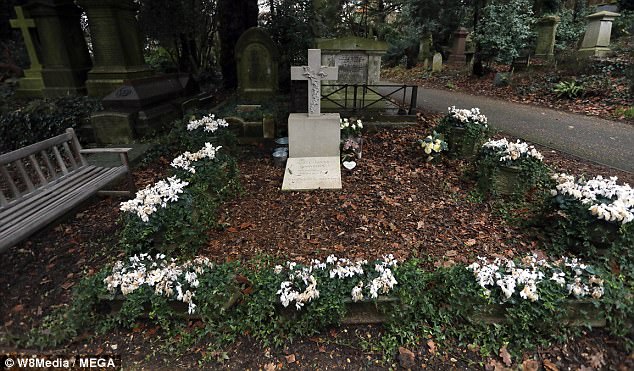 Yesterday it emerged George’s grave still does not have a headstone, despite it being a year since he died. The space in Highgate Cemetery, north London, still lacks a formal tribute

Fadi – who helped George through rehab in 2015 – has sought comfort in writing poetry about the singer, who was nicknamed Yog.

He describes life without the Careless Whisper singer as ‘hell’ in one effort title One Christmas Day, which he plans to turn into a song.

This week he was spotted leaving George’s Regents Park home, where he still lives.

The pair met in 2009 and became romantically involved after the singer split from his partner of 13 years, Texan businessman Kenny Goss.

George’s father Jack, along with the star’s sisters Melanie and Yioda have said hearing his hits has proved a challenge since he died.

The singer died of heart failure after a build-up of fat in his liver, a coroner confirmed. His grave is next to that of mother Lesley’s.

He was filming a documentary – Freedom – in the weeks leading up to his death.

It began as a chronicle of the singer’s legacy, but became a tribute to his life when he died, featuring stars such as Liam Gallagher, Mary J Blige and Elton John.

Freedom was narrated by George himself, leaving ex-boyfriend Kenny, 59, unable to watch it as it reminds him he’s gone.