Parcel and package delivery scams are the most common type of ‘smishing’ text messages, new data has revealed.

Smishing is a technique that criminals use to target consumers with texts impersonating trusted organisations.

These text messages often contain a link to a fraudulent website that replicates a legitimate site, asking the victim to enter personal and financial information.

Now research has found that, over a 90-day period, the number of scam texts pretending to be from a delivery firm represented more than half of all smishing attempts, according to new data provided to UK Finance by cybersecurity company Proofpoint.

Each year within the UK, millions of people report text messages as spam with Proofpoint operating the 7726 text message system on behalf of mobile phone operators, which allows customers to report suspicious texts.

UK Finance revealed that, aside from parcel delivery smishing scams, those pretending to be from a bank or other financial institution represent around a third of texts.

During the recent 30-day period however, the proportion of delivery scam texts has increased significantly and represents three times the number of those pretending to be from a bank.

Some 67.4 per cent of smishing campaigns were parcel and package delivery texts in the past 30 days whilst just 22.6 per cent were purporting to be from other financial institutions and banks.

Other smishing attacks made up 9.6 per cent whilst Government Entity scams made up just 0.4 per cent.

This includes criminals posing as organisations such as HMRC and DWP.

Malicious texts are often part of a wider scam. If someone clicks on a link and provides information, they may then get a phone call from someone claiming to be from their bank.

Exploiting the personal and financial information provided in the text message, the person offers to help safeguard funds by trying to convince someone to transfer money into a ‘safe account’, which is in fact an account run by the same criminal that sent the original text message.

Reports to the 7726 system are being used by the National Cyber Security Centre to take down fraudulent website URLs and prevent further fraud losses.

The data shown in the table below covers those categorised as smishing for the 30 and 90-day periods to mid-July.

Katy Worobec, Managing Director of Economic Crime at UK Finance, said: ‘Criminals are experts at impersonating a range of organisations and have capitalised on the pandemic, knowing that many of us will be ordering goods online and awaiting parcel deliveries at home.

‘We are urging people to follow the advice of the Take Five to Stop Fraud campaign and to always stop and think whenever you get a text message out of the blue before parting with your information or money.

‘Always avoid clicking on links in a text message in case it’s a scam and forward any suspected scam text messages to 7726 so that the criminals responsible can be brought to justice.’

Take Five to Stop Fraud urges people to remember the Stop, Challenge, Protect behaviours and to recognise that criminals are experts at impersonating people, organisations and the police.

Laura Suter, head of personal finance at AJ Bell, added: ‘Scammers have homed in on the massive surge in everyone shopping online while they were stuck at home in lockdown and are using it for their gain.

‘But even now lockdown has eased, the scammers are showing no signs of easing up. Once the scammer has got your initial details they’ll usually contact you for more information, involving transferring cash from your bank account – with many people losing their life savings this way.

‘Last year scammers stole £479million from unsuspecting people through these scams, with the actual figure likely to be a lot higher as much of it goes unreported.

‘Everyone thinks they are smart enough to spot a scam text, but the messages have become so sophisticated that it’s easy to be caught out.

‘Lots of people will also see the text when they are in a hurry to receive their package or are rushing, so won’t stop to think about whether it’s legitimate or not. 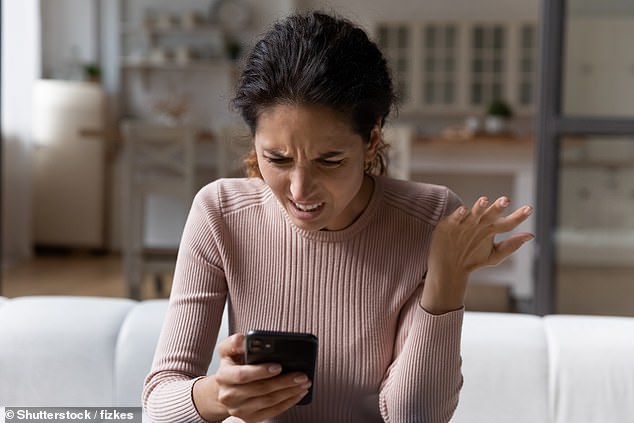 ‘The best thing you can do is stop to consider the message or show it to a friend or family member – better to get a package late if the message is genuine than get caught up in a scam.’

Text and email scams have been rife in recent times with many fraudsters taking advantage of the pandemic.

This is Money has previously reported that consumers were falling victim to a Post Office scam when people were sent emails asking them to send a payment to release packages.

Screenshots of the email show the fraudsters telling the recipient there is a parcel waiting for them but they must pay a shipping cost before it can be delivered.

A link is then attached which, if clicked on/and or completed, could put consumers at risk of fraud.

Those who are expecting packages are most likely to be tricked while it appears scammers have wised up to the fact some delivery firms do ask for extra fees to be paid in order to release items.

Parcel delivery payments have also become a recent issue with consumers finding themselves falling foul of delivery companies for other reasons.

This is Money has reported that many UPS consumers are being told they must pay high delivery fees to receive items from overseas.

Our investigation revealed that many of these fees were not correct with some customers overcharged by hundreds of pounds.

Meanwhile, courier behaviour has been criticised by Citizens Advice which recently called for fines for delivery companies after saying the way parcels are delivered is not fit for purpose.

It said, despite a large number of people not receiving their deliveries, the majority of couriers receive no penalty for lost or stolen deliveries.

How to protect yourself from smishing scams

• Remember that criminals will send out smishing text messages with links leading to fake websites used to steal personal and financial information.

These text messages may appear to be from trusted organisations and may use official branding to convince you they’re genuine. Always access websites by typing them into the web browser and avoid clicking on links in texts.

• Remain vigilant and check delivery notifications very carefully to ensure they are genuine. Text messages may look very similar to those that are genuine but may use generic greetings, such as Dear Sir/Madam, or include spelling errors.

• Always question claims that you are due goods or services that you haven’t ordered or are unaware of, especially if you have to pay any fees upfront.

• Customers can report suspected scam texts to their mobile network provider by forwarding them to 7726 which spells ‘SPAM’ on your telephone keypad.