Families forced to flee Harvey return to pick up pieces

Flood victims have started returning to their homes in Texas to face the complete devastation inflicted upon them by Hurricane Harvey.

Families forced to flee when the storm struck are now going back for the first time to find their homes still flooded and their belongings completely destroyed as they start the heartbreaking clean up.

Maribel Garcia had to take a boat to back to her Crosby home – 20 miles north-east of Houston – on Wednesday and broke down in tears when she found it was still engulfed in water.

‘I don’t have the words,’ a tearful Garcia told CBS as she stood in the living room of her damaged home. 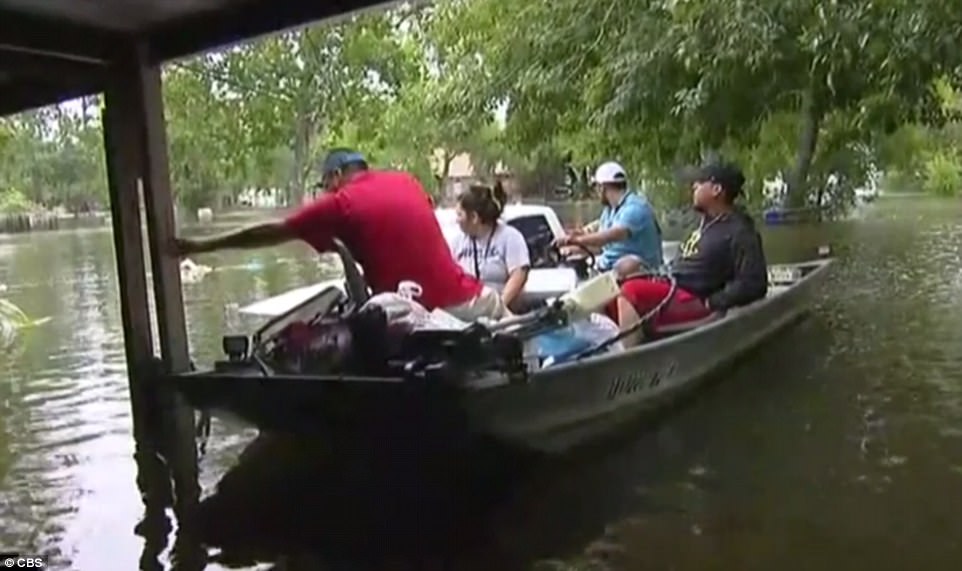 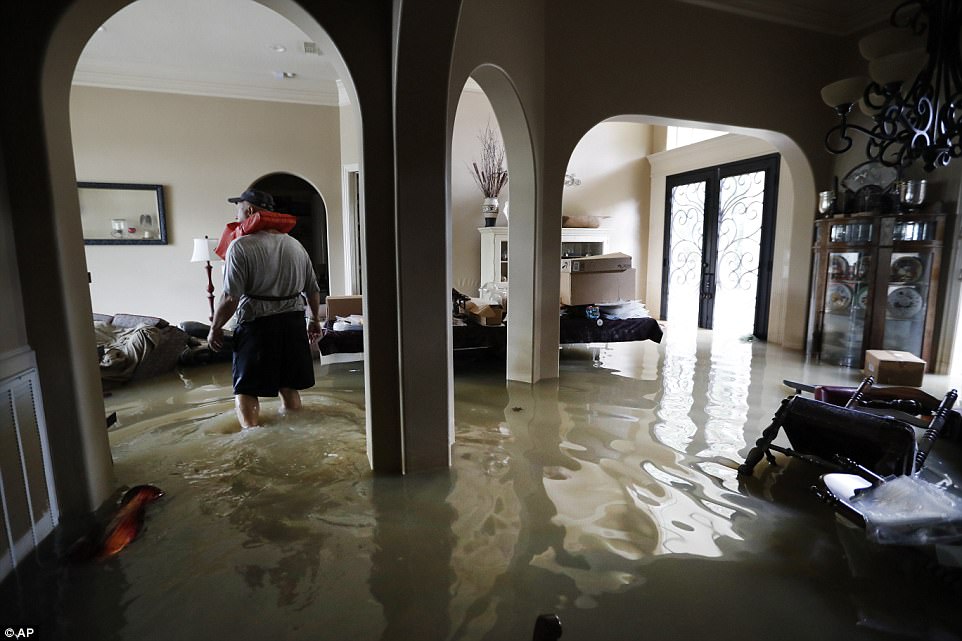 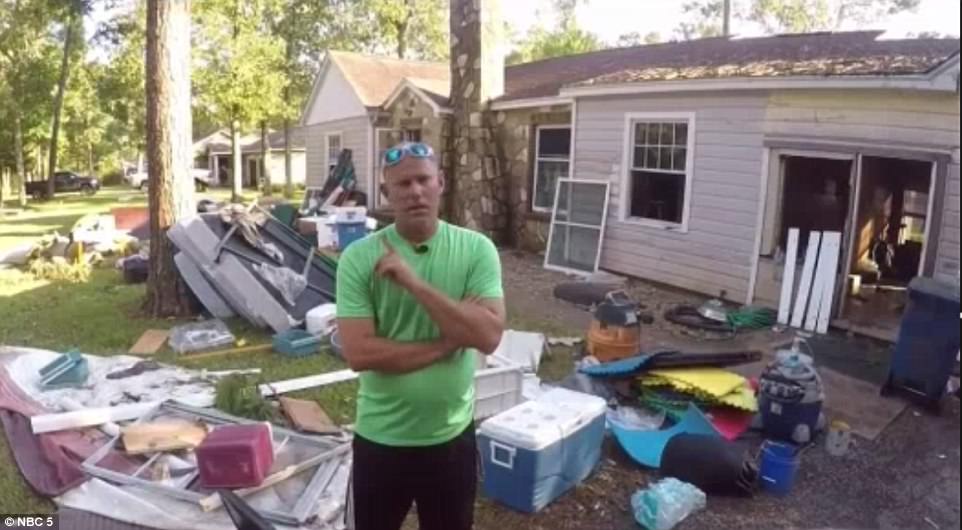 About 42 miles away in Dickinson, Chris Rhoads (above) lost everything because he was out helping others and didn’t have time to save anything of his own. He was the only one with a boat in his area and was busy rescuing people trapped on their roofs

‘My kids want to come back home, but…

‘I just feel overwhelmed, you know, helpless. I don’t know what to do right now.’

About 42 miles away in Dickinson, floodwaters had mostly receded by Thursday allowing residents to go through their homes and pile high their destroyed belongings by the curb.

Chris Rhoads lost everything because he was out helping others and didn’t have time to save anything of his own. He was the only person around with a boat to help rescue his trapped neighbors.

‘When I left, the water was barely getting into the house. When I came back, it was waist-high,’ Rhoads told NBC.

‘I was the only boat. 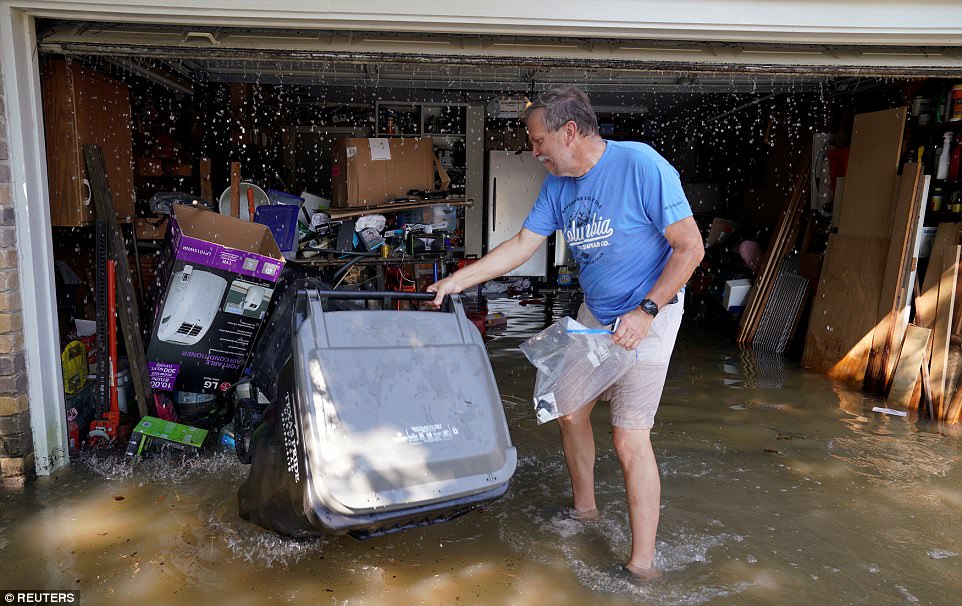 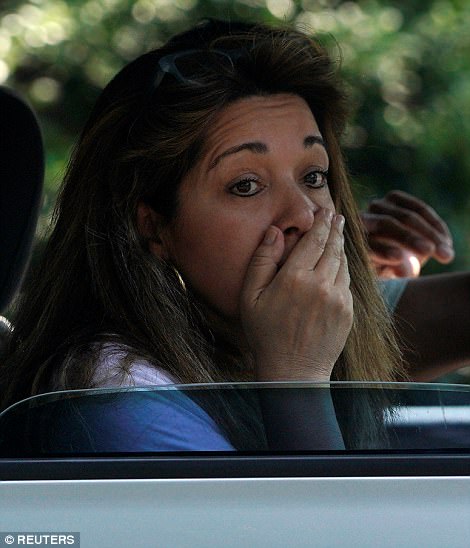 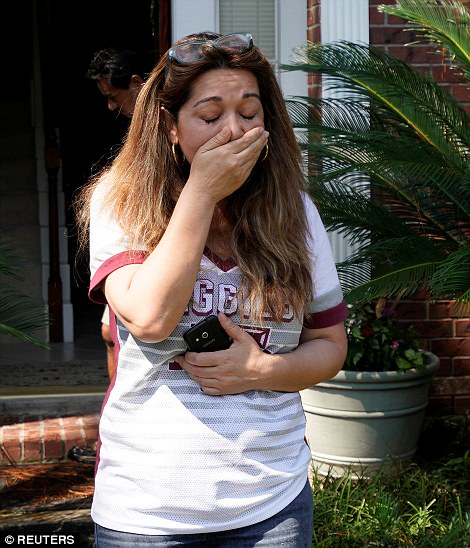 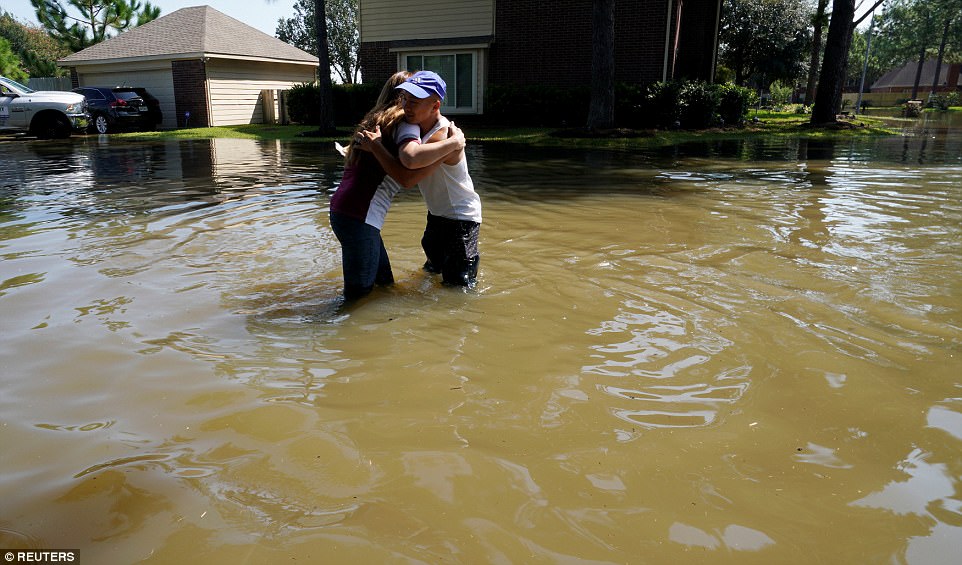 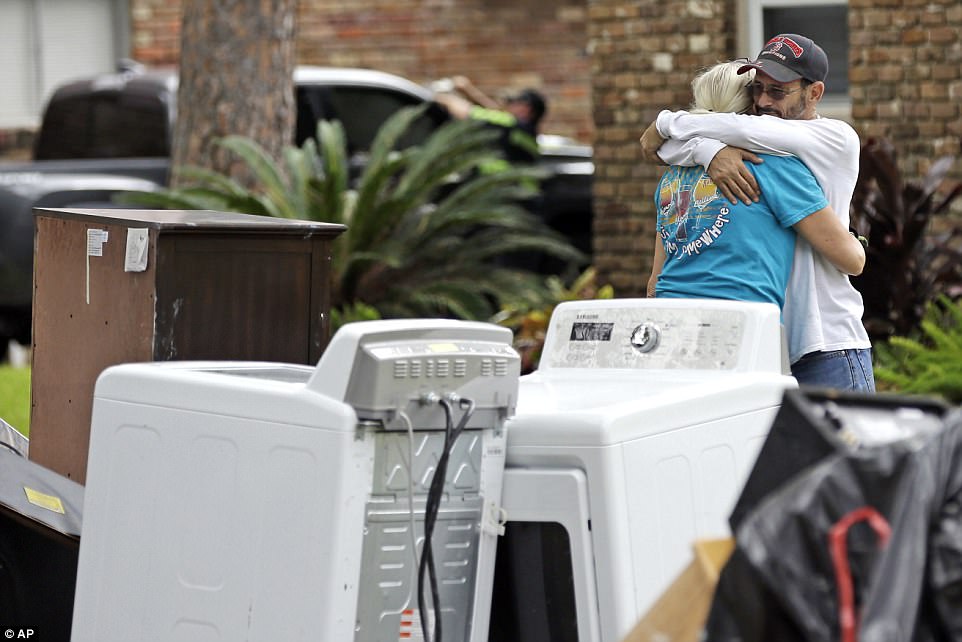 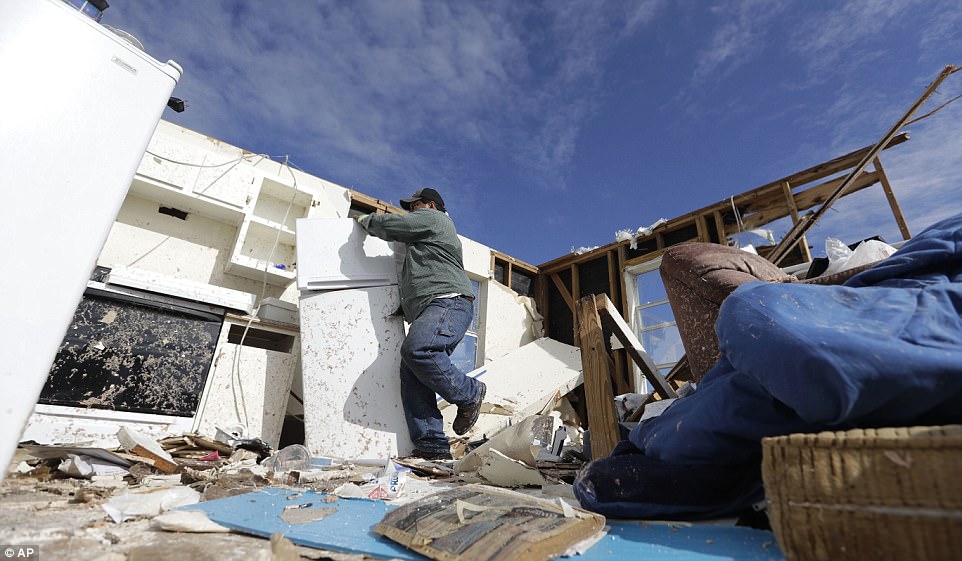 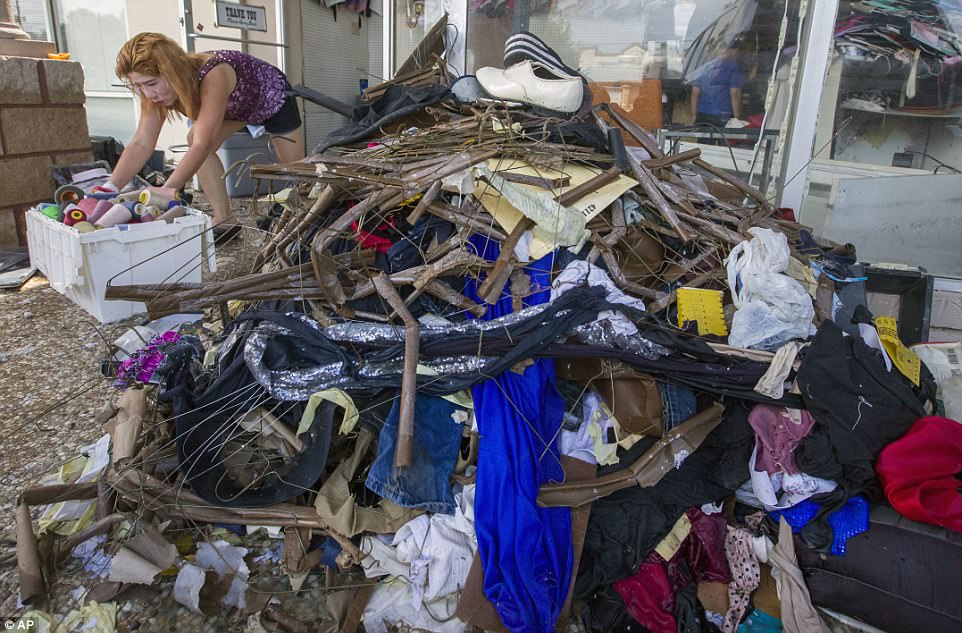 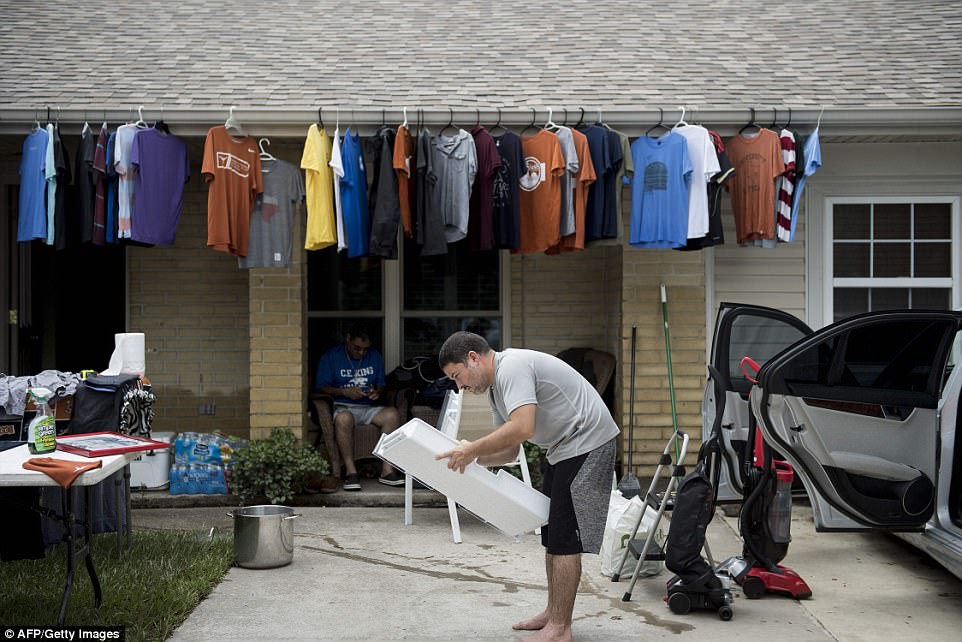 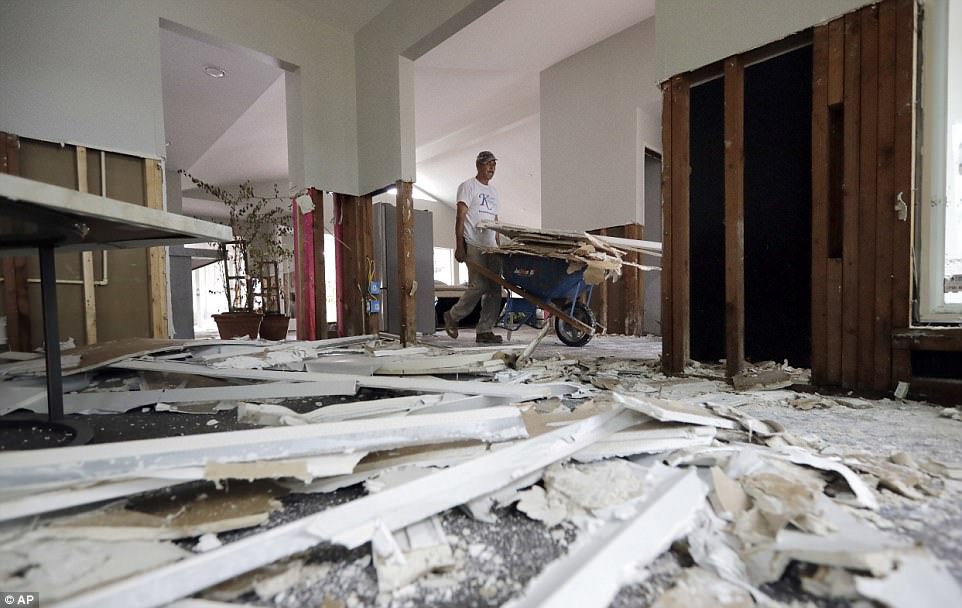 Jose Martinez removes drywall from a home in Houston on Wednesday

Other families across Texas are already ripping up their damaged floorboards and getting to work cleaning their soaked belongings, trying to salvage whatever they can.

Thousands of home in Houston and other close neighborhoods remain under water and could stay that way for days, or even weeks.

In the suburb of Meyerland, hundreds of families were emptying their now foul-smelling homes on Thursday as temperatures climbed into the 90s.

They were pictured piling up couches, drywall and carpets from their homes where floodwaters had lingered for well over 24 hours.

Anita Williams, 52, was among dozens of people lined up Thursday morning at a shelter at Houston’s George R. Brown Convention Center to register for FEMA aid. She said she had returned to her neighborhood on Wednesday to survey the damage to her one-story house.

‘It’s not my house anymore. My deep freezer was in my living room,’ she said, her voice breaking. 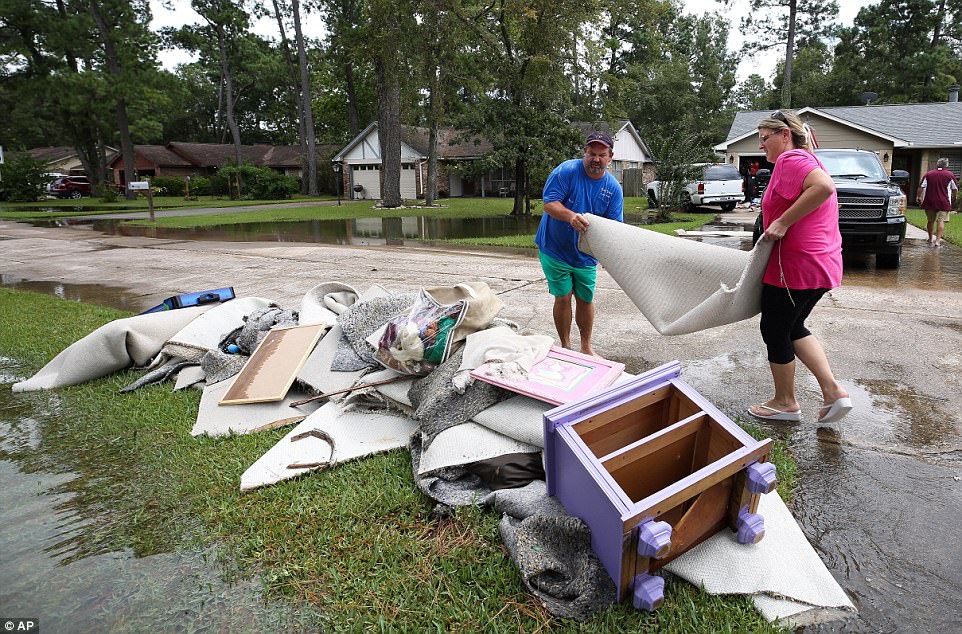 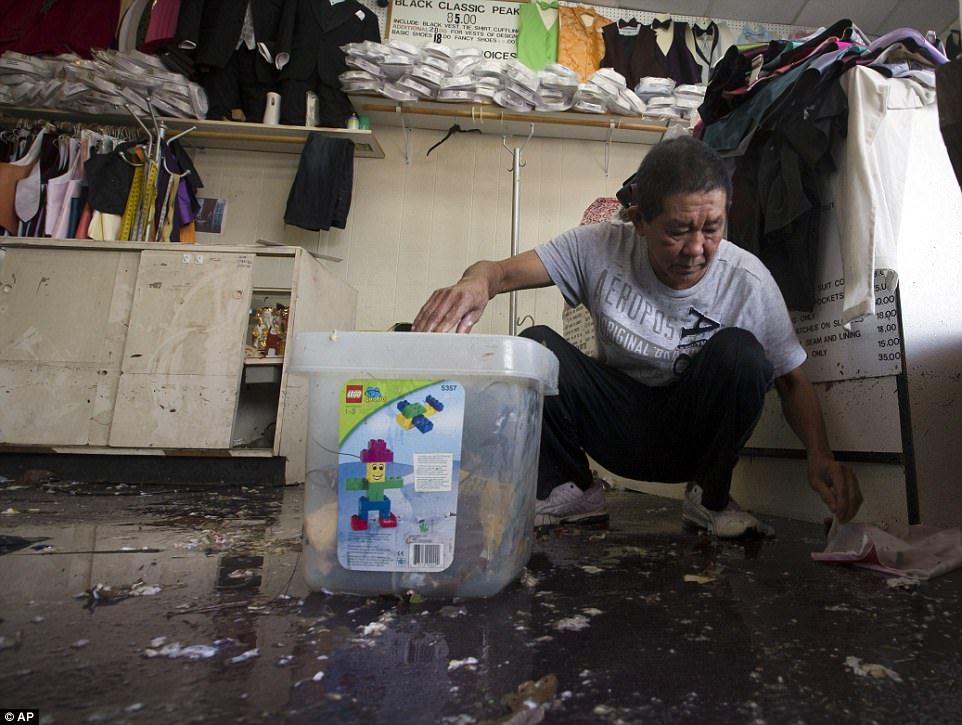 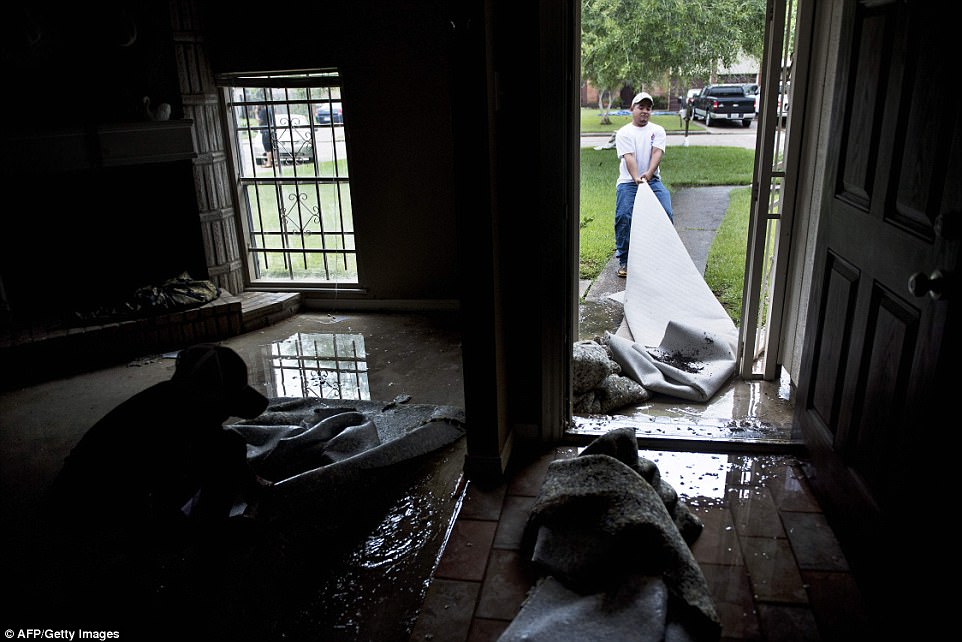 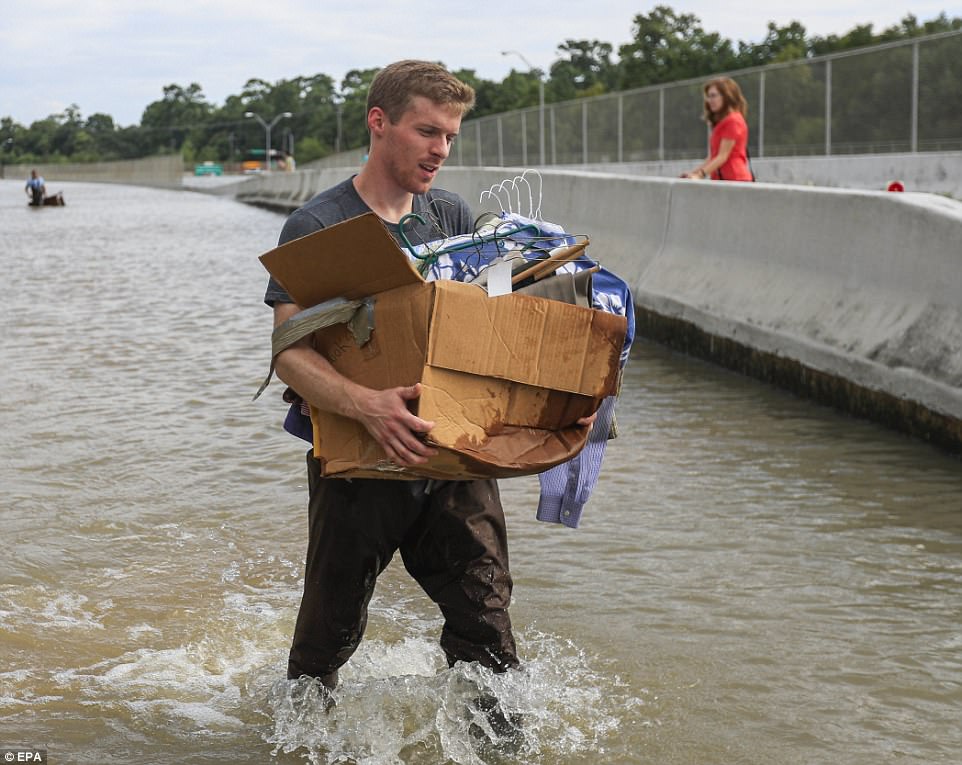 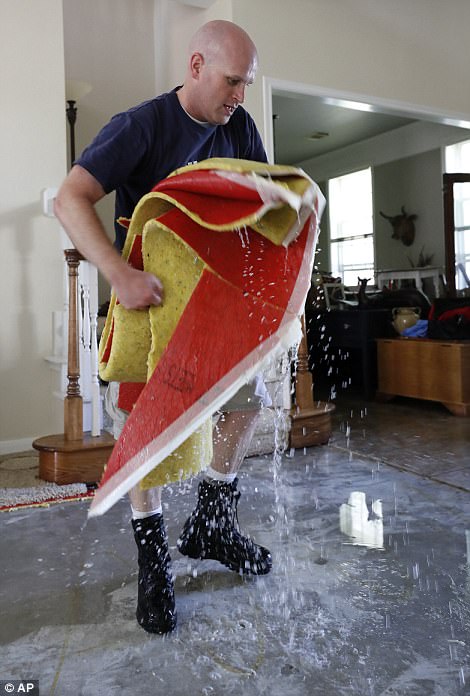 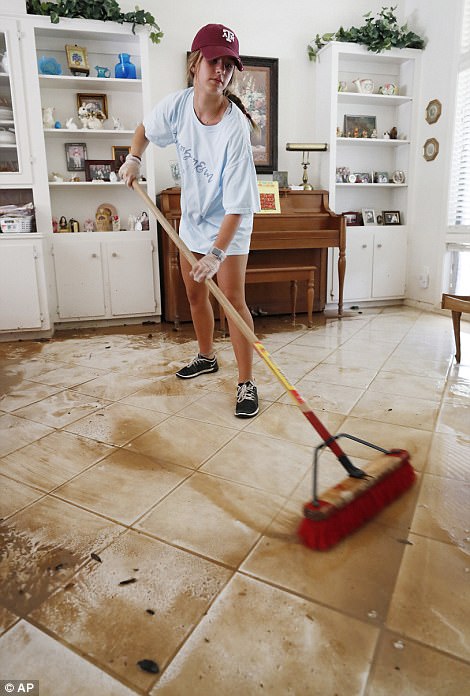 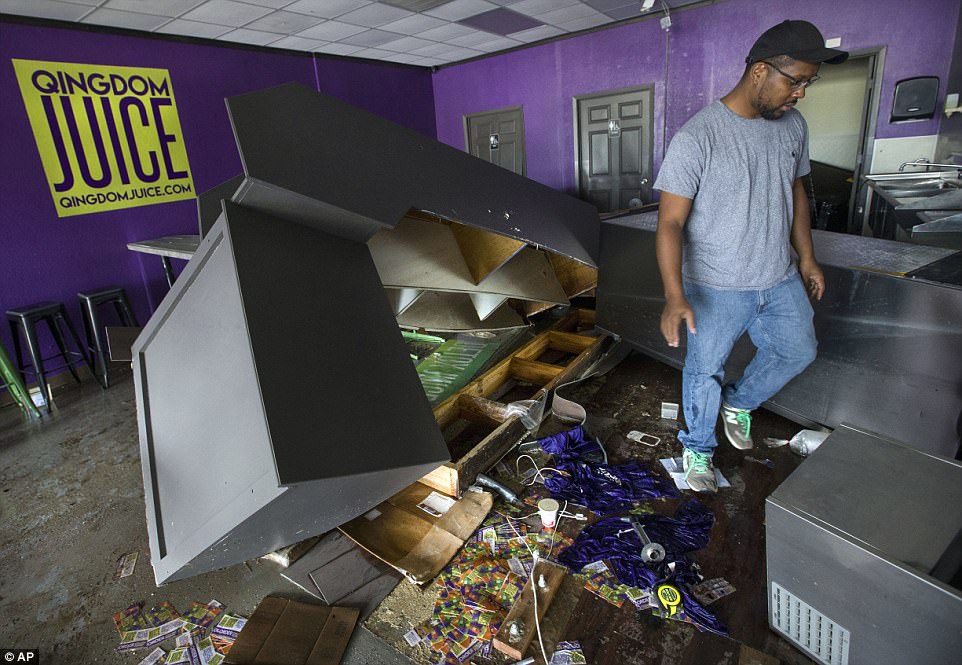 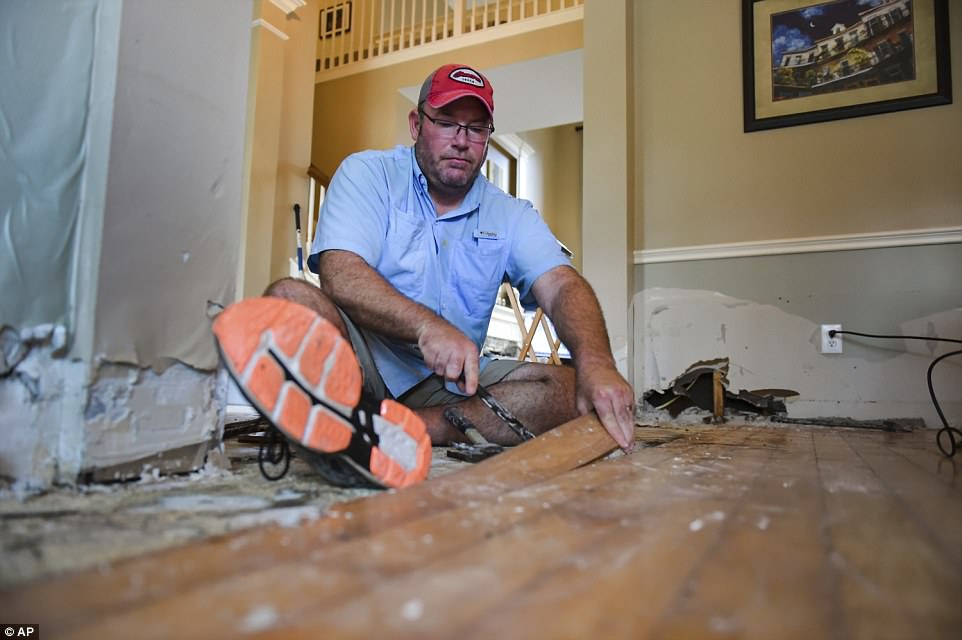 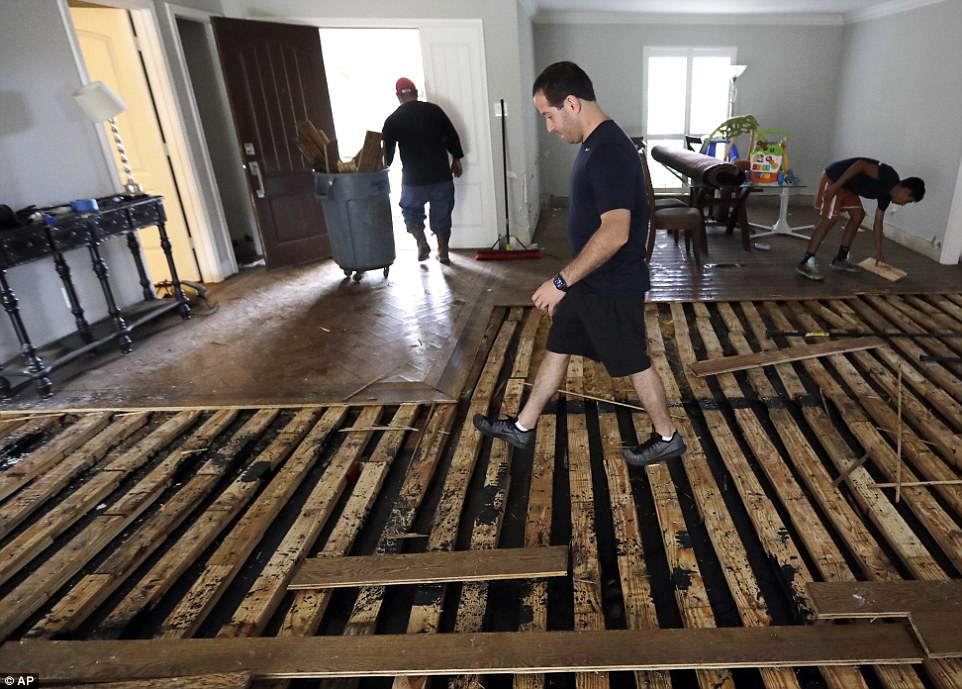 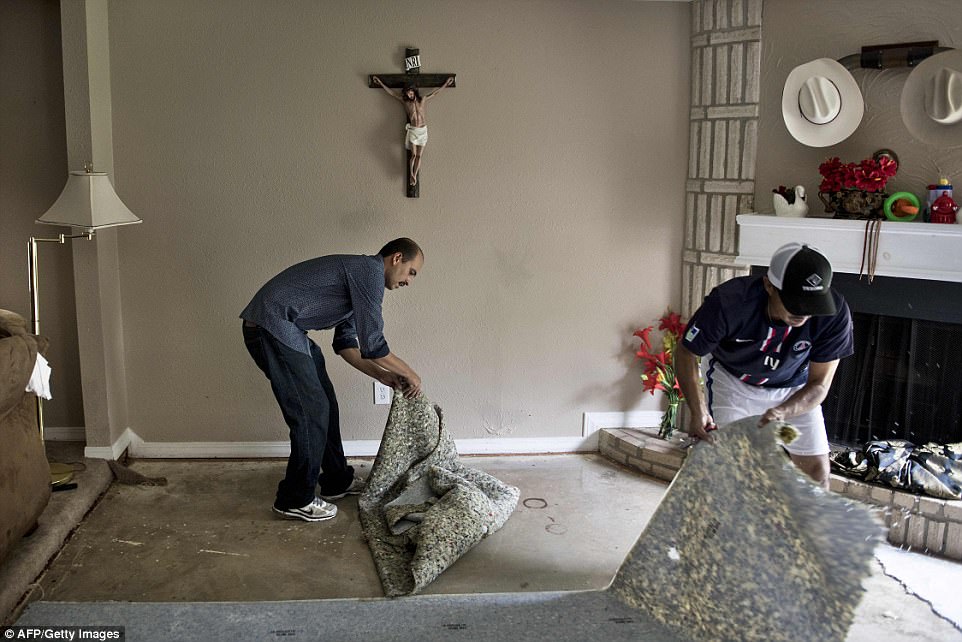 Moody’s Analytics estimated the economic cost from Harvey for southeast Texas at $51 billion to $75 billion, ranking it among the costliest storms in US history.

At least $23 billion worth of property has been affected by flooding from Harvey just in parts of Texas’ Harris and Galveston counties, a Reuters analysis of satellite imagery and property data showed.

The death toll from the storm continues to rise with Texan fire fighters now going door-to-door in a grim search for survivors and victims.

Flood waters have receded enough in Houston for the recovery mission to begin, six days after the hurricane first made landfall, and there are increasing sightings of bodies floating in the flood water in Beaumont.

The official death toll across the entire Gulf Coast region is currently 38 but it is likely to become exponentially higher as the bodies of the dead are recovered.

The storm has drawn comparisons to 2005’s Hurricane Katrina, which killed more than 1,800 people in New Orleans, and 2012’s Superstorm Sandy, which killed 132 around New York and New Jersey.