Friends and family gathered to remember the life of crypto-currency billionaire Matthew Melon at an intimate funeral service in Florida on Saturday.

The banking heir was found dead in his Mexico hotel room on April 16, the same day he was due to check in to a rehabilitation clinic.

The 54-year-old billionaire who dabbled in fashion and made a fortune off a crypto-currency called XRP coin struggled with drug addiction throughout his adult life.

Loved ones gathered at Saint Joseph’s Episcopal Church in Boynton Beach to remember the father-of-three.

Guests arrive in Delray Beach, Florida, for the funeral of crypto-currency billionaire Matthew Mellon, which took place in the intimate setting of St Joseph’s Episcopal Church 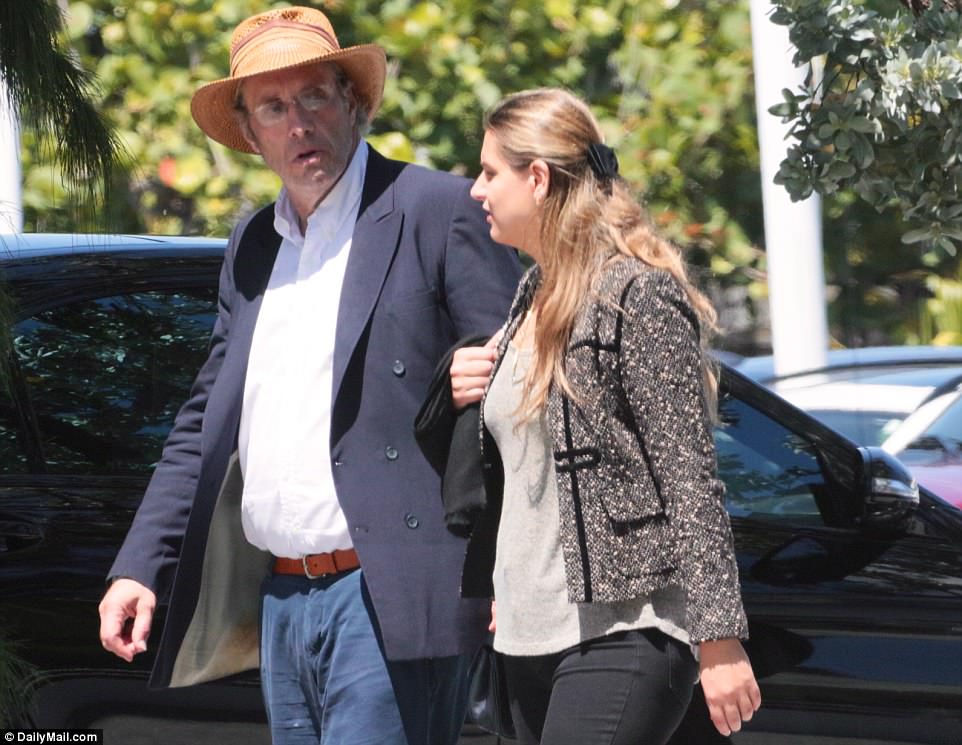 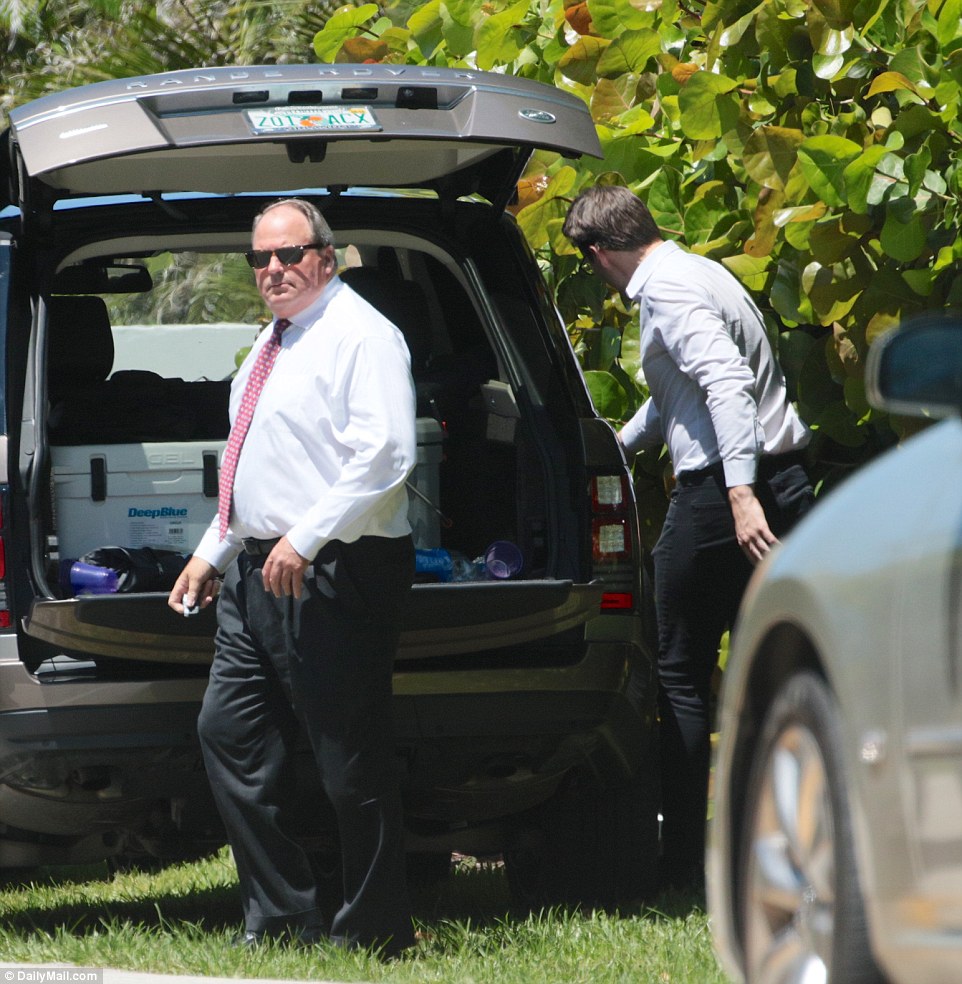 Among the guests were his ex-wives Jimmy Choo co-founder Tamara Mellon and fashion designer Nicole Hanley.

The funeral service card invited guests to remember Mellon with the moving quote: ‘A life so beautifully lived deserves to be beautifully remembered’.

After the service guests headed down to the Gulfstream Bath and Tennis Club for refreshments.

Mellon was found dead in his hotel room in Cancun, where he had traveled to check into Clear Sky Recovery rehabilitation clinic.

‘He was supposed to check in Monday morning but we received word around 9am that he has passed away,’ Dr. Alberto Solà, the medical director of Clear Sky Recovery, said to the New York Times. 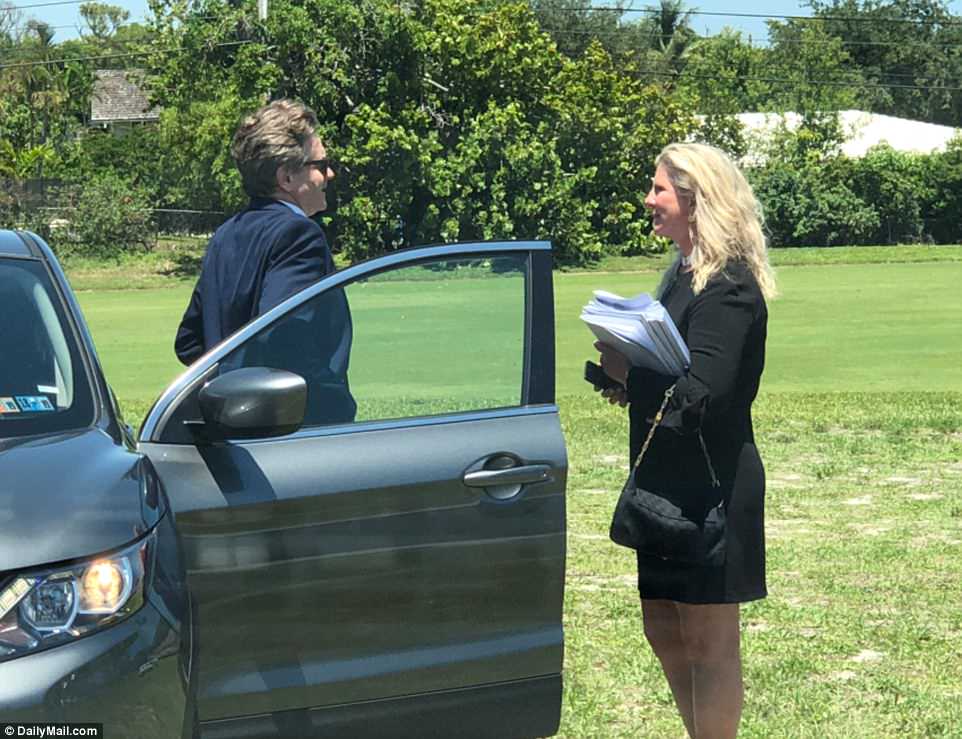 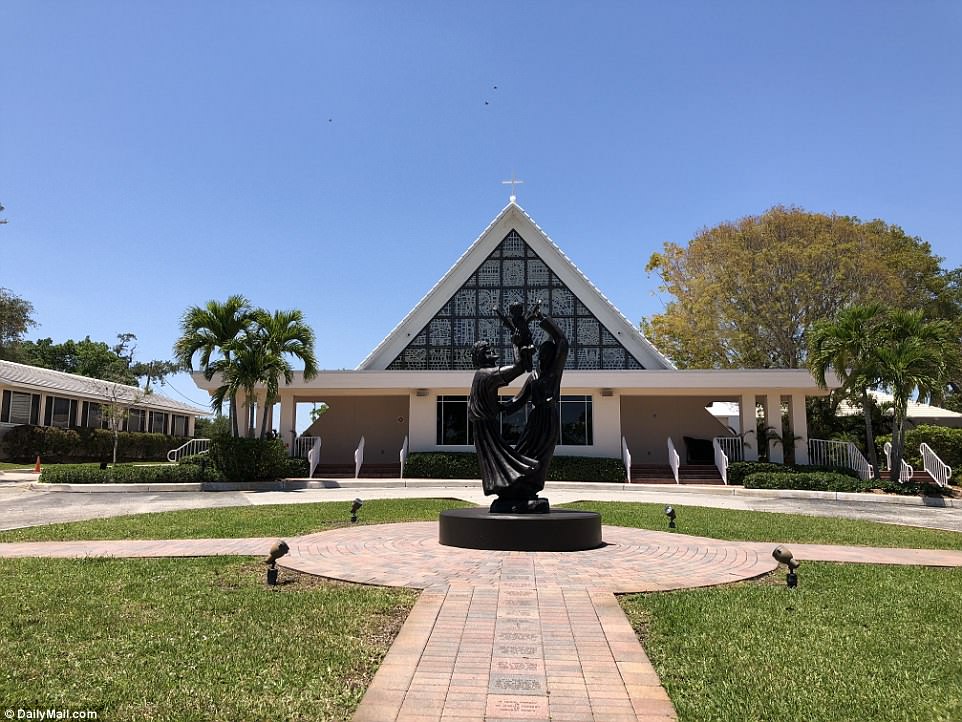 Loved ones gathered for Matthew Mellon’s funeral Saturday at Saint Joseph’s Episcopal Church in Boynton Beach in Florida, pictured above 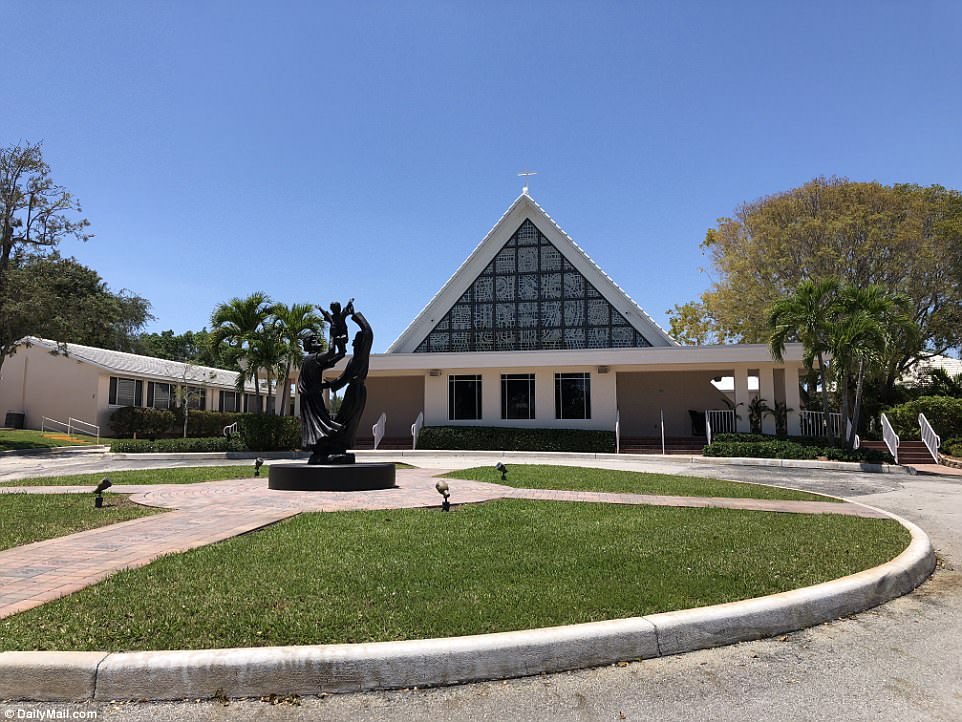 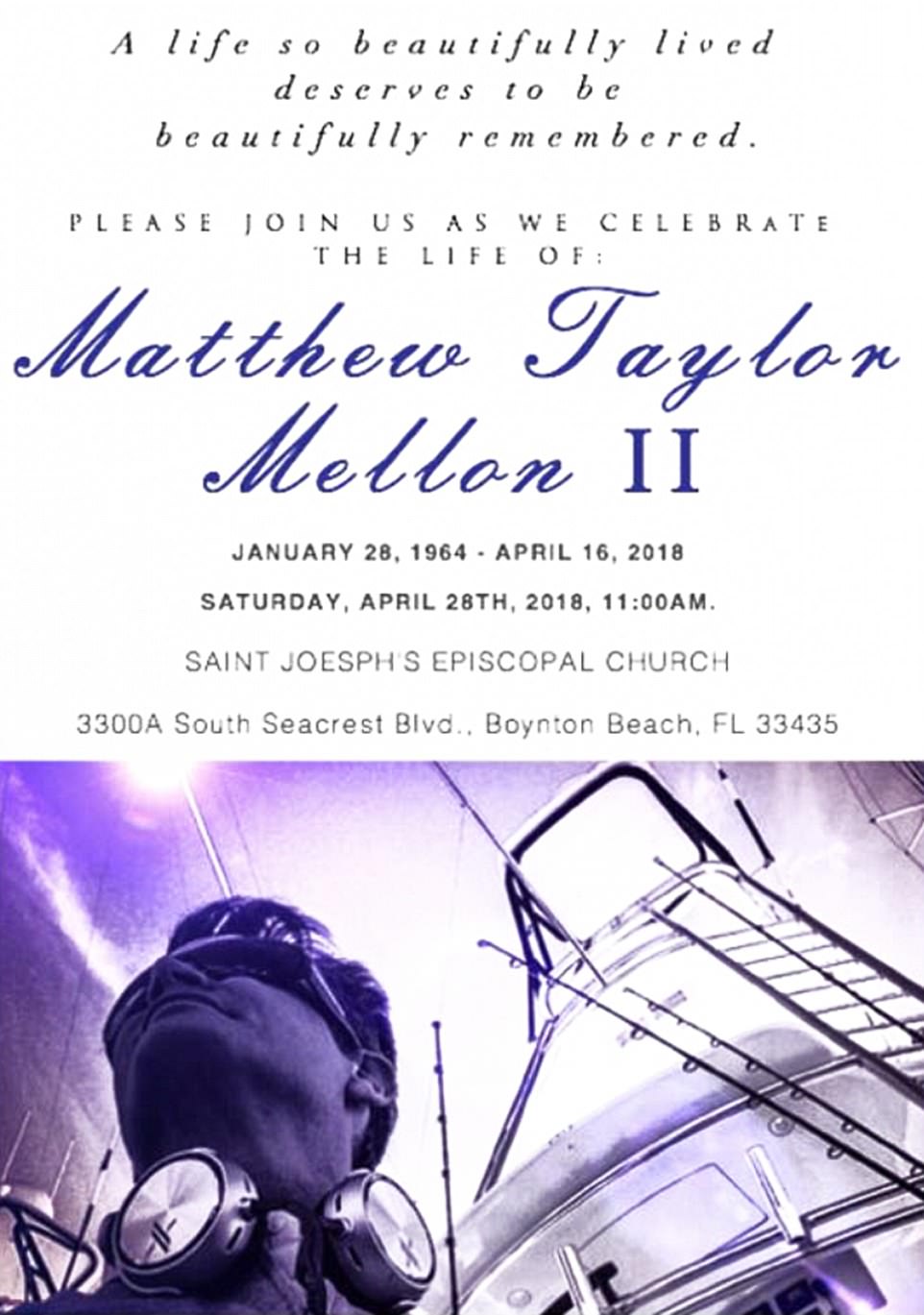 His funeral card included the quote: ‘A life so beautifully lived deserves to be beautifully remembered’

Just days earlier, he had stopped by his parents home in Delray Beach, Florida.

‘We had dinner with him on Saturday night, a joyful dinner and a very memorable dinner, more than we realized at the time,’ his stepfather J. Reeve Bright said.

Mellon had been sober for about three months before he headed to the rehab center in Mexico for follow up treatment, according to a family spokesperson. 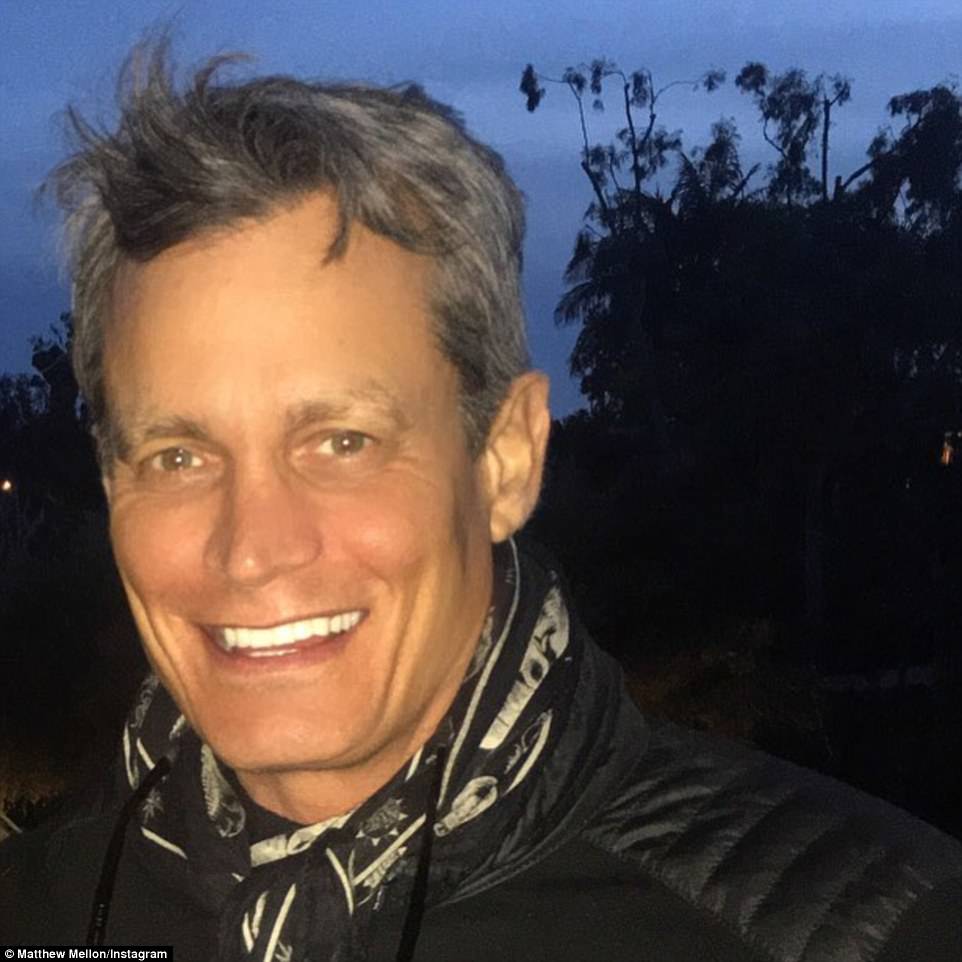 Mellon was a billionaire who inherited wealth as a member of one of the oldest banking families in the country, but also made his own fortune in crypto-currency 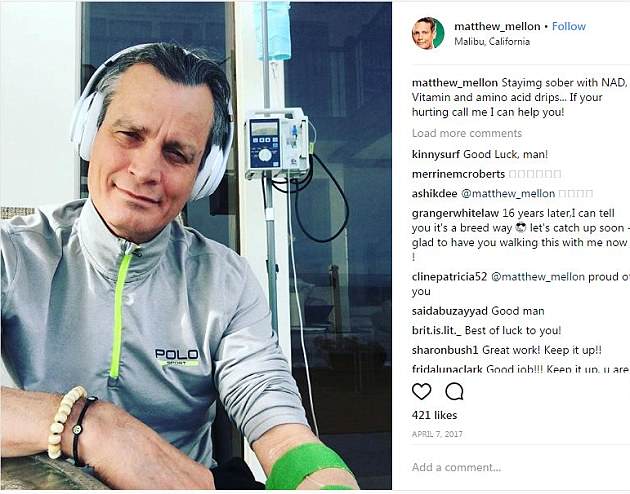 He struggled with drug addiction throughout much of his adult life, pictured above in a post from 2017 showing his means to stay sober through vitamin and amino acid drips 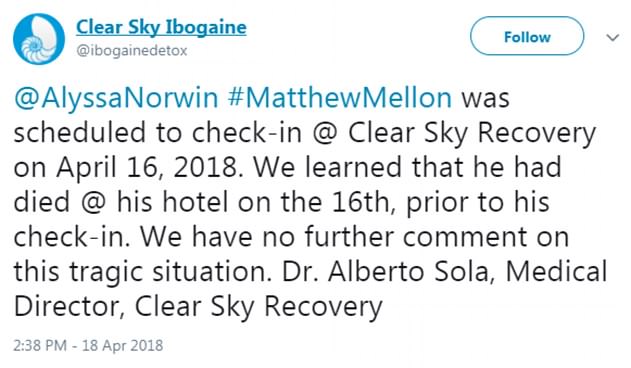 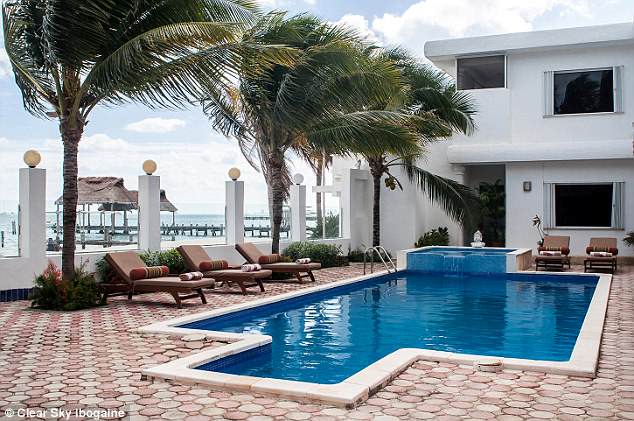 The facility where he was due to check-in (pictured above) specializes in drug addiction treatment using Ibogain, a psychedelic plant-based drug which is not approved for any medical uses in the United States

The facility where he was due to check-in specializes in drug addiction treatment using Ibogain, a psychedelic plant-based drug which is not approved for any medical uses in the United States.

His girlfriend of four months Robert F. Kennedy Jr.’s daughter Kick Kennedy, 30, had urged him to check back into rehab, according to a Dailymail.com source.

She even asked that he not attend her birthday party on April 13 at Ceconni’s in Los Angeles and to check into a facility instead.

His family awaits the results of an autopsy and toxicology test conducted by the Mexican government.

On Saturday his closest family and friends reminisced the businessman’s life of success.

Mellon was born in New York City into one of the oldest banking families, descending from of Mellon Bank founder Judge Thomas Mellon and American banker and Drexel University founder Anthony Joseph Drexel.

He was raised between Delray Beach, Florida and Northeast Harbor, Maine and inherited a cool $25million when he turned 21, according to Vanity Fair.

After attending The University of Pennsylvania’s Wharton School he led prosperous careers in fashion, telecommunications, and finance.

Mellon also served as the chairman of the finance committee of the Republican Party in New York for a period of time.

He added to his wealth with his crypto-currency career by buying and selling Bitcoin.

In May 2015 he became Global Ambassador of Ripple Labs and invested $2million in XRP coin, which grew into a $1billion fortune.

However in light of his death his family is scrambling to find his crypto-currency fortune that has seemingly ‘disappeared’, according to a family friend.

‘Something weird has happened to all his crypto money and his family can’t find it,’ they said.

A source close to the family says Mellon was allegedly ‘burning $7million a month’ around the time of his death and asked his banker to help him budget down to a ‘$2million a month’ lifestyle.

A look into his history grappling with drug addiction offers insight into how he spent some of his fortune.

At first he battled a cocaine addition that later spiraled into OxyContin. 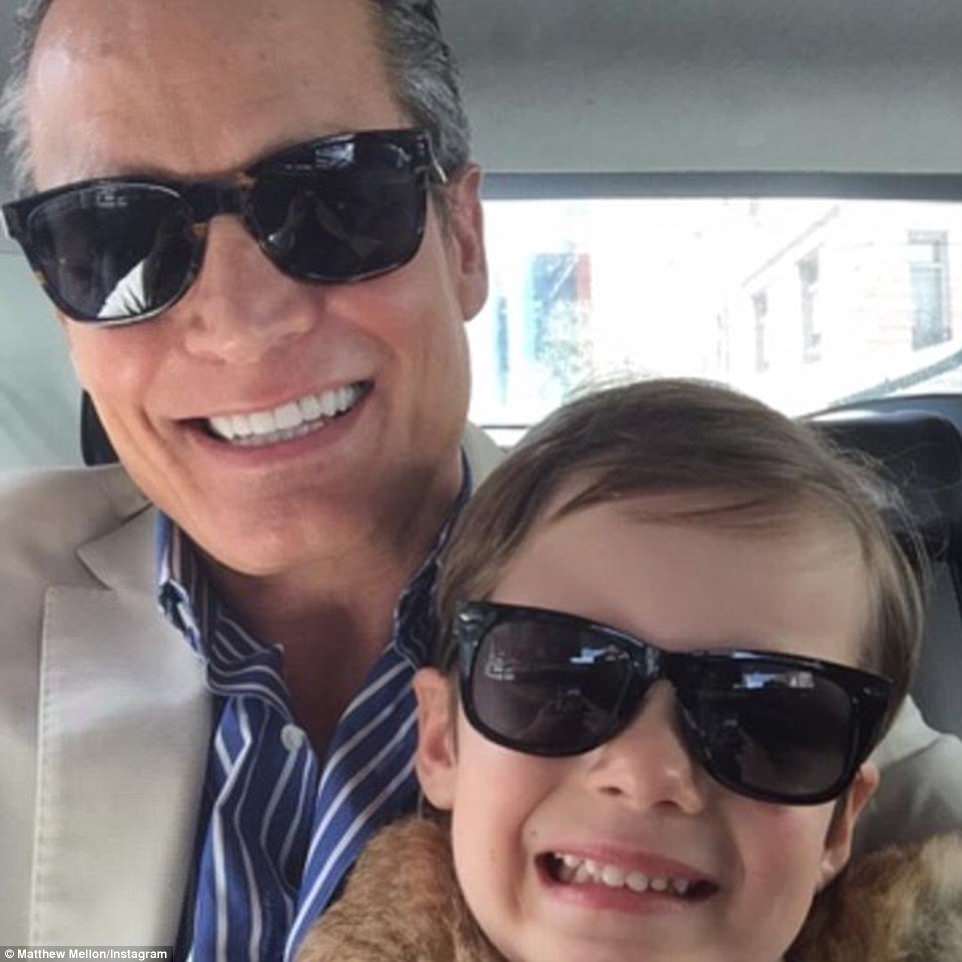 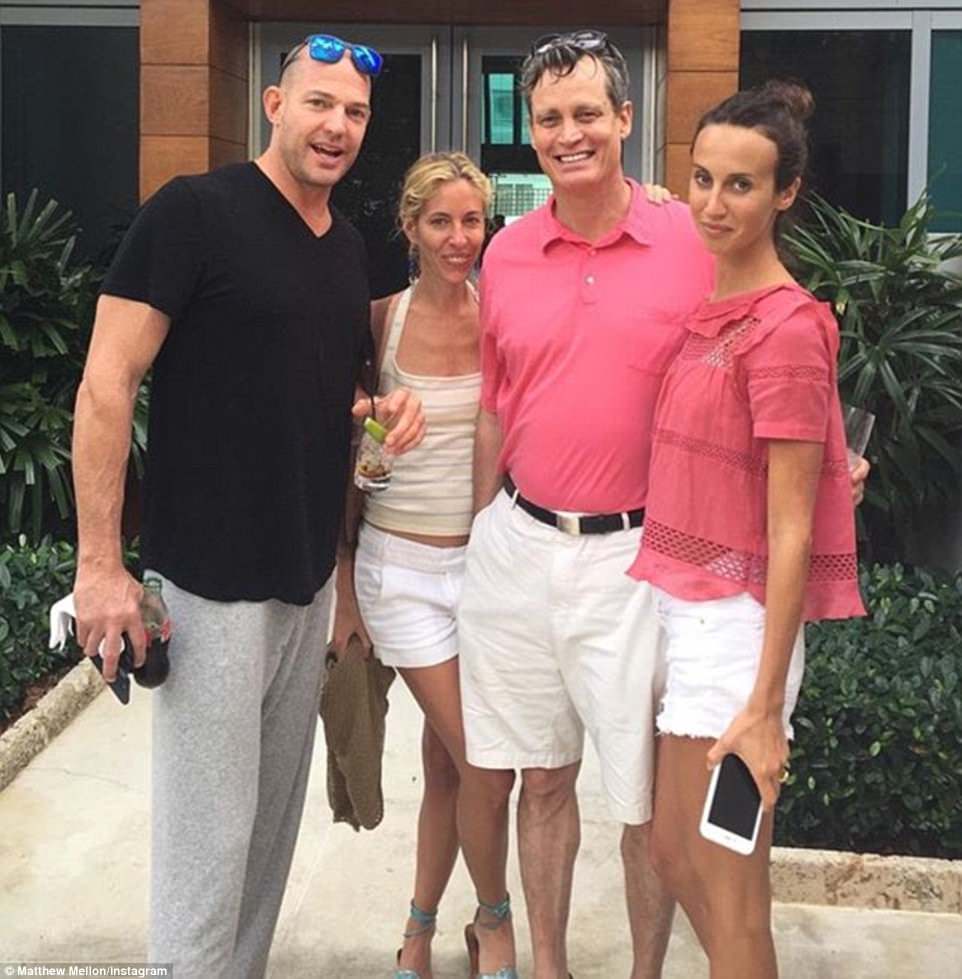 Mellon, in pink, pictured above with his second wife Nicole Hanley, second left 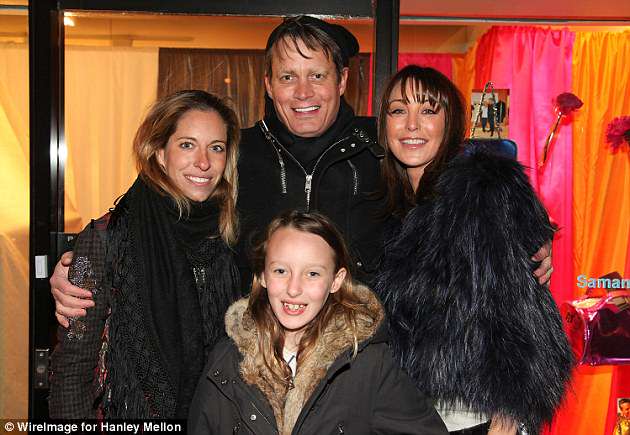 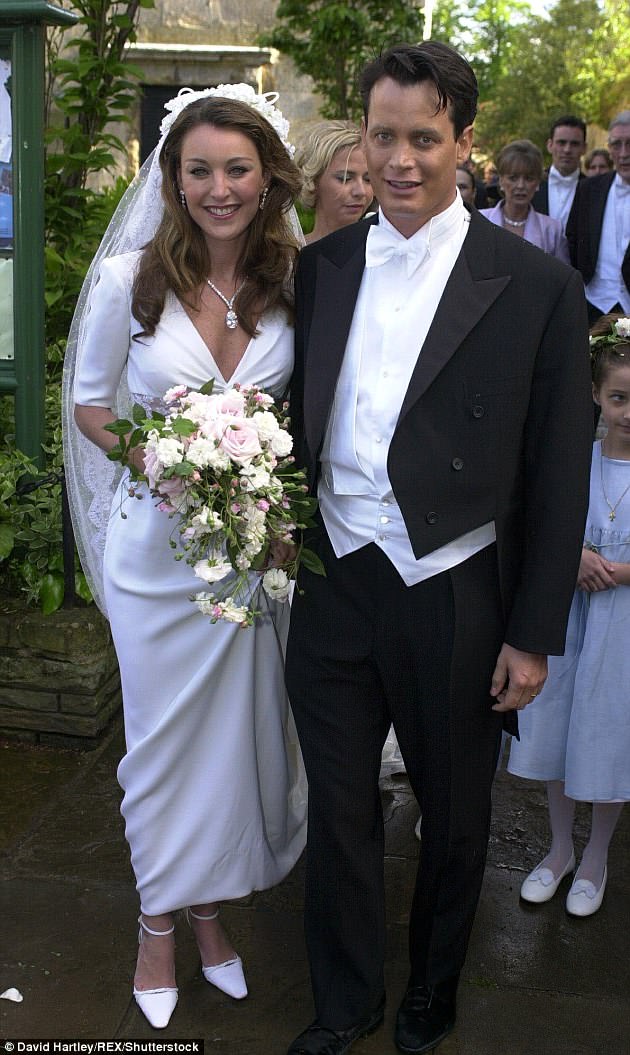 Matthew is pictured with his first wife Tamara at their wedding in the UK in 2000, which was attended by Hugh Grant and Liz Hurley

Mellon blamed doctors for his addiction, saying they were ‘writing prescriptions like they were Smarties’.

His death came as a shock for his family and loved ones.

‘He was sober and they were enjoying life. Then all of a sudden he apparently fell off the wagon,’ Kennedy’s agent Christine Schott, who spoke to Kick after the news of Mellon’s death, told People.

A source close to Mellon told DailyMail.com that the billionaire relapsed five days before his death.

Mellon is survived by his first wife Tamara Mellon – who is the co-founder of Jimmy Choo – and his second wife, fashion designer Nicole Hanley. He also has three children – one with Tamara and two with Nicole.

He met his first wife Tamara in 1998 at a Narcotics Anonymous meeting and they tied in the knot in a lavish wedding held at the birthplace of Winston Churchill, attended by glamorous guests including Hugh Grant and Liz Hurley in 2000.

They share a daughter named Araminta Mellon together and split in 2005.

In 2006 met second wife Nicole after meeting her at a wedding and they wed two years later at family friend Diane Von Furstenberg’s home in the Bahamas. The pair later divorced in 2016.

They share two children Force and Olympia and started their own fashion company Hanley-Mellon.

His latest romance with Kennedy was short but sweet as the couple met a few years ago at a charity event in New York City and spent several months travelling around Europe and the US prior to his death.

On April 20 Kennedy shared a touching video and tribute to Mellon on her Instagram page.

The video sees the two dance together as her caption described him as ‘magical’. 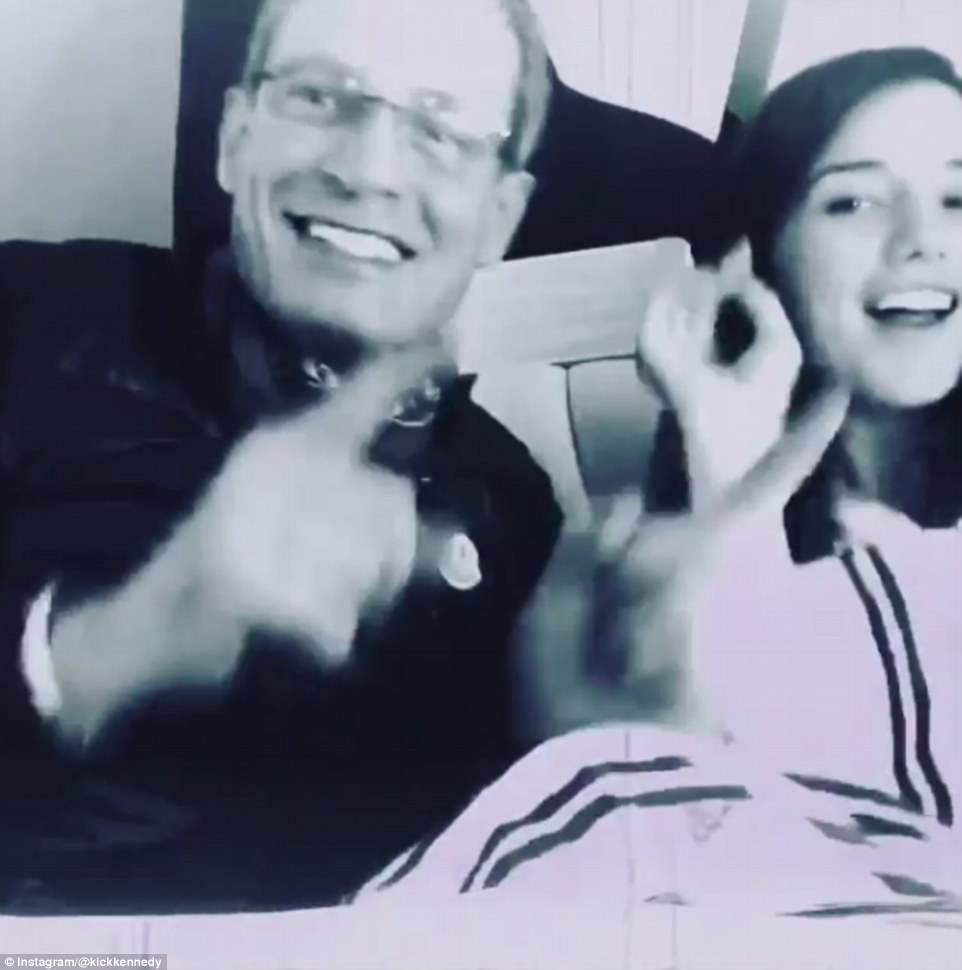 Robert F. Kennedy Jr.’s daughter Kick Kennedy, 30, shared a touching video and tribute to billionaire banking heir Matthew Mellon, 54, who she was said to be dating before his shock death in Mexico on April 16 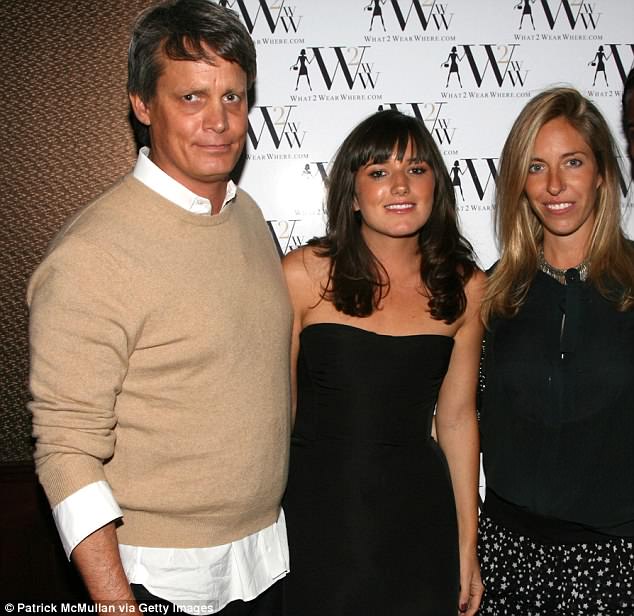 Back in the day: The two were first introduced years ago at a New York City charity event but had only been dating for the past four months a source told DailyMail.com (Mellon, Kennedy and Mellon’s second wife Nicole Hanley in 2010) 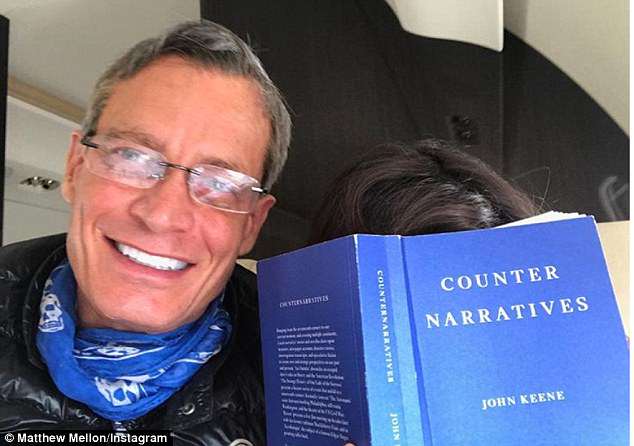 Hiding out: It was Kennedy who suggested Mellon check into rehab when he relapsed five days before his death said the source (Mellon in a photo he posted to Instagram on March 25 with a young woman who appears to be Kennedy) 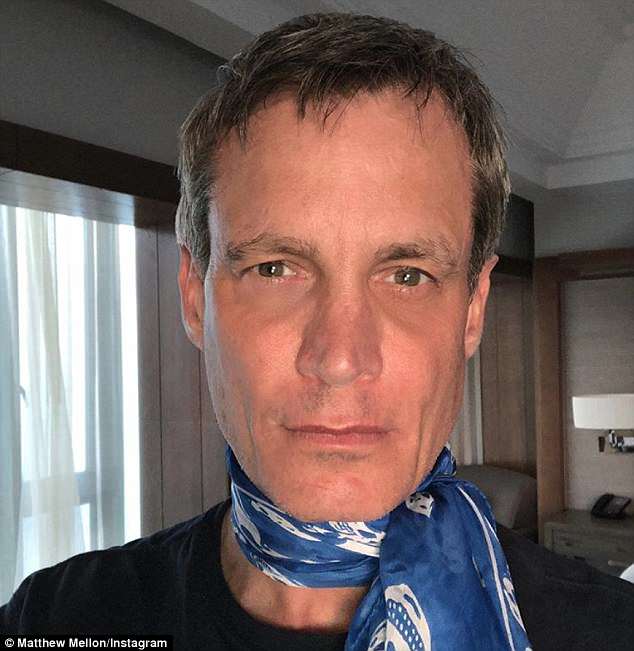 Mellon, who struggled with drug addiction during his adult life, had been due to check into the Clear Sky Recovery rehabilitation clinic on the same day he was found dead in a hotel room 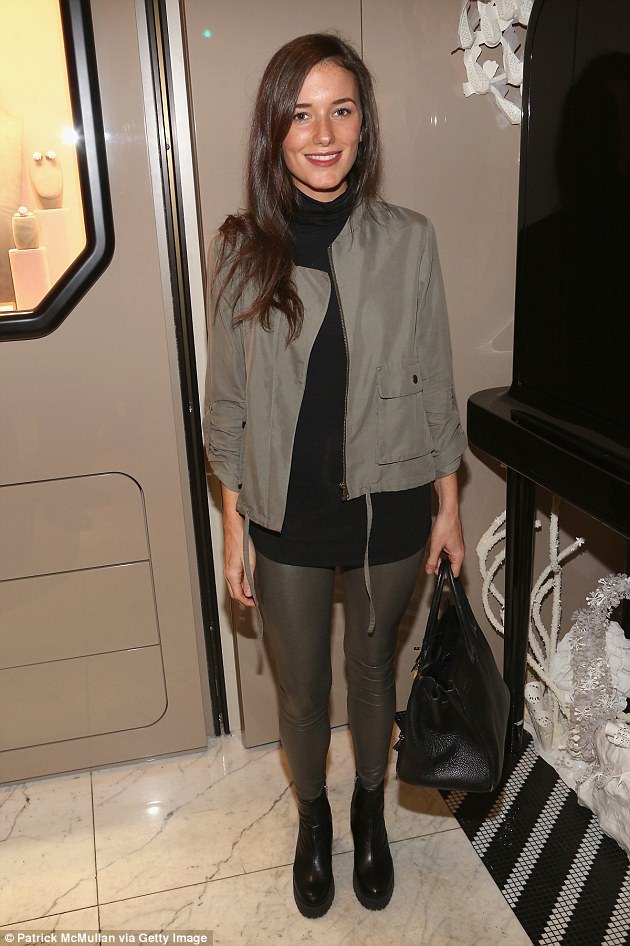 Kennedy, 30, was said to be dating the 54-year-old in the months leading up to his death on April 16 in Cancun. She is pictured above in New York last November

‘Most who knew Matthew knew he had an incredible way of manifesting wildly unpredictable miracles that shocked and awed us all. Simply, he was magical,’ she wrote

‘We also couldn’t really understand what he was ever talking about, almost ever. He had a way of moving around quickly and mumbling and then all of the sudden saying something completely insightful.

‘I remember him turning to me once and saying ‘Don’t let the fear of losing be greater than the excitement of winning’ before going back to the usual topics (UFOs….!!! Human cloning…!!!). It was hard not to be completely under his spell.’

Kennedy went on to say that Mellon loved his friends and described his two ex-wives, Tamara and Nicole, as the ‘loves of his life’.

She added that he adored his three children – Minty, Force, and Olympia – saying that they would inherit his charm, wisdom and ‘spectacularly bizarre wardrobe’.

‘He was the most generous and fabulous person I have ever met and really only cared about how everyone else was feeling,’ she said.

‘Thank you MM for taking us all on the fun and captivating adventure that was your life, as you would say, in ‘M E L L O N S T Y L E’.’