A family was amazed to discover an intact World War II air raid shelter hidden beneath tons of rubble in their back garden.

Kelly and Sean Webb found the 80-year-old Anderson shelter after clearing out a mass of rocks and weeds with a mini digger at their detached house in Ashford, Kent, which was built in the 1930s.

Millions of shelters made from corrugated steel were handed out to families between 1939 and 1945 to protect them against German bombs.

But the Webb’s shelter was found encased in concrete – which is unusual – and local historians believe it may mean it was converted into a garden shed by a previous owner.

The family, who have lived in the house for three years, watched in amazement as workmen lifted away soil and rubble was lifted away to reveal the shelter.

Kelly Webb, pictured with son Riley, four, was stunned to discover a World War II Anderson shelter, pictured, in the back garden of her home in Ashford, Kent, after it was found beneath a pile of rubble when she and her husband Sean decided to carry out some renovations at the property 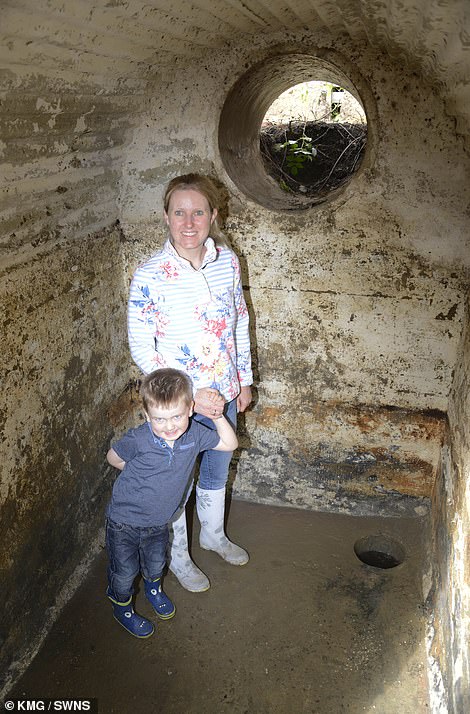 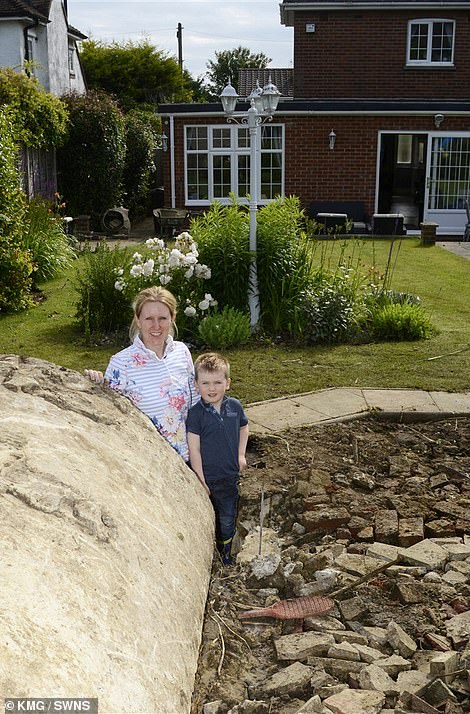 Unusually, the structure was encased in concrete, which the curator of Ashford Museum believes means it was converted into a garden shed by its previous owner. The Webb family have lived in the home for three years but were completely amazed to discover the structure in the back garden 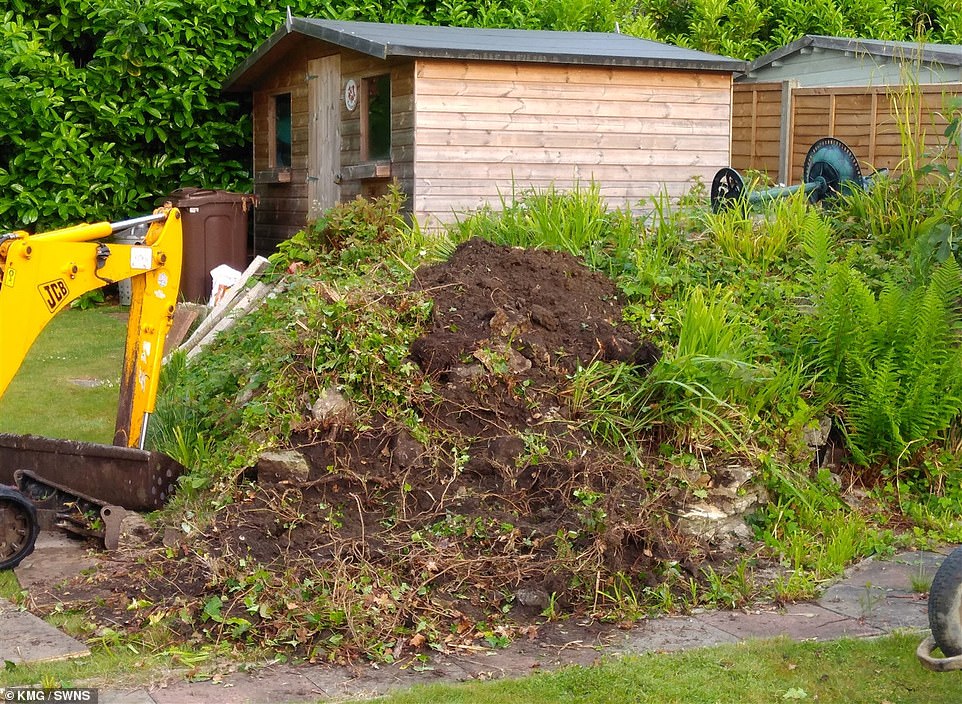 The shelter was buried beneath tons of dirt and weeds, pictured, that was cleared out by a mini digger after the Webbs hired workmen to renovate their garden. Mrs Webb said they plan to keep the shelter so it can be used as a hideaway for her son Riley and stepson Daniel, 17

Mrs Webb, 41, said: ‘It was exciting to see such a big concrete structure emerge at ground level and to see the steps to the shelter exposed after all the soil was removed.

‘It’s a piece of history and it makes you wonder why the shelter was covered in concrete and if it was used by more than one household in the street.

‘The shelter was connected to an electricity supply, which was all degraded and even had the old Bakelite switches inside.’

The IT project manager added: ‘I was expecting to have a nice piece of flat lawn there.’

She plans to keep the Anderson shelter for her son Riley, four, and stepson Daniel, 17, to use either as a play den or a teenage hideaway.

She said: ‘I’m thinking of putting benches in the shelter, but I don’t think I will go as far as getting the electricity restored. 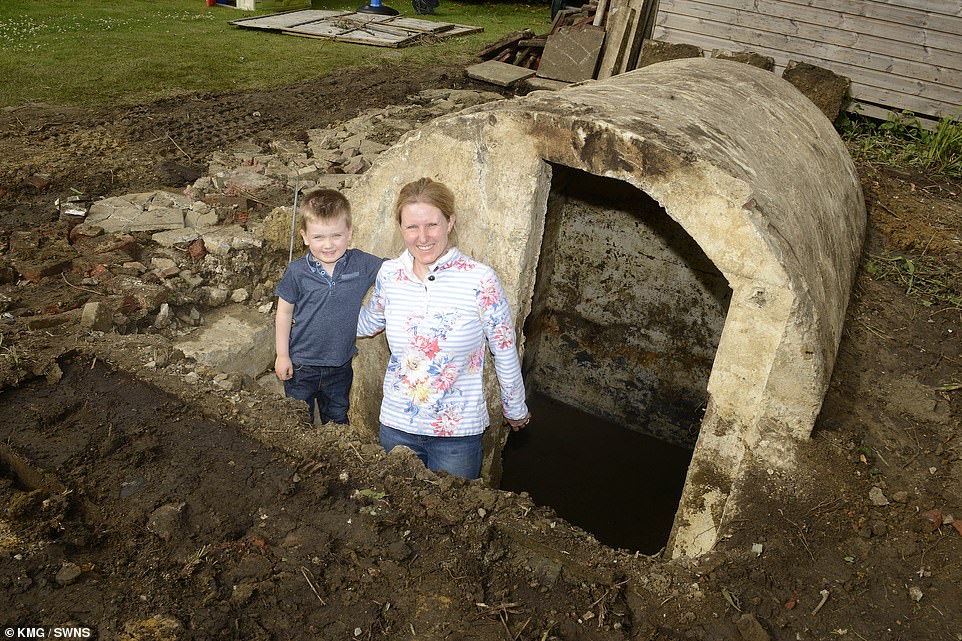 Mrs Webb, pictured with Riley at the shelter after it was uncovered, said she was expecting to find some flat lawn. She also plans to install some benches and connect the electricity supply to the structure, and then make it a feature of the garden 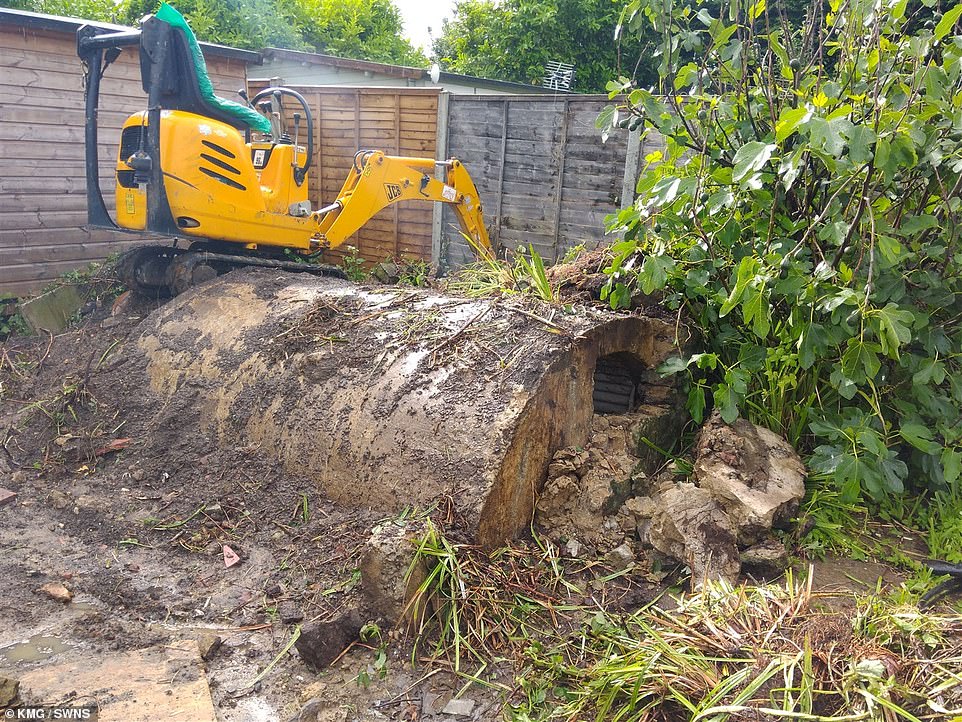 Most Anderson shelters were buried four feet below ground and were named after Sir John Anderson, then Lord Privy Seal who was responsible for preparations against air-raids. Around 3.6million were distributed throughout the war, with low-earning families given them for free while higher earners had to pay £7

‘I’d like to keep it and it can just be landscaped into the garden.’

Mrs Webb said the shelter was a reminder of the constant threat that families lived under during the Second World War.

She added: ‘The way we live now you can’t imagine how people used to exist with doodlebugs flying overhead and having to rush into their garden shelters.’

Ashford was heavily bombed in World War II and the centre of town was devastated on March 24, 1943, during a massive raid that killed 54 people and injured more than 200.

The town was the worst-hit in Kent during the war and that raid also flattened a primary school, although all the children had safely made their way to shelters.

Ian Sharp, the curator of Ashford Museum, said the town centre was a target for German bombs as Howitzer field guns had been positioned at the town’s railway works.

He said: ‘Most Anderson shelters were put over a hole in the garden that was dug around four feet deep with steps down.

‘It was usual for the corrugated roof to be covered in sandbags and soil.’

He added: ‘If a shelter had concrete around it then it’s possible it may have been used later on as a garden shed.’

Anderson shelters: The 6ft high steel structures used to protect millions of people during The Blitz of WWII

Anderson shelters were designed by William Paterson and Oscar Kerrison in 1938 after the Home Office requested air raid protection amid concern over German aggression.

They were made out of 14 corrugated steel panels and named after Sir John Anderson, then Lord Privy Seal who was responsible for preparations against air-raids.

Shelters began being issued in February 1939 and around 3.6million were given out by the end of the war. 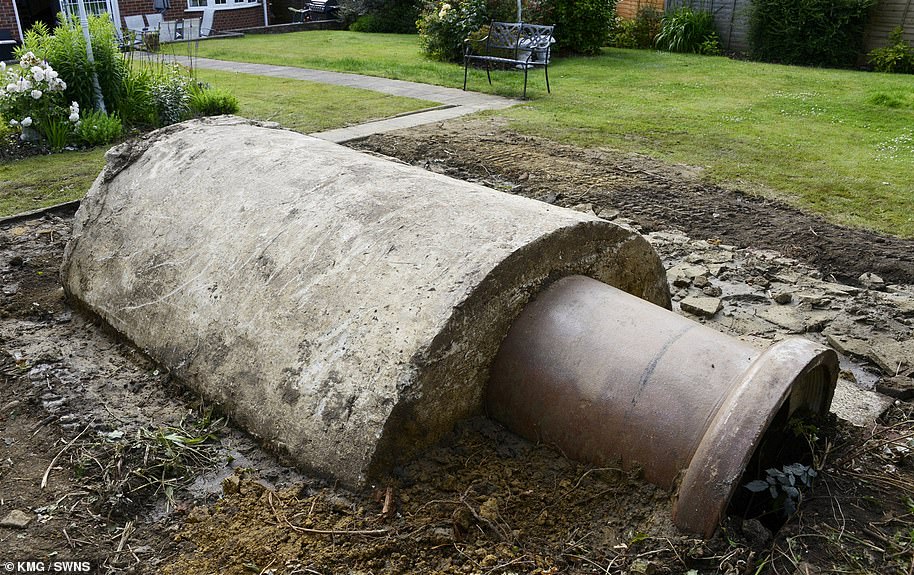 Anderson shelters were handed out in their millions to Brits during the Second World War and were effective at absorbing shocks from explosions. They did become a flood risk in wet weather, however, leading to the development of indoor shelters. Pictured is the Webb’s shelter in Ashford, which was heavily bombed during the war due to Howitzer field guns that were stationed near its railway works

Families on low incomes were provided them for free, while higher earners had to pay £7 for them.

The shelters were 6ft high, 4.5ft wide, and 6.5ft long. They were either buried 4ft deep in the soil and then covered with a minimum of 15ins of soil above the roof or in some cases installed inside people’s houses and covered with sandbags.

The design of the shelters meant they were effective at absorbing impact from blast and ground shocks, but they were also problematic because those buried in the ground often flooded in rainy weather.

After the war, they became a target for thieves because of the valuable metal, while the government also began reclaiming them to repossess the steel.

Families were allowed to buy their shelter and many survived after the war in use as sheds and storage space.