A woman returned home to a blood-soaked scene after her beloved dog suffered horrific injuries while fighting off an intruder.

Baz the Staffy was alone at his owner Sarah Greenway’s home in Wynnum, Brisbane, on June 19 when the would-be thief used a crowbar to break-in through a window.

Police believe the intruder hit Baz in the face with the crowbar when the dog jumped into action to protect the home.

The Staffordshire Bull Terrier was struck with such force it detached the gum from his jaw.

Mrs Greenway returned home to find pools of blood around the house and Baz was nowhere to be found.

The Staffy had become disoriented and wandered away before being discovered by a neighbour who took him to a nearby vet.

Mrs Greenway said the vet told her Baz sustained significant injuries and his first surgery round of surgery cost more than $2,000.

The family dog requires further surgery to repair the damage to his mouth.

A GoFundMe has been set-up to support his recovery.

‘Baz has antibiotics and pain relief that I give him every day and is doing okay,’ Mrs Greenway said.

‘He’s still pretty sad and shaken up and appears to be on edge every time there’s a noise but otherwise he’s doing great and getting lots of love.’

Mrs Greenway said it’s a daily struggle seeing her dog in such pain.

‘It breaks my heart everyday watching him struggle to eat, or even when he yawns and all his front teeth are gone, small things I notice,’ she continued.

‘I cannot believe someone did this to him and he has to live with it forever. I just hope the police catch them.’

Mrs Greenway said she hopes Baz’s next surgery will be this week.

She’ll continue to give updates on his recovery. 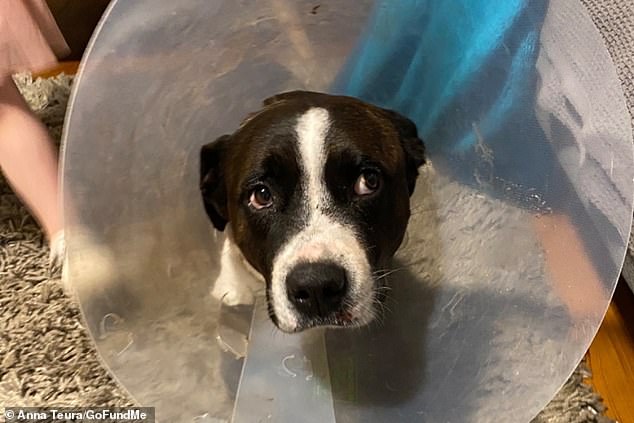 The intruder hit Baz (pictured) in the face with the crowbar as the Staffy fought him off. The blow left the beloved dog with serious injuries to his mouth and teeth which require multiple surgeries to repair