A family friend of a woman who was allegedly burned to death at her home by her ex-husband has revealed their shattering visit to her young children.

Kelly Wilkinson, 27, was found dead in the backyard of her home in Arundel on the Gold Coast about 6.40am on April 20, having suffered severe burns.

Her ex-husband Brian Earl Johnston, a former corporal in the US military, has been charged with her murder – accused of setting Ms Wilkinson alight – and breaching a domestic violence order.

Ms Wilkinson’s three children, who are all aged under nine, were in the home at the time she was allegedly attacked.

The youngsters are currently staying at the home of Ms Wilkinson’s sister Danielle Carroll, where the living room has been converted into a sleeping space. 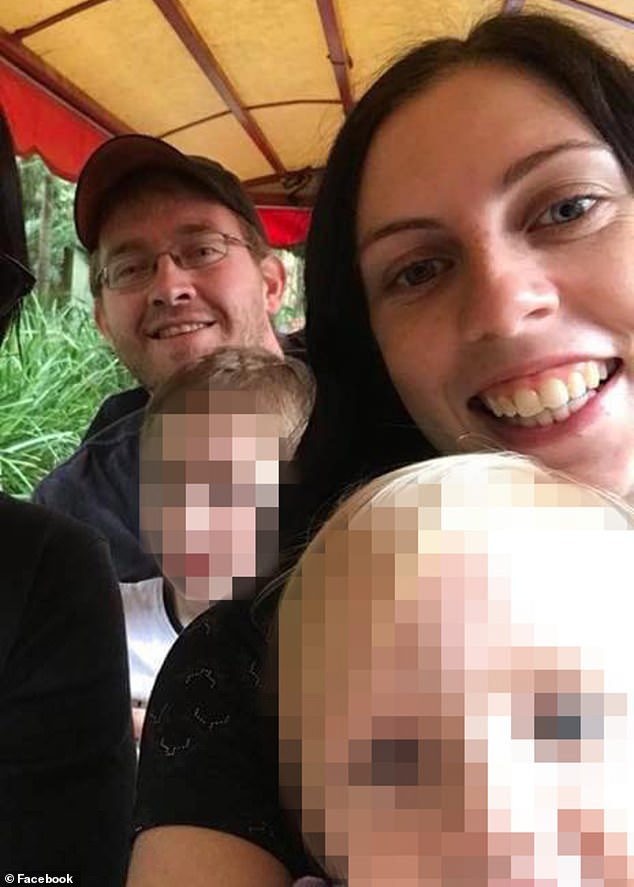 A family friend of Kelly Wilkinson, who was allegedly burned to death by her husband, is campaigning to build a new home for her three young children 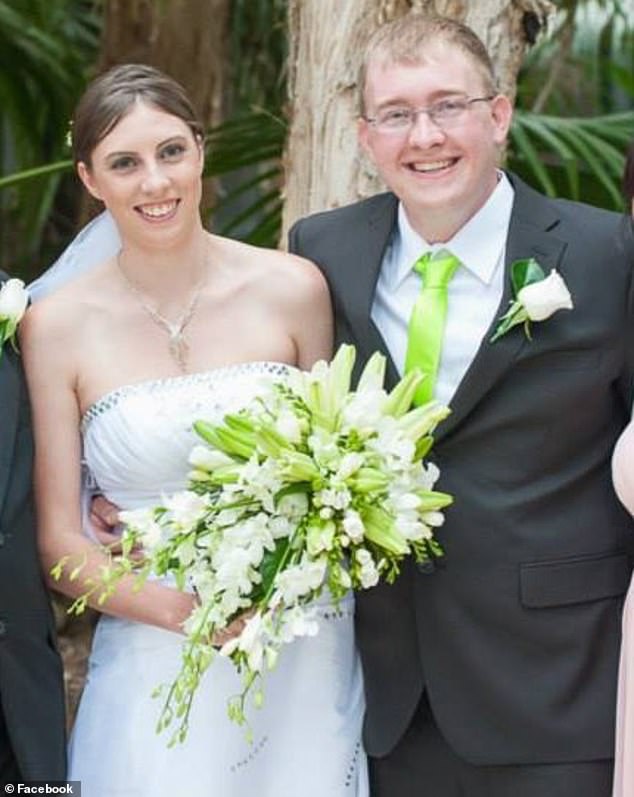 Brian Johnston, 34, has been charged with the murder of Ms Wilkinson on April 20. They are pictured on their wedding day

Ms Carroll’s husband is the stepbrother of businesswoman Tamika Smith, who has launched a campaign to build a home on the Gold Coast for the three children.

Ms Smith said she was motivated to organise construction of the home after a heartbreaking visit to see the children this week.

‘Walking in last night, I was there for probably five minutes and this little two-year-old grabbed my hand and called me “mummy” and she’s just so confused,’ Ms Smith told the Gold Coast Bulletin.

‘You’ve got a two-year-old looking for her mum. We don’t have the answers as to why she’s not here, which is why I go “How do we give these children any faith in humanity, how do we show them that there are good people when they’ve experienced so much heartache at the age of two?”‘

‘As a nation I feel like we walked away from their mum, so what are we doing to support the kids so we don’t walk away from them?’. 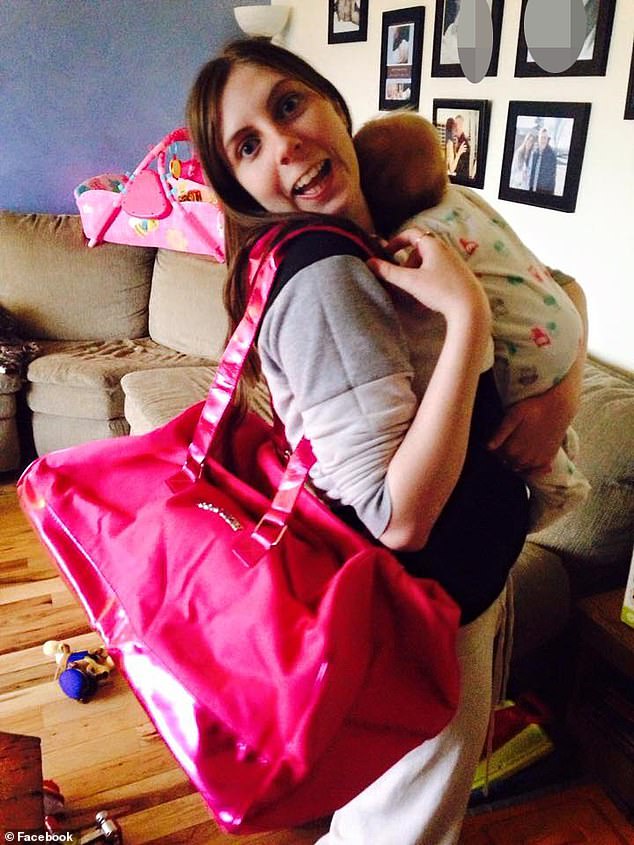 Ms Wilkinson was found dead in the backyard of her home in Arundel on the Gold Coast about 6.40am on April 20 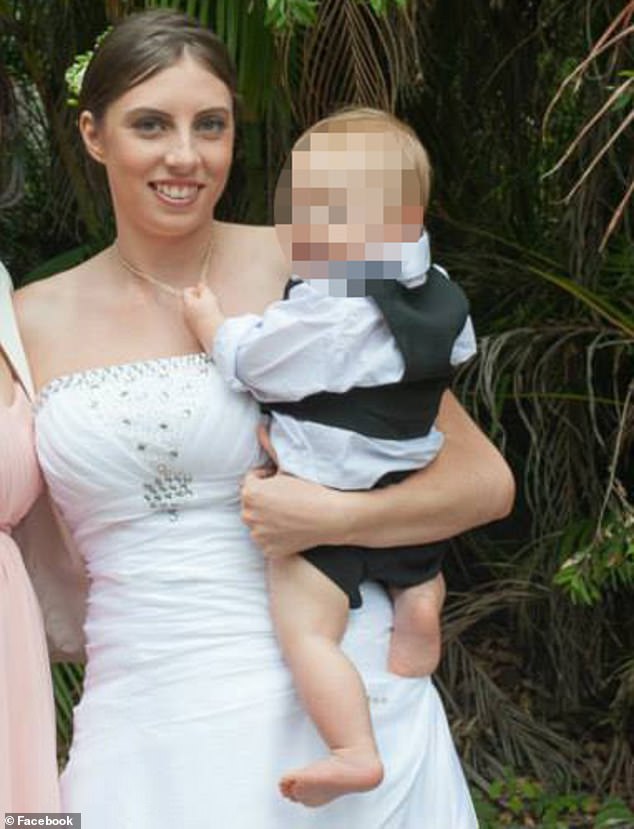 Mr Codd’s remarks came amid community anger over claims Ms Wilkinson and her family had gone to police on several occasions.

Asked if there were systematic issues in the police service, Mr Codd said her death was ‘ultimately a failure’ and that the matter was being reviewed.

‘A woman has died. She has been killed, we will allege, in horrific circumstances. We’re certainly going to make sure we look to improve… and correct any parts of the system that we control,’ he said.

Johnston was taken to hospital, where he was held under police guard, and remains in an induced coma. He was charged and his case made a brief appearance in court last week.

He was formally refused bail with his case to return to court at a later date. 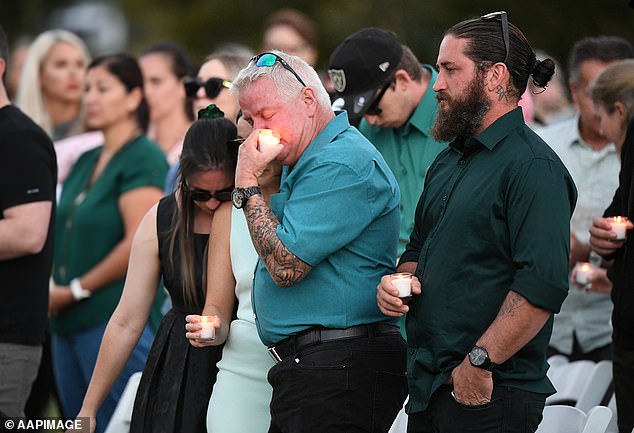 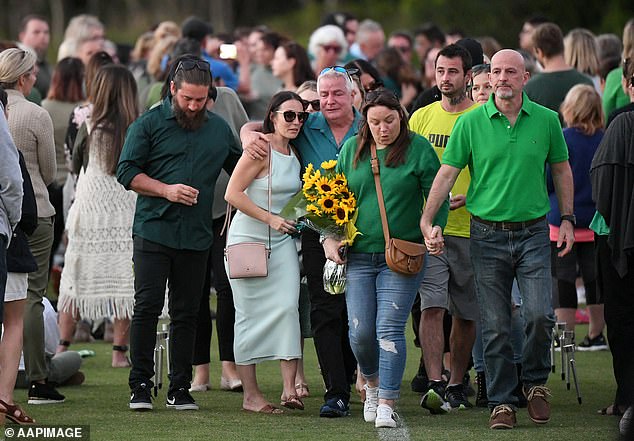 More than 1000 locals turned out to pay tribute to Ms Wilkinson, many wearing green, her favourite colour

Some people brought inflatable green balloons which were released at the end of the vigil, while others carried sunflowers – Ms Wilkinson’s favourite flower.

As a guitarist played acoustic versions of Ed Sheeran’s ‘Perfect’ and Coldplay’s ‘Fix You’, Ms Wilkinson’s family arrived and made their way to a row of white chairs at the front, her father Reg in tears as he trailed his daughters Natalie and Emma, his arm around daughter Danielle.