McKellen guest starred as Dr Cecil Pritchfield, who was called in to counsel Stewie after he did something terrible to a preschool classmate.

During his conversation with Pritchfield, Stewie revealed his ‘real’ voice, which is not actually British. He’s been faking it this whole time.

Family Guy revealed a shocking truth to the show’s fans in Sunday’s episode that saw Stewie Griffin visit a child psychologist (left) voiced by Ian McKellan. During the session Stewie reveals that his accent is actually fake

Gary Janetti, who wrote Sunday’s episode, ‘Send in Stewie, Please,’ told The Daily Beast that Stewie’s fake accent was something they just decided.

‘It wasn’t anything that was planned at all in any form,’ Janetti said.

The episode, which aired on Fox without commercial interruption, also directly acknowledged Stewie’s sexuality for the first time.

But Stewie didn’t end up coming out to the psychologist.

Janetti explained that rather than revealing whether Stewie’s gay or not, the writers want the audience to understand the journey that Stewie still needs to go on.

‘Stewie’s extremely intelligent. When he walks into the room, within a second he identifies that therapist as gay. And the way he acknowledges that is when he says to him that this isn’t a coming out session and I’m sure you lick your chomps every time you get one of those,’ Janetti told the Daily Beast. 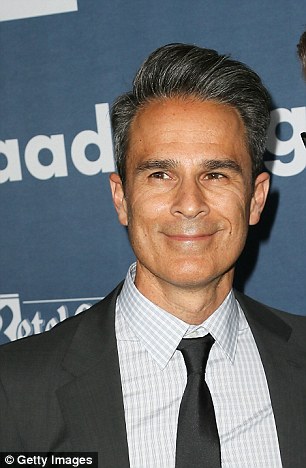 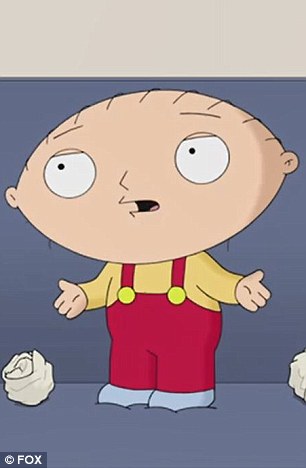 Gary Janetti (left), who wrote Sunday’s episode, ‘Send in Stewie, Please,’ said that Stewie’s fake accent was something they just decided on. The episode also directly acknowledged Stewie’s sexuality for the first time, but Stewie didn’t come out of the closet

Janetti said he believes that dialogue was Stewie’s way of bringing up the subject.

‘I’m not being defensive, but… I think he’s seeing an opportunity to say, “This isn’t easy. What you think this is going to be, it’s not. It’s not as actualized.”‘

In 2009, the show’s creator, Seth MacFarlane, said they ‘had an episode that went all the way to the script phase in which Stewie does come out’.

‘But we decided it’s better to keep it vague, which makes more sense because he’s a 1-year-old,’ MacFarlane added.

And Stewie didn’t come out in Sunday’s episode either, but his sexuality was addressed in a more direct way.

‘I think it hasn’t been addressed in a different way. I think we’ve just gone deeper inside Stewie’s mind and his inner workings,’ Janetti said.