A family of 11 have been caught on a 120-mile trip from Manchester to Wales during the coronavirus lockdown.

Police stopped the three-car convoy, which was made up with people from three different households.

North Wales Police slammed the incident as ‘unbelievable’ after the family made their way to South Stack on Anglesey to enjoy the day together.

Wales still have strict lockdown rules in place, which state that people should only leave their home if they have ‘a reasonable excuse’.

The family’s three-car convey to South Stack on Anglesey, North Wales was described by officers as ‘unbelievable’

Visiting a beauty spot on the coast of Wales is not considered essential – with the public warned that meeting friends and family is not allowed during the lockdown.

Chief Officer for the North Wales Police Special Constabulary Mark Owen tweeted: ‘Unbelievable…. 11 people from Manchester travelling in three different cars thought it would be a good idea to have a day trip to South Stack.

‘One family but from different households. Each person prosecuted under Covid legislation @NWPSpecials #StayHomeSaveLives’

The family’s excursion comes days after police were forced to break up a 70-person rave in Telford, Shropshire.

Officers in Telford said they shut down a ‘mass gathering’ at the Granville Country Park on Saturday amid the coronavirus lockdown. 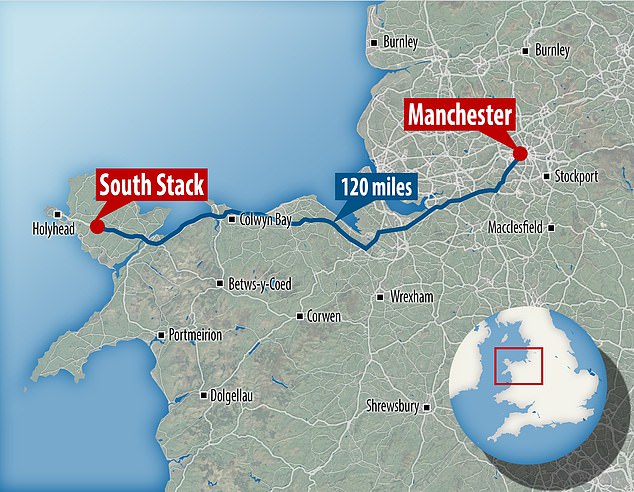 Meanwhile, Morecambe Police found ‘dozens’ of revellers from different households gathered together for a baby shower in a communal play area outside their homes last week.

The partygoers, who were set up with a buffet and a bouncy castle, became abusive towards officers when they arrived at the gathering, telling police it didn’t matter they were together because ‘schools were going back in June.’

The force said it first believed reports of ’30 people on the street having a baby shower’ were ‘exaggerated’ – but ‘on this occasion it was accurate.’