The parents of a girl with cystic fibrosis are considering moving to Scotland to get access to a medicine which could add decades to their daughter’s life.

Dave Louden, 34, is father to four-year-old Ayda, who has the lung-damaging disease but cannot get the life-extending drug Orkambi on the NHS in England.

The family live just 10 miles (16km) from the border, in Carlisle, and say they may have to shift their lives to protect Ayda’s health.

Orkambi is available on the NHS in Scotland but not in England, where health bosses and company executives are squabbling over the price of it.

Mr Louden said the government ‘cannot allow for a postcode lottery’ for the drug, which can significantly boost the lifespans of children with cystic fibrosis.

Dave Louden, father to four-year-old Ayda, is seriously considering moving his family to Scotland so his daughter can get a life-extending cystic fibrosis medication 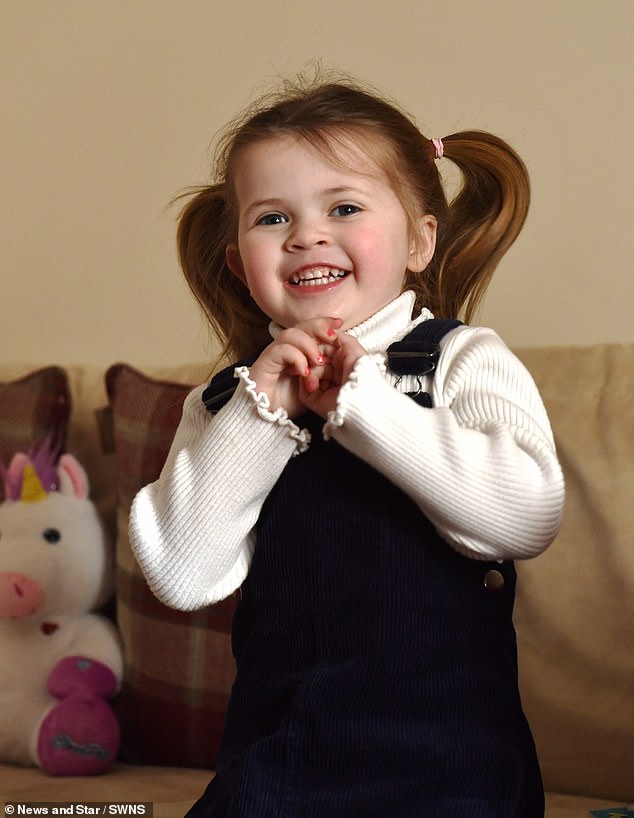 Ayda cannot get access to Orkambi – which slows down the lung damage caused by cystic fibrosis – because she lives in England, and without the drugs she may have a shorter life than if NHS England were able to prescribe it for her

‘It is heartbreaking and frustrating knowing these drugs are literally now so close, yet so far from Ayda herself having access to them,’ Mr Louden said.

Orkambi, which slows the lung damage which is so deadly to people with cystic fibrosis, is now available to around 350 patients in Scotland but none in England.

Mr Louden said his and other families in similar predicaments have to seriously consider moving north to get access to the lifeline for their children.

He said: ‘It would be a lot of change and upheaval, not only for Ayda, but for her brother Alfie and the rest of our family who we rely heavily on for support, but ultimately we may be left with no other option.

‘Ayda’s cystic fibrosis is a volatile condition, we are only too aware that it only takes one bad infection for these drugs to become her only lifeline.

‘We are lucky to have the advantage of living so close to the border and that making the switch for us would be easier than many other families across England, Wales and Northern Ireland who will also now be considering the move to Scotland.’

WHAT IS ORKAMBI AND WHO WOULD BENEFIT?

Orkambi can slow decline in lung function – the main cause of death among people with cystic fibrosis – by 42 per cent.

CF is a progressive, genetic disease that causes the mucus in various organs to become thick and sticky and trap bacteria.

It causes persistent lung infections and limits the ability to breathe over time, limiting the life expectancy to mid-40s.

There are almost 3,000 people in Great Britain who have two copies of the F508del mutation – around half of patients – that could benefit from Orkambi, according to the 2014 UK Cystic Fibrosis Registry Report.

Vertex refused an offer from NHS England of £500million for a five-year supply, the biggest offer it has ever made, and talks have completely broken down.

The drug is only ever prescribed on rare compassionate grounds, which many charities say is too late.

Cystic fibrosis is incurable and causes sticky mucous to build up in the lungs, making it difficult for patients to breathe.

It also affects the digestive system and damage worsens over time, leading to regular chest infections and difficulty absorbing nutrients from food, which limits growth and weight gain.

People with cystic fibrosis – about 10,500 patients in the UK and 30,000 in the US – are also more likely to get diabetes, weak bones, liver problems and infertility.

It’s a life-shortening disease and only around half of patients live beyond the age of 40. Orkambi, which slows down the lung damage, can add 20 years or more to this.

The Scottish Government has approved Orkambi, and a similar drug called Symkevi, for its own patients but English health bosses have refused, leaving the Louden family and others like them at arm’s length from a tried-and-tested medicine.

‘I’m over the moon that full access has been made available for all patients who can benefit from the two drugs in Scotland,’ Mr Louden said.

‘It’s the biggest leap forward yet that has come from the relentless campaigning of cystic fibrosis sufferers and desperate parents, family members, friends and the public.

‘Myself and my family must now seriously consider the move across the border to Scotland as these drugs are and will be a crucial factor in Ayda’s health.’

Mr Louden said other families like his are also considering the move because of the huge benefits Orkambi could have for their children.

The drug’s manufacturer, an American company called Vertex, has already turned down NHS England’s offer of £500million for a five-year supply of Orkambi.

This was the most the NHS had ever offered for a drug but was unsuccessful. 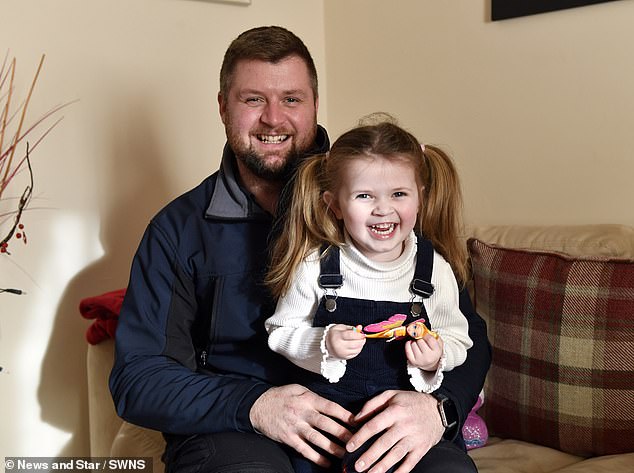 Mr Louden said moving his family across the border would be a strain on his other child, seven-year-old Alfie, and on members of their wider family 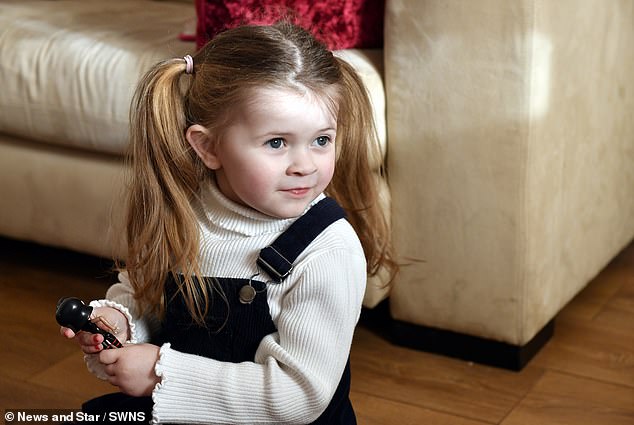 ‘It is heartbreaking and frustrating knowing these drugs are literally now so close, yet so far from Ayda herself having access to them,’ Mr Louden said

Mr Louden hopes the approval of the medicines for use in Scotland – which came about by the Parliament controversially overruling its medicines regulator – will reignite the fight in England.

‘I would much prefer a deal be struck with the NHS in England to prevent such drastic measures [as moving to Scotland] to have to be taken,’ he said.

‘At the very least, this is a defining point that if NHS England can still not strike a deal even when Scotland can, that they must now take the alternative measures of looking to import the generic version of these drugs.

‘They cannot allow for a postcode lottery between the home nations where some people with cystic fibrosis are treated and others are not.’

Forking out for the drugs in Scotland did not sit well with everyone, though, because politicians overruled the medicines approval board, the Scottish Medicines Consortium, which had earlier decided they were unaffordable.

A source in Whitehall said last week: ‘Putting politicians instead of clinicians in charge of which drugs should and shouldn’t be available leads to bad decisions and could lead to the NHS getting ripped off.’

Cystic fibrosis is caused by a faulty gene that a child inherits from both carrier parents.

The gene, known as the cystic fibrosis transmembrane conductance regulator (CFTR), is responsible for controlling the movement of water in and out of cells.

The fault leads to the mucus produced throughout the body becoming thick and building up in the lungs and digestive system.

Classic complications of the condition, which tend to present in infancy, include chronic infections, breathlessness, digestive problems and even infertility.

No cure currently exists and figures suggest half of sufferers will die before they’re 31.