Family rescued from flood that trapped their SUV in Arizona

Terrifying video captured the moment a family was rescued from atop their SUV after it was stranded in a flash flood in Arizona.

On Wednesday afternoon firefighters were called to rescue a man and his two daughters, one of whom was a baby, after their car got caught in a wash in Tucson.

It was one of several recent water rescues in the region where strong storms and flash floods are causing chaos across the Southwest.

Flooding, which is expected to continue throughout the weekend as the area continues to battle its monsoon season, has taken the lives of at least three individuals in the last month, with the most recent being a person who died on a Grand Canyon rafting trip on Thursday.

Crews are also facing clean-up after three people were injured during a train derailment resulting from flooded railways in Utah on Thursday night.

Officials remind citizens to avoid flooded streets and high waters as the rain continues to fall.

A father and his two daughters, one of whom is a baby, are rescued from the roof of their SUV after it was trapped by flash flooding in Tucson, Arizona 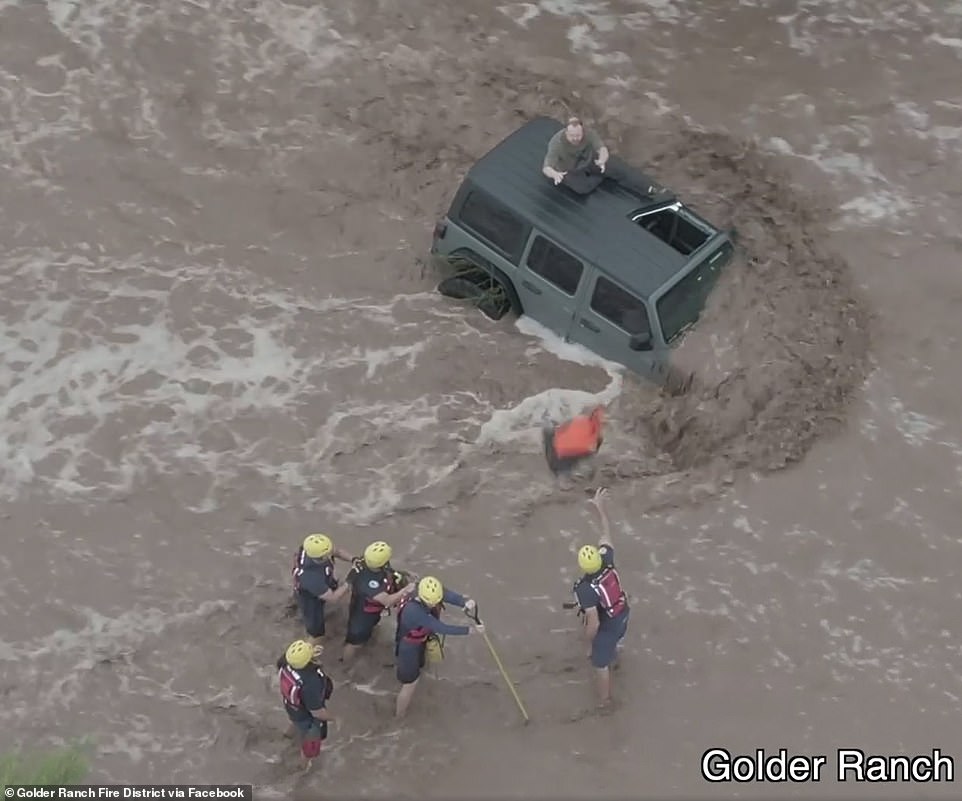 The water carried the family roughly 20 yards before rescuers could help them. Officials say all three passengers were rescued without injury

Golder Ranch Fire District spokesman Capt. Adam Jarrold told Tucson.com that the family in the rescue video was traveling eastbound when their vehicle was swept by fast moving waters.

The water carried the family roughly 20 yards before rescuers could help them.

Rescuers say the family exited their SUV through the vehicle’s sunroof. Video shows firefighters helping the children and father off of the roof, one-by-one, and carefully walking each person to dry land.

According to Tucson.com, all three passengers were rescued without injury. It is unclear at this time what the extent of damage to the SUV is.

Now, Jarrold is issuing a message to all residents as the threat of strong storms lingers.

‘Our message, telling everybody, be patient, especially here in the desert,’ he said. ‘The water comes up quick, but it also goes away quick.’

The derailment occurred near the town of Lund at 10.10pm Thursday after heavy rain fell throughout southern Utah earlier that day. Much of the area was under a flash flood watch.

Officials believe water had been covering the tracks before the locomotive fell off the railway and landed on its side. 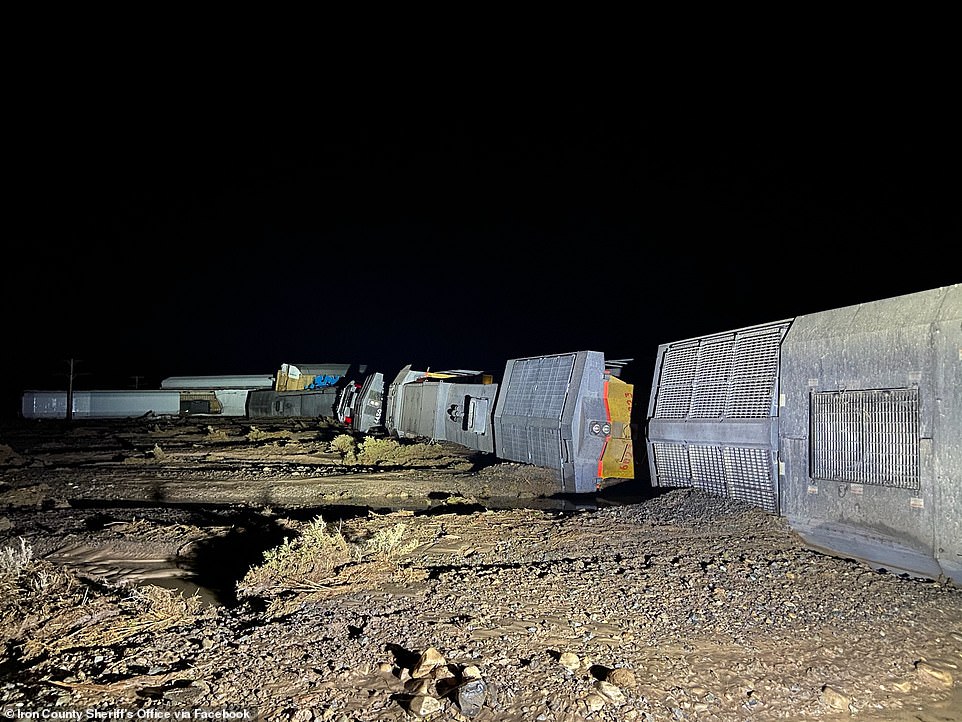 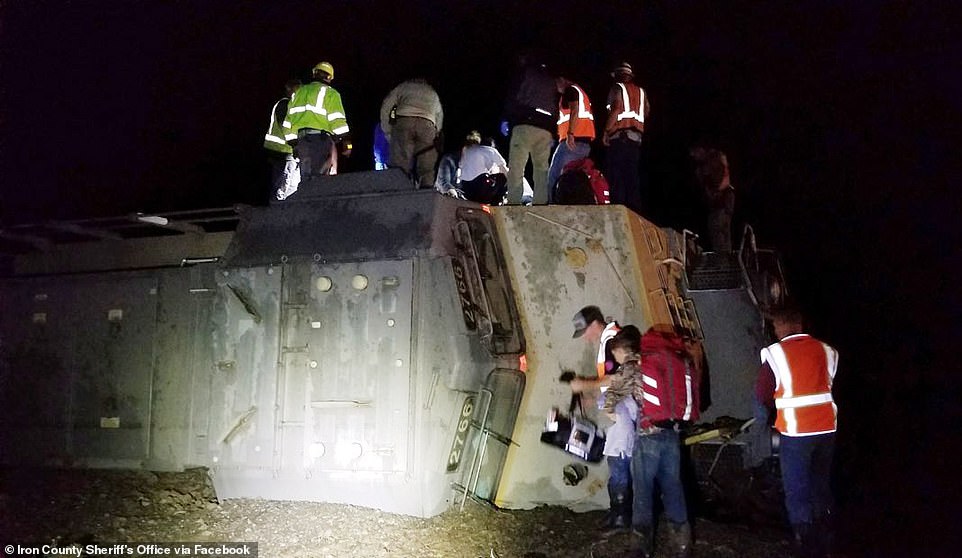 The derailment (above) occurred near the town of Lund at 10.10pm Thursday after heavy rain fell throughout southern Utah earlier that day. Officials believe water had been covering the tracks before the locomotive fell off the railway and landed on its side 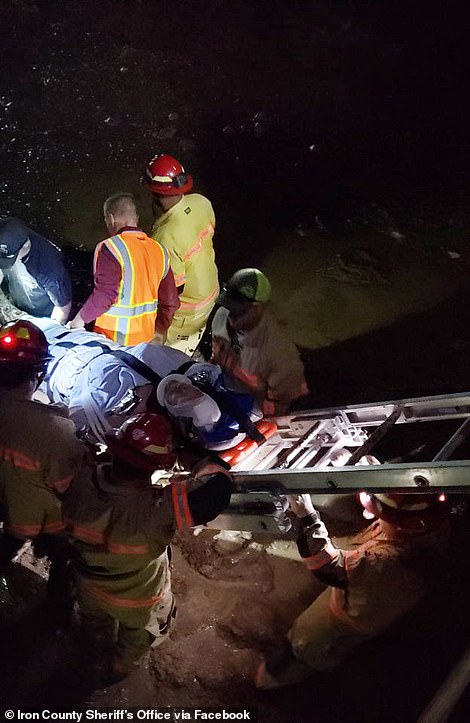 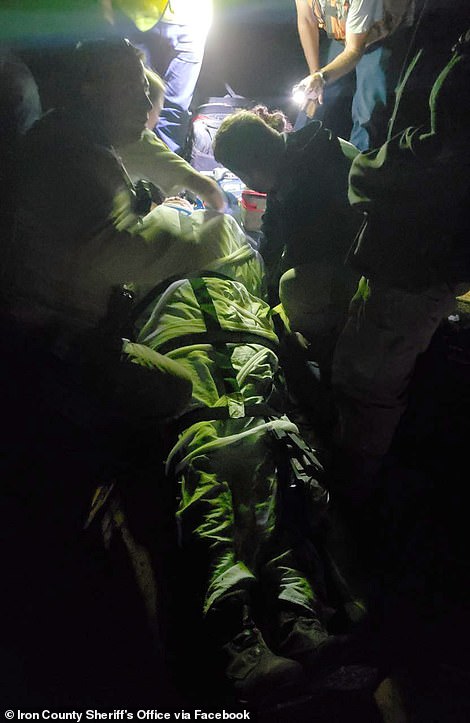 The three people occupying the train were injured during the incident, but are currently in stable condition. Police say the train was carrying approximately 95 cars with unknown cargo/freight

The three people occupying the train were injured during the incident, but able to exit and get on the locomotive’s upper side.

However, due to the rising waters, they were not able to evacuate off the top of the derailed train. These same waters made it difficult for rescuers to reach the individuals.

Around 12.50am Friday, first responders were able to make contact with the victims and transfer them off of the train. They were taken to an area hospital for treatment and evaluation in stable condition.

Police say the train was carrying approximately 95 cars with unknown cargo/freight. The public is asked to avoid the area while crews work to remove the train.

The entire Southwest (Flagstaff, Ariz. on July 14 pictured above) has been hammered lately with storms and more rain is in the forecast as the area’s annual monsoon season 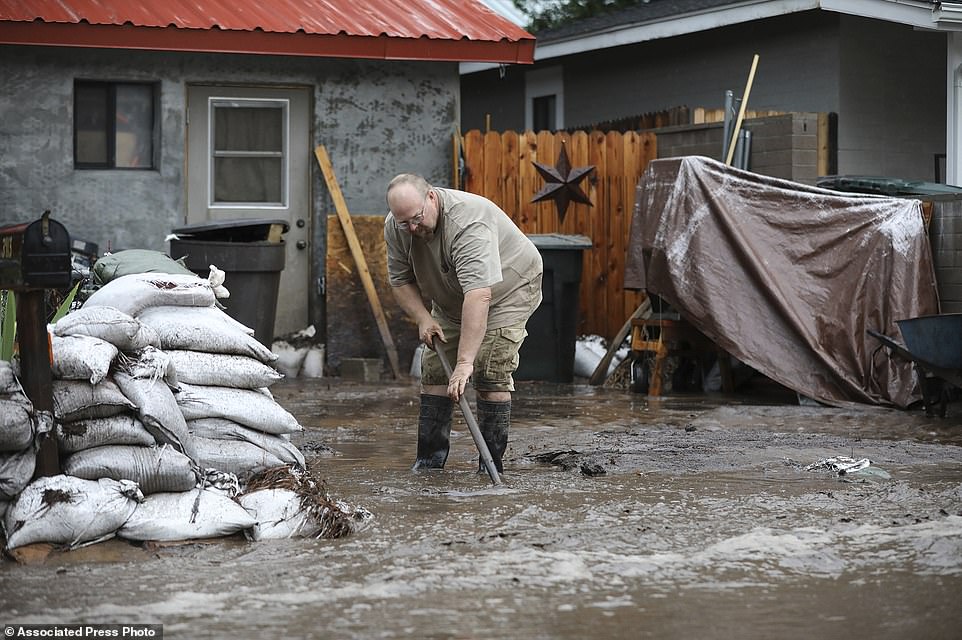 During this time the region (Flagstaff, Ariz. on July 14 pictured above) sees anywhere from 30 to 60-percent of its annual rainfall, which often results in floods and high waters.

At least one person has died as a result of the monsoon storms that inundated Arizona this week.

Officials say the individual who went missing from a Colorado River rafting trip in the Grand Canyon during the flash flooding was found dead in frigid waters on Thursday. A second person was found alive.

Authorities believe the pair was participating in a motorized trip operated by Arizona Raft Adventures that was scheduled to last more than a week when they were swept into the river.

According to Grand Canyon spokeswoman Joelle Baird, a torrent of water rushed through a slot canyon and washed away the camp where the two commercial rafts holding 30 passengers pulled off the river to stay Wednesday evening.

Rescuers found the deceased in the water neat text to the flooded, abandoned camp. The other individual was found nearby. 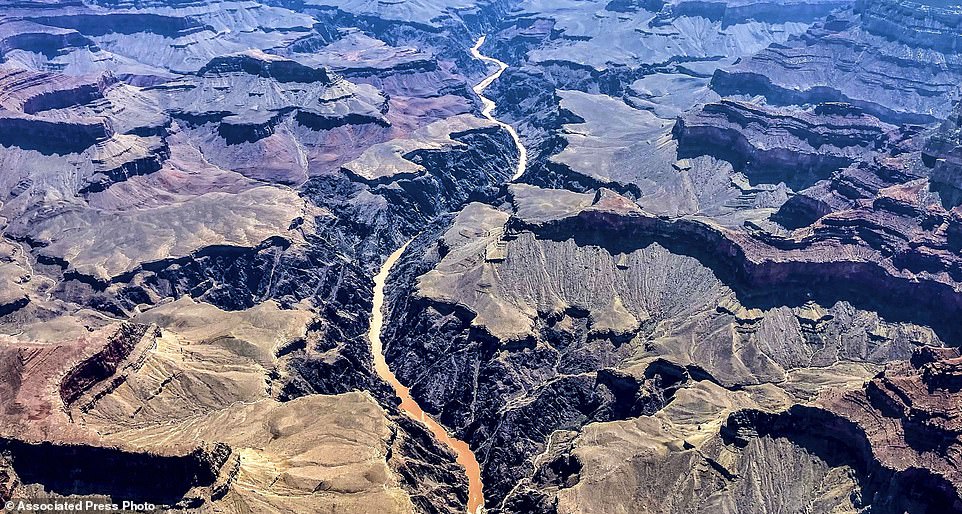 Officials say the monsoon storms that inundated Arizona this week resulted in the death of a rafter in the Grand Canyon (pictured is the Colorado River through the Grand Canyon on July 15). The rafter was found dead in frigid waters on Thursday after likely being swept into the river after a torrent of water rushed through a slot canyon

Two paramedics went into the river late Wednesday to treat and stabilize injured rafters after receiving a satellite phone call from someone on the trip asking for help. Seven passengers who were injured were airlifted out of the canyon. The extent of their injuries is unknown at this time.

Baird adds that park authorities will help other rafters who want to cut their trip short and get off the river.

John Dillon, the executive director of the Grand Canyon River Outfitters Association that represents the outfitters permitted in the canyon, says that while the outfitters were pleased to hear one rafter was found, they’re saddened by the death of the other.

‘Our hearts our broken that people on the trip lost somebody, people at home lost somebody,’ he shared. ‘That matters more than anything else.’ 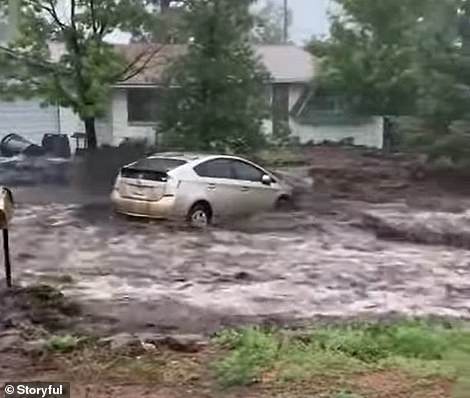 At least two other people have died this year on Grand Canyon rafting trips.

James Crocker, 63, of Colorado died after he fell into the river at the top of a rapid in June. Members of his private boating groups pulled him out of the water but couldn’t revive him.

Deborah Ellis, 60, of Idaho died after the commercial raft she was on hit rapids and flipped in late April. The autopsy report revealed that she drowned.

The entire Southwest has been hammered lately with storms and more rain is in the forecast as the area’s annual monsoon season, which runs from June through September, is underway.

During this time the area sees anywhere from 30 to 60-percent of its annual rainfall, which often results in floods and high waters.

In fact, video shared on social media by a resident of Flagstaff, Arizona’s Upper Greenlaw neighborhood, demonstrates how intense flooding in that area can get.

River-like waters are shown filling the residential streets, dragging dirt, debris and full-sized cars along with it.

‘This is the craziest flooding I’ve ever experienced in the city,’ Taylor Landy, of Greenlaw, said on Facebook.

She says that many residents are experienced damages as a result of extreme flooding.

Landy, who claims the Greenlaw area has seen several tragedies over the past three years, established a GoFundMe account to support community members impacted by the severe weather.

The threat of flash flooding through next week, the National Weather Service said, though the coverage will be more scattered than widespread. 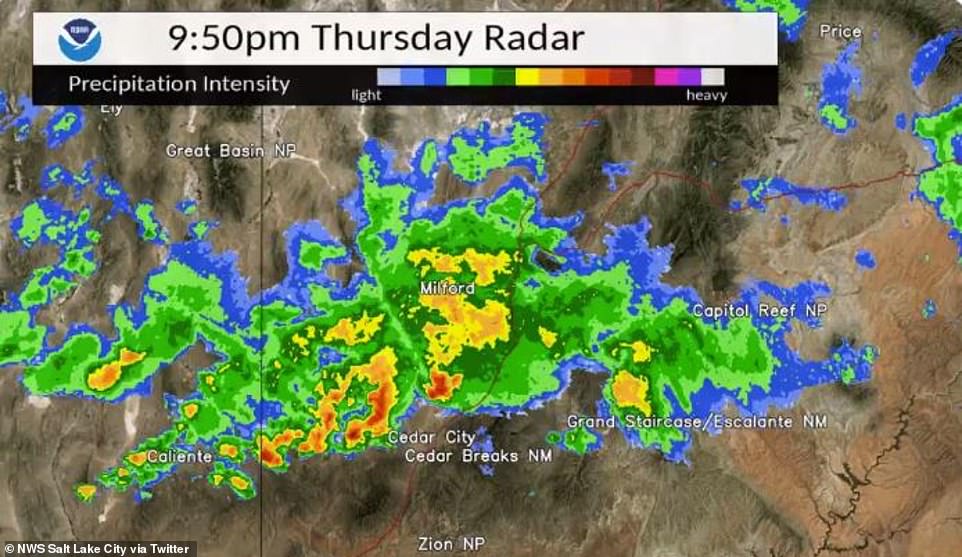 The National Weather Service says flash flooding is expected to continue this weekend and reminds citizens to be careful. The NWS says, with the exception of heat-related deaths, more fatalities occur from flooding than any other weather hazard

Officials warn residents to be cautious during this time as, with the exception of heat-related deaths, more fatalities occur from flooding than any other weather hazard.

Although the number of weather related deaths can vary dramatically from year to year due to conditions, the National Weather Service reports the 30-year average for flood deaths in the United States is 88. That compares with a 30-year average of 41 deaths for lightning, 68 for tornadoes and 45 for hurricanes.

Data also shows that nearly half of all flash flood deaths are vehicle-related.

Officials remind citizens that whether you are walking or driving, if you come to a flooded road you should immediately ‘turn around, don’t drown!’