A family tragically torn apart after their mother died and their father abandoned them, has been reunited for the first time in 76 years.

Shortly afterwards her youngest daughter Ruby died and the remaining five children were abandoned by their father and then taken into care.

One of her sons named Tom was placed into a Church of Scotland children’s home in West Lothian, along with brothers Frank Ian and Jim.

Betty, now 83, was sent to a separate home in the town.

Tom, now 84, returned to Dumfries to live with his grandmother when he was 15.

But Jim and Frank, who are now 78 and 80 respectively, were later sent to Australia under the Child Migrant Scheme in their early teens to work on farms.

The siblings attempted to keep in touch after being torn apart but found it was difficult to reunite as a family.

The Irvine family back together after 76 years apart (clockwise from top left) Frank, Betty, Tom, Ian and Jim

Ian – who died over 10 years ago at the age of 68 – and Betty, managed to find their way back to the town they grew up in once they were old enough and raised families there.

But after not sleeping under the same roof for 76 years, the family finally reunited at Telford Manor House and Mews at Beattock in Dumfries and Galloway for Tom’s 84th birthday on May 19.

Tom thought that he would never see his brother Jim ever again after waving goodbye to him before his move to the other side of the world.

‘It’s quite emotional actually. I still can’t believe it. It was brilliant, we had a great time.

‘Such a special occasion and this is the first time we have been together since 1942. It’s a memory I will never forget. We will be very close now.

‘I remember putting Jim in the bus and I thought I would never see him again.

‘I just wanted to see them.’ 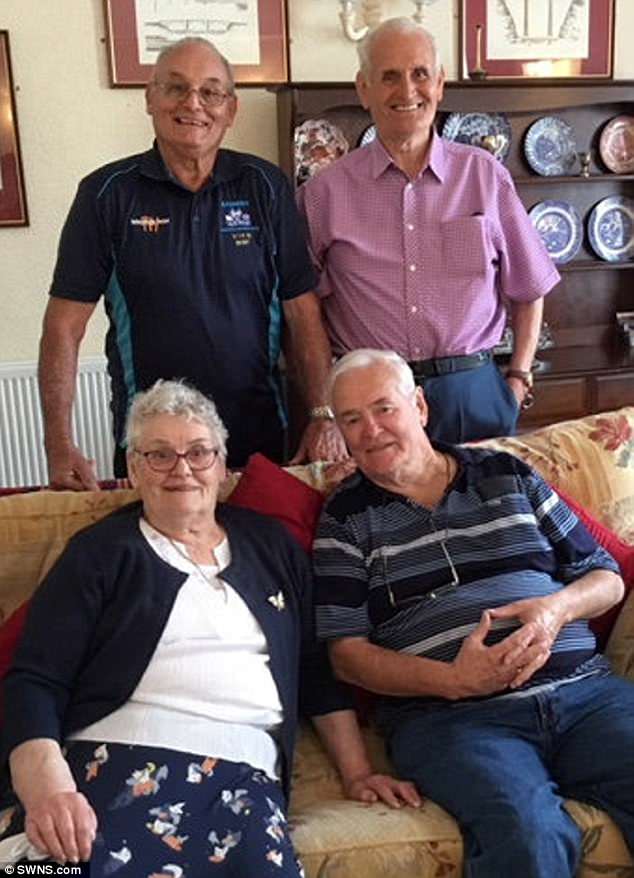 Tom travelled to Australia in 1985 to visit Jim but the whole family have not been together at the same time, until this past weekend, and had only kept in touch by writing letters.

Tom went on to be an apprentice plumber, served with The King’s Own Scottish Borderers during his national service, and retired after working at Imperial Chemical Industries.

And on the other side of the world, Frank ended up getting married and owned a farm.

For Tom’s birthday, he brought his sons David and Glen with him.

Jim joined the Australian Navy, got married and had two children which he brought to the occasion alongside granddaughter Alicia for the weekend’s celebrations.

Tom explained: ‘Previously Frank had come to visit but I flew out to Australia to be reunited with Jim. Thirty years I never saw him.